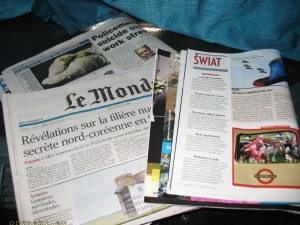 My journalist’ career began in my primary school’s newsletter “Trele Morele”. I’ve been also active with school media in my high school and so it was natural for me to start my adventure with studen’t press. I cooperated with student magazine “Semestr” for many years, but I was also no stranger to publish in other places, such as Relaz magazine. Then I became an IT journalist, writing about Linux and internet related stuff for Chip Special, one of the biggest IT magazines in Poland.

Since I settled in Scotland in 2006 I cooperated with several titles, publishing mostly in Polish emigree press and internet portal – among others szkocja.net, scotland.pl, razem.co.uk, Nasze Essex and finally I became a deputy editor of gazetae.com where apart from being a columnist in both Polish and English, I was also responsible for translations between Polish and English and also from Czech to both English and Polish.

Since I moved in Scotland I became involved in the transport industry, publishing some pieces in places like in e-trucker.pl or (in English) in Truck and Driver, I sometimes work with Polish trucking portal 40ton.net as well.

Today I write both in English and Polish and I am also a regular contributor to one of the biggest independent Czech language portals Britske Listy. My texts can be also found, among others, on the Visegrad Revue pages. I had also occassional bylines in some British titles such as The Times or Politics Home.

For over a year I’ve been a columnist for STV, where once a month I was writing a bi-lingual piece about all things connecting Scotland and it’s Polish community and recently I cooperate loosely with West Country Voices.

My personal page orynski.eu is an attempt to have all my previously published pieces in one place and also to provide my own place to publish some new texts independently.

And what am I doing with my life apart from writing? In Poland I studied at the Faculty of Physics and Astronomy at Wrocław University. In Scotland I become Master of Arts in joint Czech Studies and Central and East European Studies at Glasgow University. The title of my disertation is “Polish rock recaptures contact with reality – a picture of everyday life in the song lyrics of the 1980’s rock boom”. As you propably guessed, there is not much demand for specialist in my field on the job market, so I make my living working in the transport industry, but since transport is my other passion, I am quite happy with it for now, especially that for many years this job was taking me (and still on occassions is) to one of the most beautiful parts of the world…

In late 2022 I left Britain and now I am trying to start a new life in Helsinki.

I do also have a private life, but I want it to stay that way.

I am a sole author of all materials on this page (unless otherwise specified).