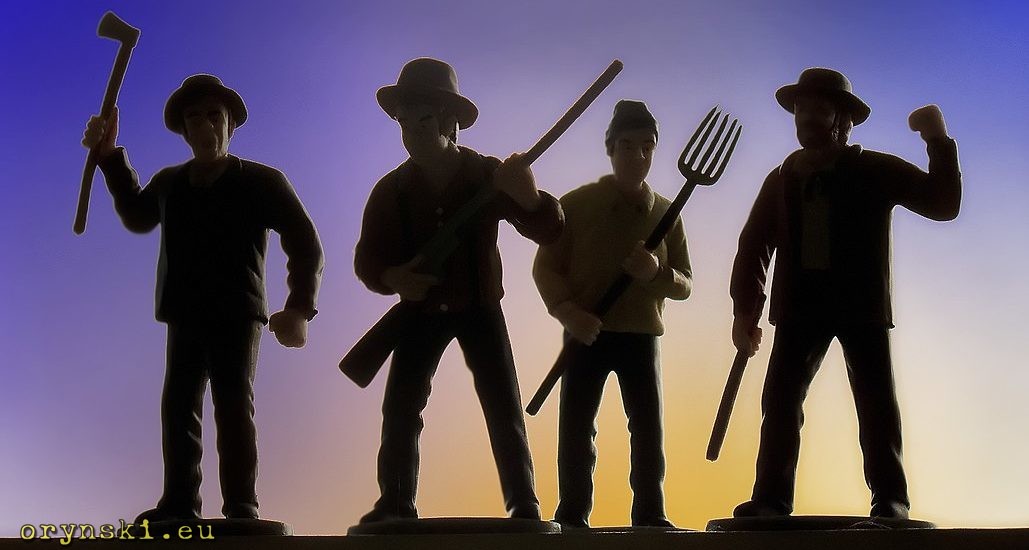 When the government promised new fire engines for the parishes that have the highest turnout in the presidential elections, everyone wondered what would happen if the biggest turnout would happen in the places that voted for the opposition candidates. And now we have a chance to watch that, as in Podkarpackie voivodship, traditionally known for being conservative and overwhelmingly supporting PiS (or, as other like to put it, for being a backward red-necks country). A small parish of Cisna, like a village of Asterix surrounded by Roman camps, had over 75% turnout and Rafał Trzaskowski came victorious. They received money for the promised fire engine, but also the Supreme Audit Office just happened to begin the inspection of the local fire brigade. Allegedly the inspection has nothing to do with the results of the elections, but somehow many Poles don’t believe in such coincidences any more.

Strangely enough, there is no inspection in the face mask factory in Stalowa Wola, that, if we believe Andrzej Duda, along with some other sewing manufacturers, was supposed to deliver 100 000 000 masks by the end June. Probably because it does not exists, and, if we believe experts, it won’t, as the expectation to create a factory capable to produce 29 000 000 millions of face masks per month in a matter of weeks was, from the beginning, unreal and impossible.

But PiS does not bother with such trivialities as wondering if something exists or not. In their legislative frenzy, during which they change every law possible under the pretext of tackling the COVID-19 pandemics, they voted an amendment to the legal bill that does not exist, as while there was some legal work done to introduce it, it never came into force…

Sometimes, though, the things that do not officially exist work. The news headlines are full of information about the arrest of Sławomir Nowak. This former politician of PO, whose political career ended abruptly in 2014 after he “forgot” to introduce luxury watch in his asset declaration (eh, those were the days, when politicians actually had to face some responsibility for their wrongdoings), has been allegedly involved in some corruption scandal in Ukraine where he worked since 2016. Rumours are circulating that evidence against him was obtained thanks to Israeli spying system Pegasus, which government has obtained a few years back. Using this system to spy on Polish citizen is highly controversial and the fact that Nowak was advising Trzaskowski’s election team rings further alarm bells, as while his phone was tapped and spied on, it might also mean that the government has gathered crucial data on the opposition politicians and Trzaskowski’s election strategy… Some opposition politicians wonder if the fact, that Nowak’s case has been dragged for so long despite the fact, that investigators had everything they needed to act from Ukrainians last year could be really just another coincidence?

Back to things that exist, not exist or are not what they seem to be. For example, the election protests are investigated by those judges of the Highest Court, who are considered its judges by PiS and not its judges due to being illegally appointed by everyone else. So far all protests were either rejected or deemed irrelevant.

Some things exist, but nobody seems to know when they are. This is the case of Poczta Polska, which lost all of its shares. Luckily, those weren’t bearer’s instrument, so the Polish Post still belongs to the government and not to whoever found those documents, but still, this was a bit embarrassing.

But there are also some things, that government wishes don’t’ exist, and yet everyone knows where they are. Just as all those voting ballots printed for those ill-fated elections that were to take place on 10th of May. Gazeta Wyborcza went undercover and managed to sneak out the box of those from the warehouse where they are stored before being milled into the pulp. Even opposition MP’s were (against the law) prohibited from inspecting that facility. Minister Sasin, the person responsible for that failed attempt to organize illegal elections – in other words, for wasting 70 or even 100 millions of Polish złoty, as estimates vary, since the government refused to provide any information on actual costs of that exercise – is outraged with that robbery. Which is quite ironic, as since the ballots were to be recycled anywhere, the value of the stolen box is estimated at about 0.60 zł.

But don’t worry, Sasin won’t be asked to pay back all those millions he wasted. His pals made sure of it. As a part of COVID-19 tackling legal initiative (as everything in Polish law is now done that way) the law was changed, so the Post can be reimbursed for the cost of this disastrous enterprise. So nobody now can accuse Sasin of acting to the detriment of the company, as it won’t be at loss. Acting to the detriment of the taxpayer is a different matter.

But the police has more important things to do. In Kraków, someone painted a mural inspired by Banksy’s famous girl with the balloon. Expect that the person who loses heart-shaped balloon this time is Jarosław Kaczyński. I wish the police was always so keen to tackle the issue of illegal graffiti, but I am not naive. They are interested only because this one is political.

Apart from that life goes as normal and Poland is slowly slipping back to the middle ages. For a few days, Poland lived with the police search for a man and his puma who went into the hiding, as the dangerous animal was, by the court ruling, to be taken away from him and placed into a ZOO. He and his defenders claimed that separating such a loved animal from its beloved owner is the act of animal cruelty. But, as usual, the truth was much less romantic: the man, who purchased puma from some breeders in the Czech Republic, registered himself as a Circus to circumnavigate the laws preventing people from keeping wild animals at home, and the beast was not, in fact, a cuddly kitten and beloved pet: it was living in a small cage, wearing discipline collars and the owner was making a fortune hiring it for photoshoots and other similar events. The animal finally ended up in a ZOO and the man promised a legal fight to get it back, asking for the financial support on various crowdfunding portals. It soon emerged, that he amassed a huge amount of money in several parallel fundraising stunts while his lawyers work pro bono. He also still refuses to pay rent or bills for the property he illegally lives for the last few years or to pay people to whom he owes money. Including people who take care of the other animals he abandoned…

But this is one man abusing a wild animal for money to have an easy life. What about the whole government of people who try to facilitate the abuse of women? Withdrawing Poland from Istanbul convention is not a new idea for PiS, known for that it’s activists often happen to be wife beaters like this local councillor or this MP. Back in 2019, they tried to force a law according to which domestic violence becomes a crime only if it happens more than once. Back then they backtracked, but back then, they were still worried about public opinion…

But now public opinion has changed. Today the pretext for withdrawing from Istanbul Convention seems to be the fact, that in there the term “sociocultural gender” is used. And gender is bad because it is somehow related to LGBT. Most Poles probably don’t get the details. But it does not matter, who needs to look into details. The message is clear: LGBT is bad! Grab the pitchforks, let’s get them!

And the sad thing is that that last sentence is not that far from the truth. A young gay man in the little village in Podkarpackie voivodship is afraid to leave home. After the village learned about homosexuality he is hounded. He is refused to be served in a local shop. He was a victim of countless verbal and physical attacks. Someone tried to poison his dog. A crowd of locals regularly gather outside his house and shout abuse at him. Police were not very helpful, merely lecturing him that he can litigate people in private. He was at suicidal, in terrible mental condition. Luckily, he is now getting help from LGBT activists.

And you know what is the scariest thing? I asked a local journalist if she knows more about the case. She answered “it’s done now”, and I got scared about what she meant about that. For the moment before she explained that he’s getting help, I was afraid that he finally killed himself… I shared that first thought with her. Her answer was “No, not yet”.

This is the state we’re in now. This is Poland, 2 decades into the XXI century. And those are conversations we are having.

This piece was written for Britské Listy
Illustration: Robert Couse-Baker, CC 2.0 (via Wikipedia)