Yesterday Jarosław Kaczyński published his speech to the nation. He babbled for six minutes in the style that could be only described as crossover between Wojciech Jaruzelski’ announcement of the introduction of the martial law in 1981 and Władysław Gomułka’s speeches during anti-Semitic purges in 1968. Basically the message was: It’s our duty to defend Poland from Poles, otherwise Poland as we known it – dominated by church – will be gone. Well, at least we know he understands what’s going on. Ending the part of Polish history when Poland was dominated by the church is exactly what Poles want.

Today he had another speech, this time in parliament. In that speech accused the opposition of inspiring the protests: “You are destroying Poland! You put many lives at risk, you are criminals, YOU ARE CRIMINALS!” – cried Kaczyński from the rostrum. – “You will answer for that!” – he ended after some grammatically incorrect part that made no sense.

As if that was not enough yet, he later made yet another speech when pay rises for the doctors and nurses who work with COVID patients were discussed. This time he accused the opposition that by proposing such move, they are deliberately trying to destroy public finances, in order to destroy Polish state. “Perhaps Janusz Korwin-Mikke was right” – he ended. In case you don’t know who Korwin-Mikke is, he is an ultra right-wing anarcho-capitalist, who just recently proposed to solve the abortion issue by applying free market rules to it: according to him women are stupid for wanting abortions as they could sell babies for $25000 a piece. You can see him proposing that solution during online Q&A session here (with English subtitles).

Reaction of other PiS polticians.

Przemysław Czarnek, newly appointed Education Minister basically said that protesters are Satanists. Other PiS MP claims, that only extreme leftists are protesting because they are under influence of Netflix and TikTok, dominated by liberal-left worldview.

Prime minister Morawiecki has disapeared completely from the public view. And so was president Duda. The internet users were trying to find where he is or what he might be up to, but the only discovery they made is that he has a feet fetish. Finally he came out and said few round words, proposed some kind of foggy “compromise” and assured that he “understands women”. But apparently he did not, as his own wife and daughter don’t believe, that women should be forced to give birth to defected fetuses and disabled children. Maybe their message was too diplomatic, maybe they should stick to “wypierdalaj” like pretty much every other woman in the country?

Reaction of the church and the right.

Kaczyński’s “call to arms” has not been met with as great response as he hoped. Yes, the neo-fascist organisation ONR announced that they are forming brigades of “political soldiers”, some other right wing militias has already been seen on the street, but even the football hooligan’s community didn’t really fell for Kaczyński words.

Football fans across the country from Białystok to Wrocław made it clear, that while they will protect churches, they are not too keen of becoming defenders of PiS. General message was that “a true football hooligan protects women!” (perhaps with the exception of those, who are also left wing activists).

No new reactions from the church, unless a priest from Wrocław shouting at protesters through a speaker “Go apologize to your mothers for that they did not scrubbed you out with the coat hanger!” counts.

Reaction of the uniformed services

The voices coming from the police are ovewhelmingly pro-protest. Many of the officers are annoyed with the fact, that they are tasked with protecting churches or PiS offices, while the real criminal run free, as there is noone left to chase them. Many city mayors – including the mayor of Kraków – are fuming because the city police, that usually responds to local councils, has been put under command of the state in order to ease the battle with the pandemic, and now they are being ordered to guard offices of PiS and churches.

Today was the day of the biggest protests so far. The women’s strike announced by leaders of the women rights movements didn’t really worked well, and not that many women skipped work. But studends did, as many universities decided to cancell all classes on Wednesday or simply suggested to their students what they should do, as a dean of Socio-Economic Departament of University of Łódź, who wrote “I’ve received many questions about tomorrow’s classses. My answer is: ϟ” (the lighting is a symbol of the protest).

But in the evening the whole country took to the streets at unprecedented scale.Here is the map with all protests in Poland and abroad that took place so far.

Of course the bigger cities saw the biggest numbers of protesters. For example in Poland’s fourth biggest city – Wrocław – with the agglomeration of just under a million of residents – at least 65 000 want PiS to fuck off and this is allegedly very cautious estimate, as there were multiple events across the city: marches, piquettes, a special edition of the cycling event Critical Mass, cars blocking the streets or motorcades driving around the town and so on. One police officer asked for the estimated numbers has been quoted saying “they say it’s 65 000, but it has to be much, much more. I’ve never seen anything like that”.

The police, apart from guarding PiS headquarters, stayed behind and only helped with the traffic, for which they got a round of applause. Unfortunately some thugs, who answered Kaczyński’s call to protect the churches and kept their watch there, got bored – as nobody was interested in attacking churches, as the common agreement amongst the protesters was to ignore them in order to avoid escalation of violence – and decided to simply attack some random protesters on the streets:

Clashes with right wing militias have been reported in several places across the city.

Apart from that the evening was quite peaceful, despite the scale of the event.

But of course the big cities were not the only places when people took to the streets. And in the

more rural areas the scale of the protests was unprecedented as well. In Sanok, a town of less than 40 000 located in the south-east corner of Poland, considered widely to be a bastion of PiS and a Polish equivalent to a Bible Belt, more than 2000 gathered to protest. 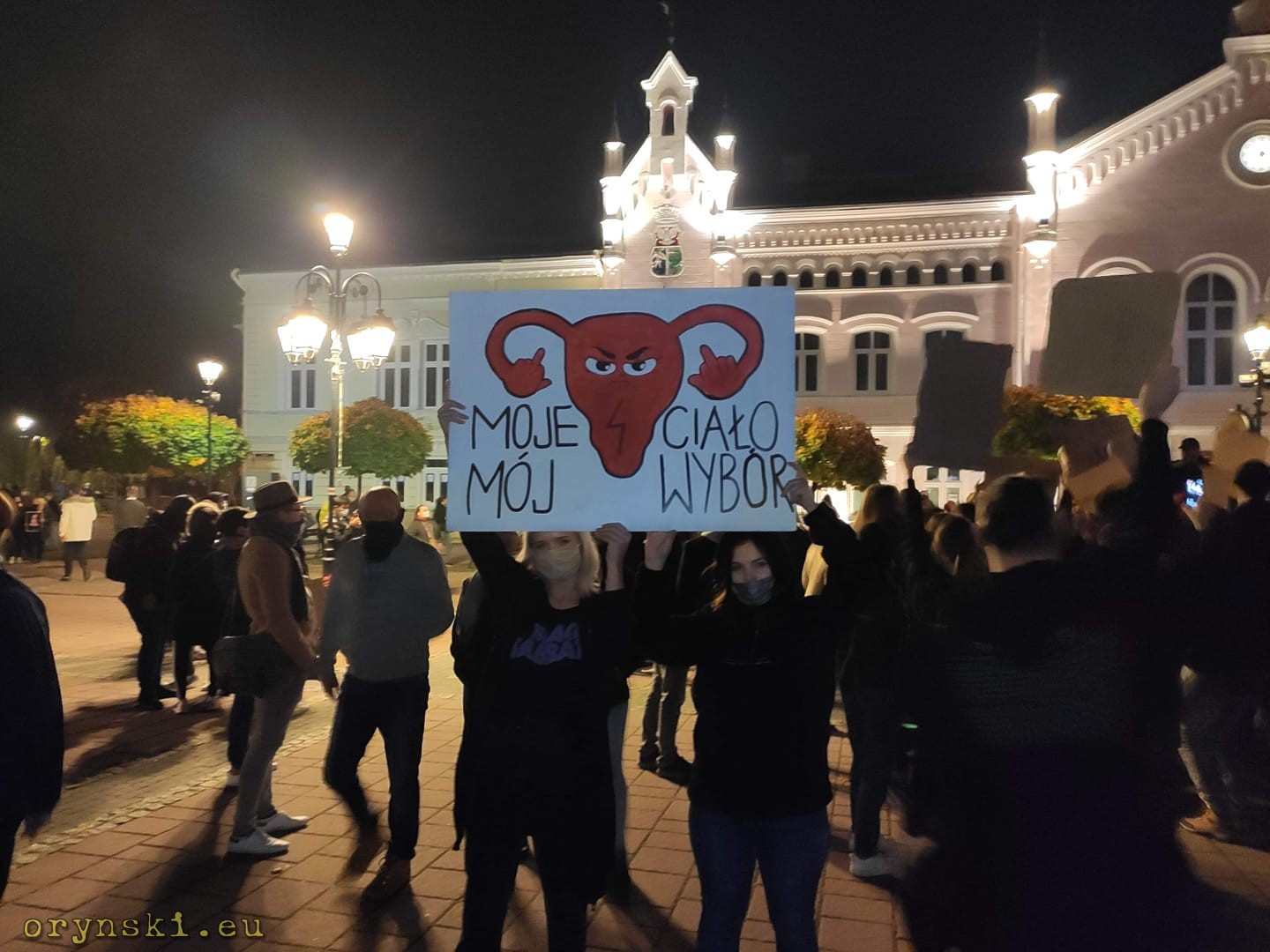 Stream from protests in Sanok can be found here.

According to local journalist Martyna Sokołowska, the protesters there were also met with aggression from the right wing thugs: a group of them tried to attack people displaying LGBT related emblems or flags indicated to them by their colleague who mixed with the crowds.

But even the tiniest villages saw their share of the citizen’s anger. In Wetlina (population: 307), a small mountain village in Bieszczady mountains, a group of brave people took to the road.

As pointed by, again, Martyna Sokołowska: it’s easy to protest in a big city, where you are just part of an anonymous crowd. But to go out in a tiny village where everyone knows everyone requires exceptional bravery.

– Illegally elected judge of the constitutional tribunal Justyn Piskorski who participated in controversial ruling and is also a lecturer at the Adam Mickiewicz University in Poznań was asked to quit his job by his co-workers. This move is supported by a online petition signed by thousands.

– Krystyna Pawłowicz, former PiS MP and now a Tribunal judge as well has been approached by Oko.press reporters. She called police and told them that she’s being harassed by “aggressive bums”, so now she got a government limo and protection “for the good of the state”. On the first day the driver of the car she was in caused an accident by driving under a tram. If you ask me, I do understand that good of the state sometimes needs sacrifices, but I think throwing her under a tram was a bit too much…

– a man who drove his BMW through a crowd of protesters causing some injuries (see more here) has been found to be an agent of counter-intelligence agency, who’s career significantly speed up under PiS government. He will not be charged, as according to the prosecution it was “just an ordinary traffic accident”. Meanwhile his boss Mariusz Kamiński makes threats to the protesters for their “attacks on the places of worship”.

– new poll shows that if election happened today, PiS and it’s satelites would get only 26% of votes, so even with Konfederacja (polled at 8%) they would be unable to create a government.

– and last but not least the health workers report, that the system is already collapsing. “Someone called ambulance at 9am and we only got there at midnight” – says paramedic from Legnica. Perhaps Kaczyński lost his nut already and is not scared when watching those mass protests, but I am pretty sure that doctors and nurses are…

This piece was written for Britské Listy