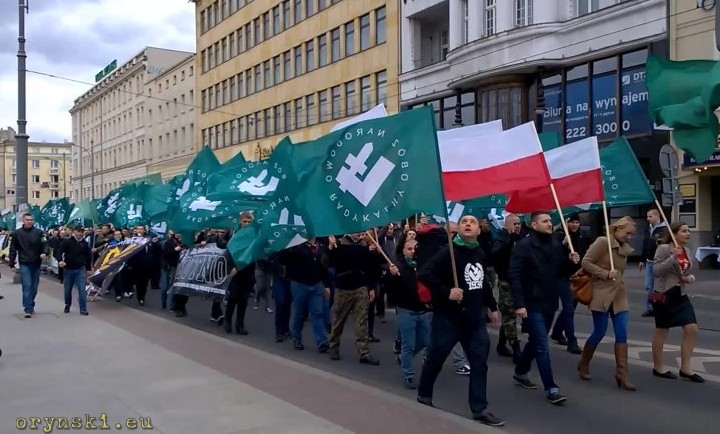 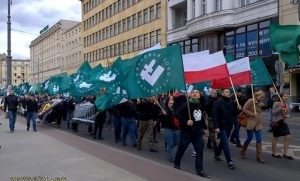 The situation that had place in Warsaw is really a sad illustration of the current anti-migrants tensions in Poland. On the huge district heating pipe a mural (or rather “rural” – from Polish rura – pipe) was painted. It depicted kids of all nations and races holding hands. Soon the painting became a target of vandal activities – faces of children of colour became covered with a white paint and a vulgar anti-migrant graffiti emerged. A decision was made to restore the painting, but this time faces of all children are white. This is a symbolic defeat in the fight against racism.

But this is not the only recent case widely commented on social media that shows how Polish institution give up to racism. In another situation a man, Polish citizen with a darker tone to his skin thanks to some distance Georgian heritage was sitting in the cafe when a class of kids with their teachers entered. They saw him speaking English and had burst into tears, saying that he is a refugee and they don’t want to seat next to him. In a scandalous reaction, teachers approached man to explain that “Poles don’t like foreigners so kids are afraid of him” and to ask him to leave…

The levels of hate rocketed sky high in the political “discussion” as well. Protesters associated with KOD, or in fact any opponents to Prawo I Sprawiedliwość politics are called “traitors” and compare them to Targowica Confederation. This is actually quite ironic, as the original Targowica was established to oppose introduction of the Constitution of 3rd May 1791, it was supported widely both by the Catholic Church and played Poland’s fate into hands of Russia…

The interview with a PiS MP in a Catholic Radio is something less funny. In this interview Bernardeta Krynicka when talking about EU investigation into the Constitutional Tribunal crisis, said that “grassing one’s own country to the foreigners is a treason, and treason should be punished by hanging”. When shocked interviewer tried to soothe her, she went even further, enforcing her stand. Interview was then published by the local internet portal: http://lomzynskie24.pl/2016/05/zdrajca-powinien-wisiec-na-stryczku-wywiad-z-poslanka-bernadeta-krynicka-w-radiu-nadzieja/

Such threats are nothing new, as they were displayed in a banner during major football game, but them coming from an MP takes things to a completely new level. And that remains an important fact even if Ms Krynicka is an idiot, as she tried to prove when during proceedings of the health commission she demanded that concience clause rights were given to physiotherapists so they can refuse to provide rehabilitation services to women who use intrauterine devices.

The spiral of hate spins out of control – it might be just a coincidence, but it is worth to mention that a bomber who planted an explosive device in a crowded bus in Wrocław (thanks to the heroism of the driver who removed it from the bus only one passer-by was hurt) allegedly had also very radical right wing and anti-immigrant views.

Meanwhile the state seems not only to do nothing about this but condone such behaviour. And Poland had a problem with it long before, once upon a time a judge ruled that “swastika is a Hindu symbol of luck” and thus did not sentenced accused of painting racist graffiti in Białystok to any punishment for painting swastikas on the walls of homes inhabited by migrants. Stadium Hooligans, praised over the years by Jarosław Kaczyński as true patriots, today organize regular marches with torches even in such holy places like Sanctuarium in Jasna Góra. Several priests are happy to cater for the needs of the racist thugs, calling for them to lead the Christian crusade against Islam.

Recent changes to the law grants the government virtually uncontrollable investigation powers, and PiS fear of mass protests can be visible in such actions like establishing “territorial army” that, “could be issued with machine guns to deal with anti-government actions” or raising over two metres high fence around the parliament building.

At the same time, police brutality is not dealt with properly – recently there were several cases reported of policemen abusing their power – just few days ago a young man in Wrocław was arrested then allegedly beaten to death at police station. Police claims that he died after a taser was used on him due to being on drugs, but post-mortem pictures show terrible injuries to the head of the victim. This has lead to few day of riots near the police station, yet no committed response from the government was heard. Perhaps it was because the Minister of Interior was busy supervising police in Gdańsk where a daughter of local PiS activist was detained after she had attacked for the second time a police protecting a march of LGBT activists. According to Minister Błaszczak “detaining a women by putting her on the ground and tying her hands behind her back is unacceptable”. This “barbaric case of police brutality” brought him to the conclusion that further actions are needed.

Below, for everyone to make his or her own main, a full footage from detaining of the girl by the police, where she can be seen smiling, joking and giving interviews to the media:

The above developments even further divided Poles. Harsh words are being spoken on both sides (although from PiS side amount of venom spat by it’s supporters is higher by the order of the magnitude). But is that genuine hate, or is it fuelled for some particular reason? A popular theory emerging amongst Poles predicts, that PiS, knowing that they have no chance to remain on power by democratic means, strives to kick Poland out of balance. Then, quoting new laws and terrorist risk related to the World Youth Day, one of the biggest Catholic events in the world that is scheduled in Kraków this summer, PiS might introduce some kind of state of emergency and use it to crash the opposition. Utter absurd, right?

…or is it? Recent interview with Krzysztof Szczerski, advisor of the president Duda puts such idea in a different light. He claims that president gave the parliament a chance to solve crisis related to Constitutional Tribunal, but if it would be unable to come to some kind of compromise, president “will take toys off their hands, sends them home and will rule on his own”. According to Mr Szczerski opposition should be grateful to president for that he hasn’t done it. Yet.

Meanwhile the rulings of the constitutional courts still haven’t been published and legally elected judges still weren’t sworn to the office. As it came under focus of the EU and international organizations, it remains a trouble for PiS and frustrates the opposition. Only one man is happy – and he has his office in Kremlin.

Since this article was published on Britske Listy yesterday, I’ve learned about yet another bomb – this time some anarchist activist tried to blow up a police car.  Today numerous bomb alerts were raised and several public building across Poland had to be evacuated. Incidentally, two major publicists – Marcin Celiński of Liberte and Gazeta Wyborcza’s Wojciech Fusek suggested, that those bomb alerts might have something to do with the new legislation prepared by PiS. And now I don’t know – should I be happy that if I went cuckoo and see some crazy conspiracy theory quite plausible I am in a good company, or should I be worried, that this “conspiracy theory” might turn to be quite plausible one after all?

What can be expected in Poland in the oncoming election year?

Do it yourself
Britské Listy Poland politics society