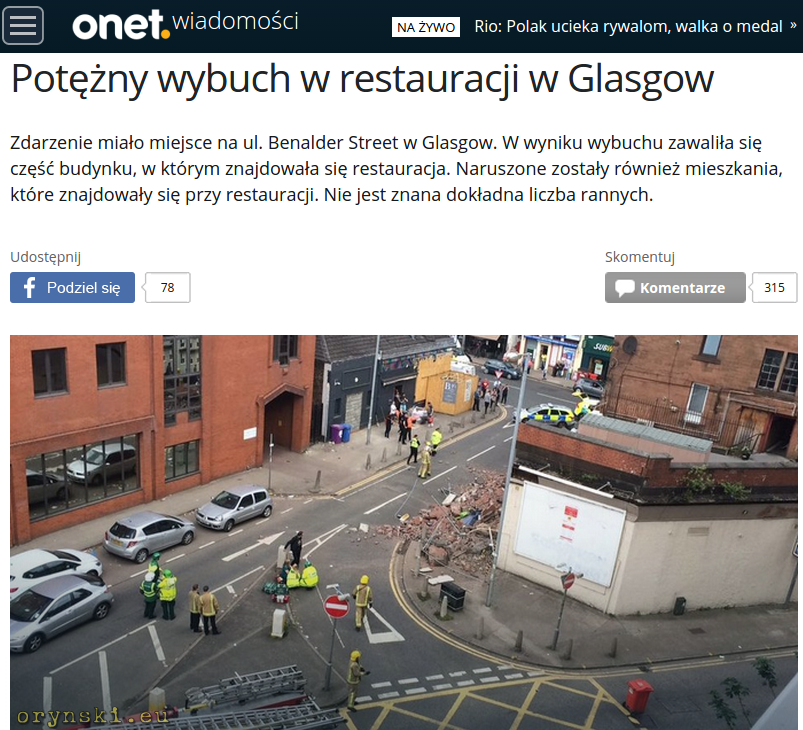 It turns out that you don’t have to do much. It’s enough just to place a suggestion, slight reticence, perhaps even without any wrongdoing in mind, and the shit surfaces immediately. Let’s see how it works on the case study of a news story on the Polish portal onet.pl regarding an event that has happened today in Glasgow.

I have to say I am quite impressed with onet journalist’s creativity. Not only explosion, but also casualities and destroyed homes… But, to be fair, maybe it’s not their doing. Maybe they just translated the story from one of British tabloids. But while Britons already changed their story to reflect the truth, at 17:59 British time Onet.eu still reports about mighty explosion.

The comments under Polish articles emerged soon. For those, who suspect who’s behind the explosion, those comments are just confirmation of their fears. Let’s take a look at few of the best rated ones. Certain Vooyek does not say anything ex plicite, but he does have his suspicions. After all, Western Countries are punishing those, who oppose islamic terrorism:

Certain Rebe leaves less space for speculations. For him it’s just another confirmation of his beliefs:

Małgorzata is not at all surprised. She knows perfectly who the perpetrator was, despite that you-know-who in desperate attempt of sweeping the matter under the carpet are going to write that he was mentally ill:

She is supported by another commenter, who demands information. But that has to be “true” information (which propably means, one that confirms his suspicions) if he is to believe them!

Luckily, he is soon provided with the information he demanded:

He is suported by yet another Pole who seems to be struggling with interpunction of his native language. Despite the obstacles he managed to provide us with a smart observation related to recent Brexit referendum:

One can also see deeper analysis on that subject:

By the way it turns out that British right wing narration that portrays Polish emigration to Britain as poor people washing dishes for pennies and living a 10 per flat sells well in Poland as well:

A certain Huzare tries to see positive side to Glasgow terrorism act:

Commentators are proving superiority of the Western culture by spreading Christian compassion and mercy. That being said, the fact that England and Scotland are not the same countries seem to be too hard to grasp for some of them:

Similar level of mercy is shown by the internet user using nickname “Let’s pray for that country to cease existence, hahahahahahahaha”:

And what is the truth about events in Glasgow?

Let’s have a look again at the picture from the onet article. We can see that the pub is located in one storey building. It’s flat roof is surrounded by a small wall. As you could see, at the bottom of that small wall little trees started to grow. Those trees, ignored by the factors, grew to be big enough to damage the wall with their roots and so it fell to the pavement below. According to BBC gas engineers turned out to the site:

but this is completely standard procedure – they have a duty to check if the gas network remains safe. BBC informs as well that ambulances also turned up, but they found bobody injured. According to STV people from surround buildings had to be evacuated until the emergency services had a chance to check everything and confirm that the location is absolutely safe.

This is confirmed by a Glasgow Pole, Mirosław Grzybowski, who lives nearby. He placed a comment trying to correct information provided by Onet. According to him, other commenters answered with following words: “Get lost, you propagandist vagabond! Nobody asked your opinion. Go, search for those more stupid than you! Brainwash them and encourage them to love your “explosive” company!”
At the time of writing this article those coments appear to be deleted.

So there is one question remaining: was that onet “journalist” who tuned up a bit information provided by British media with all those “facts” about enourmous explosion, damaged flats and casualities trying to spin up the scaremongering of Poles with Muslim refugees? Or it was just a plain stupidity and desperate attempt to change a completely insignificant story in a succesful click bait?