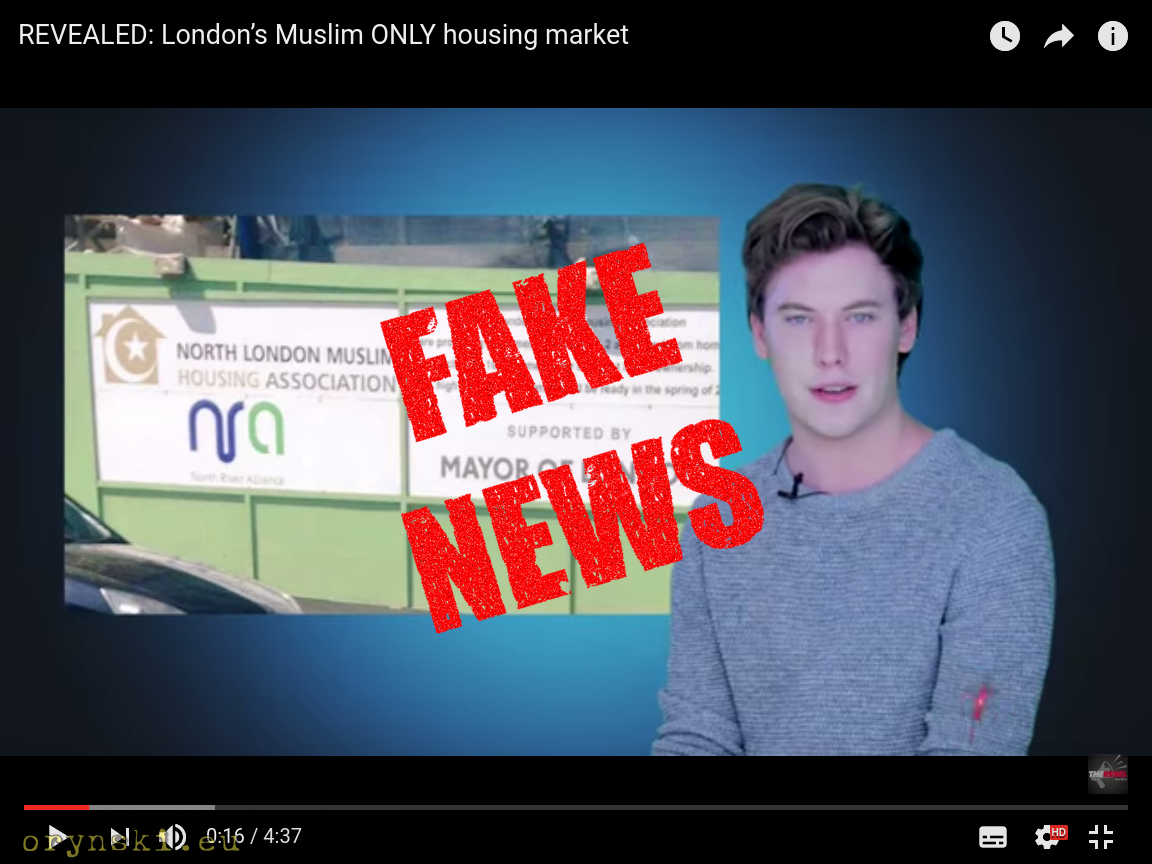 Frankly speaking, I face a dilemma here: should I tackle this rubbish on, generating more visits to the right wing propaganda sites, or should I ignore it? I’ve decided, that from time to time I will do some little debunking of the right wing rubbish. Of course I am not that naive to think, that they will change their mind, for them snakes have legs and always will have. But I believe that it’s worth to show, how propaganda works on a real example.

Here is a little youtube clip, that popped out here and there around my social media. It seems to be quite popular both in UK and Poland. It is one of those, that claim that suggest that there is some kind of conspiracy, or in best case imbalance, that will result in ousting white man from Europe and replacing him with Muslims. This time the claim is, that non-Muslims are discriminated on British housing market:

How much this clip is worth? Well, before we even start, it’s produced by “The Rebel Media” and it quotes an article from Daily Star. Let’s be honest, Daily Star is low even for British Tabloid. While the major colour papers got rid of nudity, or hide it in the little corner on third, or last, page, Daily Star is full of tits even on it’s cover: 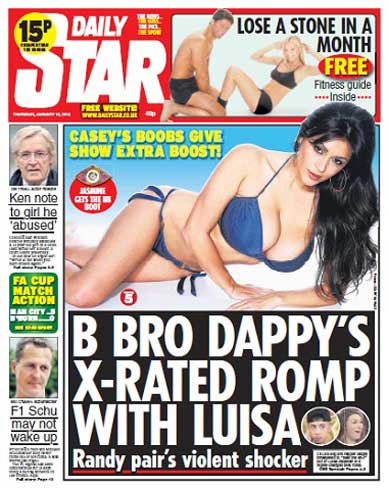 That might be a giveaway, so if you suspect, that this might not be the most reliable source ever, you are not the only one to think so, as this is pretty much universal knowledge.

But, as anti-vac crowd is known to say “reliability of the source is not relevant, it’s the information that matters”. Therefore let’s look into how the work of Caolan Robertson, a rebellious “journalist”, stands up against reality.

I don’t know, Caolan looks young to me, so he might still be living with his mum, but everyone who ever had anything to do with UK housing market would instantly notice, that he mixes up, perhaps on purpose, three things.

Let’s look into each of those points separately:

Housing associations are supervised by local councils and institutions such as Chartered Institute of Housing. They have to operate within guidelines, which demand that they act with the principles of diversity and equality in mind. That means that no ethnic group can be discriminated against, but also that they should prevent creations of ghettos, inhabited only by people of one nationality or culture.

In practice it means that if I would apply for a flat in the area already dominated by Poles, as a Pole myself I will be informed that there are no flats available for me, even though a person of Pakistani or British origin might be housed there. Same applies to Muslim willing to get a house in a Muslim dominated area or white British person that want to live somewhere, where ethnic minorities are under-represented.

This mechanism operates not only on the level of single tenants, but also when it comes to housing associations. Those can be started by pretty much everyone, so there is nothing strange in that you could find ones that cater mostly for the need of Chinese community, others, that provide flats solely to Scottish veterans or run by Christian associations. It’s a local council’s job to ensure, that also at the level of housing association equality and diversity will be maintained. They might achieve this goal by issuing building permits in a patchwork-like pattern, or even by organizing exchange of flats between different housing associations.

Moreover, local councils can also force commercial developers to participate in providing affordable accommodation, for example by issuing building permits on the condition, that certain percentage of newly built flat will be available to council, or offered at reduced price to people of lower income.

So when it comes to this aspect, picking on the Muslim Housing Association and portraying it as an example of discrimination of non-Muslims is an obvious manipulation.

I think everyone, including most radical Social Justice Warriors, can’t imagine sharing a house with people, who are on a completely opposite scale when it comes to beliefs, way of life or everyday habits. Even if we aim to tolerate everyone’s else opinion or lifestyle, we tend to associate with people similar to us. Even Caolan himself admits, that there is nothing wrong with it, but then he quickly starts ranting again, trying to prove, that such behaviour is an example of leftist hypocrisy.

Well, I might be living in the UK only 12 years, but I moved around quite a few times and I saw hundreds of adverts. Search for Muslim flatmate is actually nothing radical. Let’s remember, that Muslims are obliged to observe Ramadan, during which they have to fast from dawn till dusk. The situation, when hungry Muslims gets home from work and find his flatmates stuffing themselves with pizza over a glass of beer might be a little awkward to everyone involved.

Back in the time when I was still sharing flats with strangers, I saw people seeking for flatmates who don’t’ smoke, or, on the contrary, will tolerate smoking inside. I saw people looking for animal lovers, or expressing their categorical objection against keeping even the smaller pets. I saw people who expected to share house with someone, for whom Christian values are important, or with people, who have nothing against LGBT crowd. They were looking for someone quiet, or hoping to find fellow party animal. And so on, and so forth. Nobody seemed to have problems with that, and nobody was making any fuzz. This is just how free market works, right wingers should be happy.

I have to admit, I never saw adverts seeking specifically white people, but neither I heard about anyone seeking flatmate of any other skin tone.

So here again, all what Caolan said is simply a cheap manipulation.

Now, let’s see to the crème de la crème of this clip: “the investigative journalism” bit about social housing.

At least they tried, I give them that. They called certain housing association twice, pretending to represent two different people in a need of a new flat. Basing on those two samples, they made a conclusion that non-Muslims are discriminated against. But were they right to do so?

It is worth pointing out, that the first caller informs the person on the other side, that he is looking for a flat for his neighbour. The use of the word “neighbour” is very important, and I will get back to it later.

In this case, despite they made it very clear, that the neighbour is not Muslim, they received a clear answer that while the housing association caters of people of all ethnic background, at the moment they don’t have any flat available.

During a second call, the caller pretended to be a girl that just broke with her boyfriend and has nowhere to go. I am not a native speaker, so don’t quote me when it comes to recognizing British accent, but the girl does not sound like a Muslim girl to me. Nowhere during the conversation does she states that she is a Muslim as well. She asks for a flat in Whitechapel and is informed, that the housing association in question operates in South-East London only. She then asks another question:
“Do you recon, if I was to move to that area, do you think it would be easy for me to get in touch and see if I could get somewhere around there?”
Please note, that question is constructed in such a way, that it is hard to establish if by “that area” she means Whitechapel or South-East London. This is probably, why we can see that the lady on the other end is initially slightly confused, but she gives the answer anyway, informing that it would be possible if she applied through council.

This is sufficient for our manipulative Caolan, for whom this is a final proof, in your face, leftist: a white man heard “NO” and the Muslim girl heard “YES”. But as you can see, this is yet another manipulation: both callers heard “NO”, but for different reasons. The former was informed, that the association cannot offer anything to him at the moment. The latter heard, that the association do not operate in her preferred area at all. Only then, she asked the next question, and she was informed that she MIGHT BE ABLE to get a flat, but she has to apply through council – which could give her a flat from completely different source, so this in no way confirms that they would offer flat to a Muslim girl after refusing the same flat to white guy.

But there is another level of manipulation here: remember, that the first man in need of a new flat was described with a word “neighbour”? Well, I am not a native speaker again, but in my book, a neighbour is someone, who lives next to us, so by definition has somewhere to live. Meanwhile the second caller pretended to have nowhere to go and informed the lady on the other end, that she is “kinda homeless”. As a homeless person, she will be treated with the highest priority, and this is the most important reason, why she could be offered a place to live while a neighbour of the other caller would have to wait. But she was not offered a place to stay anyway, so the whole “journalist provocation” is worthless.

Of course, one could conduct this experiment in much more reliable way. If both callers pretended to be people in the same circumstances and the only difference between them was religion, then it could be worth something. But even then, if the Muslim was offered a place to stay and non-Muslim wasn’t, it would not mean, that white British people are discriminated against. A single Muslim girl, who just broke with her boyfriend could be considered higher risk – we have remember that there are problems with so called “honour killings” etc. Also, emergency housing can mean a place in House of Multiple Occupation – in that case, again, the social services try to accommodate people in a way that would help to avoid potential conflict. So it could be possible, that there was a place in a flat suitable for a Muslim, but there was not in a flat suitable for non-Muslim.

In any way, the most important point of this video turned out to be a double-stacked manipulation.

Caolan Robertson ends his rant with a side note. He claims that he was desperate to find an advert where someone was looking for a white or Christian person and he failed to find even one, despite enormous effort on his side. Well, as I mentioned before, it would be indeed hard to find a landlord, that is looking for the people of certain skin colour, but when it comes to Christians, then a claim by aspiring journalist, that he could not find any, is a bullet fired in his own feet and a total professional failure:

Let me google that for you, Caolan.

P.S. Am I the only one to notice, that Caolan Robertson is yet another right-wing youtuber, that looks as a Boys-band member, who just spend a whole afternoon having his hair, eyebrows and make-up done? Why it is so important for the right wing propaganda industry? Might it be the case, that it’s not only their views that are taken straight from those dark times nearly a century ago, when bunch of perfectly handsome Arian boys were spreading rubbish about national minorities in their country?

See also: How anti-Muslim hysteria is being spinned up in Poland

Graphics: Daily Star Cover, Youtube Screenshot.
FAKE NEWS stamp is public domain and it has been found at Pixabay.