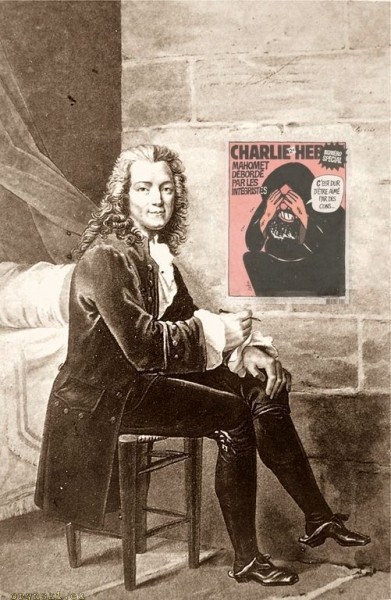 Recent atrocities in Charlie Hebdo yet again shaked our sense of security and provoked discussions: some call for revisions of our relations with Islam, other – including French president François Hollande – argue, that the attackers had nothing to do with Islam. It is important that while discussing the fanaticism, one does not loose his own rationalism and common sense.

Where do radicals come from?

One can like Star Trek and watch it whenever bumps on it on TV. One can be great fan and chain-watch all series from special edition DVD boxes. One can also become a Trekkies and go to the Star Trek conventions dressed as a Volcan. But if someone wears Star Fleet uniform in his everyday life and forces his kids to learn Klingon – well, we got a problem. But does it mean that he is not a Star Trek fan any more? Same story with football fans. Some go to the matches occasionally, some follow their team to all away games and some scratch the neighbours car with a nail because it’s green and they are hard line Ranger’s fans. Radical vegans who demands a vegan diet for predator animals would be ridiculed in Futurama, but nobody would claim that they behave like that because they eat too much bacon. If the British Defence League throws stones at the houses of immigrants, nobody would claim that their behaviour has nothing to do with their understanding of patriotism and if Tomasz Terlikowski, self appointed spokesperson of the Polish Catholicism, tells some embarrassing bullshit again, he is still called “ultra catholic” and nobody would even think to call him atheist or Pastafarian.

I can go and go on with the examples and the pattern will be always the same – because one can engage in something briefly or deeply, but it is also possible to get involved too deeply. Let’s imagine ideologies as a gravity potential wells on the space-time continuum of the rational perception of the world. One can use it to do something good – just as deep space probes use Jupiter’s gravity well as a a gravitational slingshot. It is also possible to engage more and to enter its orbit – from that moment that ideology becomes a centre pong around which everything such person’s life revolves. But someone else could go deeper, and keep falling and falling into that potential well until he gets behind the event horizon and loose all contact with rational word outside. This is where British Defence League, Tomasz Terlikowski and Islamist Radicals come from.

Because there is no reason why Islam should be exception from this pattern. Yet, whenever someone commits some atrocity in the name of Islam, we hear that he hasn’t anything to do with a Muslim faith. Of course, that people has almost nothing with common with regular Muslim person, who leads a normal life, goes to work and takes care for the family. Almost, because they all have common denominator: they believe, that their understanding of Islam is right.

So let’s end this conjuration of reality and let’s speak openly about facts: it weren’t Quakers, Pastafarians or Smurfs that killed Charlie Hebdo cartoonists. Radical islamists did it.

While Muslim religious leaders race French politicians to assure, that murderers had nothing to do with Islam, suddenly the main character of the story turns out to be a policeman called Ahmed. He is portrayed as a “Muslim who gave his life to defend people that were mocking his religion”. One could think, that the whole Charlie Hebdo affair is about non-Muslims killing Muslims… Absurd.

Setting aside the question if Charlie Hebdo was mocking religion or just radicalism, the policeman Ahmed did not died because he was Muslim who stood up to defend blasphemers. His religion had nothing to with it. He was a French citizen and as a policeman his job was to protect law and order in this country. Suggesting that he rushed to help “despite that the victims were mocking his religion” is, in my view, even offensive, as it allows the possibility, that policeman Ahmed could decide if he will do his job or not on the basis of if he shares the views on religion with the victims…

To say that policeman Ahmed is “an innocent victim” as in contrary to Charlie Hebdo cartoonist “who provoked their fate” is also inappropriate. A mere suggestion that any satire, even stupid and vulgar, is enough to “deserve” death is like blaming rape victim for wearing short skirt. Cartoonist had right to expect that their will be safe in civilised country, while risk of being shoot by the bandits, however slim, is part of a job description of the policeman.

Ahmed’s fate, as a Muslim victim who died from hands of Muslim extremist, however tragic, is also not exceptional. Boko Haram in Nigeria, ISIS in Iraq and Syria, Taliban in Afghanistan and many other jihadists slaughter thousand’s of people of which majority is Muslim as well. Sad fact is that most victims of Islamist radicals are Muslims, and more Muslims die from the hands of Islamist radicals than from the hands of the Western soldiers and drones.

It is always a tragedy when human life is lost. But Charlie Hebdo attacks were not about policeman Ahmed.

In the Andersen’s tale about the new clothes of the Emperor we can see the consequences of the situation where no one is brave enough to openly say the truth. In the tale the day is saved by the child, but we can’t count on children in the real life. This is why we have satire in our society – the jester, hidden by the shield of satire, can act as a safety valve and point out mistakes of the king or ridicule flaws of the people. Surely many court jesters were mostly providing entertainment by making fart jokes and stupid faces, but among them were also wise people – such as famous Polish jester Stańczyk, who is commonly considered as a wise politician and philosopher. It was exactly because of that the satire is allowed to break the rules, there was a space to discuss things that would otherwise be omitted. It lets the steam off and puts the pressure down – it’s just enough to remember that while in most of Europe was shaken by religious wars and people could die on stake for even completely innocent remarks regarding religion, in Poland Jan Kochanowski was openly mocking clergy and the Church in his jokeful poems. Will that come as a surprise to anyone that it was Poland that people were heading for safety when they had a perspective of being burned at the stake?

The attack on Charlie Hebdo is an attempt to silence people, who are paradoxically needed by both side of the conflict between West and radical Islam. Voltaire’s freedom of speech includes also freedom to say things that are stupid, or that will not be liked by some other people. Freedom of speech that would limit itself only to things wise and not offensive is not a freedom of speech any more. In addition, it open to abuse – because there is no objective definition of what is wise and what is not, and it is not possible to objectively judge what can be offensive and what cannot. And if you want to see how “judging offensivity” looks in practice, go to Poland and attend to any court case over the matter of “offending religious feelings” (sadly the UK chooses to not learn from mistakes of others and the new regulations on hate speech seems like a copy of that Polish infamous regulations). If we make mocking Islam illegal, it will not be good for Muslims as well, as granting them right of the Holy Cow will only cause further indignation of the far right. And if we ban printing anything that could be offensive to anyone – well, there go, as a hate speech, chunky bits of the Holy Quran in which the recommended fate of the infidels is described.

Text was published in www.gazetae.com

Graphics by Maciej Przybycień, based on  Bouchot Nr.539: Wikimedia

Do it yourself
Europe gazetae.com media politics