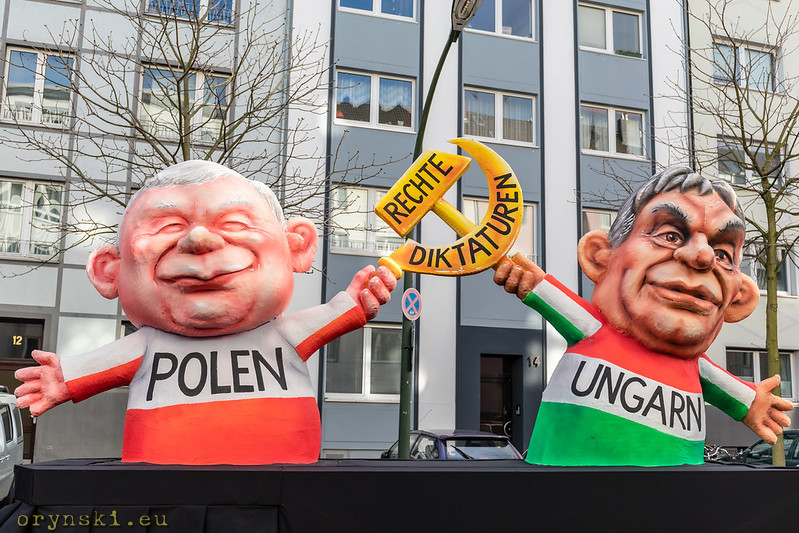 I know that after over 125 pieces of my series “Meanwhile in Cuckooland”some people might be bored with all that Polish kerfuffle. Those who still follow the series might see me and my warning about fascist/authoritarian tendencies of the Polish government as that boy who cries “wolf”, as I constantly cry how Polish democracy is in decline. The thing is, that that wolf is really almost here.

Don’t believe me? Let’s start with the definition: Fascism is a form of far-right, authoritarian government. Fascists believe that liberal democracy is obsolete and opt for putting the society under control of an authoritarian one-party state. The state is led by a strong leader with disregard for democratic values. Fascists advocate protectionist economic policies, aim to transform the society, and, as historian Stanley G. Payne described it, have a political aesthetic of romantic symbolism, mass mobilization, a positive view of violence, and promotion of masculinity, youth, and charismatic authoritarian leadership. According to Roger Griffin, fascism has three core components: “(i) the rebirth myth, (ii) populist ultra-nationalism, and (iii) the myth of decadence”. Sounds familiar? Let’s take a closer look then.

In 2003’s book “Fascism, anyone?” Lawrence W. Britt provided a list of early warning signs of fascism. Let’s treat them like a checklist and see how far PiS has gone:

Patriotism and the nation is the main pillar of PiS worldview. The fatherland and worship of national heroes is the basis of their message. Unless, of course, you don’t happen to agree with them, then you’re a traitor or “not a true Pole”. You can read more (in Polish) here

2. Disdain for the importance of human rights – check √

According to Helsinki Foundation, during PiS rule Poland saw the biggest retrogression in human rights since 1989.

3. Identification of enemies/scapegoats as a unifying cause – check √

The “enemy of the day” depends of the current political needs. But the list is pretty constant: LGBT, refugees and migrants, European Union (while PiS pretend to be pro-EU, their actions show otherwise), Germany, Russia, the opposition… The list goes on.

4. The supremacy of the military/avid militarism – check √

During the PiS rule, the military spending has been increased, the Territorial Army has been established and the presence of the US Army on the Polish soil has been secured. More (in Polish) here.

In the PiS’s world view, for the most part compatible with that of Catholic Church, the role of woman is first to be a mother and give birth to children. Or even to deformed fetuses – as the idea of abortion ban returns regularly to PiS agenda. They are also against international conventions protecting women as victims of domestic abuse.

Regular readers of my column are probably well aware of the fact, that Polish state media became a government propaganda tube. But recently independent journalists are also being persecuted – just last week reporters from Gazeta Wyborcza and OKO.press – outlets that are biggest critics of PiS government – have to face court for “participating in illegal gathering” – they were reporting on anti-Kaczyński manifestation that happened outside his home. The crew from the state TV was also present, but they weren’t bothered by the police.

The first thing PiS does when they come to power is to secure and cleanse the Security Services. Let’s just remember how Mariusz Kamiński, sentenced by the court of first instance to a prison time for abusing his powers during last PiS rule, had been illegally pardoned by president Duda, just to be able to take over the country’s intelligence and counterintelligence organizations. Read more here (in Czech).

If you are a regular reader of my column, you are well aware about the relations between Polish church and state. If you are not, just watch the top PiS politicians dancing at the mass to celebrate 27th anniversary of Radio Maryja, an ultra-catholic right-wing radio station run by a charismatic Tadeusz Rydzyk, listen to that idolatrous speech to him coming from the government minister, listen to Jarosław Kaczyński calling the Catholic Church as “part of our national identity” and “the carrier of the only system of values known and recognized in Poland”. More on relations between the PiS and the church here (in Polish)

Polish PM, Mateusz Morawiecki, has a background in banking and big business. He decided to drop the idea with taxing American Internet corporations and does everything to please big corporations – even at the expense of smaller Polish businesses.

Despite having well-being of Poles on its standards, PiS did nothing to reduce the pathological scale of fake self-employment and zero-hours contracts on the Polish job market. Moreover, the new “economic shield” introduced to tackle the results of the COVID-19 pandemics instead of supporting the workers reduces their rights and makes sacking them easier. Meanwhile, Solidarność, Poland’s biggest trade union, has been reduced to PiS’s political sidekick, and during the time of conflict – like when the teachers went on strike – sides with the government, not with its members.

11. Disdain and suppression of intellectuals and the arts – check √

Kaczyński for years was showing his disdain to the intelligentsia. He coined a derogatory term “wykształciuchy” to describe educated people who happen not to agree with him. He refuses to listen to country’s best experts and prefer the third sort of them, as long as they tell him what he wants to hear – just look at the new PiS elites, when the judges of constitutional tribunal, traditionally best legal brains in Poland, have been replaced by magister in law who was deemed by her peers to be unsuitable for a judge in a regional court (Julia Przyłębska), a Ph.D. lecturer from an obscure local university known for her boorishness and complete disregard to the law (Krystyna Pawłowicz) and a former communist prosecutor (Stanisław Piotrowicz).

When it comes to arts, PiS gave up on promoting valuable artistry (unless it carries “patriotic values”, but that tends to be of very low quality) and instead caters for the lowest ranks, promoting music such as Disco Polo

12. Obsession with crime and punishment – check √

One of the factors that brought PiS to power is their hard stance on corruption and crime. Lech Kaczyński gained popularity in early 2000 as a Minister of Justice known for his harsh stand against criminals. Continuation of that curse has been engraved in their opening manifesto when the party was established back in 2001. In the first PiS government, the role of formidable sheriff has been taken over by Zbigniew Ziobro, but as if it was not enough, they also established Central Anti-corruption Bureau. At the beginning of their second time in power, asked where they will get money to deliver on all of their electoral promises, Prime Minister Beata Szydło famously said: “it’s enough not to steal”. In a famous speech, Kaczyński was accusing the previous government that during their rule “corruption, nepotism and cronyism” has been taken to the extreme.

It turns out that aforementioned Kaczyński’s words were more like a promise of the things to come than criticism of the former government, as while he was right that this was always present in Polish public life, under current PiS rule, “corruption, nepotism and cronyism” has been brought to the levels not known before. Regular readers of my “Meanwhile in Absurdistan” series will remember people like Misiewicz, a young spokesperson for the ministry who acted as de-facto deputy minister only to be later rewarded with a cozy job to which he was in no way qualified. His name becomes a synonym of the unqualified people from PiS that were given lucrative jobs thanks to their party associations. One of the opposition parties even created a page called misiewicze.pl, on which hundreds of such cases were listed. And that was back in 2016, today the numbers are probably higher by orders of magnitude. And even government funds are shared between PiS supporters and friends or used for political corruption: more than half of the local councils ruled that are not ruled by PiS have not seen a penny from the Local Roads Fund.

And so, here we are at the last position on that list. If you read a few most recent chapters of my series, you might already see why the oncoming presidential vote on the 10th of May 2020 be illegal for so many reasons. First, they will take place in the de-facto state of civic emergency (the drive for those elections is the main reason why PiS refuses to introduce this state despite raging pandemic of COVID-19). Secondly, it is illegal to mess with election laws for 6 months before elections, and if everything goes according to Kaczyński’s plan, new laws will take effects just days before the election day. The elections will be nor secret (as the postal vote require to put personal information in the same envelope), nor equal (as PiS candidate, incumbent president, is the only one who can carry on with his campaign, supported with state-owned media and government institutions), nor common (as many Poles, including me, will not be able to vote).

The elections are impossible to conduct according to Polish Commissioner for Human Rights (one of the few institutions that PiS failed to take over yet), will be unfair according to Helsinki’s Foundation of Human Rights and are “source of concern” for the EU Commissioner Vera Jourova and European Parliament. Even the Polish Ministry of Foreign Affairs admits, that it will be impossible to safely conduct elections amongst the Polish diaspora.

It feels like Poland is cursed. When in 1791 Poland passed The Constitution of 3rd May, one of the first in the world and very progressive, the magnates teamed up with the Church and Russia to overturn it. That led to the First Partition of Poland, and soon after for the country to lose its independence for 123 years.

When Poland came back to the maps in 1918, the young democracy was not to Józef Piłsudski liking, so he staged a coup d’etat in 1926. As a result, until Hitler’s invasion Poland was ruled by authoritarian Sanation governments, that claimed to fight corruption in Polish politics and moral diseases in public life. Sanation was taking over numerous institutions and gradually limiting powers of the parliament. With time, the opposition has been persecuted, forced to emigrate, handed jail terms, or sent to a detention camp in Bereza Kartuska. Józef Piłsudski ruled from the back seat until his death in 1935. Does it sound similar to some of the PiS actions in recent years?

Józef Piłsudski is commonly considered a national hero and father of Polish independence. Kaczyński probably thought of him during his famous interview with Teresa Torańska in 1994 in which when she asked him about his life’s aims, he answered: I want to become a retired savior of the nation.

The trouble is, that unlike Piłsudski’s, Kaczyński’s merits in the fight for Polish independence prior to 1989 are very limited. Therefore becoming backseat ruler of the authoritarian state is his only chance to follow the steps of Piłsudski. And it seems he is nearly there, so he will manage to realize his dream. With a slight difference. If he succeeds, he will be remembered as not as a savior, but a traitor of the nation.

But at least we’re making progress. This time Polish democracy lasted a quarter of a century.