In the last chapter, I wrote about PiS’ preparations for the oncoming elections. Today, as promised, I would like to look closer at what the opposition has to offer. It is not easy to run campaign against PiS, that has at its disposal not only the public TV and Radio, that were turned into PiS propaganda machines but also much bigger funds – I spent last two weeks in Poland, and the amount of PiS posters and billboards I saw was enormous – I would estimate that for each poster or billboard of any of the other parties, there were at least two posters of PiS candidates.

And as if it was not enough, the opposition posters are often covered by PiS ones or simply destroyed or sabotaged. Not only by the unknown perpetrators: a Koalicja Obywatelska’s candidate poster in Wyśmierzyce was destroyed by Krzysztof Więckowski – a local PiS councillor and the member of the electoral committee. There is no doubt about it – he has been caught by three different CCTV cameras. Such crime is punishable with jail time or a penalty of up to 5000 zł, but, of course, being from PiS, he was only cautioned by the police.

The uniformed forces are often supporting PiS, sometimes in much worse ways than mentioned above. Katarzyna Lubnauer, a leader of the .Nowoczesna party had to stay at home after receiving death threats. This time police worked swiftly and captured the author of those threats who turned out to be a member of the Parliamentary Guards. 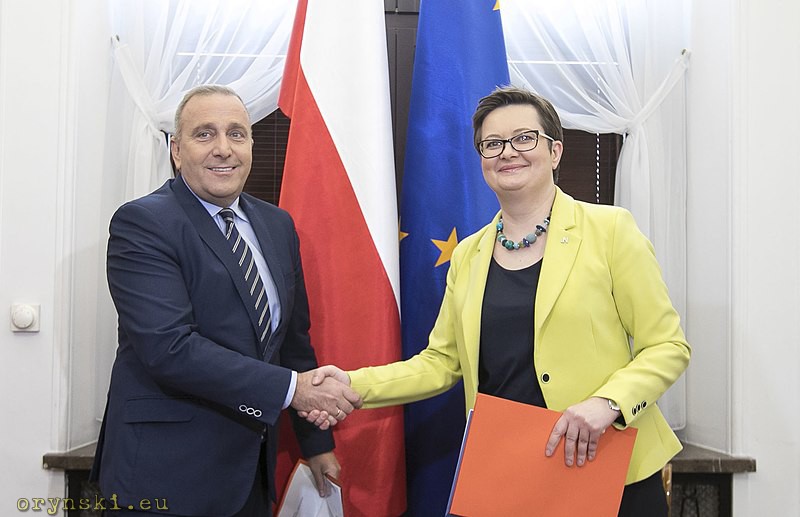 But even such difficult circumstances cannot be used as an excuse to the biggest opposition coalition. Koalicja Obywatelska, consisting of Platforma Obywatelska, .Nowoczesna and some smaller movements fail to come up with a convincing program. Platforma’ leaders hoped to construct one big opposition list to go under the standard “we need to take power away from PiS”, but the times when “we are not PiS” was a sufficient proposition for the voters are long gone. Most left-wing parties, as well as PSL and Kukiz, decided to go on their own, and the only cooperation between them is a kind of non-aggression pact, in which the opposition was supposed to put up only one candidate to Senate in each of the constituencies. This hasn’t happened everywhere – in some districts there are more than one of the opposition candidates, and in Warsaw, after the “united” opposition candidate turned out to be conservative politician Kazimierz Michał Ujazdowski, until recently a PiS MEP, he will have to compete against independent candidate Paweł Kasprzak, leader of the grass-roots movement Obywatele RP, known from their anti-government street protests.

Platforma’s stubbornness when it comes to putting defectors from PiS into their first lanes is hard to understand, especially that they did it in the last election and it did not work well: many voters were unwilling to vote for them, thinking that if they wanted someone from PiS, they would simply vote PiS. Those, who made it to the parliament failed (maybe apart from some colourful speeches by Michał Kamiński) to make any significant contributions. In recent local elections, they tried to put Kazimierz Ujazdowski up for the president of Wrocław despite him having nothing in common with this city, and that has been met with fierce protests of their electorate, as well as local PO activists… Surely they should be able to learn their lesson by now?

All that, in connection with the fact that Platforma Obywatelska is led by unpopular Grzegorz Schetyna and the fact that .Nowoczesna, that entered the parliament in the last election is a bleak shadow of former self, and the fact, that two smaller members of that coalition – the Green Party and Inicjatywa Polska led by Barbara Nowacka – although small, have strong left-wing stand and thus are in many ways incompatible with their bigger partners, could be the reason why this coalition failed to come up with a catchy program. Despite pumping huge money into online campaigning – they spent ten times more on Facebook advertisement than PiS – they failed to break with a message that would help them to convince the voter, that they have something more to offer than “we are not PiS”. Their decision to make deputy speaker Małgorzata Kidawa-Błońska a face of that campaign, and promote her as the opposition’s candidate for prime minister came too late and had a bumpy start: PO supporting media and publicists often portray PiS voters as an uneducated pleb or a flock of stupid sheeps unable to think for themselves. This is often criticized, and yet, they decided to promote Kidawa-Błońska as grand-daughter of important politicians from pre-War Poland. I see it as double standards, especially because when PiS points out that someone’s parents or grandparents were, for example, a communist activist or a Wermacht soldier, Platforma is first to protest, saying that someone’s ancestry has nothing to do with merits of a person in question…

It seems then, that main reason to vote for Koalicja Obywatelska is that this is the biggest party that is not PiS, and thus has a chance to take over control. 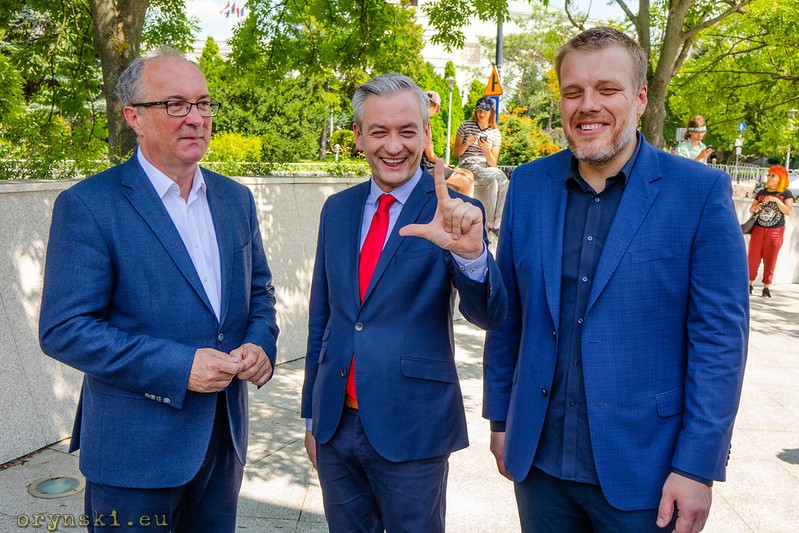 But those, who expect something more from their candidates this time have a choice. According to polls, the third bigger committee is Lewica. Unlike Platforma, the young left-wing party Razem seems to be able to learn from their own mistakes and decided to abandon their radical course and seek compromise. As a result, they teamed up with post-communist SLD and Robert Biedroń’s Wiosna and for the first time in a while, the parliament has a chance to get a true left-wing representation, especially that while Razem is the smaller of the three, they seem to be leading the campaign: post-communist SLD despite they still have some support (although recently below electoral threshold) is considered by many to be a political zombie, a safe haven of the people from the by-gone regime. Wiosna on the other hand, after a fantastic start, has lost momentum after it has emerged that while posing to be a left-wing party, they are, in fact, a populist centrist party orbiting around a charismatic gay activist Robert Biedroń. This might not be enough for left-wing voters who long for some concrete changes in Poland. This is why this coalition might be a big chance for Razem: they were often criticized for their stubbornness and refusal to join forces with the others. Now it might turn out that actually becoming part of something bigger might offer them a better chance to put their propositions forward than fiercely clinging to their own ideas somewhere in the dark corner of the political stage.

Two remaining committees are somehow different. PSL, an agrarian, Christian-democratic party, refused to get into a coalition with their former partner PO and tried to start in the elections on their own, only later joining forces with the remains of the Kukiz’15. Both parties are mostly known for that they have no clear programme: PSL for decades became known as a party willing to go into coalition with pretty much everyone, as long as it ensured that they will get some part in the government. They are trying to break with that cliché, but by now nobody knows what they really stand for and the fact, that their traditional electorate – small farmers – turned towards PiS made it difficult for them to have a smooth start. But at least one of PSL candidates made it to the headlines, after calling for the roadside trees to be chopped down, so the tarmac, no longer covered by their shadows, will melt and fill the cracks and gaps, thus causing the roads to self-repair.

Meanwhile, Paweł Kukiz, a charismatic rock singer, from day one of establishing his political movement back in 2015 was proud of having no manifesto at all, trying to spin it as yet another way in which he opposes the establishment. In the real world, it has only ended in him chasing his own tail, constantly changing his mind, and being unable to propose anything of significance. His MP’s, a conglomerate of random people from various right-wing paths, dispersed to other parties or became independent. Kukiz’ decision to team up with PSL, in the past compared by him to a criminal, mafia-like organisation, was a huge surprise to everyone. But what else is new? After all, Paweł Kukiz is widely known for his words “If I ever become a politician, spit in my face and call me a bitch”. 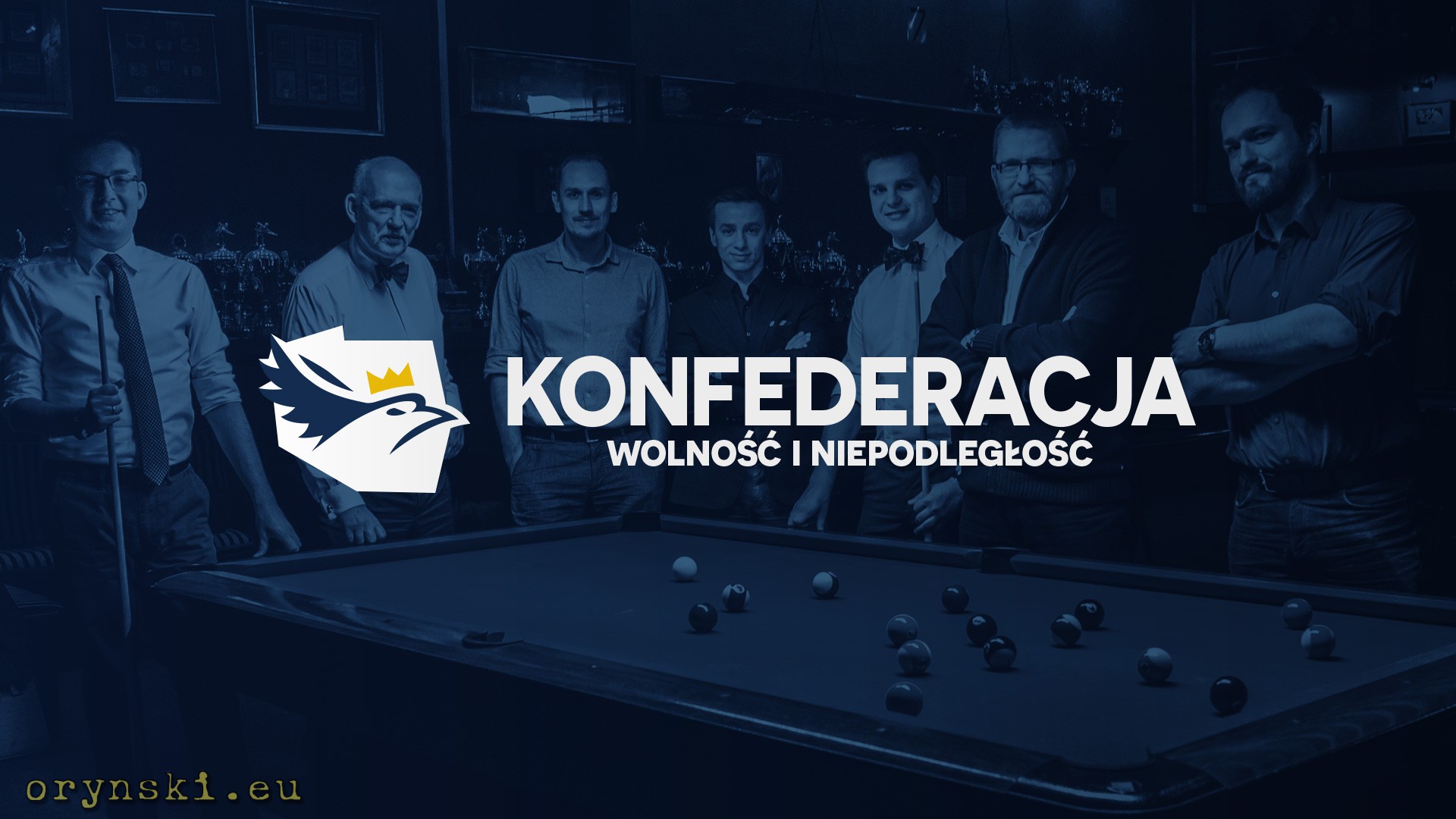 As a result, it’s hard to say what PSL and Kukiz have to offer, but if you think they are an exotic combo, wait until you meet the fifth of the electoral committees: Konfederacja. This is a conglomerate of radical right-wing organisations – so right-wing, that they often call PiS “communists”, “socialists” or “lefties”. Amongst them we have Ruch Narodowy – let me just introduce their leader Krzysztof Bosak to you. Recently he cried on Twitter, that the left, allegedly currently in power in Poland, is preparing new ideological craziness – they want to ensure that women aren’t paid less than men for the same job!

Along with Bosak, amongst Konfederacja candidates one can find Janusz Korwin-Mikke, ultra-right radical, who believes, that “LGBT is a bigger threat than climate change”, turbo-catholic right-wing publicist Grzegorz Braun, Robert Winnicki, who denies accusation of being a fascist, yet is known for inviting members of Italian fascist organisation Forza Nuova to parliament, or Justyna Socha, leader of the STOP NOP organisation, campaigning against mandatory vaccinations. There is that guy demanding nuclear weapons for the Polish army and there is Dariusz Klich, a follower of a crazy priest Natanek (a preacher suspended by a Church), and a medical quack Jerzy Zięba. He seems also to believe in many conspiracy theories. He tries to become a senator under a slogan (?) “Polish Children get sick after being fed with a bread poisoned by a brood of vipers in many immoral ways. Stop with Cainic games of PO and PiS – masonic pimps!” (Update: Dariusz Klich is now an independent candidate after discovering that his own party is controlled by the Masons as well).

I guess this is a case for a psychiatrist. And it would not be a first such case – another independent candidate, a raging anti-semite Leszek Bubel has been just forced to undergo a psychiatric assessment after being charged with 21 cases of slander and hate speech.

Let’s end this piece on an artsy note. Here you can see some musical clips promoting certain candidates:

Konfederacja opted for a catchy-tune mixing a folk notes with a modern beat, pouring all over it with generous amounts of Auto-Tune:

Candidates of PiS, PSL and Lewica opted for Disco-Polo, although the latter apparently was unable to afford a good singer (if there is even such thing as “good Disco-Polo artist”):

And only Koalicja Obywatelska seems to be able to come up with the song that won’t make your ears bleed:

Jan Szyszko, an infamous minister of Environment, responsible for severe damage to Polish nature and chopping down Białowieża Forest died today (9 October) unexpectedly. Just a few days ago he spoke to the press and claimed that carbon dioxide is a “gas of life”, said that he is sorry for Greta Thunberg for being misled and talking rubbish and that participants in climate strikes should be investigated and punished. He also said that Polish coal is attacked only for being Polish, as burning coal is clean – Jan Szyszko was an adamant denier of the fact, that Polish air is amongst most polluted in Europe and that burning coal causes smog and pollution, claiming that this is true only when it comes to foreign coal and that natural pollen from trees and flowers is also responsible for that issue.

According to Polsat News, his death was caused by pulmonary disease, often associated with breathing polluted air. I can’t resist noticing, that there is a sad irony in this tragic event.

This piece was written for Britské Listy