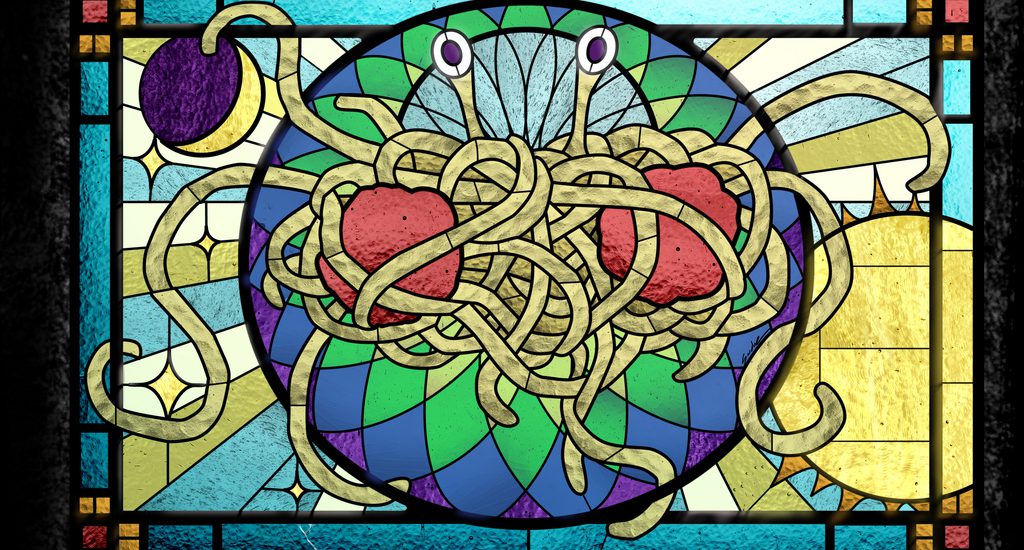 It’s official. Poland is no longer a country with rule of law any more. EU top court ruled, that Ireland might be right to refuse extradition of a Polish criminal, as due to PiS judiciary reforms, he might have his rights to fair trial compromised. And we can already see that he would not be the first one: Polish highest court just refused His Noodliness to have His church – Church of Flying Spaghetti Monster – officially recognized by the Polish state.

You might think that Flying Spaghetti Monster is some kind of a joke, and you won’t’ be alone – this is what ministry’s experts say – but this is actually quite a serious matter. See, the Polish law on religious groups is pretty simple: meet certain requirements – like gather signatures of a certain number of people, send the formal application as per ministry specifications and so on – and you will have your church registered. Pastafarians – as worshippers of the noodly God call themselves – did everything as required by the law, and yet the ministry, instead of just doing their part of the deal, called upon experts, that ruled while everyone is free to believe in what they want, the religion is not serious enough to be recognized by the state. “Is it possible for some group of reasonable and quite educated people to seriously believe, that omni-powerful and omni-knowing Flying Spaghetti Monster, creator of the universe really exists?” – asked the experts. And this is where we reach the bottom of the matter: can any expert or judge decide if someone REALLY believes in something? How one proves in court that his faith is true? And why Flying Spaghetti Monster cannot be taken seriously, but it is alright to believe in the story about a guy born from virgin, who is his own son and himself at the same time and who send himself to be tortured and killed in order to spare beings he created from eternal fire to which they would be otherwise destined on the basis of collective responsibility for the sins of their great-great-great… …great-mother? And last but not least, is it fair that state refuses to recognize Pastafarian faith, but at the same time it’s happy to sponsor an academic course in demonology?

Anyway, there will be no Pastafarian church for now (the faithful are going to Strasbourg). There won’t be a constitutional referendum as well – this was an idea of President Duda, who, judging from the fact that he broke it so many times, don’t like current constitution and proposed to ask the people if they would like to have new one and, if yes, what they would like to have written into it. It seems that it was his attempt to show some degree of independence, as this was his personal idea, but his party have shown him where he belongs: in parliament PiS abstained from the vote, allowing the opposition to vote against it, and then they barefacedly announced, that “this wasn’t Duda’s defeat, it was his great success, as he managed to open discussion on the topic”.

A discussion is not allowed on the matters PiS considers to be important: for example names of the candidates to the Highest Court have been made confidential (which is quite ridiculous, as, by PiS own laws, Judicial Council should express its opinion on the candidates live on the Internet). Which is now unlikely to happen, as the candidates to the PiS puppet highest court would not like to have their names known unless it’s sure that they got a job, because if they got it, then they have financial security, but if they applied for it and failed, they are finished in the legal world.

Lower courts are also busy. Jerzy Owsiak, a popular figure and head of the biggest Polish charity Wielka Orkiestra Świątecznej Pomocy, had been dragged to the court again. Police received an anonymous tip that he used a swear word during a meeting with readers of his book in one of the bookshops. The informer has not been present, but he saw it on the internet and felt offended. The court, of course, dismissed the case (as the swearword was just a quote from the anecdote described in the book), but Owsiak had to travel few hundred kilometres in the eve of the big open-air rock festival Pol’and’Rock (formerly Przystanek Woodstock), which he is a chief organizer. It is clear to everyone that this is plainly just a harassment, as Owsiak is openly criticizing PiS’ government.

The state is making sure, that they know who will need to be harassed later. Portal oko.press obtained document proving, that anti-government protesters have been followed by the police (which is by itself illegal, as one cannot be under investigation until being suspected of a crime, and protesting government is, so far, legal in Poland). The quality of that police work can be questioned – as seen from example when leaders of the youth movement met in a cafe with Zbigniew Hołdys – former leader of a rock band Perfect and today a columnist and a fierce critic of PiS – and the police, despite having people stationed outside that cafe for several hours, haven’t noticed a thing. But perhaps the officers simply don’t want to be involved in any of that madness and pretend not to see anyone?

Especially that the situation is getting more and more ridiculous. For example, police in Szczecin is searching for someone, who put a t-shirt of a newly build monument of Lech Kaczyński. The t-shirt had a word “Constitution” on it. The suspect will have to answer for “insulting the monument”. It’s funny, that when neo-Nazists hanged portraits of the opposition politicians from the gallows, the government saw it as “political happening” and no one had to answer for it…

Definitely, today in Poland facts depends on who reports them, and even then one cannot be sure that there won’t be any u-turn: the fake news industry becomes more and more witty. Portal oko.press had looked at the recent case of an aggressive protester, which proved to be a very interesting example of the double play of the right-wing media:

There was a footage of an aggressive protester. The right-wing media and twitter bots instantly started to spread the message that this is similarly looking Ukrainian actor, commonly employed by TVP as an extra. This sparkled two reactions: right wingers started raging against Ukrainian immigrants. They don’t need much, over recent few years attitude towards Ukrainians changed dramatically and they often face aggression (In one of the Wrocław’s court there is a trial of a man who attacked a Ukrainian shouting “Get the fuck out of Poland”, which is quite ironic when we know, that the attacker himself lives and works in Holland). Meanwhile, the opposition started to wonder why a Ukrainian would be so passionate in anti-government protests in Poland and started to suspect, that he might be a provocateur planted there by PiS. Jarosław Kaczyński, a lawyer who defends the protesters (no relation to PiS leader, the name is purely a coincidence) informed, that this is not true and that the aggressive protester and that Ukrainian actor are two different people. At this moment the whole PiS propaganda machine made their move. PiS supporting media started to spread the message, that it is an opposition that spun the hate against innocent Ukrainian guy. As you can see, PiS PR machine is not only the stupid and brutal propaganda in TVP. They can play also quite smart games as well.

Shame, that while they are good at smearing and attacking the opposition, they prove completely useless when some damage control is needed. As in the situation when it had emerged, that former Prime Minister Beata Szydło uses government limos to drive her mom to the doctor. With all that photographic evidence the statement from the government protection services that “we don’t offer rides to family members of the ministers” might not be sufficient…

The government recently faces a lot of tricky questions. After losing her court fight, minister of education has been forced to make names of her “experts”, who created a new curriculum, known to the public. So far the ministry published only 25 names of over 170 experts, and it had been confirmed that the woman who created curriculum in mathematics have no formal qualifications (until we count “being a Catholic activist” as such). The internet knew that for years (here is a forum entry from October 2016), so if other rumours are to be confirmed, this will be a disaster.

Meanwhile, Minister of Health and Minister of Environment have to answer a tricky question about chemtrails. One of right-wing MP demanded to know if the government is aware and act on the planes spreading chemicals in order to manipulate weather and control the access of the sunlight. She wants to know also why there is no public discussion on the topic. She suspects, that chemtrails might be one of the reasons why Poland has such a big smog problem in recent years. This is not the only case of right-wing politicians supporting conspiracy theories, back in 2013 Jan Szyszko (the guy, who later chopped down Polish forests as PiS’ minister of environment) also wanted to know if anything is done about chemtrails. Patryk Jaki, PiS’ candidate for a president of Warsaw, supports anti-vaccination movement (although they don’t like to be called that, they just threatened television TVN with legal action, so to be on safe side let’s call them “pro-epidemics”). What will come next, Flat Earth? Or perhaps the government will seriously take Catholic’s protests against the bus that goes around Highway to Hel?

Some people already demand the latter: right-wing internet portal Fronda demands government intervention as the bus to a city of Hel, lying on the top of Hel peninsula, bears the number 666. While most passengers see this as a funny pun, Fronda cries about “promoting satanism” and “attacking Christian foundations of the Polish state”. Well, that seems like a job for those demonology experts mentioned above…

But at least for now there is no mention of Smoleńsk. Although for those, who are fed up with never-ending patriotic diarrhea of the right it might be the case of coming from under the rain into the gutter, as with the 1st of August being the day when Warsaw Uprising started, Poles are being bombarded from each direction with glorification of the young people who sacrificed themselves in that futile fight. Even children have not been spared: TVP ABC, a children’s channel of TVP, have prepared a song, in which children dressed as insurgents sing about how cool it is to die for the fatherland:

I got a feeling that I’ve seen something like that before. And I was right. Can you see similarities between the above and the one below?

But there are differences as well: as one of my friends observed, while Russian brainwashed kids sing about killing and dying to protect happiness in their fatherland, Polish kids sing about dying for theirs for no reason in a futile fight “for honour”. And while little Russians chant “Uncle Vova, we stand with you!”, Polish kids don’t have to praise their political leaders. Yet…