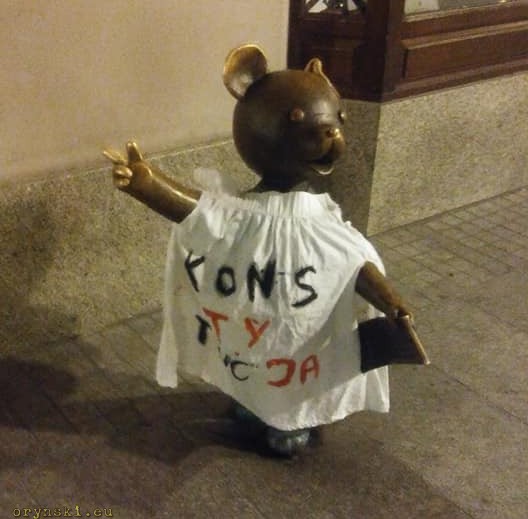 If anyone doubts that education and knowledge matters, the situation in the Polish battle for the independence of the courts proves it yet again. While PiS was already triumphant, trying to mock high judges that were forced to retire, the Highest Court has outsmarted them and fired a set of questions regarding new PiS laws to the European courts in Luxembourg. That freezes executions of the new bills, thus stopping PiS’s attempts to take over Polish highest courts for now. Of course, presidential experts claim that the judges had no right to do it. Julia Przyłębska, a puppet chief of Constitutional Tribunal already ruled that this is unconstitutional – apparently, she had forgotten, how the Constitutional Tribunal works – its chief expressing opinions to the media is actually not considered to be an official ruling.

Yet again the outstanding experts, professors and academics have outplayed PiS’s team of legal experts consisting of mediocre graduates of law and administration and former communist prosecutor. The sad thing is that it will only delay PiS’s march for power – they will just do umpteenth amendment to their law during some of the late night parliament sittings. It’s like playing chess with a pigeon – you might be Garry Kasparov, but pigeon will keep knocking over the pawns and shitting all over the chessboard no matter how smart your gambits are. Their legislative diarrhoea results in the law being of so bad quality, that they keep correcting it all the time anyway. For example, recently they have introduced the law allowing for the biggest cities to introduce a congestion charge similar to that in London. During the process they made an amendment that allows local councils to charge drivers only between 9 and 17 hours, but as the bill says that “entry to the city centre will be possible only after paying congestion charge” this amendment de facto made driving into city centre outwith those hours impossible. Such is the quality of the new laws.

Meanwhile, the fight between two Polands takes place not only at the front of the free judiciary. The religious war also progresses. The struggles I’ve been writing about four years ago seems just like a warm up to what is going on today. One of the front of that war is the education of the youngest. The PiS candidate for children rights ombudsman, for example, considers children rights activism to be a kind of “leftist manipulation”. For her, opposition to physical punishment is an example of an “ideological offensive of the West” and the institution of parliament of youth and children, that was up to the last year considered to be a school of democracy for the youngest citizens is in fact an example of “indoctrination of children into democratic ideology” and way to brainwash them into thinking that there is “no alternative to democracy”. Of course for the Polish right, brainwashing kids is OK as long as they are brainwashed into believing the things they consider right. Remember that Voigt from Tuszów Narodowy, who placed plaques with Decalogue at the entrances to all local schools? Foundation “Freedom from religion”, an NGO that monitors observance of the division of the church and state in Poland, officially asked questions regarding that matter. They wanted to know who pays for it, what the decision process was and so on. The local education ombudsman claims this matter is outside their scope of the interest. But the story only gets better, as now they got an answer from the Voigt himself. Or even two.

The first one is so outrageous, that I just quote it here:

“Please leave Decalogue alone, as the fight with God is the fight against another man. We tried freedom from God and His commandments during Nazi and Bolshevik occupation, which left millions of corpses behind.

Without Decalogue it is only possible to raise criminals and bandits.

In the name of Christ, Poles risked their lives to save Jews during extermination, and many of them paid with their life for them. If they were not religious people, they would never be capable of such heroism. Decalogue will remain where it is, and no foundation “Freedom from Religion” is going to dictate to us the values we are going to raise our children and youth with.

Men can only spread goodness when he is united with God, otherwise, the only thing he can pass along is the evil of the hell.

Last but not least, I would like to stress that nobody forces those, who consider themselves to be free from religion, to live amongst the Catholics that try to live according to the 10 commandments. In my view, for those, who treat Gods Commandments with satanic hate, there should be no place on the Polish soil, sanctified with the blood of its sons who defended Christian values and the Motherland”

So much for a division of church and state in today’s Poland. In other words: you are allowed to live in our country, as long as you keep your mouth shut and accept that we do with it what we please. But apparently only if you are a Pole, as the second letter from the Tuszów Narodowy parish demanded to know the “nationality or ethnic background” of the people behind the Foundation and if it has been sponsored from abroad.

You might say this is just some local Voigt from a little parish in the back of beyond, but what if this is prognostic of the things to come? It becomes pretty clear, that this ultra-right wing mix of nationalism and Catholicism is already supported by the state. Let’s forget that small village and just look at what is going on in the big city – Wrocław – instead. Here, former Catholic priest Jacek Międlar (banned from entering the UK as a radical hate preacher) had promoted his newly published book entitled “Mein Kampf…”, ups, sorry, I meant “My fight for the truth”. At first the event was about to take place in one of the clubs, but after the overwhelming protests from the local community (as well as from the Czech singer Petr Rimsky who cancelled his concert there arguing, that he cannot play at the stage that welcomes fascists) the club cancelled the event and he had no venue to host his event. As a result, the promotion of his book took place at the town’s marketplace. Międlar met his supporters flanked by other prominent neo-fascists from the town such as anti-Semite Piotr Rybak (we mentioned him in that part of this series) and his fellow author Roman Zieliński, author of the book entitled “How I fell in love with Adolf Hitler”. It’s worth to mention that while both Zieliński and Rybak have been sentenced for hate speech, Międlar, who become prominent only in recent years, avoided (apart from being kicked out from the church) any responsibility for his actions.

The event had been met with fierce protest, and the town ordered the gathering to be dissolved. The organizers announced that they are ending the event, and then continued book signing and other activities as if nothing happened, while the police continued to harass the protesters, accusing them of “obstructing the legal manifestation”, even though the manifestation was officially dissolved, so obviously could no longer be legal. The cameras captured police officers supporting criminals like Rybak while refusing to accept the report of one of the protesters who was attacked by him.

This is not the only example of police condoning fascists and extreme right. While a man suspected of “offending the monument” by dressing it up in a T-shirt with the word “Constitution” on it had his house raided by the police at 6:30 am without a warrant (I wonder what compromising materials they were looking for? A copy of the constitution? A picture of the chief of the Highest Court? Another T-shirt with a word “democracy” on it?), the case of neo-Nazis chanting Nazi songs and threatening counter manifestation with death had been dropped, as for a year the police failed to identify any of them, despite having excessive footage of the event. It’s interesting that while the faces of the anti-government protesters have been published on the police websites shortly after the protests, in case of those neo-Nazis, the police saw “no need of that” despite failing to identify them for nearly a year. Also, the wife of the mayor of Poznań had been sentenced for using the words “I am f*cking pissed” (“Jestem wkurwiona”) during one of the protests. The message is clear: protest against the government, and the police will find you and find something to fine you for. Support the government and you can use as vulgar language as you wish (casus of PiS MP Krystyna Pawłowicz) or threaten your enemies with death and you are going to be just fine.

Sometimes police actions against opposition become just plain ridiculous, as when two police cars were sent to capture people, who dressed a figurine of Uszatek the Little Bear (Medvídek Ušáček) in a tiny t-shirt with a word “Constitution” on it (dressing monuments is part of the widespread action). I wonder what the charges are going to be this time. I can understand why pointing out to PiS that late Lech Kaczyński, while perhaps not the best president ever, was a president that observed the constitution might be annoying and considered offensive to people who consider Polish constitution to be an obstruction in the fight for true freedom. But can one be offensive to a figurine depicting a little teddy bear from a children’s cartoon? And will Roger Waters of Pink Floyd is going be accused of offending himself, for that he wore a t-shirt with the word “Constitution” on it during his recent gig in Poland?

Anyway, I can go on with examples of police harassing anti-government protesters while condoning the behaviour of the far right. It becomes more and more clear that PiS is using police to silence those, who are unhappy with Poland being changed into an authoritarian, catholic-fascist country. And if anyone has any doubt about it, let me quote Antoni Macierewicz, former defence minister and one of the PiS leaders:

“We must never allow our adversaries to speak, never consider enemies of Poland to be equal to us in a discussion. They have their citizen’s rights, of course, we will never take it from them, but when it comes to independence, we will have discussions amongst ourselves only – for Poland and with Poland in mind”.

In other words: you are allowed to live in our country, as long as you keep your mouth shut and accept that we do with it what we please. Haven’t we heard something like that already today?

When a Voigt of the small village says something like that, you might dismiss it as some aberration – there is always a chance, that some nut-job will make it to some local position of power. But when one of the most influential people in PiS, creator of the parallel system of the armed forces (so-called “territorial army”) says the same and is applauded by Jarosław Kaczyński and members of the government, then I think there is a genuine reason to be worried.