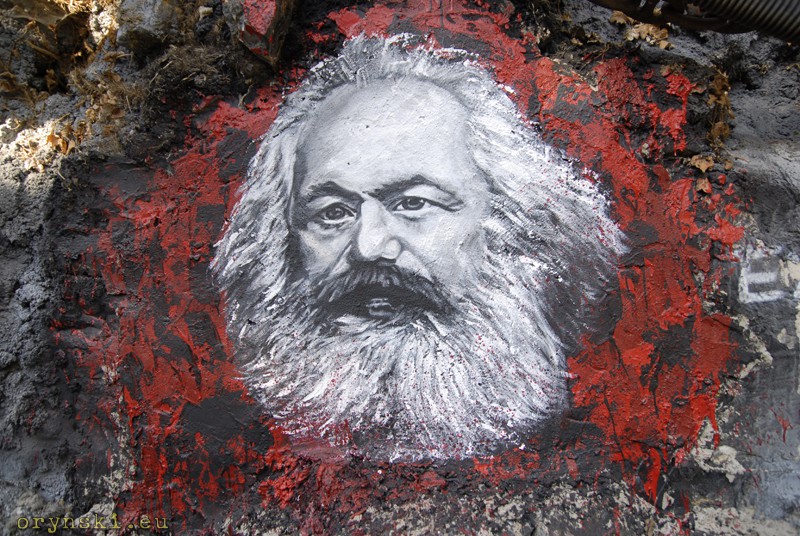 Ok, I know I’ve been joking about that before, but this time it is serious. Polish police and justice system finally got to work, and try to tackle hate speech and extremism. The problem is, that this time they themselves make a joke of it.

Let’s look at this case: in 2016 football hooligans from Warsaw displayed a banner, that informed, amongst others, Gazeta Wyborcza, openly anty-PiS editor of Newsweek Tomasz Lis, TV host Monika Olejnik “and other whores”, that they are going to be hanged. It was not easy to get the justice system involved here. First, the prosecution office refused to take the case further. According to prosecutor Agnieszka Małyszka “it was just an impolite way to express one’s political views”. According to her, it should not be considered as a threat, because the slogan was “not too precise” and… not addressed to anyone personally.

This decision was of course appealed and the court forced prosecutors to look closer into the matter. They investigated and found three men, who placed the banner on the stadium tribunes. One of them assured the prosecutors, that he was not aware of the banners content, as it was given to him folded, and since he unfolded it from the top down, he only learned about it after seeing the game’s footage on TV later on. The other two were also unable to help, so the case has been remitted, especially that prosecutors failed to establish who wrote those words.

Luckily, the new case should be much easier. After all, this time police had entered not a football game, but an academic conference. They were informed, that there might be an “anti-national activity” going on, or that someone might be “promoting totalitarian ideas”. And this time it is pretty clear who wrote what: the program of the conference can be found online, so if the accusations will be confirmed, it will be easy to punish the perpetrators. And there is a few of them – after all, it was an interdisciplinary conference during which philosophers, sociologists and political scientists were discussing, if ideas of Karl Marx and his followers are still relevant in today’s world…

This is a result of that controversial new law introduced by PiS, that angered Israel, but apparently it focused not only on people abroad, which is a bit worrying, as while people abroad can be angered or laughed by it, people in Poland might get in trouble. And the fact, that the new law is used to control academic discourse in Poland, and yet cannot do nothing when Poland is indeed smeared in foreign media shows how pointless and stupid this law is. Because what would PiS do about the recent piece in idnes.cz, where the big title shouts at the reader “Social Services take away Polish kids in the west by hundreds” while small letters near the end of the article admit, that “It cannot be said, that Poles are an exceptional group here, that have more kids taken away than for example Britons or Germans”? Nothing. So the only result of this stupid law is that soon such articles would not be needed: Czech readers, instead of feeling superior after reading some bloated rubbish on idnes, can now mock Poland for the real fact, that in our country philosophers discussing Karl Marx can be today considered criminals that spread anti-Polish, totalitarian ideas.

And what will come next? I wonder, if PiS-controlled Institute of National Remembrance researches Nazi and Stalinist crimes in Poland, can they be accused of promoting totalitarian regimes? Maybe it also explain why PiS politicians refuse to speak with the parents of disabled persons, who protest by occupying the corridors in the parliament building? Maybe they are afraid of being accused of spreading diseases or something?

No, it’s not that. They simply don’t give a f*ck about them. They are only interested in giving money to their buddies, or to their voters base, if need be. The protesters beg anyone from PiS to give them a minute or two, but this not went well for president Duda and PM Morawiecki, who had to face (rightful) accusations of hypocrisy, so the new approach of PiS MP’s is just to show their back to the protesters. This still from TVN’s material went viral in Polish internet: 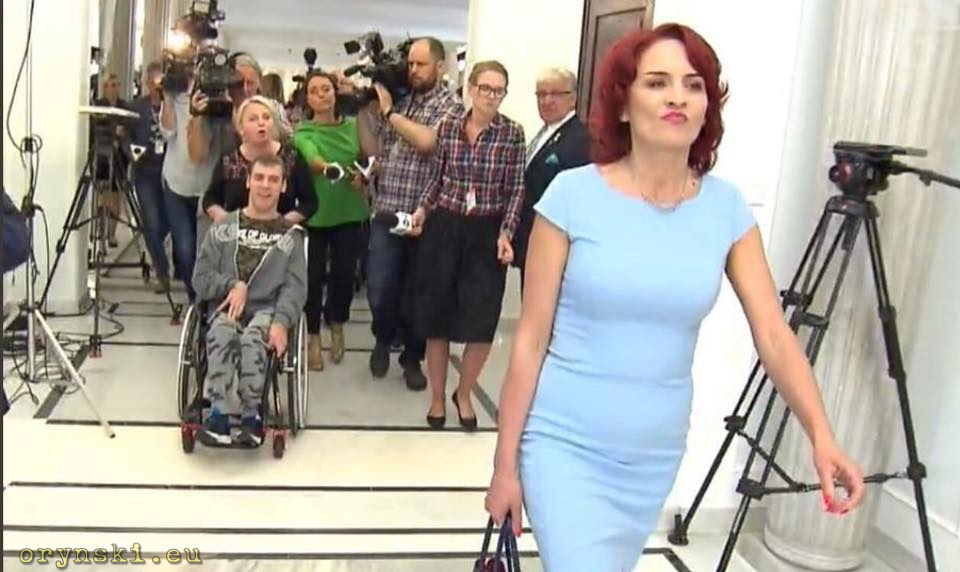 The lady in front is PiS MP Bernardetta Krynicka, who earlier said, that she would “find some paragraph” to punish the protesters for “abusing their children” (she would treat them lightly anyway, according to one interview she gave, people like me, “squealers, who inform foreign countries about Polish matters” should be hanged). This picture became a symbol of PiS’ approach to the common people – no words are needed, although I have to say that seeing the same picture with the caption “let them eat cakes” was pretty funny in a sad way.

In general, the level of discourse presented by PiS MP’s have went through the bottom of the barrel, and is now probably somewhere half way to the kernel of the planet. Let’s look at this interview with Dominik Tarczyński. Asked about Guy Verhofstadt idea to tie UE funds with the rule of law, in such a way, that they could be frozen much earlier, Tarczyński answered: “I propose to froze his brain”. According to Tarczyński, Verhofstadt has no right to speak about rule of law, as there is no Constitutional Tribunal in Belgium. And he should stop raving about changing Christian, European values into leftist deviations. Asked about Jean Claude-Juncker opinion, that Karl Marx should not be blamed for crimes of the communist regimes, Tarczyński answered “I would like for Mr Juncker to stop abuse alcohol. I am a proud grandson of a Cursed soldier”. He goes on, but that’s enough.

There is an old Polish joke about a kid, who was ridiculed by a clown in the circus. His father told him “don’t worry, next time you will go with Uncle Waldek, he is the master of the sharp, snarky comeback, so he will show this clown his place”. And so, they go to the circus again, this time the clown picked up on Uncle Waldek. He listened for a while to clown’s jokes at his expense, then stood up, shaked his fist and cried “fuck you, you stupid clown!”. It looks like Mr Tarczyński learned his discussion skills from Uncle Waldek…

Antoni Macierewicz tried to be a little smarter. When the media wrote about yet another accident his limo was involved with, he published the following tweet:

Well, mister ex-minister, while I might understand your frustration, that the media attention was yet again drawn to the fact, that you still enjoy a government limo and a protection of military police, despite being just a regular MP again, a poor attempt at kindergarten poetry with morale would not hide the fact that your driver was in the wrong again. And, by the way, how it is even possible, that Antoni Macierewicz still enjoys those perks? Well, when he was still a minister, he granted the limo and the protection to the chief of the Smoleńsk commission. That is: to himself. During his recent meeting with people of Opoczno he said, that the PiS government is only trying, as good as they can, to fulfil the will of Poles, who made the real decisions. I can believe that he might be indeed convinced that it is Poles who want him to travel around in luxury limousine paid by their taxes…

But Macierewicz is not the only man, who feels the need to spread his wisdom to the masses. Recently father Franciszek Głód, a priest and a philosopher, decided to deliver some marriage council. And so, according to him, “Man, after work, feels very exhausted. He needs some praise, then some rest. One cannot expect him to get on with the next job immediately. The wives should know that!”. While he failed to provide advice as per what the wife should do, if she is also tired after coming back from her work, his twitter feed is full of interesting marriage advice. If there is some kind of time-space wormhole that allows us to see, how life looked back in 1880’s, father Głód’s views of marriage can be one example of such phenomenon.

Another priest has recently tweeted this picture with a comment “keep it up!”:

Apparently the 1880’s is about where the Polish Catholic church would like to see Poland.

But some wise people know how to use the Catholic church’ power for their benefit. In Podkarpacie district, well known for being the most conservative in Poland, a local businessmen ordered a holy mass in the intention of “God’s blessing for further development of a gas station in Niebylec”. Pure genius: to inform locals that previously closed gas station has been reopened again would cost a fortune in advertisement and billboards. And for a mere few hundred złotys, or whatever the running price is now, not only everyone in the parish knows that, but the info has been even forwarded by the national media!

But the church should brace itself for the competition. The new religion is emerging. In aforementioned Podkarpacie, there will be a competition for a school pupils to celebrate Poland’s 100th anniversary of regaining independence. The speaker of the parliament himself took patronage over this event. The pupils are to submit work on one of the five topics of choice:

– President Lech Kaczyński as a leader of central and eastern European states;

– Lech Kaczyński’s approach to life. Is it worth to be faithful right to the end?

I always thought that Poland owes it return to the maps in 1918 to people like Józef Piłsudski, Ignacy Jan Paderewski, Roman Dmowski – if we really need some hero from the right side of the political scene. But Lech Kaczyński? Even Karl Marx has bigger merits in the fight of the Polish independence – he is known for being a keen supporter of independent Poland. And surely, if we can blame him for Stalinist atrocities, perhaps it would make even more sense to create yet another hero of the Polish independence as well? At least he was alive when Poland was struggling for freedom before getting it back in 1918 – unlike Kaczyński, who was born in 1949…