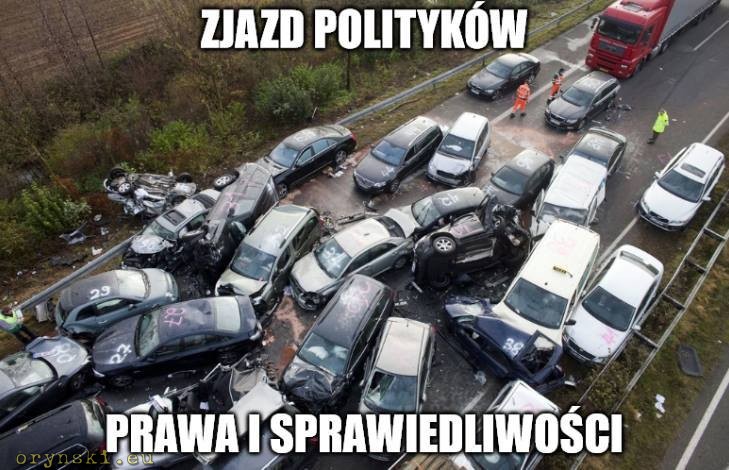 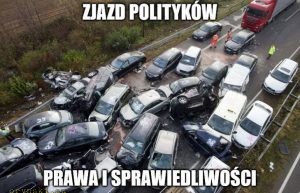 Many of my readers, including some Czechs, send me links to recent events in Poland, asking me to cover them in this series or ask “why I never mentioned this or that”. The answer is simple: I can’t handle it all.

Of course many things are going on in Poland. I could for example write about Jarosław Kaczyński lectures for example. The man, who until recently was using his mom bank account, who is completely detached from real life as he travels everywhere in the limo with tinted windows secured by former marines, who never was running any business, or in fact ever worked in private sector, goes to father Rydzyk’s university to speak about economy. He explains that the state is the most important thing and that if someone complains about difficulty of running the business, caused by PiS’s government chaotic changes to law, must be a bad businessman and should find another job. This is pure absurd, and it’s just one of many. But if I wanted to cover all the absurds that are happening in Poland, I would have to write those pieces daily, not weekly.

As Poland tumbles down towards the abyss of surreality it becomes more and more difficult to me to choose what to write about. Therefore I would like to sensitize my readers to do not treat this column as a comprehensive picture of what is going on in Poland. It is not as bad as I am potrarying it here for you, it’s much worse. My idea is to give you some insight into the minds of PiS government and it’s supporters, therefore I am trying to stick to recurring characters and events so regular readers can see for themselves how the PiS state works. This week’s column will look into four issues I’ve covered before.

This young man, for some unknown reason promoted by Antoni Macierewicz as his major associate in Ministry of Defence, is not qualified at all to any of the tasks he is assigned to, making mockery of anything he touches. Just the most recent example will be an “internet portal” he created with an aim to fight alternative facts. He decided to name it “dezinformacja.net” which happens to be, ironically, the best name for it, as this amateurish website is full of PiS propaganda. (I am not afraid to say it, as while Ministry of Defence announced that secret services will be send after Misiewicz’s enemies, their interest seems to be limited only to people “accusing him of criminal activities or placing false information on fraudulent social media accounts”, and I merely say that he is just an incompetent idiot).

But he would not be in any way worth of our attention, as he is just one of thousands incompetent people promoted by PiS to important jobs for their servility. The problem is that he seems to be symbol of the power struggle between Jarosław Kaczyński and Antoni Macierewicz. When Kaczyński is on the lead, Misiewicz gets hidden somewhere or sent for vacation. When the ball is on Macierewicz side, Misiewicz is everywhere, receiving honours from high ranking generals or given some plenipotentiary privileges. Seems that currently minister of defence is in the lead, as not only Misiewicz’s stocks are high, but we have also witnessed return of another Macierewicz’s golden boy: a 21 year old son of his friends, Edmund Janniger (see Meanwhile in Cuckooland 2). In December his father, a dermatologist, was flown from the USA to give a lecture in military medical institution. It has costed ministry of defence over 38 000 zł. Those costs not include lecturer’s fees, as he offered his services for free. Incidentally though, his son Edmund Janniger is back on Ministry of Defence payroll since 1st of December… This seems as a deliberate way to stick a finger up to Jarosław Kaczyński and other members of PiS who are fed up with Macierewicz boys turning this important ministry into laughing stock.

Education ombudsman had to investigate the case of teachers, who dressed in black during black protest against changes to abortion laws (see Meanwhile in Cuckooland 8) Their colleague accused them of “publicly demonstrating their political views”, which in his opinion has no place in public school (unless you are a Catholic priest or nun, that is. In that case you can dress in black and spread your views on abortion as much as you wish). Disciplinary commission was able even to revoke their teaching rights but found them not guilty, possibly under the public pressure. It had emerged, that this collegue was a Solidarity trade union activist, which further angered the public: in opinion of many people, today’s Solidarity turned into PiS side-kick and is a disgrace to a legendary name. Many teachers have left organization in protest.

As I wrote in 15th part of this series, there is major problem with government vehicles being driven by irresponsible maniacs. It might have something to do with purges carried by PiS – according to minister of interior, there is now more than 300 vacancies in Biuro Ochrony Rządu. Last Friday vehicle carrying Beata Szydło has crashed into the tree after an attempt to overtake a Fiat Seicento that was turning left on this junction:

The government is aware about people’s anger on the speeding columns, so they started a campaign of lies. They try to frame young Seicento driver. Propagandist TVP has even prepared a computer animation of the accident, in which the accident takes place not on the junction, where overtaking is illegal, but when driver attempted to turn into an entrance to a private property (watch here from 1:20 onwards). They claim that this time the column was not speeding, but the fact, that armoured limousine was totally destroyed after crashing in a tree 25 metres further down the road, causing serious injures to it’s driver and bodyguard sitting in the front chair suggests that they were not exactly driving 50 km/h. This is confirmed by the fact that before the accident, the column has covered 55 km in 37 minutes. So it seems that it is yet another case of recklessness and ignoring the procedures. Some say that stupidity is defined by doing the same thing all over again and expecting different result. But of course PiS followers have different explanation. Yes, you guessed it: it was an assassination. A quick browse of the comments under the news item on this pro-PiS portal leaves no doubt that the faith in the conspiracy is strong amongst PiS followers.

The other half of Poland has reacted with humour, as can be seen on example of this extremely popular meme:

PiS main aim is to win the historic memory of Poles. This is why they still carry out furious attacks on Lech Wałęsa, as they need to destroy his legend in order to make place for their version of history. This is getting ridiculous at North Korean scale, with the cherry on the cake being president Duda unveiling a plaque commemorating the fact, that parliament had gathered to listen to his speech 2 hours earlier or naming streets after mother of Jarosław Kaczyński (see Meanwhile in Cuckooland 8 again).

Now Ministry of Defence wants to change 100 years old tradition of naming navy ships to make it possible to name one after late president Lech Kaczyński. It is quite problematic not only because since 1920’s assault ships are named after meteorological phenomenons (ORP Burza (storm), ORP Błyskawica (lighting)), submarines after predatory or dangerous animals (ORP Orzeł (eagle), ORP Wilk (wolf), ORP Dzik (wild boar) etc.) and escort vessels are derived from names of Polish regions (ORP Kujawiak, ORP Podhalanin etc.). The new escort vessel is to be named ORP Ślązak, which is not a pleasant name for PiS, as they consider Silesians to be German fifth column, so it was an obvious pick to honour Jarosław Kaczyński’s brother.

But the idea of renaming ORP Ślązak to ORP Lech Kaczyński turned out to be little silly, since it was already named during it’s ceremonial launching in 2015. Therefore the ministry is desperate to find (or build) other vessels that can be named after persons, which can be problematic, as we are rather unlikely to get any new frigates soon (the only two we have, ORP Kościuszko and ORP Pułaski, are former US Navy vessels given to us when Americans decommissioned them after 20 years of service).

If I heard year ago that Polish Ministry of Defence is trying to speed up process of building new navy vessel just to be able to name them after Lech Kaczyński, I would reject it instantly as pure rubbish. Year later, I am willing to believe that they are actually working on it. It’s sad, isn’t it?

Pictures:
1. Edmund Janniger picture: “Rutgers Council on Public and International Affairs” CC BY 2.0
2. Meme based on a picture posted here, author of both the picture and a meme unknown.

4 Replies to “Meanwhile in Cuckooland 17”