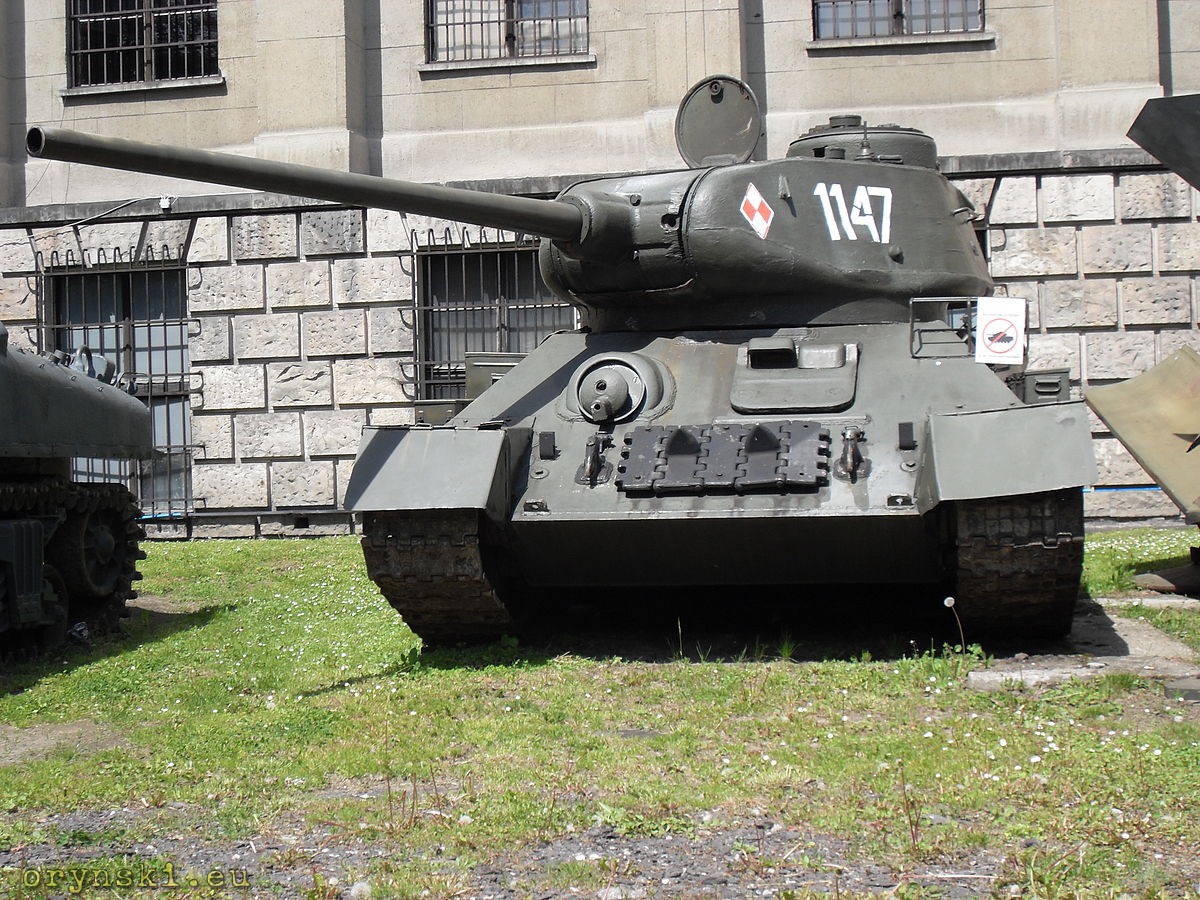 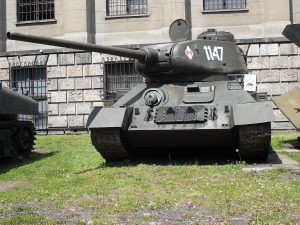 Poland recently do not have a good press. Even in Western media it comes across as a very chauvinist country. No wonder, as the Polish right is so against everything they don’t deem Polish and Catholic enough, that they don’t stop on hating Muslims: even the Polish Luteran Church can be attacked. Meanwhile in Gdańsk a monument commemorating freeing the town from the Nazi hands was vandalized. Why? Because the monument comprises of a first Polish tank that entered the city: it belonged to 1st Polish Armoured Brigade of Defenders of the Westerplatte. So what’s wrong with it? Well, the tank is an T-34, manufactured in Soviet Union.

Apparently those soldiers belonged to the worse sort of people who travel in vehicles manufactured by Soviet Union. The catastrophe of a Tupolev Tu-154 plane in Smoleńsk has been commemorated in almost every way possible and so far defacing any of Lech Kaczyński monuments has been unheard of, despite the fact, that potential vandals have already hundreds to choose from. There is so many of them, that nobody even bothers to report about the new one being unveiled, so I was surprised when one of the newly created monuments has gained some media coverage. And rightly so, as this one was really unique: a priest from Małopolska has planted a bunch of shrubs in the church’s garden in a shape of a plane, and filled the inside of that shape with a white gravel. There is even an infamous birch tree! Just look for yourself. But while a die-hard members of a Smoleńsk cult might find this place worth a visit, I doubt that it would attract any international tourist, even if we would advertise it as a curiosity. Especially if it would have to compete with such pieces of arts like this monument from Kałków.

The fact that minister Szyszko still makes most of Poles ashamed by his fight against European institution that try to prevent him from destroying Polish protected forests is also not helping in promoting our country abroad. He just got some well deserved bashing in the European Tribunal, and he claims to be “surprised by this strange misunderstanding”. Well, there is an old saying that says that a smart person learns on his own mistakes but the truly wise person learns from mistakes of others. So how we should call minister Szyszko, who refuses to learn even on his own mistakes and with the stubbornness of a donkey pushes ahead despite pretty much everyone else’s objections? (He was an environment minister in previous government of PiS, despite a fierce opposition from environmental organizations and activists and the intervention of European institution he pushed ahead with his idee fixe of building a motorway through protected Rospuda valley. Of course he lost this fight, leaving a huge hole in taxpayer’s pocket and condemning people from a local town to keep up with unbearable amount of trucks driving through their town for a couple years more, as the road had to be build from scratch elsewhere, as per one of the alternative proposals avoiding protected area, that was presented in the first place and then rejected by Szyszko).

Even staging rallies in support of his actions in Luxembourg would not make perception of Poland any better, especially if they hold a banner saying in English “Polish youths support minister Szyszko” and the average age of the protester is about 45… Ah, wait, the banner actually says “Polish YOUTS”.

According to Urban Dictionary, a yout is some kind of petty criminal, “who spends his time abusing, threatening and trying to look hard. This behaviour is only exhibited when they are in groups of five or more, as they lack confidence and physical presence to behave such on their own”. That might actually be right for many PiS supporters… And they have to be ones, because amongst other placards they hold is a reminder how much of the Białowieża forest was logged by the Nazis due the war, and war reparation are a trendy subject now.

Of course making idiot of oneself by supporting Szyszko will not make any good for the perception of Poland, but it might help those, who take part in this action. For example former anti-communist dissident and recently a keen PiS supporter Ryszard Majdzik was taking part in such staged protest (more on them here) and as a gesture of gratitude was awarded a highest medal for an exceptional merits to the forestry. Media are still trying hard to find anyone who would be able to tell what were those exceptional merits that made a state forest official to award this distinction to someone who until recent pro-Szyszko rallies was not involved in any way in forestry or environmental activities…

Sadly, Minister Szyszko has nobody to help him out in the European courts. But his pals are much more lucky – they have him. When it has emerged that father Tomasz Duszkiewicz, a chaplain of State Forests and a keen hunter has his summer house decorated with trophies such as skins of wolf and lynx and stuffed tawny owl, which is illegal, as they are protected species, he managed to obtain exception from the ministry in such swift way, that he already had it on him when the article went to print…

So how to repair the perception of our country that has been so damaged recently? Someone could think, that the good way to do it is to create a friendly promotion clip, put it online and hope that it get viral, like this one:

But this is not a PiS way. So how they would do it?
– start a foundation, name in as much Polish and National way as possible. “Polska Fundacja Narodowa” should do well. Tell everyone that it will be used to promote Poland abroad.
– use state controlled companies to pump millions into it.
– then use those millions to start a massive billboard campaign promoting PiS’s judiciary reform.

The slogan makes no sense, even from the grammatical point of view: “Let it stay how it was”? If it was, then it no longer is, therefore it cannot stay this way, as the way it was is already gone… Unless we are trapped into some space-time continuum paradox… But who cares, the billboards are here only to direct you to the new website takjakbylo.pl when you can learn that a judge has stolen a sausage worth 6.90 zł.

How the website in Polish that aim to prove that Polish justice system sucks is to help promote Poland abroad is beyond me. This was pointed out by Adrian Zandberg, one of the leaders of the young social democratic party “Razem”, who discovered that scandal. But of course PiS has explanation to everything:

“Polska Fundacja Narodowa has to take care of the good perception of Poland. Supporting our national brand requires wide activities abroad. But the construction of the good picture of Poland has to begin here, in Poland. It’s our duty to present real facts about what had happened in a justice system” – says the representative of the foundation. According to him, what is going on in Poland now is a process of “decolonisation”. Changes to judiciary system are the first step to get out of being exploited. Of course he also mentions war reparations, as making Germans pay for their crimes from 80 years ago is now running topic in PiS and everyone has to mention it whenever possible.

Of course the fact, that PiS just syphoned 19 000 000 from state owned companies and used it for campaigning for their political goals (despite the fact, that they have their own, party money, that are supposed to be used for such things) is a biggest scandal so far, and it cannot be defended. Despite that, some still try. “It’s like if 19 000 000 of Poles chipped a one złoty each. So what that noise? Who would not want to pay 1 zł for the reform of the judicial system?” asks Ryszard Makowski, formerly a comedian, currently a full-time PiS apologist (although some people still laugh, this time they laugh at him, not with him).

Well, the problem is that those millions are not spend at making Polish courts better, but at the massive action spreading fake news and PiS propaganda. This is an example of hijacking public money for an unprecedented scale – let’s just remember that after the eavesdropping scandal, during which private conversation of the politicians of previous government were recorded in a restaurant (more on that here), PiS, having nothing really incriminating to use, was playing a drum of how Radek Sikorski was eating calamari at taxpayers expense. Meanwhile the money stolen by PiS through Polska Fundacja Narodowa would be probably enough to feed the whole Polish army with calamari for a month or two… And yet nothing happens, PiS still enjoys a vast support in every poll possible.

I have to be honest: I can’t grasp how PiS manages to stay so popular. Was the grudge against previous government so big, that it outweighs all scandals and gaffes committed by the PiS government? Despite accusations of Minister of Defense being a Russian agents, army of the colleagues of infamous Bartłomiej Misiewicz, who, despite completely lacking any professional qualification fill every position possible… Despite changing public TV into North Korean style propaganda, despite the fact, that not only PiS refuses to give up on changes to abortion laws, but also proposes a law that would allow a pregnant women to be institutionalized on suspicion that she could drink alcohol, take drugs or in other way harm her unborn baby… And now deputy prime minister Morawiecki openly admits, that they were lying during the election campaign, when they were painting a picture of Poland as a ruined country (“Poland was not in ruin, nor back then, not before that” – said Mateusz Morawiecki, adding, that it was simply an “pre-election rhetoric”).

And it is not that I am only trying to find something to incriminate PiS. I still try my best to be impartial and search across the whole political spectrum. It’s not my fault that rarely succeed to find any scandals or absurd things coming from the opposition, PiS simply delivers them in numbers outgrowing others by the order of a magnitude – this week for example the only story on the opposition I managed to find was that of a Platforma Obywatelska MP skipping a queue to the toilet and abusing a journalist who tried to challenge him for that…

And yet, PiS still enjoys the same level of support as it did nearly two years ago. Do people really believe Kaczyński, when he said, that “If we will be left alone in Europe, then so be it”? Those words were spoken during last Smoleńsk month-inversary, as usual Kaczyński was surrounded by army of the police and kilometres of the fences. And yet he said, that even if isolated, Poland will remain “an island of tolerance and freedom, of all what was so strongly present in our history”. It’s scary, because there is already one country, who’s rulers are committed to endure as an island of the freedom and true democracy, to be faithful to the ideas that were present in their history for long time. It goes by the name of “People’s Democratic Republic of Korea”, and it’s neither people’s, democratic or a republic, and it is not even the whole of Korea. Just like Prawo I Sprawiedliwość has nothing to do with a law and justice…

This piece was published in Britske Listy
Picture of the tank by Ferran Cornellà – CC BY-SA 3.0

One Reply to “Meanwhile in Cuckooland 37”