Finally, a long-awaited revolution in Polish oncology! After the Senate rejected PiS plan to pour nearly 2 billion złoty into TVP – PiS’ propaganda machine, the bill came back to Sejm, the lower chamber of parliament. The opposition proposed to spend that money on Polish oncology instead. In Sejm the bill was sent to the parliamentary commission of culture. In there, Joanna Scheuring-Wielgus of the Left was unexpectedly elected as a rapporteur. She intended to advise the parliament to drop the idea of pumping more money into PiS propaganda machine and use that money for other purposes – she gave examples of medical devices purchased for Polish hospitals by Wielka Orkiestra Świątecznej Pomocy – 2000 of modern ambulances, 300 000 insulin pumps, 36 000 kits for the neonatal resuscitation are just a few examples of all the equipment supported by WOŚP so far. She pointed out, that the 2 billion the government wants to spend on PiS propaganda machine is near twice as much as WOŚP raised over 28 years of its existence.

Her election was possible due to the fact that some commission members from PiS were not present. This was quickly fixed the next day when there was more PiS MP’s present. They demanded to vote again, arguing, that debate in the main chamber of Sejm needs to be substantive and Scheuring-Wielgus is likely to make it about politics. As it was to be expected, the opposition lost and Joanna Lichocka, herself a former TVP journalist, known for her pro-PiS bias, was elected a new rapporteur.

As it was then to be expected, she referred the case, mentioning the situation “In the morning of 12th of February a Commission of Culture gathered and kind-of randomly the opposition had a majority there for a while” – she joked from the rostrum. Of course, she recommended that the parliament votes for extra funding for TVP, saying that the idea of cutting the funding to the PiS controlled TVP is “scandalous”. Of course, the parliament, having a PiS majority, voted the bill through. Lichocka celebrated it by showing a PiS’ version of the victory gesture towards the opposition benches:

Kaczyński was not amused, so she had to explain herself to him:

She claimed (also later in the media) that she was merely wiping her ear. But was she, really? Judge for yourself, let’s take a look at another picture:

Adrian Zandberg from the left intervened with Kaczyński, but in a typical PiS manner, the only answer he got was that some people booed at Andrzej Duda in Puck. Still, that provided yet another perfect photo opportunity which was caught by a photo reporter from Gazeta Wyborcza: 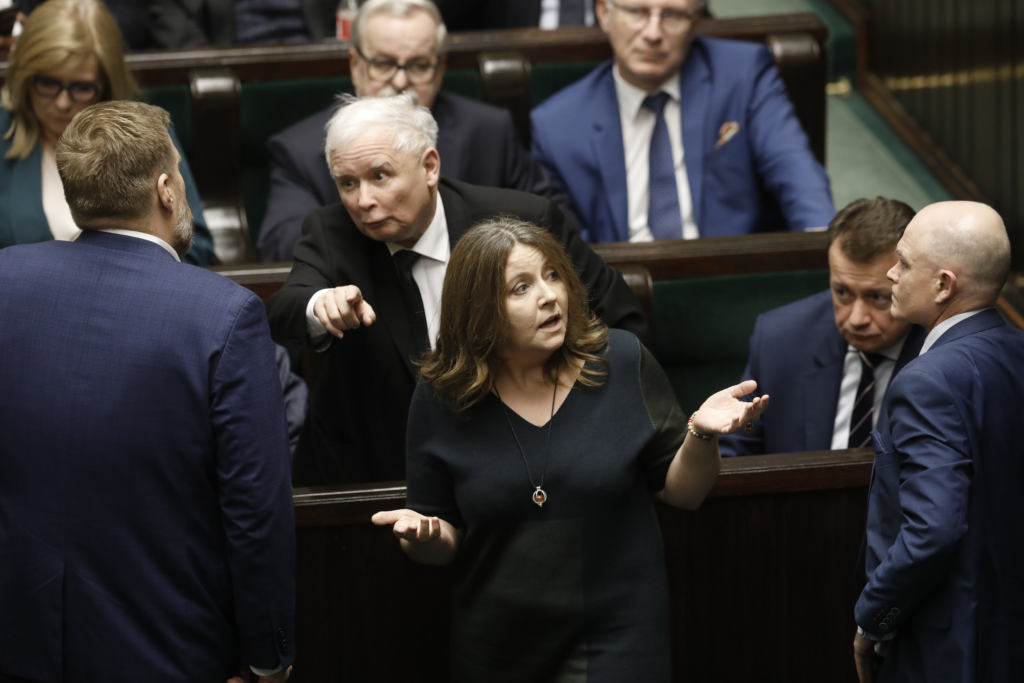 Kaczyński’s argument was then used by freshly pampered TVP. According to them:
– Lichocka’s gesture was innocent, she merely wiped her eye.
– the opposition takes it out of context.
– Lichocka apologized (to those, who “felt offended” – TO), so it’s alright. Meanwhile, the opposition never apologized for the fact, that some people booed at the president during his visit to Puck
– they pulled from their archives examples of opposition politicians saying some unfortunate words, some as old as 2005.
– then it informed that it’s the opposition fault that the Polish hospitals are underfunded, because, as usual, Donald Tusk.
– finally, they begin to praise themselves, informing their viewers how cool television station they are, because they are very patriotic, unlike Donald Tusk, who would rather let Russia keep the money they owe to Poland than fund Polish oncology.

Donald Tusk, meanwhile, commented it in his usual, minimalist style:

But you propably wonder how i drifted away from the promise given in the first lane of this chapter: I was to write about revolution in Polish oncology, and yet it is clearly visible that nothing is going to happen in that field. But fear not! Just look at this headline. It says “Patients were WAITING for this! Relics of St Faustyna given to the Kielce Oncology Hospital!”

And so you have it, PiS politics in the nutshell: no funding for hospitals, but you can always try praying. Or, if you’d rather watch the TVP, you can learn about miracles. Recently it had informed, that a piece of a holy wafer that has been dropped by a priest in Legnica back in 2014 has indeed changed into a “piece of a dying heart muscle” and that it has been confirmed by scientists. The portal Oko.press have spoken to those scientists who denied that they were ever able to confirm the church’s claims. Apparently, TVP is lying not only about current politics.

And even prime minister’s Morawiecki own 17 years old nephew is fed up with that. He recently came out publicly as gay and announced his plans to organize protest against lies spread by TVP. But nobody was surprised to find, that just a few days later he resigned from organizing that protest, arguing, that “TVP is not the only one who lies”. I don’t blame him – at 17, your parents still have a lot of power over you…

But, back to religious stuff. It seems that under the rule of PiS and the Church, Poland is indeed turning back into the middle ages. In Kaszuby, local Catholic churchgoers protest against the renovation of the folk sculptures, depicting the mythological creatures and Slavic gods from the pre-Christian era. And it’s not just some local people in some villages in the middle of nothing. Minister Ziobro himself used the strongest weapon in his arsenal – an “extraordinary intervention” – to undermine a retired teacher, who won a compensation claim after being bullied for taking down a cross in the teacher’s room at her school, that was hung there without consultation with the staff. Of course, it’s not that he went straight to the big guns – no, he used every way possible to overturn the verdict, but he lost in every single instance up to the High Court. Which shows you, how much power politicians have to bully people they don’t agree with. (In other news: there will be no investigation into the case of Jarosław Kaczyński refusal to pay an Austrian developer for the work provided to his shady business enterprise – see more here. Is anyone surprised?)

And not everyone has balls like Roman Giertych to stand up to this. 15 years ago a politician and a coalition partner of Kaczyński, today a lawyer and a fierce critic of PiS legal reforms, when called to a Disciplinary Chamber of the High Court – the newly created body deemed to be illegal by the High Court and investigated by EU institution – he refused to stand up for the entrance of the judges. Giertych then made a speech, in which he pointed out, that this is not a court, that the “so-called” Disciplinary Chamber is in fact just an organ of the PiS party and not of the Polish courts. The “judges” tried to reprimand Giertych, to which he answered, that they cannot reprimand him, because they are not judges. The “judges” then decided to adjourn and left the room while the public shouted “Shame, shame!” at them. Finally, they gathered together but this time Giertych was not allowed inside the room for his own hearing, during which he was fined 3000 zł in absence.

Giertych announced on his social media that he is not willing to pay, even if they change the fine to 7 weeks of arrest, arguing, that if he paid, he would, therefore, validated the Chamber’s claim to be a genuine body. Deputy minister Kaleta tried to respond to him, pointing out that the fine will be executed by bailiffs, after which Giertych answered: “if you, boy, have studied a bit of law, instead of going to Smoleńsk anniversary celebrations, you’d know, that what you say applies only in civil cases. I got fine from your so-called court, which is handled differently”.

Surely, deputy minister Kaleta has a talent to make an idiot of himself on social media (see two previous chapters of this series). And he is not the only one. Dr Wojciech Muszyński, a historian from the Institute of National Remembrance (IPN) has read an interview with Maciej Konieczny, MP from left-wing “Razem” party and felt the need to comment it as follows:

“In 1973 in Chile, members of Razem party would be carried in helicopters over the ocean and then set free, 30 km from the shore”.

Maciej Konieczny wrote a letter to his superiors, but according to IPN, there is no problem, as Muszyński was proposing political murders on the left-wing politicians in his spare time. It is characteristic that such people are working in IPN – dr Muszyński has nearly no academic achievements, he is mostly known for books for children, in which he promotes radical right views on the history. And PiS has a strange relationship with the radical right. In what other countries during the opening of the presidential campaign, the president would be accompanied by a neo-Nazi activist known for burning an effigy of the opposition politician (prosecution found no crime – anyone surprised?) and supporting Marian Kotleba, leader of the Slovakian neo-Nazi group.

But, let’s finish on a positive note. There are also some good things happening in Poland. The first bit of good news is that the court ordered two curias, who protected a paedophile priest by moving him from one to another, to pay 300 000 zł damages to his victim. This is yet another example of that paedophilia in Polish Church will no longer be tolerated by the courts (at least unless PiS takes them over completely, that is).

The second bit of good news is that the construction of the new coal power plant in Ostrołęka will finally be abandoned. It was supposed to be last coal plant ever built in Europe, but the idea was abandoned already back in 2012 when the investors found that building a new coal plant makes no economic sense. The PiS government tried to resurrect the idea despite fierce protests of environmental organisations. But even with government support, the idea failed to attract investors. And rightly so!

Last but not least, we have become an object of envy of French and Germans again. At least this is what Minister of Infrastructure said during an opening of 7km long Sanok bypass.

I’ve decided to fact-check this claim. I gathered all the available data and placed it in a table:

Apparently they indeed do have a reason to be envious!