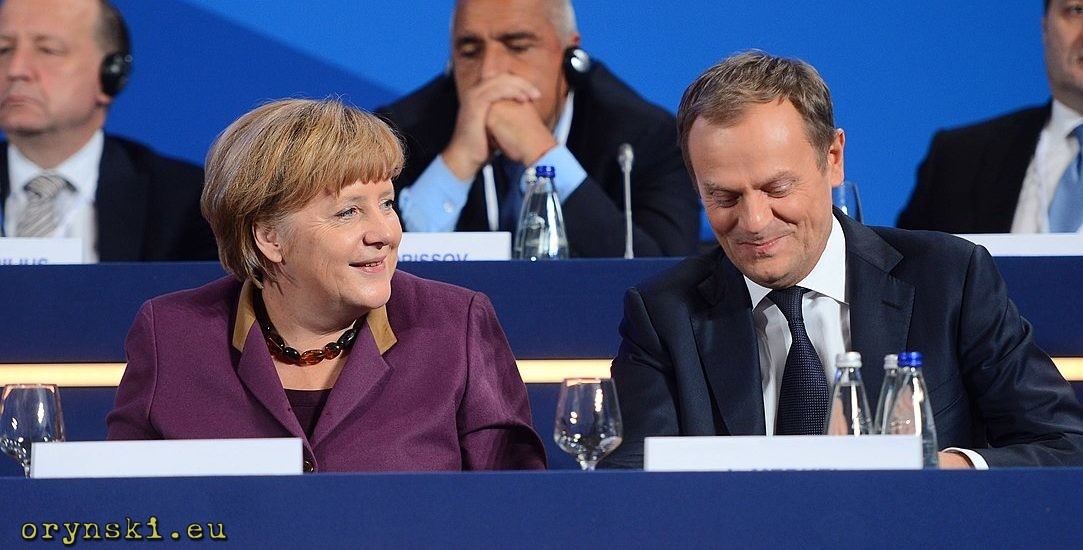 If you’re interested in Polish matters, you might have noticed, that recently several new English-language media outlets have popped out like daffodils in the spring. But caution is advised: portals such as Polandin.com or THEfirstNEWS.com are run by government-controlled state media and are an attempt of counterbalancing alarming news from Poland in Western media with some of the government propaganda translated into English. As if that was not enough, the state-controlled media in Poland use them to create fake news. Recently, for example, TVP.info published a piece about how British media praise Poland for its fight with COVID-19. Those “British media” turned out to be the aforementioned The First News…

And so from those “news portals” you can learn how president Duda took part in #Hot16Challenge2 in which celebrities are asked to rap in order to raise money to help the health service (infamous Janusz Korwin-Mikke also took part, rapping about murdering socialists and jailing democrats). But you won’t read about how just a couple months earlier Duda signed a bill allowing the government to spend 10 billion of Polish złotys on government propaganda instead than on hospitals… But he is just a puppet and Kaczyński enjoys reminding him about that. In exchange for this signature, he demanded the head of Jarosław Kurski, chief of TVP. Kurski gave up his job and ended up as an “advisor” to TVP, from where he continued to rule from the back seat. But as if that was a slap in Duda’s face not big enough, his replacement decided to do not try to get this job permanently, saying that Kurski is the best candidate… (Does anyone want to bet that Kurski will be back at his job in no time?)

It’s no wonder that many Poles would like a chance to get rid of that cardboard presidential figure. Others would like to vote for him to express their support for PiS. But none of them had a chance.

In an unprecedented event, last Sunday in Poland we had Schrödinger’s elections – that took place and did not take place at the same time. How did this happen? Buckle up, you’re getting for a tough ride:

As you might remember from previous chapters of that series, the only legal way to postpone elections would be to introduce a state of emergency in Poland. Kaczyński refused to do so, despite raging pandemics, because he sees how his government’s inability to tackle the crisis angers Poles, which can result in the fall in the number of his supporters. Frustrated entrepreneurs are not the only ones who took to the streets and clashed with the police. Therefore while downplaying the epidemics, the government prepared a plan to carry on a postal vote. Of course, it was impossible to organize such a thing on such short notice so the State Electoral Commission was not too keen on the idea. Therefore some paragraphs were added to the anti-crisis bill voted in Sejm and, as a result, the prerogatives to organize those elections were taken away from Electoral Commission and instead granted to the government – to the minister of state assets Jacek Sasin. He’s a member of the government that breaks the law in every way possible and a man, who organized that tragic flight to Smoleńsk – what could go wrong?

As you can remember from the most recent episodes, Jacek Sasin took off and went to organize elections even without having any legal basis for it, as the bill on the postal vote was passed to the upper chamber of the parliament, where the opposition has a majority, so the senators took all the time permitted to look closer at this hastily prepared bill. In the meantime, in Sejm, there was that whole kerfuffle with Jarosław Gowin, Kaczyński’s minor coalition partner, who could not make his mind if he is to support Kaczyński on that or not. Eventually, the Senate rejected the bill and the postal vote topic came back to Sejm. By this time – 4 days before elections – it was clear, that Sasin’s preparations resulted in complete chaos – the election ballots leaked and were thrown onto the streets, some jokers also delivered false ones with the PiS phone numbers on them to homes, which resulted in confused people calling PiS offices en masse. The rejected bill still had to be passed- to help Sasin if he’ll be ever accused of wasting public money on organization of illegal elections, and PiS was doing everything to ensure majority: according to Paweł Kukiz PiS even tried to bribe his MP’s to go to the toilet during the vote. Finally, they managed to do it.

Meanwhile, Speaker of the Parliament asked State Electoral Commission (remember, the one that had the organization of election taken away from it) if they can organize elections. Obviously even if they had the right to do so, it would be impossible to do in three days, so they said no. She then decided to ask Constitutional Tribunal if it would be legal to postpone the election. As one expert commented “she could as well ask them for a cheesecake recipe”, as this is not in Tribunal’s prerogatives (also, how is that everybody forgot that when PiS “reformed” the Tribunal, the cases were to be answered on “first-come, first-served” basis, so with 2 years of the backlog it would be silly to receive a response in three days.)

But then Jarosław Kaczyński and Jarosław Gowin saved the day. Duumviri of two regular MPs decided that elections will simply not go ahead, and then the Highest Court will rule them void. This was announced just after the debate of presidential candidates has finished (although Andrzej Duda got extra screen time after – which does not surprise anyone – and two other candidates decided to continue the struggle in the form of illegal street racing). So if we believe Kaczyński, the elections will happen on the 23rd of May. Or the 12th of July. Or sometime else. Nobody knows. But one thing is sure: It is not that important who is to win those elections if/when they finally happen. The important bit is that Poland already lost. Because nobody seems to care that two men with no function in the state just decided, simply like that, that elections will not happen. There is no investigation, no protests, not even a word uttered from the government, president or the opposition. Everyone just got used to the fact that it is Kaczyński who decides what is going to happen in this country. As one Polish writer once said “It’s clear that we are in the ass. The problem is, that we are starting to make ourselves comfortable”.

But those Schrödinger’s elections put us in uncharted territory. Some point out, that legally for the elections to be considered void, there have to protest against the results. Those need to be announced first but how you can announce results of the elections that never happened (although I can imagine TVP doing that “Andrzej Duda received as many votes as it was expected. Not a single person has cast a vote on any of his opponents”)?

And then, there is a problem in the High Court. With the end of April, the previous chairwoman’s term has ended. PiS quickly appointed their man, Kamil Zaradkiewicz, as acting chairman. The problem is, that man is not even a properly appointed judge. He used to work in Constitutional Tribunal from which he was kicked out when he supported PiS’s hostile takeover of that institution. During his time there he allegedly mobbed his subordinates and on one occasion turned up to work at 3 am in his pyjamas, high on shrooms. More recently he also allegedly sent Krystyna Pawłowicz – a PiS appointed member of the constitutional tribunal – a picture of his anus, although I personally don’t believe in that rumour: how could she recognize that it was his anus, especially since he is gay?

Anyway, this is a man who is now in charge of the high court. He acts in a typical PiS manner – he has begun with removing portraits of some of the former chairmen of the court and starting disciplinary action against a man who contests that Zaradkiewicz is legally appointed judge. Now he is to supervise the election of the new chairman, so he denies right to speak for the legally appointed judges (those appointed by PiS are still a minority), changes the rules as he sees fit and finally, when the vote did not go the way he wanted he said that the votes weren’t counted correctly, adjourned the meeting and went home.

Luckily, the State Electoral Commission adopted a resolution to treat the elections as they never happened, so the High Court will be unable to rule if they were valid or not anyway. Now it’s for the speaker of the parliament to announce new elections within 14 days.

Meanwhile, a blame game within PiS begun. Some blame prime minister Morawiecki, others minister Sasin. The government claims that money spent on printing illegal voting ballots are not wasted, as they can still be used in the future and that they are not to blame.

So who is? Let’s give a voice to one of the ministers. He says that “this attack on Sasin is a smokescreen” to hide the fact that it’s the opposition that is to blame. And Sasin, together with other PiS politicians hated by Platforma Obywatelska, are people who over the last 4 years fought with mafias that were allowed to leech of the Polish state during the rule of the previous government. “I can imagine such situation” – continues the minister – “that Angela called Donald Tusk and told him “Donnie, listen, you need to do something, you need to attack Jacek Sasin! He is responsible for the most important Polish energy companies, he is in our way, obstructs our plans to sell to Poland gas from Nord Stream pipeline, you need to attack him, to find a pretext, so they came with the pretext, with these postal elections that did not take place, and for which speaker of the senate from the opposition was responsible”.

So it’s clear now who is to blame for that instead of using existing legal solutions to postpone elections in the time of the pandemic, Kaczyński decided to contrive and meddle with the law so much, that he spun out of control and crashed. It’s Angela Merkel.

BREAKING NEWS: According to the paper Rzeczpospolita, Sejm is now going to work on another election bill, which will make void the postal vote one. The one, that with great difficulties was fought over in the Senate and then pushed across last Thursday, signed by the president last Friday, that came into power last Saturday and that was totally wasted last Sunday when elections did not happen. Apparently, for PiS the only way to dig out of the hole they pushed us all together by constantly changing hastily written laws and losing the plot is to continue to do exactly the same.

This piece was written for Britské Listy
Picture: EPP.eu via Wikipedia (CC 2.0)