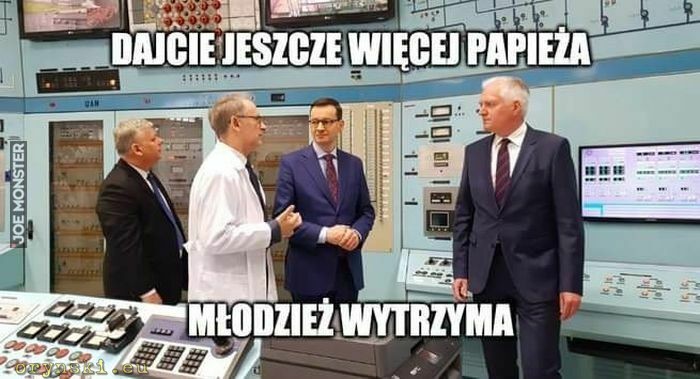 The never-ending series about Daniel Obajtek (see previous chapters of that series), a “wonderful manager” and one of Kaczyński’s favourites, who turns out to have a lot of shady deals left and right, and by now looks like the king of crooks – if we believe independent media and the opposition – follows the Alfred Hitchcock advice: it stared with an Earthquake, and now it only goes better.

Only last week we have learned about how he bought a luxury apartment at half price – compared to what his neighbours paid for the flats in the same building. Soon after his company Orlen became a sponsor of a football club belonging to the developer. His other property, a mansion near Kraków, has also a very peculiar story. Daniel Obajtek bought a building plot there back in 2007 when he was a mayor of Pcim, so his finances were under public scrutiny. A few years later he gifted that land to his brother, who was employed by state forestry. Apparently, his brother shares his unique managerial tales, as in just two years a luxury mansion with a swimming pool has been built there (mortgage-free) – some estimate it to be worth 5 000 000 złoty, others say it’s more like 1 500 000, but in any case, you have to say this is an enormous achievement if someone is employed in the forest at the salary of 7000 zł per month. In 2016 Obajtek’s brother gifted the land (and the mansion) back to Daniel Obajtek – and since gifts in the family are tax-free, he basically got a free mansion from a brother who would never be able to afford it. And as if receiving nearly 50% discount on the flat and free mansion was not enough, it just happened that they laid new tarmac on the road and it ends just in front of Obajtek’s driveway…

Of course, the opposition and the private media are outraged and demand for the matter to be investigated. But the thing is that by now there are no independent institutions in Poland who could do such a thing. Daniel Obajtek himself knows that very well and announced he will seek for Central Anti-corruption Bureau to investigate his finances. He knows perfectly he has nothing to be afraid of: the CAB has investigated his finances before and found nothing out of order. Incidentally, several former agents of the CAB are now enjoying cosy sinecures in Orlen, the oil giant that Obajtek is a CEO.

Usually, we could hope that the Supreme Audit Office could step in, but its chief is still in the clinch with PiS after they wanted to remove him for his own shady businesses, but was unable due to the materials he has on them (more on that here). All this shows, that Poland under PiS simply became a mafia state, and they can do everything they want and laugh Poles in the face, as there aren’t any independent institutions to keep them under control left. Luckily Poles still have the strength to laugh back at them, and when the news emerge every second day or so about yet another property belonging to Daniel Obajtek, they said, that PiS promised 100 000 new homes and delivers on that promise, it just the small print was that all of those 100 000 homes will belong to Daniel Obajtek…

Another energy company boss is not so successful when it comes to construction. After one of PiS’ flagship projects – a coal energy plant in Ostrołęka was halted, two giant towers that have been already built now have to be demolished. It will cost the government-controlled companies (so, ultimately energy consumers and/or taxpayers) nearly a billion.

Luckily some companies don’t register such gigantic losses. One of the richest Poles, owner of the window factory and god-fearing Catholic had some money to spare. He decided to use it in God’s way. So what do you think he did: has he fed the poor, helped the sick or housed the homeless? No. He decided that the best way to spread Jesus’s teaching is to literally plaster all of Poland with anti-abortion (and anti-divorce) propaganda. In some places, his billboards with a child in the womb, foetus’s feet or slogans written in pretend child writing cover more than 40% of all the advertising space…

At market value, such a campaign could be worth as much as 5.5 mln zł PER MONTH (although in the times of Covid the outdoor advertisement space might be available at a discount price). Still, just to think how much ACTUAL HELP to people in need could be provided for that amount of money… Some activists decided to rebrand this campaign and spraypainted slogans on those posters, such as “would you still love me if I was gay?”

Other entrepreneurs decided to spend their money on the real needs of the Poles. A developer in Kraków had a ridiculous idea to build an apartment block over a smaller house and a workshop. That was of course rejected by the urban planning and the (illegally started) construction has been stopped. But last year the construction laws were relaxed to allow for swift construction of the pandemic related infrastructure, so the developer is to finish it – as a mixed-usage building: partially PPE storage, partially a quarantine hotel for people infected with COVID. I strongly encourage you to click this link and browse pictures of this monstrosity.

Some opposition politicians also try to get a foot into the construction business. A young MP from ultra-right-wing Konfederacja bragged on Twitter that “in his spare time he works cash-in-hand, illegally, as an interior decorator”. Yes, an actual MP publicly brags on Twitter about his tax-avoidance. Actually, painting walls seems to be a popular activity amongst the extreme right. In Wrocław, a mural promoting equality that has been regularly defaced with racist graffiti (see here), finally got completely covered with white paint, a huge Celtic cross and a sign saying WHITE POWER. And if you still had any doubts, after that was repainted with plain blue, the Celtic cross almost immediately came back with the information that “this is our town!”.

But still, this is not the worse. Recently several dozens of women right NGO’s and activists received bomb threats. “The bomb is already in your office. We are going to blow up. We don’t care about your fate, you have been warned, all fault lies in you. Abortion is murder, life for life, blood for blood” – wrote that anonymous Christian. Not too Jesus-like, if you ask me, but what do I know.

Meanwhile, the government wants to ensure, that it will be even more illegal for gay people to adopt children than it is now. The newly proposed law will force the adoption centre to check if the prospective parents aren’t gay. If that would be hard to establish (for example because the potential parent is single and does not share a household with another person of the same gender), they will have to swear under oath and will be punished by law if they will be found to be gay later. It is unclear if in that case their kids will be taken away from them, what with gay parents who raise their own kids with their homosexual partners, or if bisexual people will be allowed to become parents… According to justice minister Zbigniew Ziobro this is just him observing the constitution, and since the Polish constitution says that “marriage, as the relationship between man and woman, is under the protection of the state”, then other kinds of marriages are illegal, and so are other kinds of families. This is an utterly stupid argument since just in the next paragraph the constitution say that veterans, especially those crippled in the war and independence struggle, are also under special protection and yet nobody even tries to argue that it is illegal in Poland to NOT be a disabled army veteran…

Seems that everything that is not just plain, catholic sex in order to make kids is frowned upon in today’s Poland. The Minister of Culture sacked the chief of the National Film Archives because the Women’s Film Festival included a 7 minute long documentary about a vibrator factory. A short animation about verbal abuse against women was also frowned upon – probably because it included quotes from a prominent PiS politician (and a judge of the puppet Constitutional Tribunal) Krystyna Pawłowicz, known for her extremely rude and boorish language. The whole festival was also cancelled just a day before it’s opening day.

Meanwhile, the ministry of education analysed the school curriculum and found out, that even in the handbooks introduced in 2017 by PiS there is too much “political correctness” and “left-liberal concepts” and not enough about Church and Christian values. They definitely can’t read the room, as Poles are clearly fed up with church already – even bishops publicly admit that the record number of apostasies is worrying (for them!). A meme, clearly inspired by a scene from HBO drama “Chernobyl” in which we see the control room staff just before the explosion, shows prominent PiS politicians in the control room of an electric plant saying “Give some more Pope, the youth will hold OK!”.

But if you’re one of those people who worry, that the youth don’t get enough national-religious content at school, don’t panic. That can be fixed later, by media. Jacek Międlar, a man whom Great Britain considered to be a hate preacher and denied him entry, a man with views so fascist and anti-semitic that even the Polish Catholic Church was unable to tolerate him as a priest, just boasted that he became a member of the Polish Journalist’s Society. Ok, this Society has been long time taken over by PiS and no decent journalist would want to be associated with it any more, but still, this is too far even for them. The chairman of the association says “it was a mistake” and that he “didn’t notice whose membership he places his signature on”, but it just happens, that one does not become a member of this society by just applying and paying membership fees. You need to be introduced by existing members and can show significant journalist’ portfolio – when someone wanted to sign me in nearly 20 years ago, when it was still a respected institution, my publications in a student magazine that printed up to 100 000 copies of each issue was, allegedly, considered not sufficient to validate my membership. Nowadays apparently all you need is to start a vlog on youtube in which you preach hate to your neo-Nazi friends.

But at least the church finally wants to put an order in his ranks. A man, who reported his local church to the police for overcrowding – in breach of the COVID limitations – has been harassed and threatened by his local community and now is being summoned to explain himself in Curia: he was sent a letter with a date he is supposed to turn up there and threatened with “canonical consequences” if he fails to attend.

If only the church was so tough on their paedophile priests as it is on people, who are concerned about public health in the time of pandemics…

This column was written for Britské Listy
Author of the meme: unknown.