It seems that Mateusz Morawiecki is a bit washed down and his replacement is being prepared. Therefore Orlen CEO and trusted man of Kaczyński, Daniel Obajtek was (I guess, ironically, as this is the man responsible for taking over independent local media) named “Man of Freedom 2020” by the pro-PiS weekly “Sieci”. In a cringe-worthy spectacle when the most important people in PiS and Poland were running over each other to kiss his ass. The winner of this competition has to be minister Warchoł who said “Napoleon Bonaparte said, that there is no impossible things for Poles, just as he knew director Obajtek…”

But this embarrassing spectacle just amused everyone. There was another nomination, that made everyone angry: The new chair of the regional office of the Institute of National Remembrance (IPN) in Wrocław. Tomasz Greniuch, long time activist in a neofascist organization “ONR” although has PhD in History from the Catholic University of Lublin, is most known from his 2013 book “The path of the nationalist”, in which he glorifies Leon Degrelle, a Belgian SS officer and, after the war, a holocaust denier. “This is the road that every true son of every true nation should follow” he wrote. According to him, the “Roman salute” – as the right-wingers in Poland call the Nazi salute – is just a greeting of Arian Europe, and as such, an important gesture rooted in Polish tradition.

Since several pictures show that he indeed is very fond of greeting his friends with the “greeting of Arian Europe”, his nomination to such a prominent post in the institution that shapes Polish historiography caused a huge scandal. IPN initially tried to defend him, by informing him that his uncle died in Auschwitz as if that was supposed to make things better somehow. Strangely, there was nothing about his academic achievements, but they published a picture of him laying flower under the monument to the victims of Kristallnacht. That surely proves it, he’s not a Nazi. Right?

But of course, it was a lost battle, and he had to give up his new job. But will that solve the problem of the fascists taking over this important institution? From what I understand he will continue in his old job at the Opole IPN office where he worked for the last three years. And he is not the only IPN employee with extreme-right inclinations. Moreover, it’s not only the IPN: recently one of the publishing houses took advantage of the fact, that Adolf Hitler works are now in the public domain and for the first time in history published Mein Kampf in full, unedited version in the language other than German. All 4000 copies have been sold and they now have to print more, which is unheard of for such a specialist, academic book (the publisher says it’s a critical, academic publication prepared by a specialist on the topic of Nazi propaganda). Somehow I doubt thousands of people buy it for their academic research, or to read as a warning…

Anyway, president Andrzej Duda has been on his ski holidays, but he came just in time to jump the bandwagon and criticize the new chief of the Wrocław’s IPN. And he happened to forget, that just 2 years ago he himself awarded Greniuch with a high medal for his merits in “promoting knowledge about Cursed Soldiers” (Cursed Soldiers are members of the post-1945 anti-communist partisan movement, of whom many (included the one mostly promoted by Greniuch) are war criminals, who carried ethnic cleansing or murdered members of ethnic minorities).

Perhaps Duda forgot, as he was in rush. He was rushing so badly, that his column got filmed driving through an emergency vehicle lane created by drivers who got stuck in a traffic jam after an accident:

Either way, this is history. Most Poles care about current affairs. And there will be further lock-down, president is back from his ski holidays, so the government can close the ski resorts now – joked Poles. And guess what? The joke might come true. According to RMF FM, the government plans to close them indeed. Although I wonder why they even bother any more. After concerned citizens reported Kaczyński and his entourage visiting his brother’s grave in Wawel Castle in April 2020, in the middle of the lock-down, the court ruled that they also haven’t broken any laws, as the lockdown was illegal. So the story ended up for them just as for thousands of Poles who were cleared by courts before. Except that those Poles are harassed by Police, and Kaczyński is protected by it.

Meanwhile, we’re nearly a year into homeschooling. No wonder, that the government got busy to provide some high-quality homeschooling for children. The pinnacle of this effort is a new online game about Pope John Paul II. It was designed at a cost of 790 000 zł, and I tried it to you to find, that it’s utterly boring and, despite claims, that it will be useful during the classes of Polish, citizen education, biology or geography, it’s just a pile of the church propaganda full of useless factoids.

First I tried the version for kids aged 6-9. By playing the “game”, which is nothing more than a glorified, clickable power-point, they can learn such interesting facts like that Karol Wojtyła’s baptism record can be found in the parish’ records on page 549 under the number 671 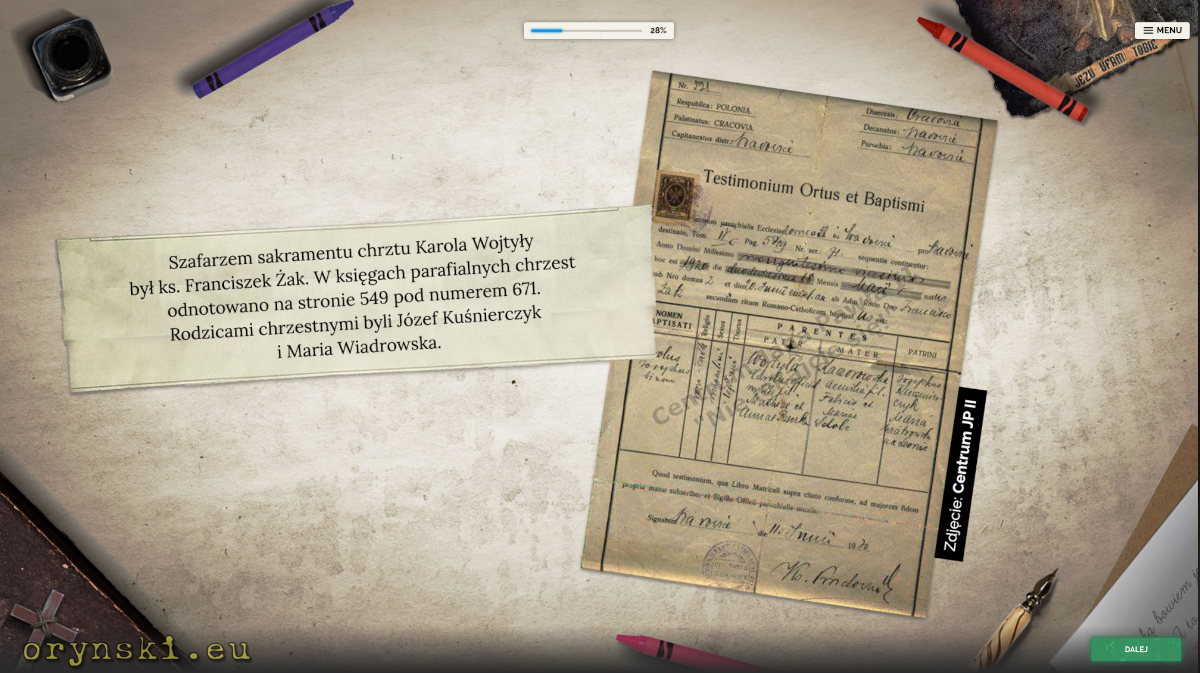 Later the game takes kids for the travels in the Papamobile (“during his first pilgrimage to Poland Pope’s papa mobile was specially designed Star 266 Truck, but his favourite one was based on Fiat Campagnola”) around “Pope’s Poland”, which consist of three places: his birth town Wadowice, Kraków, where he was a bishop, and Kalwaria Zebrzydowska, where, as the game teaches us, he used to go for excursions: 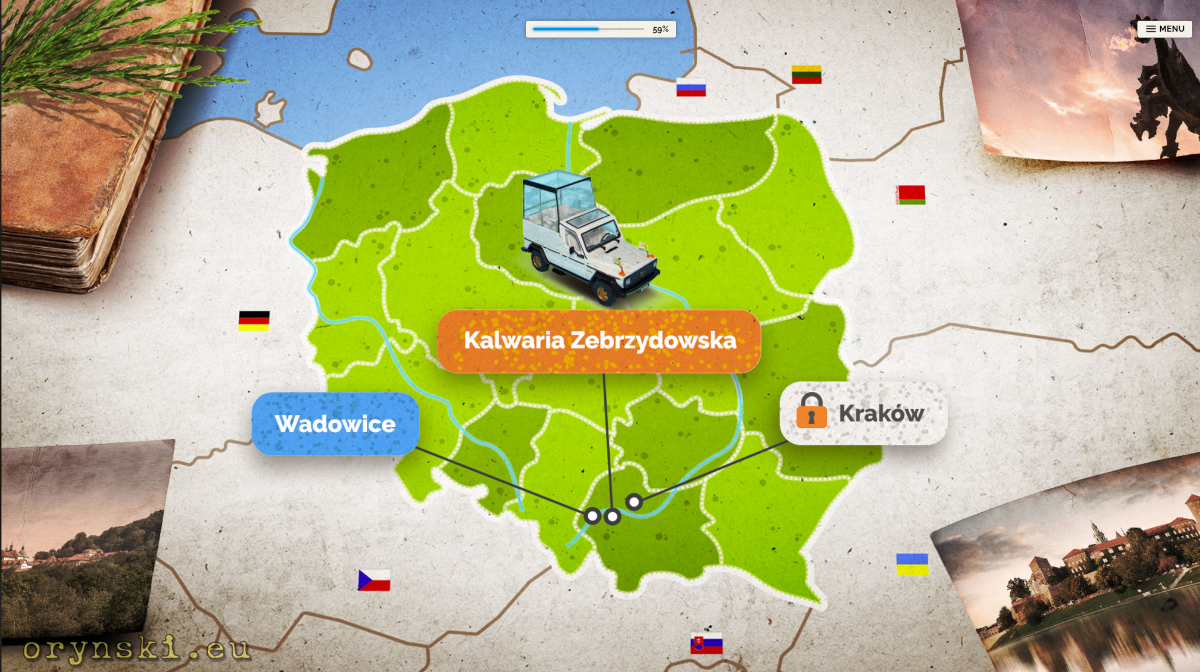 Kids are encouraged to plan an excursion for the young Karol Wojtyła by matching the names of the churches to their locations on the map. I can’t see how knowledge of the local churches in Kalwaria Zebrzydowska has to be beneficial to anyone, or even why one would be expected to know their locations (unless the hit-and-miss method I was forced to use is the preferred way to complete this task). 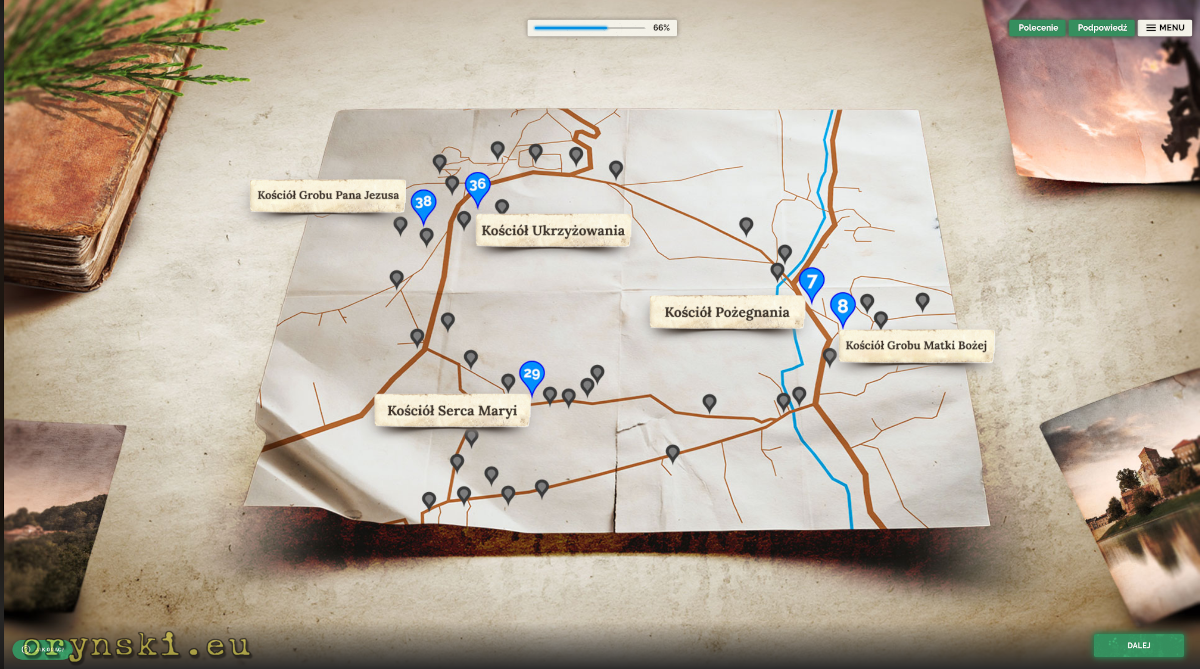 After that I tried the version for the older students – I picked the topic “Pope vs Young ones – World Youth Days”. Here, after picking one of the locations of World Youth Days – Częstochowa – I found the first (and last) instance of the game being actually useful for anything: one of the question in the quiz was “in which voivodship Częstochowa is located” which can be considered a geography question. But we then soon came back to the church’s senseless babble and I was asked questions such as:

What is the biggest secret of a Christian calling:
a) we are supposed to become God Kids in Christs through the Holy Ghost
b) we have to do good to all people
c) we have to submit Earth to ourselves

If you are curious, the correct answer is a) and not, as some could expect, b).

The next question follows this issue deeper, and so we’re asked: 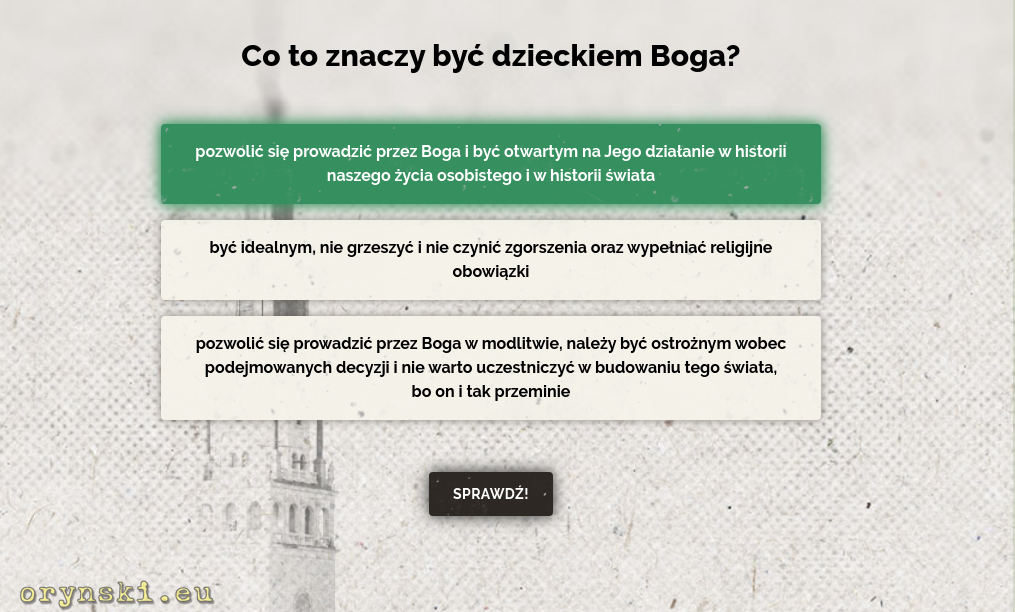 What does it mean to be God’s children:
a) to allow God to lead us and to be open to his acting in the history of our personal lives and in the history of the world
b) to be perfect, do not sin, do not scandalize and observe one’s religious duties
c) to allow God to lead us in prayer, one has to be careful about the decision taken and it’s not worth to participate in creating this world, as it will whiter away anyway.

You might wonder what does it have in common with Częstochowa, but luckily, some questions were related to the Holy Picture of Black Madonna, and so you could be asked:

What can best understood at the feet of God’s Mother?
a) what does it mean to be God’s children, sons and daughters of God
b) one’s moral duties
c) one’s outside freedom

I got a bit bored, so I was happy to see that this quiz has ended. But the next task was to find a quote from the bible and write it into the field on the screen. I gave up.

But let’s remember what is important here: this is what the Ministry of Education spends its money during the pandemic when pupils and teacher struggle to somehow carry on with remote education despite having no dedicated software or online teaching resources: it spends ¾ of a million of the public money on a crappy “game” designed to pump religious propaganda into children.

And this if of course nowhere near the end. In one of the previous chapters of this series, I mentioned the special deal between TVP, the public broadcaster, and the church. The deal was about religious programming and both parties were very reluctant to make its details public. But finally, portal Gazeta.pl managed to get their hands on that, and what we learned?

TVP is obliged to “inform, objectively and competently about the life of Church and on religious aspects of social and cultural life”. It is obliged to present the Church’s position in the “publicist programs concerning moral and social, as well as professional, social and cultural issues”. Apart from that TVP has to “take special care of the archival footage related to John Paul II”, and that it has no right for content supervision of the religious programmes, for which it pays. Apart from that, there is a very detailed list of the religious programmes TVP is obliged to broadcast, starting from one mass per day in the first program, several other religious events, occasional speeches by the Bishops to a weekly Catholic programme for children. It works up to hours per day, and TVP is also obliged to promote all this content.

And what TVP gets from the church in exchange for all those money and airtime, you might ask? NOTHING. NIL. ZILCH. ABSOLUTE NOTHINGNESS.

Meanwhile, the very government that is pumping all this Catholic propaganda, dancing to the bishops’ tune, staged an unprecedented attack on women’s rights orchestrated by Catholic radicals, cuts funds for in-vitro fertilisation and so on came to wonder: How is that even despite generous handouts to the parents (flagship program 500+ – 500 zł per month for each kid) the demographic situation is dire (especially in the year of COVID, when Poland noticed record number of deaths)? And despite the fact that Polish women abroad have no concerns and give birth to more children than those back home? Mateusz Morawiecki appointed the Special Minister for Demographic Policy appointed back in the 2019 year was not enough – she still works on “developing the strategy” more than a year since her appointment.

And if those bloody women still won’t start popping children out of their vaginas anytime soon, then there is always the strategy proposed by Margaret Atwood in her novel “The Handmaid’s Tale”.