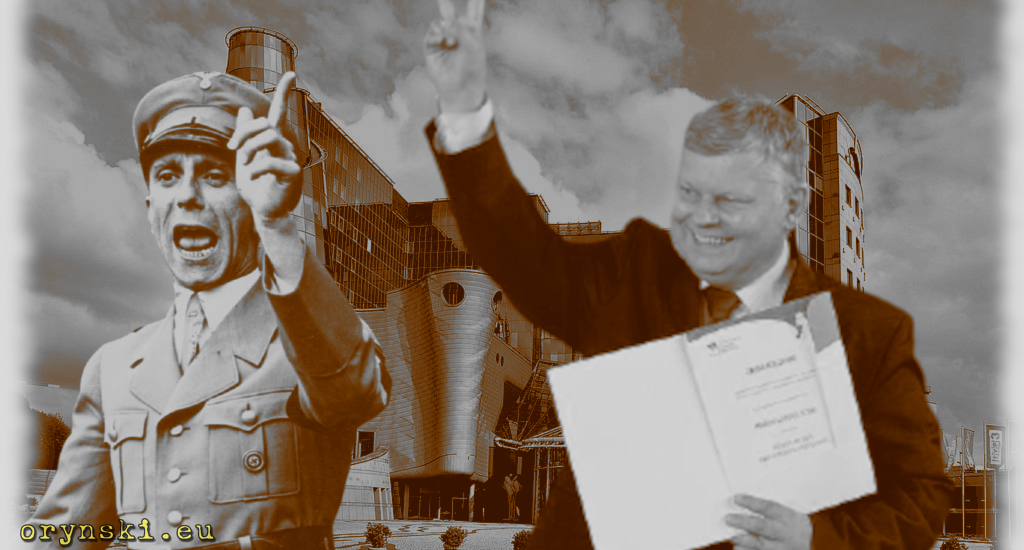 We haven’t had one of those for a while. But they came back with a bang. Literally. A government VIP vehicle, that, according to witnesses, was driving through Warsaw well over the speed limit, had smashed into a small Škoda. Its driver was unconscious and has been taken to the hospital and his car is now, most likely, good for the scrap yard only… Two occupants of the government car – none of them VIP – also ended up in the hospital. I wonder if they’ll try to shift the blame on the Skoda driver, just as they did with the accident of Beata Szydło’s limo (see more here)? I would not be surprised. After one of the TVP employees rode a motorbike into the crowd of protesters in the pedestrian zone outside TVP building (likely trying to scare them, but ended up hitting one of them), it’s his victim who faces charges of “blocking the traffic”. Yes, for being hit by a motorbike in a pedestrian zone.

The new cadres of PiS are exporting those standards worldwide. In the Philippines, our diplomats caused an international scandal after crashing into other vehicle and fleeing the scene. When approached by the police, they bragged about being “above the law” due to their diplomatic immunity, offended the Philipinian nation, threatened with refusing “all visa application” before finally agreed to cover just a fraction of the medical bill for the victim, saying that “Philippinos are poor anyway”.

The Polish police are busy with some Poles again. But with the ones from the opposition: an activist took to the road in his car towing a caravan painted in anti-government slogans. He was stopped for a “routine check” during which at least 10 police officers in several vehicles for over 4 hours were desperately trying to find some technical fault in his vehicle.

Other law enforcers developed a new way to harass restaurants that are open despite (illegal) ban by the government: they come and take away their cash registers claiming, that they need to secure them as they suspect that a crime was committed. And it’s not only the police who tries so hard to bring justice to every pole. The minister of Justice uses new legal tool introduced by PiS to overturn a verdict of the High Court, that ruled that a teacher who was harassed for removing a cross hanged in the teacher’s room by one of her colleagues was a victim of mobbing and religious discrimination.

Meanwhile, a body deemed to be illegal by European Tribunals – Disciplinary Chamber of the Highest Court – looked into the case of a compromised advocate, stripped of his rights to practice as a lawyer for three years, after he pretended to represent a victim of a paedophile priest while actually working against his interest as he was already employed by the Curia. Despite being found guilty by two instances, the Disciplinary Chamber ruled, that all disciplinary procedures have to start over from scratch. Apparently, there were some procedural irregularities.

Procedural irregularities won’t stop Przemysław Czarnek, Minister of Education, who ignored the proper way of doing things altogether and single-handedly amended the list of the scientific periodicals, so that the publications in the ones he and his pals publish in, even the past ones, are now worth more points in the academic system. And so if you publish a paper in one of the publications such as such like “Bulletin of Alumni and Friends of the Faculty of Law of Catholic University in Lublin”, you will receive as many points, as if you published something in the renowned international journal. And so Czarnek’s papers like this one, in which he argues, quoting himself, his colleagues, some classic philosophers and a popular books about how Islam destroys European culture, that “no matter what everyone says, the natural law was always, and will always be, the foundation of Europe, that has been built on a Christian foundation” are now “worth” as much as, for example, a paper of a minor, but important astronomical discovery published in century-old astronomical journal.

I hope it’s only a matter of time when pro-government media will be granted a superior academic status as well. Why wouldn’t they? With publications such as recent column by Tomasz Sakiewicz “Why God likes Kaczyński” that starts with “Of course, as a sinner, I don’t have this knowledge from God (…) but the fact, that Jarosław Kaczyński can act on God’s things in such way, that nobody even knows it’s his doing, surely gives him some extra points in heaven”…? Perhaps even school children will be able to write something worthy of academic recognition – recently the ministry of education published instruction of how to correctly write an essay. The example topic is “Why today’s youth have no chance to be as great as the generation that died in Warsaw uprising”…

But perhaps it’s good that the Ministry of Education finally tries to prepare the students for the job market? Because if PiS has it its way with the media, there will be no place for people who don’t want to write along the government lines. And they go after independent media hard: after the recent purchase of the most of the local titles by state-controlled oil company Orlen (see here), they now came with the idea to introduce a tax on advertisements. If that plan goes ahead, the already struggling media will have to pay a percentage from income (not: profit!) from the advertisement, so the government have even more money to pump into their propaganda machine.

Of course, pro-government media will also have to pay that tax, but it won’t be a danger to them. First, they have adverts galore from the state-controlled companies and institutions, and we all know that they are not paying for ads there because of their promotional value, so they will have no problems to pay more. And advertising is not the only income for the formerly public media – they survive on TV licence payment (harshly enforced under current government) and generous handouts.

This proposition sparkled a protest for an unprecedented scale. All leading independent papers replaced their front pages with the open letter, TV’s and radios stopped broadcasting for the whole 24 hours, internet portals also replaced their content with information about the protest. The aim of the protest was to show the public how the media will look like if only pro-government outlets have remained. Many Poles for the first time in years had a chance to look at what is going on in PiS controlled media. And they didn’t like it, as while the standards are below any critic, the people there still have their cheek to spit Poles in their face. For example recently when TVP lost a court case and was forced to publish apologies on the landing page of their internet portal: they did it but added a line into the code forcing the page to scroll down, so the apologies were not visible unless you manually scrolled it up again. And this is not the only recent case when courts ordered them to apologize to a victim of their false reporting. No wonder that more and more people (including me) boycott Polish Radio and TVP and refuse to give an interview to its employees. As I learned when they wanted to speak to me about the situation of the truck drivers in Kent (see more here), they might be already pretty much used to refusals, as I was approached twice, and after explained I don’t speak with propaganda channels, they haven’t even tried to deny that Polskie Radio is a propaganda channel now. They merely tried to convince me, that THEY are an exception, and THEIR programs are independent of political pressure from their bosses…

But while my opinion on the road haulage situation in England might not be that important, sometimes they really need to have some expert speaking in their shows. And they do everything to achieve this: after a journalist specialising in Latin America refused to speak with them, they have stolen snippets from Youtube channel on which he was a guest earlier and used it in their broadcast… And they even mixed him with the other guy who was on the show…

For many Poles having to watch only pro-government media for a day was like a cold shower. No wonder, that TVP tried everything to diffuse the situation. They stepped up their propaganda, they tried to mock the protest, then bragged about their record viewership on the day when they had virtually no competition (funnily enough, still more Poles chosen to watch blank screens of the independent TV station than a private pro-government station TV Republika run by aforementioned Tomasz Sakiewicz). A special phone line was also open, so people can call to express their support for TVP. Most brown-nosing calls can make it to the air (but, strangely enough, not a single critical one).

Even main opposition party Platforma Obywatelska realized, that this might be the day they should do something, and so they started arguing between themselves if they should support women’s rights or not, and then some of the MP defected to another club. So much for opposition’s unity.

Meanwhile PiS politicians moved to counterattack. Despite the fact, that the information about faulty guns in the army (see more here) published by Onet proved to be true and the guns are now to be recalled by the manufacturer (all 43 000 of them), Marek Suski still compared that article to a Nazi execution of the gun factory in Radom employees in 1942:

His party colleague (and a board member of the Institute of National Rememberance) Krzysztof Wyszkowski compared Onet to “Der Sturmer”.

According to PiS politicians, the media in Poland are foreign owned and either undermine our country or is submissive to foreign interest. In their opinion the press is unable to find the golden centre, that is respectful, friendly criticism of certain activities, accompanied by positive and friendly advice. Why this so called democratic press, that relies on foreign funding, is unable to see how we change this country for the better? Why can’t they see how much help our social programmes bring, how much we reduced unemployment, how hard we work to bring back morality after the mess left to us by the previous government?

And you know what’s the worst thing? They really DO think that, you will have no problems to find quotes confirming word-to-word what I wrote in the previous paragraph. But the scary thing is, that the very quotes I used in the previous paragraph are in fact 87 years old. Those are the words of Joseph Goebbels. So who looks like a Nazi now, mr Suski?

This piece was written for Britské Listy
Pictures used for collage:
Artur Grycuk (Marek Suski and TVP building) and Bundesarchive (Joseph Goebbels).
All on Creative Commons 3.0 license via Wikipedia