It seems that the plan of creating a new PiS’ superhero in the hope to make him a new prime minister has been derailed. After Orlen CEO Daniel Obajtek received an award from pro-government paper and embarrassingly slimy speeches praising his managerial genius (see more in last week’s chapter). True, Daniel Obajtek’s name has become spoken about, but it seems that not in the way PiS would expect. The media and the internet looked closely at his business genius, asking uncomfortable questions like “how it is possible that he saved more money than he earned if we believe his financial declarations” or “how it is that Orlen, under such great management, is not really doing that well as it used to”.

But then unexpectedly Gazeta Wyborcza joined those, who believe that Poles should know more about the kind of man Daniel Obajtek is. They have published recordings made by one of his business associates back when he was still a mayor of a small village of Pcim. Despite the fact, that as mayor he was not allowed to be active in business, he was an unofficial partner in a company that was a direct competitor to a company run by his uncles. According to Wyborcza Obajtek’s first job was at their uncles company, but after he left, they realised that he was made several hundred thousand złoty on the side at their expense. He was about to answer for it in court, but after his pal Zbigniew Ziobro became a state prosecutor, the indictment has been retracted and the case was closed. Still, Obajtek seems to be still holding a grudge against his uncle’s business, so back in 2009 he was trying to bring them down – for example by spying on them and adjusting the prices in his business accordingly.

To top this up, 5 years later he was called to the court as a witness – his uncle’s company were accused of unlawfully obtaining 200 000 zł of EU funds. During this trial, he testified under oath that he was never involved in the competitor’s business. The recordings published by Wyborcza this week prove that it was not true – and the prosecutors are in possession of those recordings for 5 years, yet they declined to act on it. And if that’s not enough, Wyborcza informs that the companies in which Obajtek has shared are flooded with government grants under the PiS government.

Surely, those recordings show much more compromising materials than those that helped PiS win the elections back in 2015. If one remembers the reaction of the PiS to those, surely their reaction to Obajtek’s scandal should be at least as strong as it was back then. But of course, nothing like that happened. Instead, we hear about an unprecedented attack on the greatest manager Poland has, and it’s because the opposition can’t stand the fact, that under his rule Orlen is doing better than ever. And ok, he was swearing, but it’s OK because he has Tourette’s syndrome. Of course, nobody is buying that, as it would be the first time someone has Tourette’s syndrome only when talking in private. The Polish Tourette’s Association strongly protested against trying to explain his behaviour with this syndrome: “One cannot explain every swearword with such tics, the swearwords spoken by people who do not suffer from Tourettes simply mean, that they lack personal culture” – the experts wrote. There go your government grants, Polish Tourette’s Association…

The reactions were strong from both sides of the political divide. PiS, as usual, beginning with a heavy offensive of social media. Dariusz Matecki, PiS trollfarm’s overlord began spreading the message that this is an act of revenge for Obajtek’s decision to use Orlen to bring most of the local media under PiS control (or, as he calls it, “ending German hegemony”). Someone on reddit created a compilation of screenshots from Matecki’s own page, as well as a range of his propaganda and fake news: 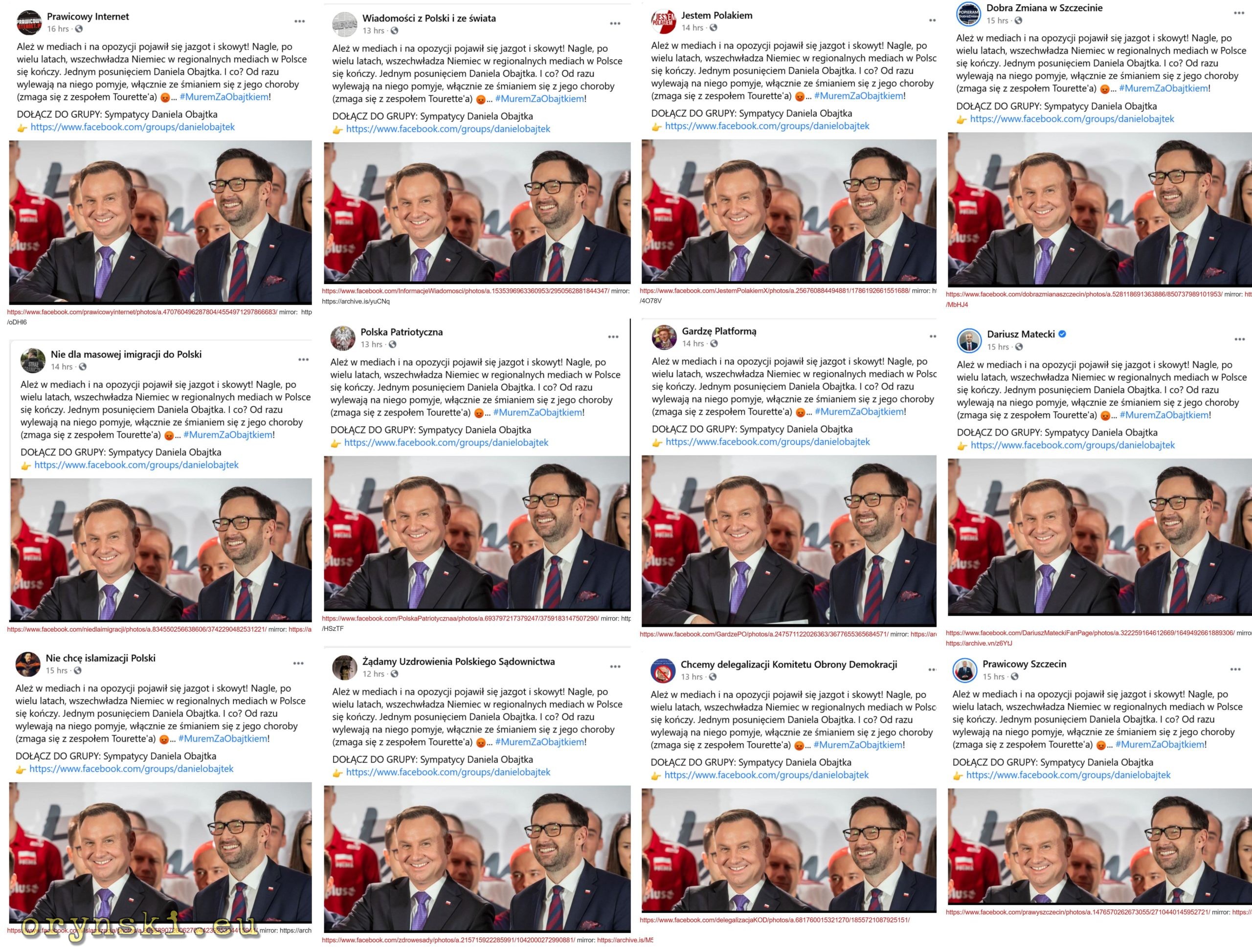 Meanwhile for everyone but PiS the whole thing is just ridiculous. The statesman and genius manager turned out to be just a petty dodger and a boor on the top of that. The opposition MP Adam Szłapka called to boycott Orlen garages, which also gave ammo to PiS propaganda: after a mentally unstable woman rampaged on one of the Orlen’s station, driving her car into the building:

one of the guests in TVP suggested that her actions were directly caused by Szłapka’s call to boycott Orlen:

But, look again at the clip from the rampage at the gas station. You could see the police were present, and they completely lost the plot. A bystander can be heard, telling them what should they do. Despite being armed and having a police car, they were unable to stop the crazy woman, who after causing all this damage simply drove off. The government media informed that “the woman was later detained” – but only because she submitted herself to the police station in the nearby town. Is that the level of service we can expect from the police when experienced officers leave the force, unable to come to terms with it being turned into pro-PiS militia while even generous pay rises fail to attract quality recruits for the same reason? Are they good only for beating the peaceful protesters?

And this is not the only institution that instead of protecting citizens, protect PiS and its allies FROM citizens. Just look at the State Commission for Investigating Paedofilia, created to deal with child abuse in the church. It’s members, some of whom call themselves “ministers”, are indeed paid at the ministerial level and, as it’s typical for PiS, are being chauffeured around (although in that case, they have access “only” to top-spec Toyota Camry cars). By the special ordinance, “commuting to and from work is considered part of members professional duties” – thanks to which its chairman is being picked up every day by his driver from his home 70 km from Warsaw. It means that his car covers at least 280 km per day. His deputy was granted the right to drive herself and she’s allowed to use her car in her spare time as long as she pays for fuel. Since she has another house near Wrocław, she can clock even 2 000 km per month.

She is quite an interesting person, as apart from being a believer in the theory, that some kind of gay conspiracy within a church is responsible for paedophilia, she has no relevant qualification. Luckily, PiS changed the law, so people decorated with high orders can also be members of that commission. So the law was changed, then she was given a medal by President Duda and, voila, she can chase paedophile priests now.

Except that she is apparently too busy driving her Camry around to do anything about that. The recent control by the opposition MP was met with difficulties, but finally, they established, that the commission does almost nothing that would have any significance, like “politely asking church if it would be so kind to release the information on paedophiles it was hiding so far”.

What brought public attention to the activities of the commission was a recent scandal involving (yet another time) father Andrzej Drymer, who was for many years untouchable despite the fact that accusation of sexual abuse date as far back as 1991. It was an open secret, and even deputy PM Jarosław Gowin admitted publicly, that he knew about it years ago and did nothing (apart from mentioning that to Drymer’s superiors). Many were hoping that faced with such a mountain of evidence, the commission would finally start doing something. Conveniently, father Drymer died, so the case was closed. Apparently according to PiS, investigating decades of covering up his activities by everyone from bishops to Jarosław Gowin is not worth investigating. He’s dead, who cares about his victims. Seems this will be another commission – after Antoni Macierewicz team of Smoleńsk investigators, who will be happy with milking public money while providing no results.

So church doesn’t need to be afraid and can enjoy its freebies: A 400 sq metres shop at the Wrocław’s main station has been given to church rent-free (it has to be mentioned – the train station already has a chapel). Apparently, there were no other takers. This is true, at the price asked, but I am pretty sure that someone would be happy to rent it at a reduced price. And why only the church was offered it for free? I was offered it for free, as the church was, I would take it myself! But somehow in Poland, if something is free, the offer is always valid only for the church…

So nothing changes here. But there might be some changes elsewhere: after a petition signed by 14 000 people demanded the main roundabout in Warsaw named after Roman Dmowski – one of the fathers of the Polish independence, but also an anti-Semite – to be renamed as “Women’s Rights Roundabout”, the city commission on the street names refused, arguing, that “street names should have permanent character”. Does it mean that women’s rights aren’t here to stay?

Surely it’s not that PiS bothers about laws anyway. Judge Igor Tuleya was not willing to bend to PiS rules and issued verdicts different that PiS wished, asked prejudicial question in the European Court of Justice or allowed media to access the trial regarding illegal voting in 2016 – when PiS moved the parliament to another room and denied entry to opposition MP’s. They mobbed him, harassed and he was suspended on the disciplinary ground by the illegal Disciplinary Chamber of the Highest court. But the Court of Appeal ruled that it was all illegal, and Tuleya remains an active judge with immunity and should be allowed to sit. But PiS knows better, and so the State Prosecution Office that conducts an investigation against Tuleya regarding some bogus accusations, issued a statement in which they claim, that the court of appeal has no right to decide in that matters and so they won’t respect Tuleya’s immunity. Do you get it? According to PiS, it’s not for the courts to decide on such things, it’s the State Prosecutor (that is: Zbigniew Ziobro) who will decide who is a judge and who is not.

But let’s end with some good news. According to the deputy infrastructure minister, the new Central Airport (also knows as boggy-fields-near-Łódź-where-nothing-is-happening-for-years) is being constructed at a record pace, as the 2027 year just has been announced as the year when the first planes will use it. But I think I can beat it. I just decided that I will build a cosmodrome in my parent’s back garden and the first rockets will get to space from there next Tuesday. And who’s the fastest builder now, government?

This text has been written for Britske Listy.
Picture of Daniel Obajtek: PetroNews (PKN Orlen) via Wikipedia, CC 3.0