We just entered March 2021. If you look even at my blog from year ago, I published several texts related to pandemics last March (see here). We all remember panic buy of pasta and hoarding bog rolls or speculation on the soap and hand sanitizer. Then the lockdown came and I remember how, along with many others, annoyed I was with the fact, that many people don’t take it seriously enough. Meanwhile it’s almost 12 months later and when speaking with my friends recently we realised that we don’t even know if we are still in lockdown or not.

Back in spring 2020 there was no doubt. In the transport company, where I work part time, very little was going on. Some of the staff was sitting at home and I was put on the night trunk duties – three nights a week I was driving to our another depot in Highlands. Usually this route is covered five nights per week by a big lorry, often with a trailer. Meanwhile during the lockdown even those three runs were often too much – my lorry was often loaded only in half and on some nights I was going up in a small 7.5 t vehicle. The roads were empty, the towns and villages deserted, the roadside businesses shut for good. I don’t think I will ever have that feeling of having the whole of the Highlands to myself: on the record night I counted only 7 other vehicles during the drive that took over 4 hours (and then further twenty on my way home from the yard – the route that takes me across whole Glasgow). On the windy remote roads I was accompanied only by the swarms of wild animals, surprised to see that someone is driving that way after all:

On one of the most popular tourist routes in the UK (if not in the whole Europe) – the A82 from Glasgow, along Loch Lomond, through Rannoch Moor and Glencoe to Fort William and further towards Loch Ness, the traffic was so minuscule that in places, where usually one has to travel in the column full of trucks, cars and campers from all over the continent, I was able to park on the side for 30 minutes in order to shoot some footage for a friend, who works on documentary movie on pandemics, and during all this time not a single vehicle passed by… I also once travelled to Outer Hebrides archipelago, and I was one of the four passengers on the ferry (and my truck was one of the three vehicles on the car deck).

It was pretty clear that while some were spreading conspiracy theories or simply calling to boycott the restriction, most of the people understood why do we have to stay at home. On the roadside in the more touristy places one could see homemade signs painted by locals, calling for the tourist to go home and respect travel limitations, and most popular car parks in the scenic places were blocked with concrete block, boulders, tractor tires or IBC tanks full of water. Some locals from Lochalsh even encouraged me to use my truck horns to annoy illegal tourists sleeping in their campers parked on the roadside…

Soon the lock-down became relaxed – both from the top, by the government, which resulted in many companies and businesses coming back to business, and from the bottom – by people, who decided, that since there are no piles of dead bodies lying on the street and no one saw people dying in agony in public, then the rules can be ignored. And so we’ve reached summer, that allowed us to catch some breath. But how much of that relaxation is owed to the stick lockdowns introduced by most European countries, and how much to the fact, that the virus is said to be less danger in summer? I believe that the lockdowns played their part – if you look at the week-to-week infection rates and superimpose that data on the lockdown dates, the correlation is clearly visible: lockdown help to limit spread of the virus.

But today everything looks different. The number of deaths and infections is by magnitude higher than last spring, and yet that spirit of “fighting the pandemic” is gone. Yes, pubs and swimming pools are still closed and there are severe limitations on travel, and the traffic on the roads never came back to the pre-pandemics levels (although this might have something to do with Brexit as well – I commute via motorways and since January I rarely see a truck on foreign plates, which was a pretty common sight until next year). The life seems to be going on as usual, although people don’t go abroad for holidays, drink and meet friends at home or in the park and order restaurant food to take away. But the remote parts of Scotlands are now full of tourists. Last couple of weeks I was travelling across Argyl and Bute, and I saw plenty of tourist vehicles – with bicycles, kayaks and canoes on the roofs and also numerous campers, even despite the fact that it’s still winter and the weather is not the most outdoor-friendly. And this is why I actually had to go to the internet to find, that we still should stay at home, as from simply looking out the window you would never be able to establish that. Everything looks normal – people walk the streets, many shops are open, take aways serve food, there is pretty decent amount of traffic – the towns no longer feel deserted as they were a year ago. Same thing when you speak to people – even those furloughed during previous lockdowns now go to work (or work from home) as their work is suddenly considered to be much more important than last year.

Why is that?
– perhaps we know enough about the virus to know, that it is actually not THAT EASY to catch it – and as we see, that most of our friends who got it report that it felt just like a common cold, we are no longer afraid of it?
– or perhaps the government now only pretending that they treat their own regulations seriously, as they know, that people have enough of staying at home  – and I don’t even talk about people willing to rebel against the government, I mean that by now governments are aware about the psychical impact of the lockdown on people and have to weigh the benefits from strictly enforcing the lockdown against the risk caused by mental issues, especially that with the vaccination program well in the way, the end of that ordeal seems near.

So if neither my friends of I were able to say if we are still in lockdown or not, does it means that nobody observes it any more? Or that the rules of the lockdown became normal to us and we no longer see them as something extreme? Or perhaps it’s both?

I think it’s both. Wile year ago everyone was taking lockdown seriously, with fear obserwing raising bars depicting the number of infection, by now it all feels normal to us. And even the fact, that hundreds of people die everyday seems to be something that we could get used to. Unfortunately the latter for many people leads to the former, and while most of us adhered our lifestyle to the new reality, the observance is no longer that strict. And the results can be seen in the official statistics: while the first lockdown last spring allowed us to bring the level of infections nearly to zero, the recent one, introduced late autumn had very limited impact – and after Christmas the infection skyrocketed and, I guess, it’s only going down now due to record pace at which the vaccines are distributed in Britain: 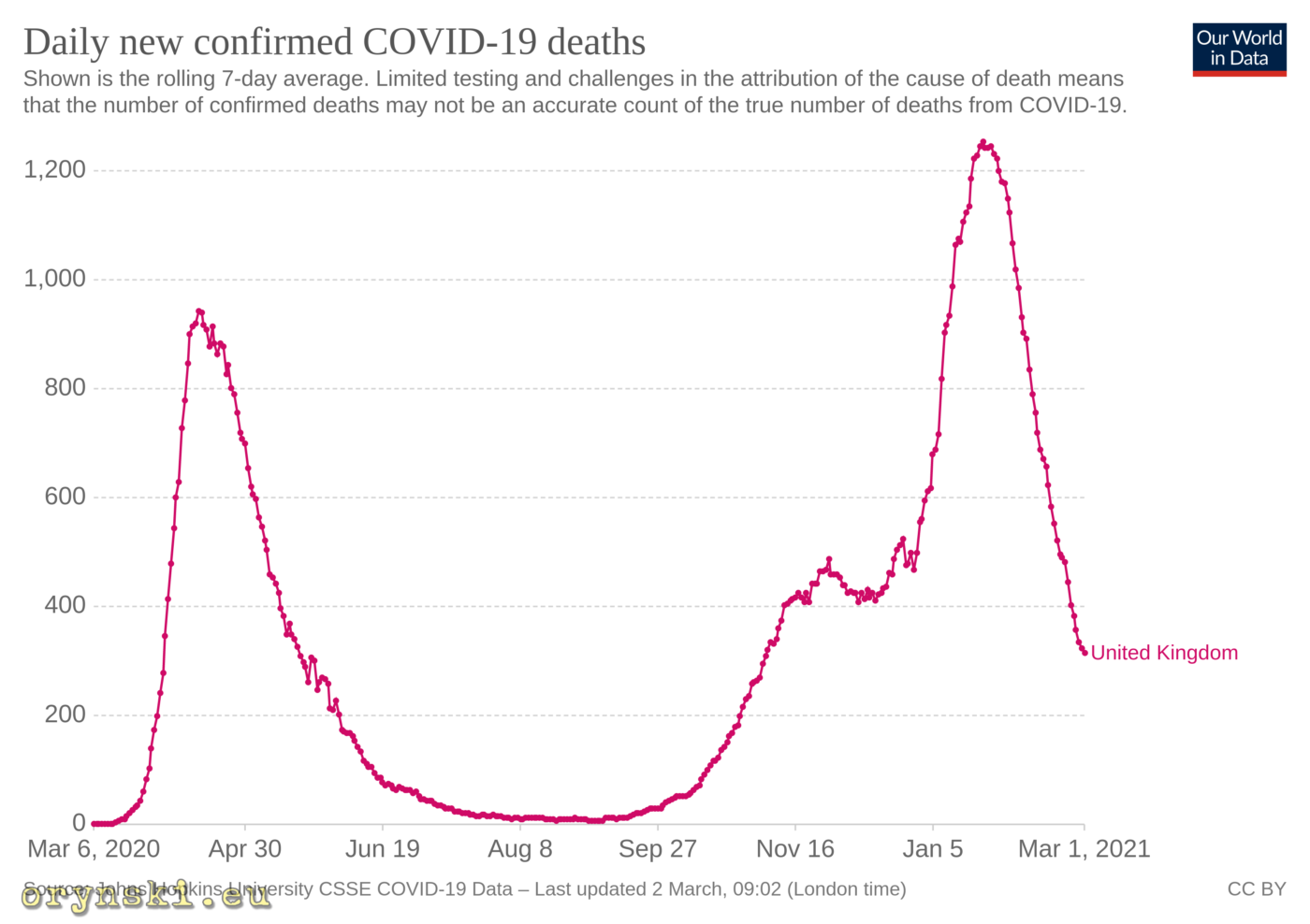 I am afraid though, that even despite those scary news about the new, more infectious strains of Covid, those deserted roads and cities are thing of the past. So we should feel lucky for that the scientist were able to deliver in record breaking time that new mRNA vaccine that has very high efficacy rates…

But if there was something good that happened to me during that pandemics, it was that time, when I had a feeling that I am the only man in the Highlands. I doubt anything like that will happen ever again… 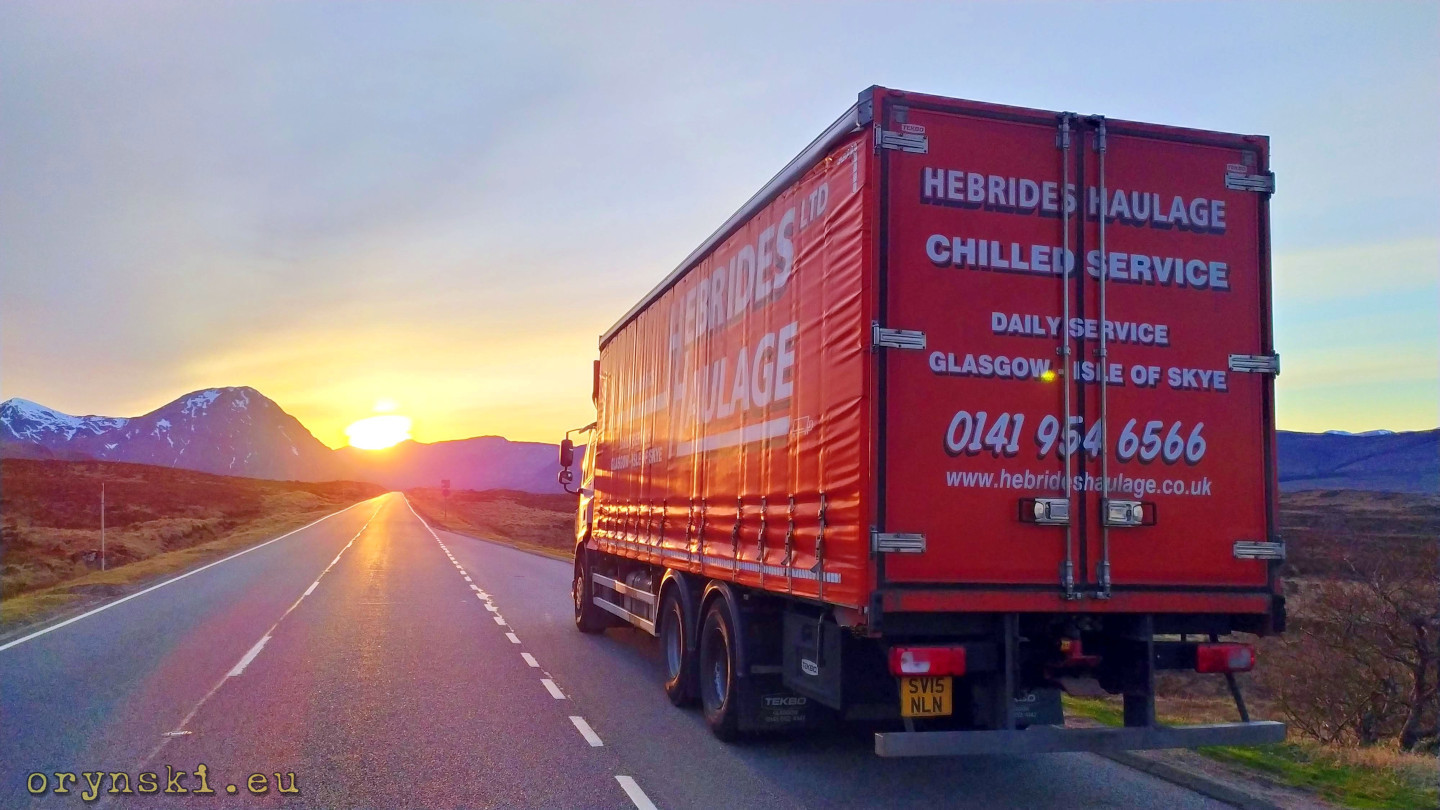 Data source: Our World in Data

I was outside today. Britain is simply asking for it.

This article may save your life.
No comments yet
COVID-19 Great Britain Scotland society