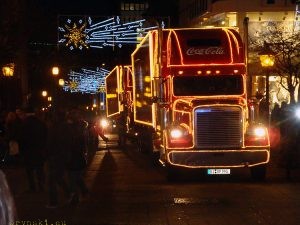 In the last days of November, I switch my British radio off for good after hearing the voice of George Michael for the first time. The fact that a heartbreak song became a Christmas anthem says a lot about how shallow Christmas became in Anglo-American culture. In Britain you want it all, and you want it now. But if you start singing Christmas Carols as early as November, what is there left to make Christmas feel special?

In Poland, despite a massive offensive of the marketing tailored to Anglo-American culture, we still manage to hold on to Christmas in which everything had it’s place and meaning. First there are four weeks of anticipation. As advent was a time of reverie, while British people run from one Christmas party to another, Polish children celebrate opening a new window in their advent calendar every day. Religious people are getting up early in the morning to go attend Rorate Coeali Mass, celebrated at sunrise. Traditionally, dressing of Christmas Tress in Poland takes place in the morning on 24th of December in the middle of preparation frenzy, as all has to be ready for the evening.

First star emerging on the sky at Christmas Eve’s night gives signal that it is time for everyone to gather at the table. There are many traditions, depending of where you are from, but the most common one is that there has to be 12 courses – one for each month of the year. As in Catholic tradition Christmas Eve used to be a day of fast, there is no meat included in traditional meals, so people eat fish, pierogi with cabbage and wild mushrooms, borscht with beans or tiny mushroom dumplings, hunter’s stew and similar things. One has to at least try each course, as failing to do so can bring bad luck in the corresponding month. But don’t worry, your traditional compote of dried fruit and prunes will help your stomach to digest it all.

Christmas Eve is also a day we got presents. While many Poles give up to the pressure of commercials tailored mostly for Anglo-American culture and accepted that they were delivered by fat bearded man in red costume who seemed to arrive on the illuminated Kenworth truck loaded with known non-alcoholic beverage, in most Polish homes gifts are still given (depending of the region) by Baby Jesus, Star-Man, Grandpa Frost or Little Angel. After presents there is time for some dessert before going outside. Most Christians will go to the church for the midnight mass, many others will just take a stroll admiring (for the first time – remember, they were just set up!) Christmas decorations in the homes of their neighbours.

On actual Christmas Day there is a great dinner to celebrate. This time, there will be meat, plenty of it. Also – cakes and sweets. For Britons, family Christmas are over by this time. In many places you can already find Christmas trees dumped in the skip on next morning and people run to the shops to buy that bargain goods, as if they did not had enough of shopping for presents over last few weeks. In Poland, the Christmas period had only just started. Most shops are still closed on second day of Christmas – as Boxing day is known in Poland – but as it is usually day to meet more distant family and friends, the roads are full of cars full of people visiting each other. Christmas trees will be with us for weeks, ensuring that New Years Eve will be also celebrated in those beautiful celebrations. It was a time of Kolęda – where so called Kolędnicy, a procession of singers and buskers in traditional costumes, were visiting houses singing carols and bringing good wishes to residents. They were invited for a meal or rewarded with treats. In some ways it is like Halloween, but it lasts for many days and is more about joy and fun, less about harvesting sweets. This tradition is still pretty alive in many villages in Poland and it’s revival can observed in bigger cities as well. Catholic priests also go for Kolęda to bless homes of their parishioners. And then there are Orthodox Christians, who celebrate their Christmas couple of weeks later!

But it’s not only them who gather around Christmas trees in January. In Polish tradition we celebrate some important events in Jesus’s eraly life: from a visit of Three Wise men (on 6th of January) to his presentation at the Temple (2nd of February). While in Britain keeping the Christmas tree up past Epiphany day is considered a bad luck, in Poland you should not take your tree down earlier than that and you can keep it up to the latter date if you wish.

In Britain Christmas start in November when streets are decorated with Christmas trees, radio waves filled with some cheesy festive tunes and Santa’s in red clothes becomes omnipresent, mostly trying to sell us some crap. By late December most people are fed up with all this, but luckily after having a turkey with the family, they can dump all the decorations to the bin and go after their own business as usual, having to face dark, gloomy days of winter.

In Poland Christmas coming only after a period of advent, so the darkest days of December are filled with excitement and anticipation (and some perks as well, as Santa – who’s real name is St Nicolaus – comes to Poles on his name-day, which is 6th of December, so we get presents twice!). The main celebration starts only a night before but then positive Christmas atmosphere carry us over to the next year. By the time last Christmas trees are going down, days are already longer and the spring is in the air, so nobody in Poland heard about Blue Monday.

Losing a friend helped me find my roots in Scotland