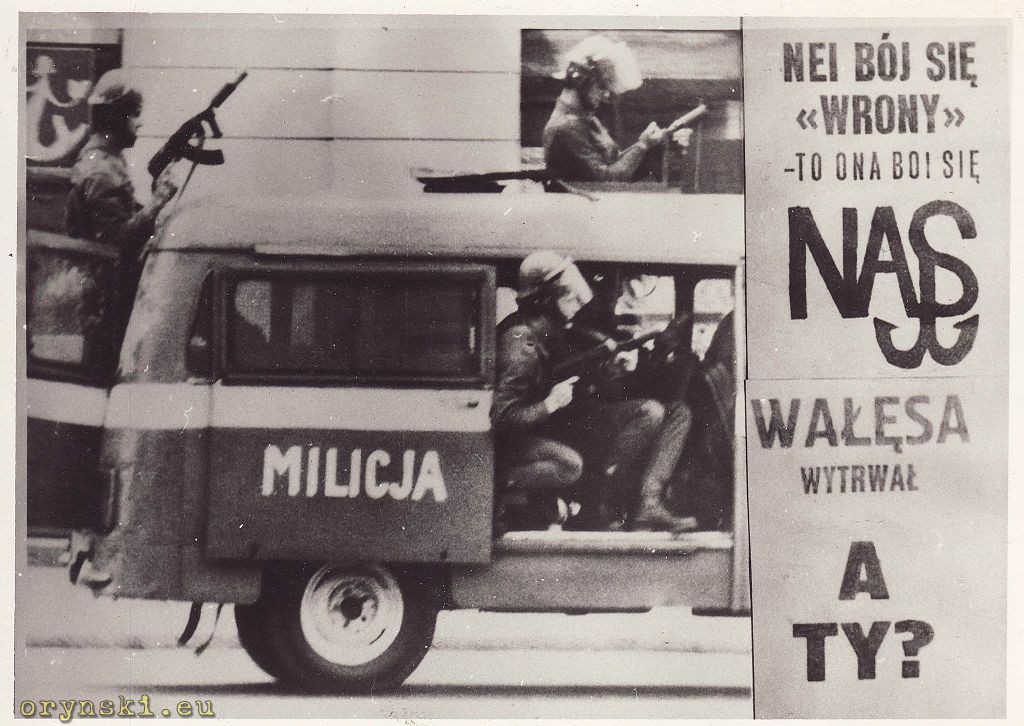 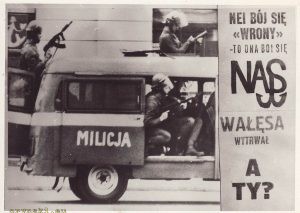 Last days have passed in Poland under the sign of anniversaries. Or month-iversaries, as in case of the 80th month-iversary of the Smoleńsk crash.

The most important anniversary is 13th of December. 35 years ago General Jaruzelski introduced Martial Law in Poland. In early morning hours many opposition activists got detained or had to go into hiding. This day still angers Jarosław Kaczyński, mostly because despite the fact, that (as he claims) he predicted this to happen, on the day of it’s introduction he was considered important enough to be worth a hassle and slept in his cosy bed till noon.

As he claims he later was detained, but released almost immediately. Famous opposition leader Władysław Frasyniuk once told, that there were only two options for that to happen: either he agreed to cooperate, or he was such a booby that they did not considered him worthy of their time. Since he did not played any significant role in the opposition movement, it is probably the latter, although some still believe that soft approach of Communism regime to Kaczyński can be explained by their fathers relations with the party.

There are many clues supporting a theory that Rajmund Kaczyński worked for the communists. First, as a officer of Home Army (Armia Krajowa) married to another participant of Warsaw Uprising, he had it just to easy. While their brothers in arms were being persecuted, mobbed and often given lenghtly jail sentence, he had a good job, huge (for the condition of post-war Warsaw) flat in good neighbourhood, trust of the regime allowing him to travel abroad and, last but not least, his two sons became child movie stars – believers in that theory point out that while Kaczyński’s mother is being idolized (she had even a street named after her), their father is rarely mentioned.

There is no surprise then, that Kaczyński needs to re-write history from the scratch. By smearing legends of solidarity such as Frasyniuk, Wałęsa, Michnik, Kuroń or Pinor, he can free a space to fill by himself and his brother. He can count on his allies, as some people are even more ashamed about what they did during the communist times. PiS MP and in 1980’s a prosecutor Stanisław Piotrowicz is one of such people. Accused in Sejm of persecuting opposition activists, he brazenly denies, claiming that he was in fact helping them and never accused any of them. When proved lying by being shown his own signature, he was ardently defended by his PiS collegue, who said that the accused Antoni Pikul told him that Piotrowicz was doing everything to get him out of jail. Journalists from TVN went to check that and Antoni Pikul, despite being today a deputy-mayor in the town run by PiS firmly denied all those lies, but also demanded that his name was not used in any context to whitewash Piotrowicz.

The case is developing as despite Piotrowicz claims the archival documents shows that he was a valued member of the prosecution team and more and more people step forward to accuse Piotrowicz of being active in fighting anti-communist opposition as far as to 1988. To be fair, some people also come forward to tell that Piotrowicz was indeed helping them, and he is very keen to confirm that, saying that this case cost him his job in 1982. The only thing is that the lady in question was not in the scope of the regime until 1985.

With such obstructions, there is no other option as to build the new Polish history of the other myths. One of the main points of PiS narration is claiming that Poland is totally ruined by the previous government. This is why they aim to drastically overhaul the whole of the Polish education system, despite the facts, that since last reform nearly two decades ago, Polish school system made a huge progress and it is internationally recognized as a success story. But for PiS, it is not patriotic enough. President Andrzej Duda said, that Polish school has to teach a “true Polish history, in which it is known who was a traitor, and who was a hero”. The month-inversaries of Smoleńsk crash are there for this very reason: they aim to build cult of president Lech Kaczyński, who, according to believers of the conspiracy theories, was murdered by Russians as he was statesmen of such posture, that even Putin was afraid of him. Antoni Macierewicz works very hard to blur well known facts about the causes of the crash and the “pursuit for truth” seems to be never ending, allowing PiS to confuse more and more Poles. Recently they have started exhuming every single victim of the crash (apart from those who were cremated). That decision was so controversial that even some PiS followers openly criticized it and last month-inversary was disrupted in the protest.

But such pathetic actions won’t be possible in the future. PiS just pushed the bill drastically limiting the right to protest, giving priority to events that take place on regular basis (it’s obvious that they want to protect their month-iversaries) and pushing contra-manifestations away from the sight of the protested. But they are not that bad: they have decided not to include most controversial entry giving priority to “protests” organized by the church or the government. In the opinion of the High Court (not tribunal – tribunal is de facto paralysed) this bill “has all characteristics of the state of emergency”. But there is no need to worry, Kaczyński is clear that he is NOT preparing another Martial Law, just tries to organize somehow chaotic actions of the opposition.

Environmental Minister Jan Szyszko, nicknamed Szyszkodnik (~ Verminister) for his devotion to destroy Polish nature (you can read more about Jan Szyszko’s hatred for trees and fondness of hunting in 4th chapter of this series), is also keen to somehow organize action of the oppositions in his own back yard. He is just working on the bill that will de facto exclude ecological organisations from any influence on new investments or participation in the protection of natural environment. According to proposed law the only organizations allowed to take part will have to be associations existing for at least a year, funded solely by membership fees (so no EU-grants or support of the local governments or bigger organizations such as Greenpeace) and they have to include at least five members graduated in chemistry, technology, nature science, agriculture or forestry). At the present the number of organisations in Poland that would meet all of those conditions is 0 (zero). Protesting against destroying environment by people who are not members of such organizations will be punishable by imprisonment for up to three years (!!!)

Police officers are already being trained how to pollute environment fom day one of their job. As 11 November was yet another anniversary – this time of Poland regaining it’s independence after first world war, Deputy Minister of Internal Affairs visited a small town of Augustów. This event was celebrated with pump. Female students of local third aga university performed Hawaiian Dance for the esteemed guests. During a military parade outside, a confetti in national colours was dropped from a helicopter. It was busily produced by police officers on a previous day, when they were issued with scissors and stack of white and red cartons and ordered to cut them into pieces. Despite claims that cops were taken off the streets to fulfil this task, the police spokesperson says that confetti was produced solely by the new officers who just started their job and were not fit for any other duty. Well, if the guys who just graduated from Police Academy are good only to work in the field typically dominated by pre-schoolers then perhaps Polish school system is in urgent need of radical overhaul indeed?

P.S. But there are good things happening in Poland as well. As usual, on 6th of December, Santa has visited kids. Strangely though, this time he was wearing an arm band with a fascist symbol of nationalist organisation…

One Reply to “Meanwhile in Cuckooland 12 – Anniversaries and Month-inversaries.”