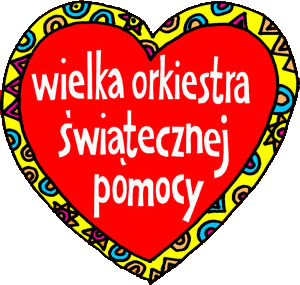 Jerzy Owsiak was always a colorful person. A quicksilver character who could never find a place for himself. He attempted to study various subjects from philosophy to the arts, evaded military service by faking mental illness and in the process became so interested in mental health that he become certified psychotherapists. He is also certified stained glass maker, leader of a group of happeners called “The Society of Friends to Chinese Towels (Towarzystwo przyjaciół Chińskich Ręczników)” and, despite his dysphasia, a broadcaster. When twenty years ago as host of an eccentric TV program for young people, he answered an appeal by a specialist heart clinic for children, he never could have known that he was to begin an organisation that would not only changed his fate forever, but also that of the country.

The Great Orchestra of Christmas Charity (Wielka Orkiestra Świątecznej Pomocy, also known simply as WOŚP) has raised approximately 100 billion pounds for charity over the past twenty years and every year runs one of the biggest charity events in Europe, the so-called Grand Finale (Wielki Finał). Twenty years ago it started with some fundraising rock concerts, but their overwhelming success lead them to decide that it had to become a regular occurrence and the official foundation was registered. Now, on the second Sunday of every January, events are held throughout Poland and beyond – wherever a significant Polish community can be found. Charity auctions of donated items, concerts of every conceivable kind of music, art exhibitions, sporting events, poetry readings, open days in military units and other places usually not accessible to the public and races by amateur drivers. Thousands of volunteers mill around the streets of towns and villages, displaying colorful ID badges and offering stickers with red hearts bearing the WOŚP logo, in exchange for the donations.

On the day of the Grand Finale, at least in the larger cities, a majority of passing people proudly display WOŚP hearts somewhere on their clothing. WOŚP is known to 97% of people in Poland; more than 1 in 10 Poles have at least once registered to volunteer for the Grand Finale and more than 1 in 8 have been treated with medical equipment supplied to hospitals by the foundation. Today WOŚP is not only about child cardiology and each year the target of the fundraising is different. In the past, the event has been used to raise money to help children hurt in traffic accidents, with kidney failure and to introduce new methods of medical diagnostics in the assessment of infants. It’s thanks to WOŚP that virtually every single baby born in Poland has its hearing instantly diagnosed with advanced medical equipment – more than any other country in the world.

The Grand Finale is famous for its joyful atmosphere. Both local and national TV and radio station broadcast from its events, while its founder Jurek Owsiak serves as conductor from in a Warsaw TV studio that for last 13 years has been decorated by well known artist and album cover designer, Jarek Koziara.

Throughout the years it has customary that quirky items are auctioned and unusual events occur – perhaps a legacy of surrealistic movements such as the Orange Alternative, popular in 1980’s Poland. Everything can be auctioned: for example every last penny of foreign currency that ends up in donation tins finds a home. That with value is exchanged, antique or rare coins are openly auctioned and worthless money no longer in circulation ends up in the ‘goodie bags’ which could contain Zimbabwean Dollars or Mozambique Escudos. But if you fancy something bigger – it’s not a problem. A decommissioned fighter plane perhaps? Or maybe you’d prefer to stay on the ground and go for a tram instead? The WOŚP’s partner website, Allegro, the Polish version of Ebay, never fails to surprise.

Government and local council institutions actively take part in the action: military kitchens provide catering, Police brass bands play for the participants, museums and castles host WOŚP events or donate money raised from tickets on that day. The military also offers some experiences that are not available on any other day of the year: if you dreamed of flying in an F-16 fighter jet or cruising on a submarine, on this particular day of the year, you can do just that whilst helping sick kids. Local councils auction the rights to name roundabouts or bridges and celebrities offer their services: you might bid to have dinner with a famous actress, or to have your dishes washed by a well known politician.

The almost carnival atmosphere of the day means that even usual rules can be bent. A number of years ago I was volunteering at a racing event at the go-kart track in Wrocław when two Police Officers approached, checked my ID and asked me to follow. Initially scared, I was soon relieved to see that they had decided to kill two birds in one stone and use WOŚP volunteers to speed up the process of clearing the nearby street from unlawfully parked cars. Every driver was given the offer of being issued a ticket (which entails a certain amount of paperwork) or to donate a sum to the WOŚP tin and drive away. Not a single driver refused so in about 20 minutes the street was empty and the tin was full of banknotes – and I was delivered to the bank in a Police car with blue lights on display.

In my later years I was active in my local WOŚP HQ and on one occasion my old battered FSO 125p car become an official WOŚP vehicle, thanks to which I had the unique experience chauffeuring celebrities in a car worth less that they probably spent on dinner that evening, as traffic policeman stopped the traffic at the junction to let me through, or gave me free parking in the city centre or free fuel. There aren’t any rules, people just want to help. When I stopped at the filling station, the pump attendant offered me a 10 liters of LPG gas for free. When I asked if I need to sign something, he said “No problem, I will deal with my boss, he should be OK if I tell him it went for WOŚP and if not, I will just square him up”. His boss, who just happen to be approaching him from the back said “Stop talking rubbish, just fill the tank up for WOŚP, he is in hurry”…

On WOŚP day even the most unexpected parts of the society cannot escape the experience. A friends told me a story about two teenage girls, one of them black, who were approached by yobs who subsequently tried to rob them of their tins. To their great surprise a couple of Neo-Nazi Skinheads came to rescue. Having suitably intimidated the greedy youngsters, they checked the girl’s WOŚP ID and told her “This badge makes you untouchable today” and walked away.

But WOŚP is not only one event. Donations are made all year round and have funded series of programs training volunteers in the Peace Patrol, that is nowadays as significant as the similar program of First Aid training run for generations by Polish Red Cross. But WOŚP does not provide medical training only. The volunteers receive training in other fields, such as leadership, survival, group management and event planning. The training is funded in a large part by the foundation, under one condition: the graduates must then help in one of WOŚP events, either the Grand Final or Przystanek Woodstock that takes place in the summer.

Przystanek Woodstock, inspired by the original Woodstock festival is biggest free open air music event in Europe, that is organized by WOŚP as a thank you to its volunteers. In 2011, this polish Woodstock had more than 700 000 people in attendance, and apart from the music performances on the main stage (that over the years has featured such international stars as Acid Drinkers, Die Toten Hosen, The Guano Apes, Killing Joke, Nigel Kennedy, The Prodigy or Twinkle Brothers) and small stage (that hosts mostly concerts of young bands and folk musicians) it offers young people the opportunity to listen to the lecturers and panel discussions by leading academics, artists, journalists entrepreneurs or politicians such as the journalist Tomasz Lis, a member of the Dalai Lama’s, Kesang Takla, opera singer Wiesław Ochman, former president and solidarity leader Lech Wałęsa, Poland’s first non-communist prime minister Tadeusz Mazowiecki and film director Andrzej Wajda to name a few. In 2012, the event took place near Kostrzyn nad Odrą, near the German border, and was attended by the president of Poland Bronisław Komorowski and German President Joahim Gauck, who lead an open discussion with young people. It’s worth to mention that thanks to the army of WOŚP-trained Peace Patrol members, the event has the best safety record in Europe.

But it’s this Przystanek Woodstock that raises controversies. Critics of WOŚP use it as example to suggest that money raised by the campaign is not put towards its stated purpose, and is instead spent on concerts. However, so huge are the sums raised by WOŚP, the Woodstock event is run solely on the interest generated by funds raised at the Grand Finale. In spite of publishing detailed financial reports every year, WOŚP is continually accused of mal practice by the Polish right wing. Perhaps this is because it does not only compete for people’s donations with well established Church charities like Caritas, but it has also created a completely new standard of accountability, an uncomfortable meter stick for the Catholic Church has become accustomed to receiving unquestioning donations.

But in my opinion, not only has WOŚP saved lives and dramatically improved the standards of medical care in Poland, it has also rebuilt a civil society. After the collapse of communism in 1989, Poles were focused mostly on trying to find their way under the new conditions. WOŚP showed people that they can make a change and see the results of their work: medical equipment bought by the foundation has always been marked with the red heart logo. And unlike the authorities and many adults, WOŚP’s founder Owsiak spoke to young people as equals. They were taken seriously and given opportunity to work. People who want to become involved on a regular basis become trainers for the Peace Patrol, people who are willing to offer only one day take to the streets with their WOŚP tin to raise money. Today, after 20 years, Poland has a whole generation of adults, for whom volunteering and charity work is the norm.

WOŚP is also a great leveler. This year saw politicians from opposite ends of the political spectrum work together, in the streets colorful Punks could be seen fundraising alongside those in scouts uniform. Eighty-nine percent of Poles are proud of WOŚP and they certainly have something to be proud of. The Great Orchestra of Christmas Charity not only saved numerous lives, but also changed the face of society.

Polish media under fire. A great transformation, or a standard changing of the guard?

Do it yourself
church gazetae.com media Poland society