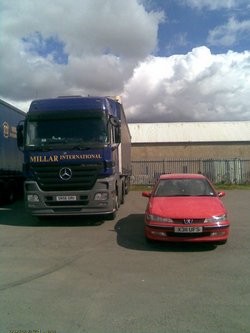 One youtube movie keeps returning to internet forums with the regularity of the comet. It’s an amateur movie shot few years ago on the British motorway M1. On this movie we can see a big DAF XF truck pushing a small car in front of it. Usually there are plenty of angry comments under that movie that blame driver and keyboard warriors don’t hesistate to call him names and suggest that he must be either utterly daft or evil to do such thing. But does he?

If you haven’t had a chance yet to see this movie – here it is.

Not many people know how it ended. The driver realised soon that something is wrong and pulled over where to his horror he found what was causing those strange noises and weird driving of his vehicle. He helped shocked women-driver out of her vehicle and he comforted her until the arrival of emergency services and police. The investigation carried out at the highest level not only cleared truck driver of any blame, but also apraised him for a professional behaviour and for the assistance he provided to those unfortunate driver. But none of those keyboard warriors knows that.

But there comes the question: if it was not a fault of the truck driver, who is to blame? Let’s see another recording, showing how it could happened:

About 30 s into the movie we can see a car, that tries to get into the gap between the truck and vehicles ahead. Propably the car driver assumes that the truck driver will see him and slow down to let him in. And this is where he makes a mistake. Truck drivers or cyclists usually have no idea how limited is visibility from behind the wheel of the big lorry. It’s driver, sitting high and deep inside the cab has to deal with a significant blind spot. Let’s have a look at this picture, made from the point of view of the driver of big Mercedes truck: 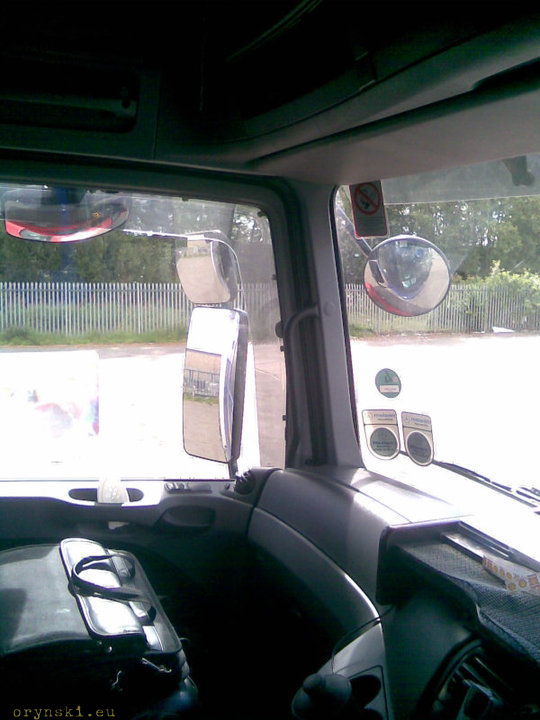 Can you see the car that is parked next to it? You can’t? Have another look. In two of many mirrors you can see something red at the edges. This is a big family sedan. The following pictures show the same situation as seen from the outside: 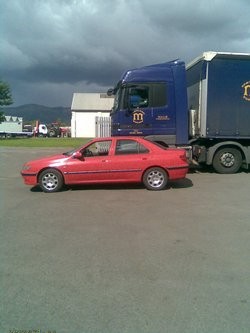 As you can see, despite the fact that lorry is fitted with several mirrors – classic, wide angle, top (so called: kerb) mirror and a “fish-eye” one mounted at the long arm protruding forward: 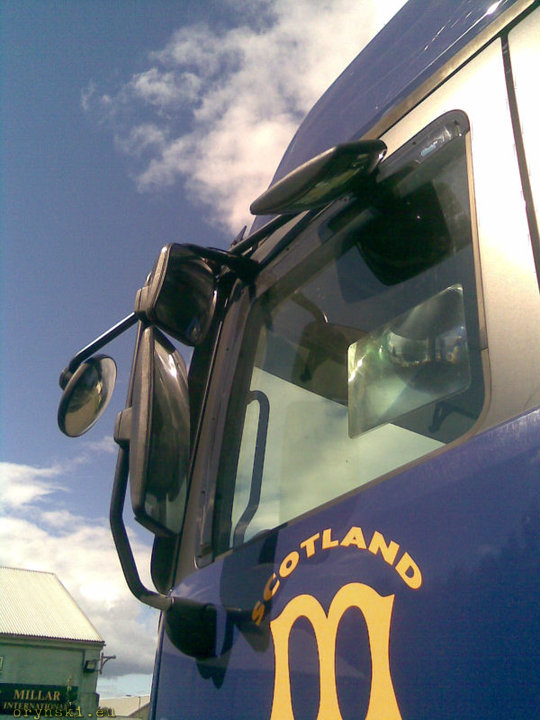 even a big family sedan can be easily missed. Small car like Smart FourTwo or Peugeot 107 can be completely hidden in the black spot – the same goes for a bicycle or motorbike. In Great Britain, where significan percentage of the trucks is driven by the driver who sits at the opposite side of the cab, the danger is even bigger, as blind spot can occur on both side of the truck. The best way to learn on which side of the truck the driver is located is to watch for the kerb mirror, which is usually located over passenger doors. It’s worth to keep it in mind next time when we will be driving along one of the “big ones” – the awareness of this fact and avoiding staying for prolonged periods of time in the places, in which on our pictures the red sedan is, can save our life.

And last but not least, it’s worth to remember that to drive a truck is completely different experience than to drive a car. Lorry drivers have to be trained to a higher standards for a reason. They are therefore, unlike many amateur drivers, aware about the limits of the vehicle they drive on daily basis. But of course they are not Supermen with X-ray vision and sometimes they just can simply miss that colour glitch in one of their mirrors. This is why it is worth to take care of one’s own safety. And next time when you want to post a comment about “some stupid trucker” on the internet maybe it would be worth to think twice: do I really know what I am talking about?

If I am British, good soldier Švejk has to be as well.

A crisis-proof industry.
Great Britain on the road