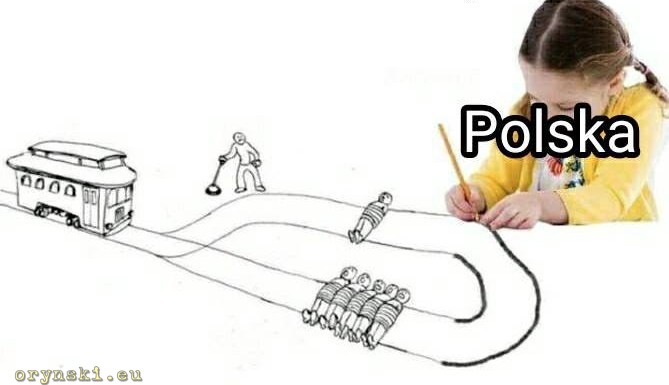 Some say, that the rule of PiS is good only for members of PiS, who can get good jobs or obtain some lucrative contract. The case of Adam Hofman proves that it’s not true. After being kicked out from PiS for committing fraud on travel cost reimbursement, he’s doing pretty well. Without having any experience in the field, he runs a PR company that makes a fortune on under-the-table lobbying and running troll farms spreading disinformation in order to swing public opinion towards the options suitable for big companies like Coca-Cola, who feared the new sugar tax proposed by PiS… Actually, I do apologize. I can see now how, being from PiS, he might actually do have relevant experience of making shady deals with his cronies and running troll farms.

Anyway, a group of investigative reporters looked into his company and found, that while he works for private customers as well, state-controlled firms pay a lot of money for his services. Hofman is outraged that someone dares to “torment his employees” by politely asking questions and in turn ask who pays for such journalism?

The question of who pays for writing in Poland can be more complicated than you think nowadays. After the government pushing another group of citizens into a trap – this time tourism industry to whom they promised that they will be open, then announced total lockdown after Christmas (which is not to be called lockdown, because PiS promised there will be no lockdowns, and they would have to introduce state of emergency to do that, so they call it “The National Quarantine”), hotels and other businesses from the hospitality industry are desperate to stay in business. So, for example, as the only business stays in hotels will be permitted, hotels now offer work. You can, for example, get employed as a poet, and so qualify for a hotel stay. Some clubs, after being banned from hosting New Years’ parties offer “all-night-long dance courses”. The government’s ban on traveling on New Year’s Night, when everyone is supposed to stay at home from 19:00 to 6:00 can also be problematic, as many people are not 20 anymore and might not be able to stay up till morning. Luckily that problem is also solved by the ingenuity of the Polish entrepreneurs. In Lublin, a vehicle recovery company comes to the rescue: you cannot travel in a private vehicle, but recovery vehicles are exempt, so they are going to transport you, together with your car, around town as needed.

You might get angry at people for ignoring the risks associated with the pandemics, but it’s hard to blame them for not willing to observe government regulations, especially since they still failed to introduce the State of Emergency, they are legally not binding. Moreover, the government itself seems to act chaotically at best, or deliberately ignoring the advice of experts at worst. A recent situation, when a new, more dangerous strain of COVID-19 has been discovered in the UK shows it very well: while most of the European countries, along with several from all across the globe immediately cut all travel from the UK to prevent that new virus spreading into their countries, Poland not only postponed that decision by 24 hours, but even sends bigger, or even extra planes to bring more Polish residents of England home. On a normal day, about 50 scheduled flights bring passengers from the British isles to Poland, that is about 9000 people. Will they be quarantined? No. Will they be tested? If they want, and if they are desperate enough to spend hours on the phone, trying to reach the busiest number in the country: the central number of the Sanitary Inspectorate (because during 9 months of pandemic nobody thought about employing more call center workers to deal with the unprecedented amount of phones) then they will be associated a location to which they will have to travel to in order to get tested.

Such illogical decisions can be seen at every step, for example, homeschooled kids are released from their online classes earlier, so they can go to the church to take part in the recolligierre classes. Could anyone blame Poles for not willing to follow the government’s guidelines anymore? The government’s approach to pandemics has been aptly illustrated by the author of this meme: 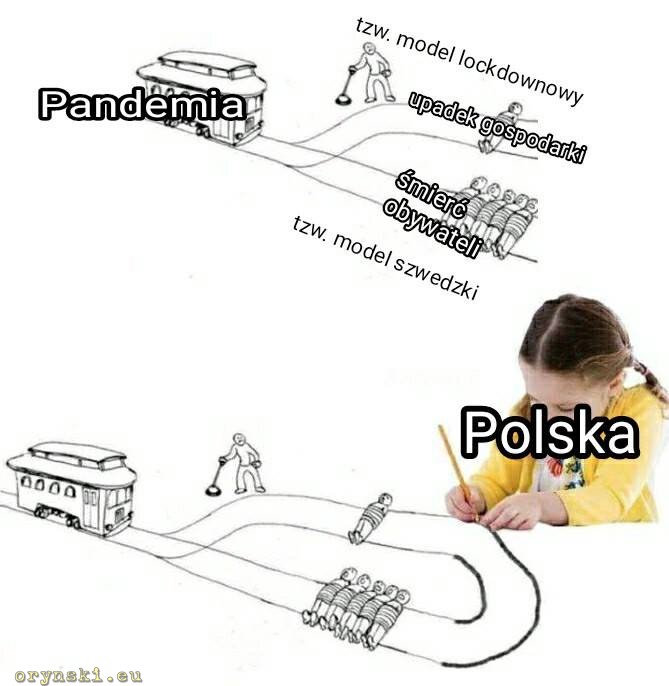 Anyway, the government institutions seem to be losing the plot as well. After an opposition MP has been unlawfully arrested by the police during one of the women’s protest (they handcuffed him, transported him to the police station and then, when they realized he has immunity, throw him on the street telling him “to get to fuck”), the police and prosecutors contradict each other. According to the police he has never been detained – they just checked his documents and let him go after finding who he is. According to the prosecutors though, he was lawfully detained, as he was caught redhanded committing a crime.

Another MP accused of criminal activity is a left-wing MP Joanna Scheuring-Wielgus, who is being accused of “maliciously interrupting” a religious service and “offending religious feeling”. As the country prosecutor explained, “Joanna Scheuring-Wielgus and her husband organized a kind of happening in the church, promoting views contradictory to the teaching of the Catholic church (…) and insulting the place of worship”. Zbigniew Ziobro wants to strip her of her immunity. And what was that crime? They stood up, held the posters saying “Woman, you can decide for yourself” and “It’s for the woman to decide if she wants to give birth, not for the state based on Catholic ideology” for about 60 seconds, then left. A terrible, terrible crime.

Another opposition politician harassed by the state is Rafał Trzaskowski, who has been called to the police station. It turns out that it’s about that he was not observing the rules during the presidential campaign, he was not wearing the mask and the social distance was not observed. Interestingly enough his opponent has NOT been called to the police, despite that during HIS meetings the social distancing was not observed either. And what about prime minister Morawiecki, who when campaigning for Duda was filmed doing exactly the same, but as well assuring everyone that “this virus is now in retreat, so there is no need to be afraid of it”?

Meanwhile, it seems that government activities against the opposition are, so far, still scrutinized by still independent courts. After the arrest of Roman Giertych was proven to be ungrounded (more on that here and here) the prosecutors were ordered to return all documents and computers they took during their unlawful search in his office…

But while high-profile politicians (as Giertych is still, after all, seen mostly as former politicians) can count on the support of lawyers, media and the public, the smaller people who are persecuted are often left alone. Just like a leader of the student representative council of a local university in Słupsk, who after politely asking during the meeting of the senate if the school is to take any action in support of the women strike, an hour later received an e-mail that she has been kicked out from the university. Just months before graduation! The university says that it’s because she failed in one subject, but due to the academic calendar, if she did, she failed it in September, so it’s a strange coincidence that the university decided to remove her only now.

But if you ask the government, it’s the Netherlands, who are the biggest problem with the rule of law in the EU. After their decision not to respect European Arrest Warrants from Poland as a rule has been overturned by the European Tribunal of Justice, the deputy minister of justice commented “Holland for many years is active in many fields, in which there should be less of that activity. They are an outpost of the leftist ideologization, that we have to face in European Union and in the Western world. Holland is an ulcer of the body of the EU”. Yeah, spoken like a true diplomat.

So let’s look closer at the democratic standards typical for the minister’s party. A few days back PiS again lost the vote in Sejm. It was enough for Kaczyński to wave his hand, and so deputy PM Gliński, after briefly conferring with him went up to the speaker. The microphones picked up his word “Elżbieta, the boss asks a favor, it seems we will have to do re-asumption of that vote”. And so she announced a short recess, after which the vote was repeated, this time with the “correct” results. So those are the standards in today’s Poland: Speaker of the parliament, who, according to the constitution is a second person in the state after the president, has to do as her boss, grumpy old man with a cat and just an MP, tells her.

But perhaps this country cannot just be left to work and everything requires manual decision by PiS politicians? The example of the illegally built castle in Stobnica (see here), which has been legalized by the Voivode (a provincial governor) despite confirming, that it has been built illegally (see here) seems to be a good proof of that theory. His decision has been deemed incompatible with the public interest and he had been dismissed by the prime minister while the prosecutors continue to investigate illegal construction in the middle of the Natura 2000 protected area.

It seems that prosecutors should look into another matter as well. A journalist investigation by Gazeta Wyborcza showed, that a recent funeral of “640 aborted children” (last week I made a mistake by using number 350, 350 was a number of tiny coffins in which those relics were placed) was not exactly a legal enterprise. The organizers, a little known foundation Nowy Nazaret, in cooperation with pro-life campaigners responsible for the vans with pictures of aborted fetuses parked all over the streets of the Polish cities, refuse to disclose where they obtained those fetuses from, but it seems that they are not, as they claim, aborted children. Many of them were results of perfectly natural miscarriages, some others were donated to science by their parents or the hospitals. In any way, though, the non-governmental organization had no legal means to come in possession of them, so basically speaking, they are burying down a bunch of illegally obtained medical waste…

I have to say one thing: I was never a religious person, but the Catholic obsession with bits of dead bodies – no matter, dead fetuses or relics of their saints – is something I am unable to comprehend.