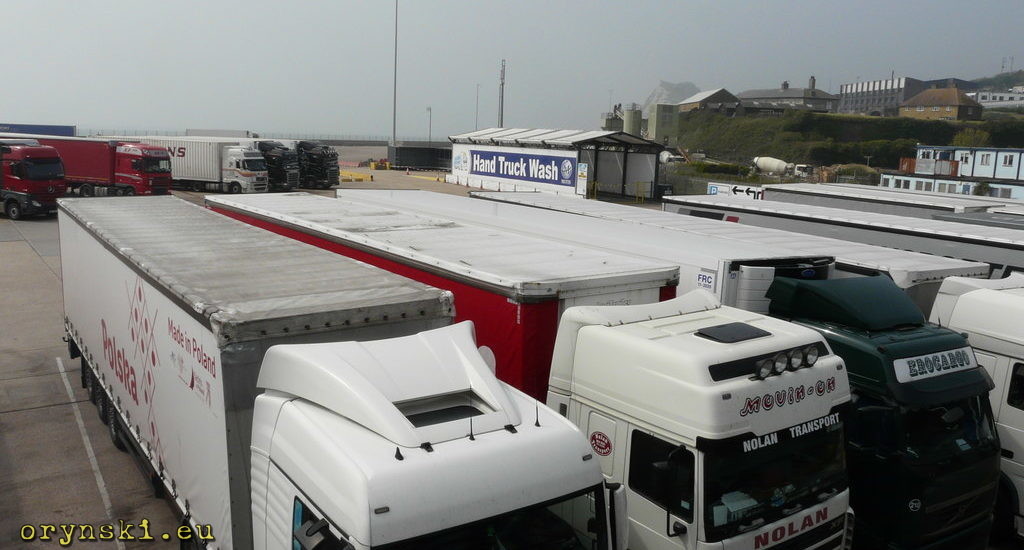 The situation in Dover did not look well for a few days already. A pre-Christmas period, cumulated with the rush to stack as much imports as possible before very likely no-deal Brexit on 1st of January resulted in the unusually high amount of freight traffic going through Dover and Channel Tunnel causing unprecedented (if we exclude situation of technical or weather difficulties on the channel) delays. The dramatic air footage from the 18th of December shows enormous queues of lorries awaiting crossing to France.

Fair play to the government for finally ending freedom of movement pic.twitter.com/5VveMcnFGJ

Some reports informed about 15 miles long queue. This was the worst situation in years. And then the closure of the border between the UK and France caused by the new strain of COVID-19 caused all those truckers – the vast majority of them from Europe – to be stranded in Britain for an unpredicted amount of time.

As some Polish drivers reported on social media even those who were already onboard ferries were asked to disembark and leave Dover port without being provided with any information or advice as to what should happen next. At the same time, the truckers were advised not to travel to port until further notice. That resulted in Kent being totally clogged with trucks and vans driving in circles, desperately trying to find a good spot to park. As this is difficult even in normal circumstances, and truck drivers are not permitted to drive for more than 9 or 10 hours per day, many were forced to stop on the hard shoulder, bus stops, and other unsuitable places. The local council acted swiftly and began slamming parking tickets on the illegally parked trucks:

Lorry drivers parked up on roads in Kent slapped with Parking Fines pic.twitter.com/l5PRJ3jazT

According to the Facebook group of local Kent hauliers, some vehicles have even been clamped by the authorities.

During a briefing the next day, Prime Minister Boris Johnson claimed, that there are only 174 lorries stranded on the M20 motorway. It is unknown if he was misinformed or lied deliberately, as the number at the time of speaking was several times higher, not to mention all the trucks scattered across Kent in places other than M20. The numbers are likely to be in thousands, as the Port of Dover only handles, on average, over 6500 trucks per day (data from 2019) with the nearby Channel Tunnel being responsible for transporting a further 4300 per day, so we can safely assume that after two days there can be as much as 20 000 vehicles waiting to cross.

Finally, the British government decided to act. Apart from regular “operation stack” – that is, closing a bit of M20 motorway and turning it into a makeshift-lorry park – they opened an old airport in Manston near Ramsgate and direct all freight vehicles there.

This is an amazing cinematic shot, a real reminder that we’re watching the season finale of the UK. pic.twitter.com/1nDgG947zu

Unfortunately, the drivers – some to be said to be stranded in enormous queues for days already, with no access to the toilet facilities, food, or water (the HM Border Service, along with some volunteers delivered a small amount of bottled water and some snacks only to some of them) found, to their surprise, that they are told to park on the runway on the old airport in the middle of nowhere where they are not allowed to use their portable cookers – even outside their cabs – to prepare themselves a warm meal or even boil a kettle. The fire safety is cited as the reason, despite that the trucks are spread apart from each other, unlike when they are parked on regular truckstop. Making pictures or filming is, apparently not allowed either. There was a garage nearby with a Co-op shop and small McDonald’s outlet, but, according to the online Facebook group of Polish truckers, the police quickly began confining drivers to the airport, so they are no longer allowed to go there. The truckers were unhappy, so they protested in the only way possible to them: by sounding their airhorns, which in turn made the local residents very unhappy:

Luckily a network of Sikh charities, some based as far as Coventry managed to organize hundreds of warm meals.

We are on the #M20 delivering hot meals and other snacks for the truckers who are stranded due to #OperationStack ! #BordersClosed pic.twitter.com/62bhdsu6En

There are also several grassroots actions amongst the Polish diaspora in the UK with people donating food and water to stranded drivers.

After some negotiations France agreed to allow truckers to enter, provided they will be able to show the negative result of a recent COVID test, and those are already on the way to Marston Airport:

Still, according to the French sources, the 48-hours ban on travel from the UK to France will be extended further so nor ferries, nor Eurotunnel won’t be available for travel to France before Wednesday morning.

The extreme backlog means that several of the stranded truckers from Eastern or Southern Europe won’t be able to get home for Christmas. It is also a problem for Scottish seafood exporters, as their goods will not be able to reach their destination before Christmas either. And it is unknown what will happen to those of the drivers, who will test positive for coronavirus: will they be provided with accommodation by English authorities? Or will they be expected to spend 14 days of their quarantine in their cabs, having to go for a long walk through a wind-swept, rainy airport every time they want to make use of the portable toilet provided for them? If they got sick, and their sickness lasts longer, beyond 1st of January, will they be still allowed to receive medical help in case of no-deal Brexit?

One thing is sure: due to no-deal Brexit looming over Britain in days, many European hauliers were already refusing to take the freight into Britain. According to one speditor from a Polish haulage company, the rates for the Poland-UK route doubled even before the covid-related ban caused that situation. Now people from the industry report in social media that some hauliers demand triple the usual rate and refusing to go until the client signs an annex to contract, obliging him to pay up to 3000 euros for every day the truck is held up in Britain. That will surely be visible in the prices of everyday products on the shelves of British supermarkets – with no-deal Brexit tariffs slammed on the price of the products, 2021 starts to look pretty grim for residents of the UK.

UPDATE: At least two drivers reported on social media that the number of portaloos is nowhere close to meet demand, so they are already overflowing. Also due to long queues, many drivers decided to relieve themselves on the side of their vehicle, as they did not wanted to catch coronavirus in the crowd. As a result of that, the whole airport reeks of piss already…

UPDATE (23:02): French embassy in the UK informed, that drivers who will only transit France will not require COVID test.

UPDATE: 23 December: It is now confirmed that drivers need to have the test after all, but this morning several French registered lorries were allowed to cross the channel, which caused a riot amongst truck drivers of other nationalities stuck in Dover.

UPDATE: 23rd December, 17:15: First trucks with drivers who tested negative from COVID are released from the airport. Meanwhile Dover is still blocked, about 100 drivers are clashing with the police. There is hearsay about that it will be possible to get tested at the ferry terminal as well.

This piece was written for Britské Listy
Picture (not related to actual events): John Baker, CC 2.0

“Our fantastic future out of EU”