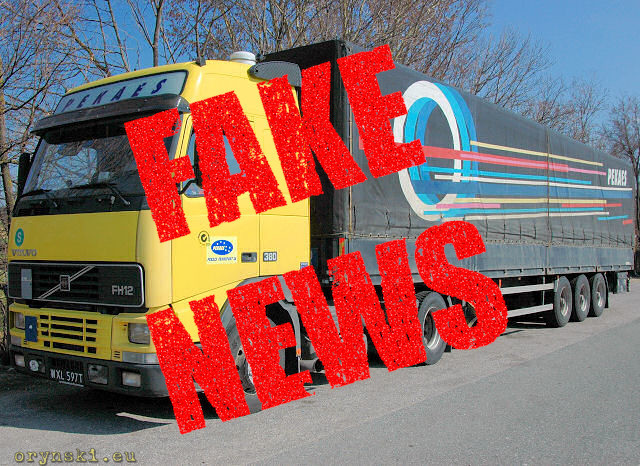 If you are an Eastern European living in Britain, you will well know that feeling. A frustration, when some stupid myth circulates in Britain over and over and no amount of proof or clarifications would convince people that the truth is different. Well, we are witnessing yet another instance of that.

With the Brexit disaster looming, there is a discussion now about the expected issues with the lorry traffic through Dover in the (more and more likely) event of no-deal Brexit. It has all begun with the James O’Brien show, when a British Haulier phoned in. Amongst his right observation about that most of the traffic that imports goods from EU to the UK is served by the European Hauliers. He rightly points out that with all Brexit-related hassle and all that new red tape created by Britain’s exit from the EU, European Hauliers might simply not be willing to come to Britain any more – because why should they, there is plenty of business for them in the remaining 27 EU countries.

But during that conversation the caller also spreads some false information. He says that the companies might not want to come here, because they pay their drivers per km driven, and their drivers won’t be willing to come to Britain to be stuck in the queues for days. This is utter rubbish.

While, obviously, Owner-Operator drivers charge per km – both in Britain and on the continent – no respectable employer would pay their drivers this way. Simply, because it’s illegal. Regulation No 561/2006 of the European Parliament and of the Council from 15th of March 2006 clearly states, that “a transport undertaking shall not give drivers it employs or who are put at its disposal any payment, even in the form of a bonus or wage supplement, related to distances travelled and/or the amount of goods carried if that payment is of such a kind as to endanger road safety and/or encourages infringement of this Regulation”. And paying drivers per km would clearly encourage drivers to drive for longer hours or speeding so they can clock up more kms. Just look what is happening in the small van express transport industry, that is not regulated by those rules, with drivers driving non stop for 20 hours etc.

Incidentally, in Poland for example, this is also regulated by the local law. In Poland it would be art. 26 ustawy o czasie pracy kierowców [regulation on driver’s working time] from 16th of April 2004 (Dz.U. z 2012 r. poz. 1155) which has wording roughly the same to the one form the later European regulation. Also, it would be not in the interest of any haulier to pay drivers in that illegal way, as per Ustawa o Transporcie Drogowym [bill on road transport] the company faces a fine of 8000 zł (circa 1600 GBP) for each driver who’s pay is related to the amount of km travelled or value of cargo transported. More on that, in Polish, here.

Meanwhile this rumour is now being repeated all over British media, including English Language version of the industry portal “trans.info“. Who should know better, because, being industry specialists, they know very well, that the “Lithuanian Haulier with 6000 trucks” mentioned by James O’Brien’s caller will be Girteka, about whom they wrote themselves in their Polish language version, clearly informing that Girteka pays daily rate.

In other words: NO. WHILE THERE MIGHT BE SOME COWBOY COMPANIES TRYING TO PAY THEIR LORRY DRIVERS PER KM, AS A RULE COMPANIES WON’T DO IT, BECAUSE IT’S ILLEGAL.

I am afraid, that this is a cry in the wilderness. The slagging of Eastern Europe and looking down at us is deeply rooted in British culture. I recalled an old story I wrote about in one of my pieces some years back. It was from the time when I worked as a courier driver for a British company, when a warehouse man, taking me for a British person, was sharing his opinion with me about a Polish driver who drove an older van. “Poor bugger, driving this old banger”. I told him that his van might be old, but it’s much better maintained than my British one, to which he answered “no way, those commies know shit about mechanics, they are ages behind us, our British vans are always maintained to the highest standards!”. Even when I showed him my dashboard with the message saying “Service overdue by 26700 miles” he still hasn’t changing his mind. “Oh, your company must employ Polish mechanics as well then” – he said.

And this is how your life looks if you are Eastern European in Britain and try to correct some deeply rooted misguided stereotypes. You just end frustrated, they never listen. Yes, it can hurt sometimes, but it’s nothing compared to the consequences such thinking might have for Britain. Because the whole mess they are now, having to prepare for disaster that Brexit is most likely to end with, started with that very think: spreading stupid, fake beliefs about Eastern Europe. You should know better by now, Britons. Allegedly it’s us, Poles, who are unable to learn from our own mistakes…

FACT CHECK: Is COVID pandemics a fake, and are Dutch doctors about to sue their government for it?