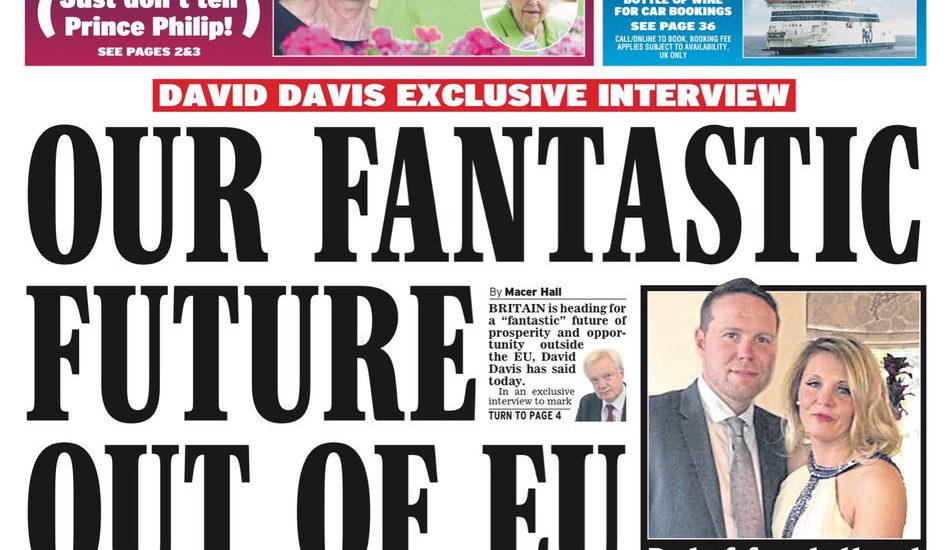 Two years passed since the referendum in which Britons have decided that they no longer want to be in the European Union. To celebrate this, Daily Express published an interview with David Davis, the Brexit minister. It has been entitled “Our fantastic future out of EU”. I hoped that from reading it I will finally be able to learn how exactly they see practicalities of Brexit, future relations between UK and the EU and so on. Alas, no chance for that. It was just yet another bunch of round words about “Global Britain”, “bright future” and about how great idea it was to quit the EU.

It just happened that I worked on a text about how Brexiteers imagine Brexit. After all, we are about 9 months from the Big Day. It seems it is not so easy to find what they expect it to be. I tried to pull the tongue of a few of my Brexit friends. I trawled some discussion forums, even got involved in a couple of discussions on the topic – to no avail.

It seems that today there are two kinds of Brexiters. Those who believed (and often still believe) that leaving the EU is a good idea, but what happened since the referendum is not exactly what they hoped for. I got nowhere in talking with them, as even though some of them murmurs that things are going bad for Britain now, they cut the topic, or hop to the field in which they feel better: i.e. to criticizing flaws of the EU.

Hard Brexiteers, on the other hand, have very much to say, but nothing of value. They seem to live in some imaginary world, in which Great Britain is still Great, and European Union begs it to be allowed to dine at its richly set table. Even David Davies mentioned it in his aforementioned interview when he said, that Germans sell a million cars per year here and they will want this to continue. This is generally true, but if the EU will lose this market, then they will sell 10% cars less (let’s forget for the second that Britain sells a significant number of cars to the EU too). It will be Britons who will have a problem unless they are going to give up driving, as even cars manufactured in the UK are built mostly from components imported from other European countries. And some car manufacturers already suggested, that if Britain leaves the common market, they will seek to move their production elsewhere.

Of course, Britons can buy their cars elsewhere. Even today it’s nothing unusual here to see cars considered exotic in the rest of Europe such as Chinese MG or Great Wall, Malaysian Protons or Indian Tata. But while China or India will be happy to sell their cars here, I doubt that there is a big market for British made vehicles in there. So this is probably even worse option for British car makers than staying in the EU.

And this is how it looks in every field. Great Britain has very close economic ties with the rest of Europe, and while hard brexiters are shaking their swords and assure me that they don’t need Europe for anything, as Britain is so great that it can manufacture everything it needs just as it was doing in those good old times, I still doubt that it is able to meet all its needs. Let’s just stop here: do they really believe that Scotland or Wales are about to grow olives or grapes? Are they really ready to give up Sicilian oranges and replace them with turnips grown at the fields of East Anglia?

Therefore one could think, that my question how the trade relations with Europe are to be continued after next 9 months is not so stupid. Surely the country HAS to be preparing for the Big Change?

I asked about that on a couple of internet forums. I failed to get any answers. But heard a lot about how Europe is milking Britain, and how it is ready to play dirty just to prevent the Blighty from leaving the EU, as without Britain the European project is doomed. I heard that it’s Europe’s fault that Britain is in ruin nowadays, as all its wealth and industry was stolen by Germany and France. I am told that I simply underestimate British capabilities, as I forgot that this is the country that won Falkland war, so what is some silly Brexit for the brave Britons. Last but not least, it’s in Europe interest to sell its stuff in Britain, so they will work something up for their benefit. And if Britons don’t like it, then they will smuggle what they cannot make here (like those oranges) through Northern Ireland and make the rest here. Yes, the only hard brexiter who actually has some plan was for real considering smuggling as a viable way to get supplies to the British market. And when I asked about the workforce for all those new factories and farms that will have to be open to meet British demand after it cuts itself from the European market, I was told that they can always bring some Asians. It has been suggested that it will be even better than Eastern Europeans – probably because, unlike European Citizens, Asians will barely have any rights here?

Both discussions kept drifting into one channel: heroic Britain finally breaks the chains and breaks free from weak European oppressor. Europeans run away in fear, as they know that against such a competitor, the European Union is doomed (of course it was not doing great anyway, and this is why wise Britons decided to leave the sinking ship, so they can look from outside and say “I told you so”). But I was persistent. I was still coming back to those petty practicalities. I gave up everything else and asked one simple question: where will all the lorries entering Britain have their customs cleared. This is actually pretty serious question: at the moment only trucks from countries like Switzerland, Norway, Morocco, Belarus or Turkey need to have their customs cleared in Dover, and there is very few of them – and yet the Freight Clearance Centre in Dover barely can accommodate them all as it is. With average 6 lorries disembarking the ferries in Dover every minute, it will be much, much worse – now it is nearly impossible to even to find a place to park a truck, they are virtually everywhere – on the junction, on the bridges, on the pavements and hard shoulders… Some say that trucks could have their customs cleared online, but “online” is not some magic fairy tale land: that will require a completely new computer system able to deal with such a vast amount of loads, creating one like this is not exactly a side job for the weekend. And one cannot even start until the exact deal between EU and UK will be known… So if nothing is to be done, the 19th March of 2019 could be the biggest logistic disaster ever.

It was explained to me that this will be the problem for Europe. After all, most of the lorries are theirs anyway. Secondly, with Britain having new trade partners outside Europe, most of the stuff will be coming here on ships anyway. Ok, but first, the lorries that bring, for example, oranges here, go back loaded with British products such as lamb or beef. So it is as much in the interest of Britons as in the interest of Europeans to keep them rolling. Which, if Brexit turns out to be a disaster, can be problematic, as even now many European hauliers give up on runs to Britain due to the problem with immigrants in Calais. After all, there is enough roads in other 27 countries of Europe to make a living from driving on them, just as the producers in Europe will have 27 other countries to sell their goods in – oranges or olives that are now sold to Britain can be eaten by other Europeans. In Poland, for example, the market for olive oil records two-digit growth every year for over a decade. Meanwhile for Britons loss of access to European market can be problematic, as I doubt they will export their lamb to New Zealand or beef to India…

And about those ships? Ships still need to dock somewhere. If they are suddenly to take over the transport of 40% of British international trade, the ports will need to be expanded. And so the infrastructure surrounding it. If we remember that most British ports are located in big cities, then it might be really problematic to allow access of all those extra lorries – they could simply clog the road networks surrounding the ports totally. Of course, it can be done, but this will take years. Even 10 years might be unreal perspective, not to mention 19th March of next year… Some say Boris Johnson has ordered floating piers from China – OK, it’s nice, ships could dock at them, but then what? And can he have them up and running in nine months?

I got a bad feeling that it will all end in tears. Remember that harsh winter a few years back? 6 days of snow in France and on English motorways and the fruit and veg stalls in Scottish supermarket were nearly empty. I tried to find out: is there is anything being done to prevent that? Is any infrastructure built or even planned? Has anyone announced a tender for the new computer system for custom services? I was really trying to find the answers, but I was simply branded a troll and blocked. Well…

So what are my conclusions from this simple experiment? Well, I tell you one thing. I am aware, that it might be an option for me that I will have to move out of Britain. I am already considering my options, doing some research, planning ahead, putting some money aside and I have even started learning a new language. And for me leaving Britain is easy: I don’t have kids, debts, mortgage, long-term commitments. I could pack my things up and leave at any time. Brexiters pulled 70 000 000 people out of Europe and not only they had any plans for that, but it seems that they still don’t think that they need to look into all those petty little problems that are going to turn up on 19th of March. The vision of “fantastic future out of EU” in which Great Britain, like from the touch of a magic wand overnight becomes a wonderful empire, looking down at this silly Europe and dealing as equal with economies such as USA or China while European Union tumbles down into chaos and finally breaks apart is indeed fantastic. But in that other meaning of that word:

imaginative or fanciful; remote from reality.

And I wonder about one thing: even in if 50 years, Britain will be better out of the EU, it is pretty likely that in the shorter perspective things are going to turn badly. Will Britons still blame European Union for every single of their problems?

What has happened to ‘better together’ suddenly?