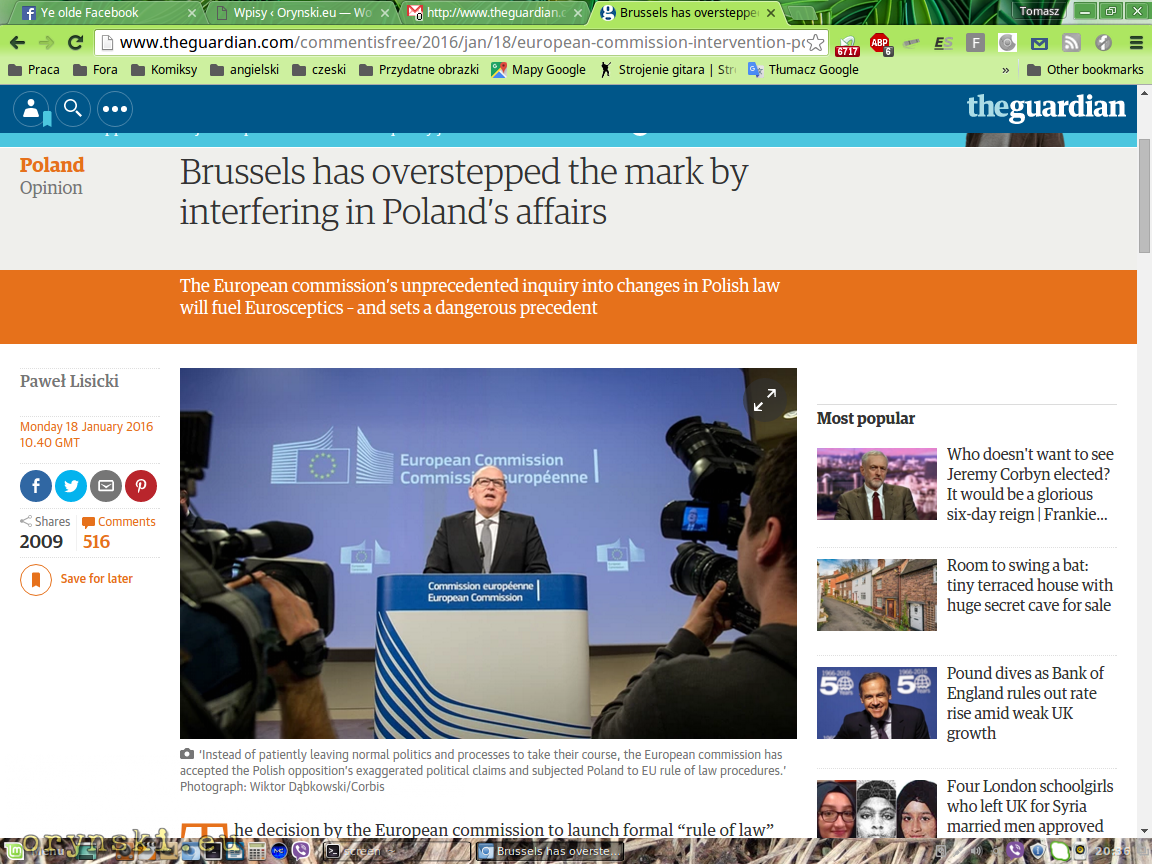 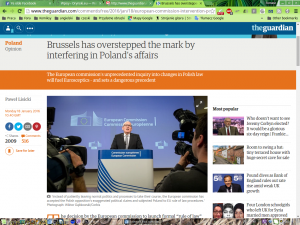 “Poles of worst sort”, as Jarosław Kaczyński branded those, who inform foreign media about the situation in the country, have suceeded in their attempts to bring Polish issues to the attention of the rest of Europe. EU institutions are now taking a closer look on Law and Justice (PiS) actions and disrespect to the constitution. Therefore PiS had to take action and convey their own version of the events. Since they know that they have no chance to win discussion based on fact, they talk, like Polish prime minister Beata Szydło during today’s debate in EU parliament, about honour, Polish history and democratic mandate they have to introduce their changes but evade facing the charges at all costs.

In desperate attempt to draw away Europe’s attention from the important things PiS has called all hands aboard, but they all sound like barell organs playing the same tune all over again: they all ignore important facts, twist the reality, pick out some facts out of their contexts and generally try to create the smokescreen that would hide the important issues.

Example of such publications is a recent piece by Paweł Lisicki at Guardian’s opinion pages, where he tries to play down the issues that got European Commission interested in Polish affairs in the first place. Let’s see what he decided to omit in his attempt to draw attention away from PiS’ unlawful actions.

“This victory came about in good part because millions of Poles had become disillusioned with the previous government’s abuses of power” writes Lisicki. This is basically true, but he has forgot to mention that he himself played a significant part in making sure, that Poles will no longer support previous government. The last decade of his journalistic career is build solely on conveying PiS’ versions of events and smearing it’s enemies. During his time as an editor of daily Rzeczpospolita, he was accused of openly supporting PiS, which was later confirmed by the court. Since then, he became an editor of the openly pro-PiS magazines Uważam Rze and then Do Rzeczy. Those magazines thrive on smearing Civic Platform (PO) and president Komorowski while ignoring any wrongdoings on behalf of PiS. Yet their publicsts dare to call themselves “Independent journalists” who “show Polish reality as it is, not as mainstream media would like to see it”. Now, Lisicki’s magazine along with other “independent” media turned to parliamentary opposition and Commitee for Defence of Democracy (KOD), that protests against PiS actions, and compare their actions to one of the biggest act of treason in Polish history.

So having cleared the matter with who Paweł Lisicki is, let’s focus on what he actually wrote for Guardian. He claims, that freedom of speech was in danger under previous government and he gives an example of the special services who tried to seize a laptop of Sylwester Latkowski, then editor of Wprost, who has published illegal recordings of the top policitians from the government. This is basically true, but it has to be seen in wider context. Sylwester Latkowski is a convicted criminal, who, before turned himself up for the police to serve his time in jail, allegedly spend few years in hiding in Russia. It is unclear what he was doing there, and while involvement of Russian intelligence in those recordings is under investigation, it is no brainer that such a person will fall in scope of the special service’s interest.

Lisicki’s attempt to blame PO for the Constitutional Tribunal is an old chestnut on the PiS side. Yes, it’s true that PO tried to cram into it two additional judges, but nobody else but Constitutional Tribunal itself ruled it’s action unlawful and invalidated election of those two additional judges. Done and dusted it would be, if not for PiS’ president Duda, who refused to swear into the office those three judges who’s election was confirmed legal and has sworn 5 judges elected by PiS instead during their late night parliamentary raid. So if you want to compare behaviour of those two parties, PO in it’s outrageous fact attempted to have two additional judges selected. PiS, on the other hand, managed to get three unlawfully judges sworn into the office. PO attempted to bend law and got slapped in the wirst by Constitutional Tribunal itself. PiS openly breaches the constitution and then changed the laws to ensure that the Tribunal will be unable to stop it from doing so again. It’s like someone saw a robber trying unsuccesfuly to steal purse from old lady, then stepped in to take her whole handbag, beat her badly with a baseball bat and then claim to be a hero who stopped the act of theft…

On the issue of the State Media, it’s true that they were criticized by many. But so is BBC, yet as far as I remember, David Cameron did not attempted to purge it from everyone but hardline followers of his government after last elections. Popular journalist Tomasz Lis, who’s name translates into “fox”, become a target of organized hate campaign from the right (including presence of “transparents” with a dead fox on the pro-government raids organized by PiS). Now he has lost his program in public TV, which is perceived on the right as a success in it’s action of returning the balance to the public media. But one has to remember that Jan Pośpieszalski, a columnist from Lisicki’s magazine, also had his own program in state TV. And he wasn’t the only pro-PiS publicists and broadcaster present in the public media. Obviously there was some balance, as the viewer could watch either openly pro-PiS Pośpieszalski or openly anty-PiS Lis. Now this choice is taken away and public media are turned into PiS propaganda tube.

The most extreme example of Lisicki’s manipulation is blaming PO for not respecting rulings of the Constutional Tribunal. He accusses it of failure “to implement dozens of such decisions”. This is, again, true, but there is a catch. First government of Donald Tusk has inherited almost 200 of unimplemented rulings of the constitutional tribunal from the previous government of Jarosław Kaczyński. At the end of it’s rule, there were only 48 of such rulings, most of them obsolete as the law questioned by the Tribunal has been already replaced by the new legal acts.

Last but not least, Lisicki moves to attack and lectures Europe on that instead of being worried about PiS actions, it should stick to it’s own problems, such as “failure to control of it’s own borders”, as if this problem was not a Polish problem as well, which is quite funny if we remember, that over 1000 km of Polish borders is at the same time the border of EU and Schengen.

Finally Lisicki ends with another regular PiS refrain: “There is scarcely a country in the European Union where the elected president and parliament now have a clearer mandate for change.” The fact is that approx. 18% of Polish voters supported PiS in last elections and many of them were fooled by PiS electoral campaign that apart from smearing previous government focused on assuring those who were unable to trust it, that it’s actions from decade ago now are a things of the past and that it is now a modern christian-democratic party in European style under leadership of new generation of politicians such as Andrzej Duda or Beata Szydło. But as soon as the exit-polls were announced mask dropped. No wonder, that even some of those, who voted PiS felt cheated. Today most polls suggest a significant drop in support of PiS and a huge rise in popularity of the new liberal party .Nowoczesna, who’s leader took advantage of the PO’s inaction and positioned himself as the leader of the opposition. This, along with the fact that regular manifestations organized by Commitee for Defence of Democracy (KOD) that are taking place regularly since December gather tens of thousands of people in Warsaw and all across Poland. There are protest allo ver the world whenever there is significant Polish minority and last Saturday 200 people protested under Polish embassy in Budapest. KOD’s leader, Mateusz Kijowski, states clearly, that it’s actions are not against PiS or against the result of democratic elections. Their only aim is to ensure that the people in power refrain from breaking the law and ignoring constitution. Obviously then PiS’s mandate to make such drastic changes is at least questionable.

But to end on a positive note, I am actually surprised to see such a moderate piece by Lisicki in Guardian today, as less than two weeks ago in his piece for Wirtualna Polska, one of the biggest Polish language portals, he called at foreigners who are against limitations of free speech in Poland to “stuff themselves up” and branded them as “pitiful” and “laughing stock”. If he can change his behaviour under the scrutiny of European observers, hopefully PiS can do it as well.