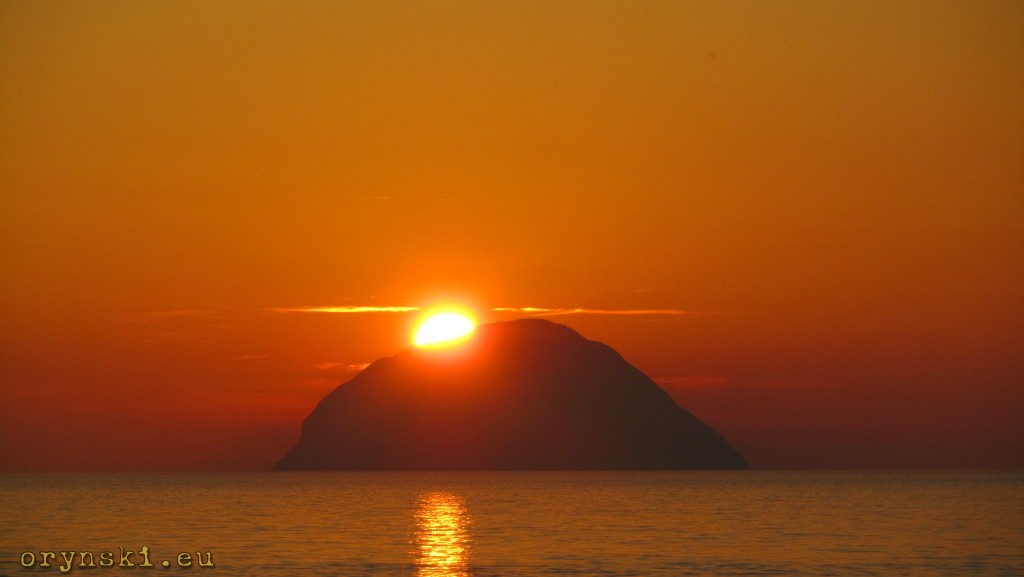 The usual direction of sightseeing trips that start in Glasgow is North. No wonder, if we remember, that by less than one hour drive you can be in such beautiful places like Loch Lomond or Loch Katrine, see beautiful Aberfoyle, visit Rob Roy’s grave in Balquihidder or visit historic monuments of Stirling. But the opposite direction also has much to offer, therefore today I propose trip along the coast to the southernmost point of Scotland.

Living Glasgow is facilitated by M77 motorway. Soon after Thornliebank a steep climb starts. It’s worth to take a glance in the rearview mirror, as here you can see one of the nicest panoramas of Glasgow.

The motorway after less than half an hour becomes ordinary dual carriageway. Soon another nice view opens. There, you can see Prestwick airport, that used to be one of the most important airfields during second world war. From here planes that arrived from USA were distributed to the locations closer to the front line, among others by Polish women pilots such as Jadwiga Piłsudska. Above the airport we can see the sea for the first time. At the Monkton roundabout we go left, and from this moment we will be going along the coast.

Our first stop is Ayr. Here, apart from the walk in the town or along the beach (it’s worth to go to the end of breakwater that guards entrance to the port) we can see one of the oldest bridges in Scotland, the Auld Brig.

According to the legend, the first crossing in this place was funded in 1250 by two sisters after beloved man of one of them has drown during his attempt to ford the river. Today in the same spot we can see a stone bridge build in 1470, used by cyclists and pedestrians. The nearby New Bridge, that was open in 1788 was destroyed by the flood in second half od XIX century and the Auld Bridge again had to cater for all traffic. This even was foretelled by Robert Burns in his poem “The Brigs of Ayr” in which the ghost of the old bridge is mocking his younger collegue:

‘Conceited gowk! puff’d up wi’ windy pride!
This monie a year I’ve stood the flood and tide;
And tho’ wi’ crazy eild I’m sair forfairn,
I’ll be a brig when ye’re a shapeless cairn! ‘

If you want to know more about Scotland’s national poet, you can visit nearby Alloway, in which apart from his place of Birth one can visit a modern, dedicated museum.

Those who prefer to continue the journey south, might want to take a side road leading down to the small village of Dunure.

Although the village itself was build in the beginning of XIX century around the harbour, on the nearby rock one can see ruins of the gloomy castle that stood there since XIII century. And soon after returning to main road, we will have a chance to enjoy a misterious event: here, at famous Electric Brae, the laws of physics seem to be bent, as cars appear to roll uphill on their own. This occurence, today explained by optic illusion, was attributed by scholars of the past to the mystery force of electricity – hence the name.

Soon after Electric Brae narrow road on the right takes us down to the beach of Croy Shore, from where the next destination, Culzean Castle, is nicely visible.

Culzean Castle is not your typical Scottish castle if have in mind another gloomy stronghold on the inaccessible rock. Culzean is, in fact, a huge mansion surrounded by beautiful gardens. Yes, it might be constructed on the high cliff, but it’s easily accessible from the other side.

In this castle, that is one of many properties of National Trust od Scotland, one can spend all day, visiting it’s amazing interiors with amazing collection of weaponry, walking around vast gardens and even going down the cliff to the peebly beach, from where a beautiful panorama of Arran is visible with a bit of Mull of Kintyre peeking from behind.

An unusual fact is that this castle was illuminated by gas lighting up to 1940’s and it was running it’s own gas works, that are now available to visit. In the Gasman’s cottage a small museum of gas industry is located.

National Trust of Scotland also takes care of Souter Johnnie Cottage located in nearby Kirkoswald. It’s worth paying a visit not only because it was a house of one of Rober Burn’s characters, but also to see, how XVII souter lived and worked. If you take that diversion, you might also want to visit ruins of Crossraguel Abbey. But if you decide to continue our trip south, you will soon find yourself in a small village of Maidens with a nice sandy beach. A mile or so down the road, after crossing Donald Trump’s Turnberry golf resort, the road will join main route to the south – A77. Another mile or two down the road, we’ll find ourself in a slightly bigger town – Girvan.

Girvan is still a lively place for mariners. In the river estuary a small shipyard is located that builds and repairs fishing boats. Here you have another chance to walk along the beach and look at Ailsa Craig, a rock in the sea that is one of the only two places from where curling stones come from. Due to it’s location on the sea route from Clyde to Belfast it is nicknamed “Paddy’s milestone”. The parking next to Girvan beach seems to be for some reason dominated by seagulls, so if you want to witness scenes like from Hitchcock’s “Birds”, that’s your place:

Soon after Girvan road leads us very close to the shore. Here at the roadside car park a monument to a Russian battlecruiser Варя́г is located. This historic ship made it’s name during Russian-Japanese war and after very interesting history has met it’s end crashing into the nearby rocks. After passing through Ballantrae, the road climbs with several bends to the hills only to get back to the shore few miles later. Here in Cairnryan a new ferry terminals are located and regular crossings take cars and trucks to Ireland. Until recently ferries were going to the end of Loch Ryan to use Stranraer pier, therefore arriving to Stranraer by train is an unique experience: a train station is located at the pier going deep into the loch, so it’s passengers (especially ones who sit on the right) have a feeling that train, after leaving a shallow ditch, runs at full speed into the water.

A good side of ferry terminals being moved down the loch is the fact, that Stranraer’s streets are no longer dominated by heavy trucks, making a stroll around the time much more pleasurable. It’s worth to pay a visit to the Angew Park located at the seaside, where a miniature railway rides are sometimes taking place.

On a rainy day there is still plenty to do in Stranraer. One can visit city musem (open all year round) or the castle (open during the summer). The latter, apart from interesting exhibitions gives also the opportunity to see the town from the viewing platform on it’s roof.

But Stranraer, although located as far south as Carlisle, and being last place with a gas station on our route, is not the end of our trip south yet. This town lies at the isthmus connecting mainland to The Thins pennisula, that is undercut by Loch Ryan from one side, and by Luce Bay from the other. So there comes a question – should we continue south, or should we go north for a change?

Let’s take a diversion north first. Here, the main attraction is the Corsewall Lighthouse build by famous Lighthouse Stevensons. Today it hosts a luxury hotel, but it’s location at the tip of the pennisula allows the visitor to enjoy a panorama from Girvan, through Ailsa Craig, Allan and Mull of Kintyre to Ireland.

Apart from Stranraer, the biggest town on The Rhins is Portpatrick, located at it’s west coast. This little town, surrounding the port located in a small bay, was a closest safe haven to Ireland, thus serving as a ferry terminal for many centuries. Regular services to Ireland were operated from here since at least 1616. But as XIX century saw bigger ships entering service, it’s port became too small and the ferries started to call at Stranraer instead. The town started to deteriorate, but luckily it managed to reinvent itself as a tourist destination. Thanks to it’s unusually sunny climate it still remains a popular holiday destination.

For those for whom even small tourist places seem tiresome with their noise, Port Logan might be more attractive. This small village located just few miles south has only a small camping, bed and breakfast and a little pub. But the view over small harbour located in the sandy bay are truly amazing. The row of little fisherman’s houses constitute the most of the village.

On the way from Portpatrick to Port Logan it’s worth to take a small detour in order to visit Kirkmardine church, located among the grassy hills. Here some ancient monuments from early days of Christianity are exhibited.

But the southernmost village does not mean that our journey has to end yet. The road writhes further sout taking us through the grassy pastures to finnally take us to the Mull of Galloway.

Here, apart from climbing to the top of it, we can take a steep stairs down to the fog horn, that seems to be truly southernmost point of Scotland.

From Mull of Galloway on the good day one can see not only Ireland but also Isle of Man. If you prefer to look a bit closer, this place is a paradise of birdwatchers. And if weather is not so friendly, you can always get a hot tea in the nice cafe located at the car park.

But if the weather is nice, it’s worth to spare some time to visit a branch of Edinburgh Botanic Gardens – Logan Botanic Gardens where, thanks to local microclimate, tropical plants feel like home. And if that’s not enough for you, a nearby Ardwell House and Gardens has also a lot to offer.

But remember to plan well your return to Glasgow. If you manage to make it to the stretch of the road between Ballantrae and Girvan just before sunset, you will have an unique opportunity to watch sun setting over Ailsa Craig. And then, like Saint-Exupery’s Petit Prince, it will be enough for you to move just few hundred meters down the road to enjoy the whole spectacle again, as the sun will be setting behind the horison…

The journey from Glasgow to Mull of Galloway takes about 3.5 hours, so for someone who don’t want to see everything, it can be an option for a nice day out.