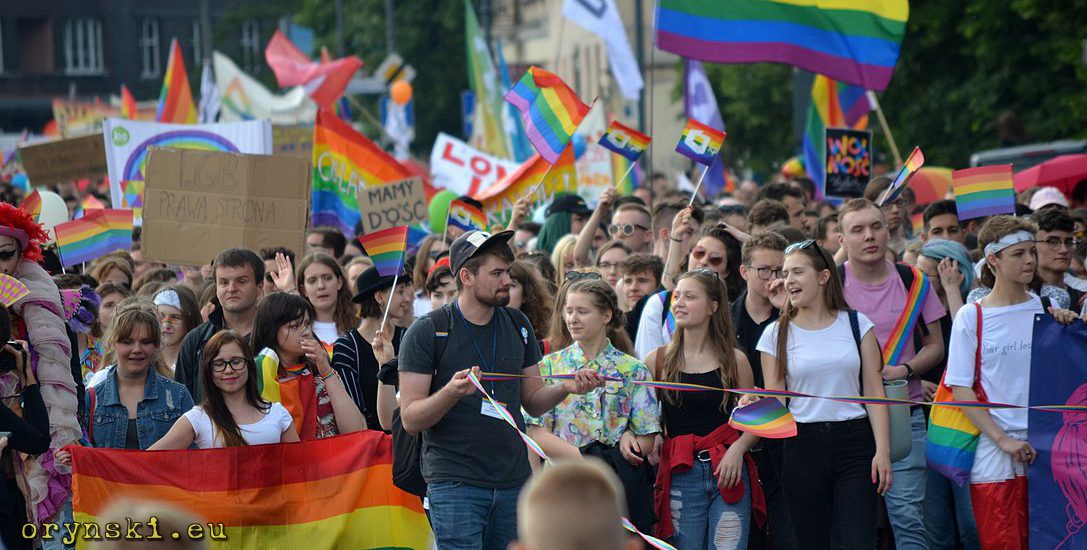 The pride month has begun. Apart from the usual butt-hurt in social media, where right-wingers threaten the companies who changed their logos to reflect their support for the LGBT community with taking their business elsewhere (last year’s losses from this boycott were estimated at about 12 zł 56 gr.) there are some more serious things happening: In Wrocław there was a small manifestation, but alas not a joyful one. People gathered in support of a man who was badly beaten for “looking like a fag”. He reported the case to the police, but – according to him – the cops told him to “just give up” and “stop going to places like that” (the thing happened on a popular island with a park right in the city centre). The police allegedly were not interested in the homophobic things the attacker was shouting at him. Instead, they seemed disappointed that he can’t tell from which supermarket the trolley, with which he was hit in his head, was stolen.

But if you think the behaviour of the police was bad here, brace yourself, as this was nothing yet. Remember when a couple of weeks back people walking the street with an LGBT flag have been spat at and attacked by two men on bicycles and the police held them up to allow the attackers to flee? Well, now we know why. The victims of that attack got the information from the prosecutors that bringing charges against the attackers is not in the public interest, and if they want, they can pursue it as a civil matter. Which the attackers already did, claiming that it was them who were attacked. But at least we know why the cops rushed so keenly to help them: LGBT activists were attacked by off-duty police officer Krzysztof Gręda and his son.

Apparently, in Poland, it is too dangerous to “look like an LGBT person” – no matter if you decorate yourself with a rainbow flag or just “look like a fag”. But on other hand, the whole processions of men in dresses marched the street recently, in numbers that – with the exception of Women’s Strike – haven’t been seen in public since the beginning of the pandemics. The participants of those marches were spreading their ideology with no regards to the feelings of the onlookers who might now have wanted to see it. But this is OK because those were not pride marches: I am talking about Corpus Christi processions here, which are, strangely, not considered to be mass gatherings, so there is no limits on the numbers of participants…

Seems that some more marches are in the pipeline. The nurses and midwives organized warning strikes. They are fed up with the fact that while doctor’s wages can be pretty decent by now, they are still paid pennies for their hard work. The healthcare system is heading towards the cliff edge, as due to the nurses being underpaid for decades, there is very little influx of young blood into the trade, which results in that average age of a Polish nurse is now 53 and many of them work themselves to the ground, having two or even three jobs – partially because they need more than one to survive, but also because there is no-one else to take care of the patients.

Maybe at least they can have some of the jobs taken off their hands if the visit of the Minister of Health to their hospital would be organized? It seems it is working in education: when Minister of Education Przemysław Czarnek arrived at a Special School in Łuków near Lublin to celebrate its 60 anniversary in educating children with special needs, parents of those “less aesthetic” children were ordered to take them away from the school on that day. Also the school parking – by definition full of places for cars delivering kids with disabilities – was to be closed so the VIP’s can be driven right up the doors.

This seems to be a popular trend in Poland recently. A soap opera actress made headlines after she shared her thoughts on ugly people on social media. According to her, there is a new trend of showing ugliness on social media, and she is not happy with that, she would apparently like to see beautiful people only. She could hope that her appeal was met with understanding, as there were several calls to remove PiS’s Ryszard Terlecki from his job as a deputy speaker of the parliament, but, although he is not a most beautiful person (it is a piece of public knowledge that during his hippy times he experimented with drugs a lot, including sniffing glue, and it gave his face a countenance worthy of a member of The Rolling Stones), it was actually about something else. It was about his tweet in which he expressed his anger that during her visit to Poland Belarusian president-in-exile Svetlana Thihanouskaya not only met with opposition mayor of Warsaw Rafał Trzaskowski and participated in unveiling the monument to the Solidarność movement but agreed to get invited to an event that he organizes to promote democracy. Terlecki reacted on Twitter, saying “if she wants to advertise anti-democratic opposition in Poland and participate in Trzaskowski’s events, then let her look for help in Moscow. We should support Belarussian opposition that does not stand with our enemies”. He was not the only one who does everything to prove, that Belarussians can’t hope for any help coming from PiS’ Poland. Agnieszka Romaszewska, editor of the Polish government-sponsored TV station Biełsat TV criticized Raman Protashevitch for that he let his torturers force him to make that television speech: “Part of his life was broken by Lukashenko’s regime, part of it he destroyed himself. Belarussians are getting a crash course in courage and cowardness, sacrifice and egoism, solidarity, rebellion, treason…” – she commented. The Director of a Polish institute in Moscow seconded her by expressing his own thoughts on the Protashevitch’ situation: “The first IRA had a rule: if a tortured person breaks and tells on others, one should not be angry on him, as it’s hard to criticize tortured person for giving up. Such person should be shot, calmly and without anger”. Other idiots were equally quick to judge the kidnapped journalist. But to be fair idiotic reactions could be heard coming not only from the right: when a Belarussian activist Jana Shostak protested outside the Belarussian embassy, many commenters, including a left-wing female (!) MP was mostly focused on the fact, that she had a deep cleavage and her nipples were visible through her top. Because yes, when Lukashenko’s thugs torture opposition activists, Jana Shostak’s tits are the MOST IMPORTANT THING that we should discuss.

Perhaps we could learn how to be a hero fighting the oppressive regime if the planned documentary movie on Jarosław Kaczyński’s heroism went ahead (I somehow suspect there would be no tits in there), but it seems it might not happen after all. First, the opposition activists asked to participate in that movie refused, saying that they have absolutely no knowledge about any underground activities of Jarosław Kaczyński (although my father who himself was a samizdat journalist in the 1980s sometimes jokes that Jarosław Kaczyński was simply the best conspirator ever, acting so deep underground, that even other opposition activists had no clue that he is doing something, perhaps there is something to it). Now the rumours go, that even Kaczyński himself got angry when he heard that TVP is trying to make a hagiographic movie about him, although it is not clear – perhaps he’s angry that the moviemakers were asking the real opposition activists about him.

So I guess we have to settle on the cult of his brother, at least for now. But perhaps it’s also Jarosław that has been celebrated by that new monument to Solidarity unveiled recently by, amongst other, Thikhanouskaya. The monument is constructed from the elements of the Berlin Wall and a world-famous Solidarność logo is cutting through them. The boss of the Solidarność Trade Union, that in recent years forgot its roots and simply became a political sidekick of PiS expressed his anger, saying that the new monument violates their rights, as the Solidarnosć logo is their trademark. But the author of that logo himself was one of the designers of the monument – and he did not create it as a trademark for trade union that tries to spread thinly leftovers of its great history, but as a symbol of a fight for freedom that belongs to everyone – not only the Solidarnosć trade union but not even solely to Poles.

One thing is sure: nobody is going to build a monument to the new bosses of the world-famous Arabian Horse’s Studs that were one of the first institutions to be taken over by PiS after their long-established directors, world-famous experts in the field, were sacked and in just a few years those historic institutions that survived two world wars and communism were completely run down (see more here). One of those new PiS-imposed bosses has now been charged with falsifying documentation, acting to the detriment of the company and putting animal’s health at risk. It’s sad to watch, as those institutions show at a small scale what PiS is doing on a larger scale to the whole country.

And the MP from other parties is not much wiser. A group of mostly right-wing MP’s from parties other than PiS put forward a project to change the law so that the motorboat users could enter the protected areas. According to them, those rules are very cumbersome for the residents of the area and people who would simply like to participate in motorboat sports but can’t do it in a nature reserve. What next, opening mountain paths in Karkonosze or Tatra mountains for the fans of off-road vehicles? Or making the Wawel’s castle walls available for the graffiti artists?

The stupidity of that idea was so shocking, that they were mocked by many people online – and rightly so. But not even closely as mocked, as the MP’s from the extreme right Konfederacja, who avoid answering journalists questions about if they vaccinated themselves against COVID-19. According to them, those questions should not be asked, because vaccination is a very intimate thing. Funny, coming from the guys who feel compelled to discuss women’s right to control their bodies at all time. But if their party colleague, Grzegorz Braun, currently a candidate in the mayoral elections in Rzeszów is any indication of the party line on the matter of vaccines, I think we already know the answer. This proponent of COVID-19 conspiracy theories and an ally of anti-vaxxers who runs for the mayor’s chair on the promise that he’ll make Rzeszów “lock-down-free zone” and will task municipal police with enforcing it has been recently kicked out of the debate organized by one of the radio stations after he offended LGBT community and then calling the minister of health “a trained psychopath”.

But if you missed it, don’t worry. There will be plenty of other interesting content in the media yet. Some said history repeats itself, but on the second run, it’s a parody of the first. We can see it now in the (formerly) public TV station TVP. During communist times, they were broadcasting regular updates on the route of the ships, that were importing oranges from Cuba for Christmas. Last Sunday they published a piece on their website entitled “Moroccan hashish comes to Europy via the new, more safe route”. But what you expect? Back then Edward Gierek, who wanted to give Poles a taste of normality was in power, today one of the most important persons in the country is held by a former junkie Ryszard Terlecki…

This piece was written for Britské Listy
Picture: Silan via Wikipedia (Creative Commons)