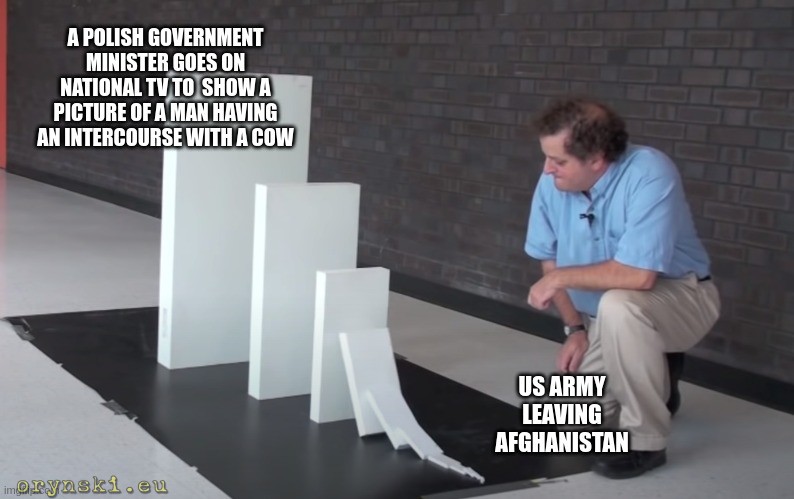 As everyone expected, the whole politics is just a show. Because how else you could explain, that the politicians, who call each others traitors and attack both The Left and Paweł Kukiz for attempting to work with PiS on the important issues, saying that you should not speak to PiS at all (more on that here and here), skip work in the parliament (an important speech by the head of the Supreme Audit Office pointing out the failures of the PiS government) go together and enjoyed their (maskless) party thrown out by Robert Mazurek, a popular political journalist, on his 50th birthday.

The pictures made by the paparazzi show pretty clearly, that the members of Platforma Obywatelska, the leading opposition party go very well with members of the government, compromised ex-PiS politicians such as Adam Hofman or MPs from the Left or from the Kukiz’ party – both of those were accused of being traitors. That also brings the question of if the dramatic interviews carried by Mazurek are genuine, or if that is also staged (the atmosphere sometimes got so heated that guests just end the interview prematurely and leave the studio, Mazurek himself is also known to leave the studio on one occasion).

But maybe it is more to it. Perhaps the fact, that the opposition politicians are cosying to a journalist who should be critical of them emerged now is not a coincidence. You might remember from last week’s piece that leaked e-mails of minister Dworczyk (also present at Mazurek’s birthday) show, that one of the other journalists was in very good relations with the government, providing them with some friendly favours. Could it be that all that scandal with Mazurek’s birthday was arranged to show “there is nothing wrong with that, look, the opposition politicians are also best buddies with prominent journalists”?

As we mentioned Dworczyk’s e-mails, they are apparently real (you can find them on that website). After an invoice from the restaurant with the bill coming to 4320 zł came up in the leaked materials, the PiS spokesman Radosław Fogiel rushed to rescue explaining, that the bill came so high because it was a dinner for a small crowd and posted pictures from that event – thus confirming that the leaked materials are authentic. How is minister Dworczyk – or prime minister Morawiecki, for that matter – still in government after all we learned from all those e-mails is beyond me.

But not only they are still in power, but also they are trying to drag Poland out of the EU. Zbigniew Ziobro, the justice minister makes it clear that Poland is being “blackmailed” after the European funds have been suspended due to discrimination against the LGBT people. His party presented calculations that claim, that Polish membership has incurred nearly a 700 000 000 000 zł loss for our country. Of course, those claims were proven to be utter bollocks, but you don’t have to read all of that to see how bad they are at math. Just look at those numbers and do the maths yourself:

Even assuming the numbers are true (spoiler: they aren’t), is the maths right here? Is the equation 593-981-388-147 = -535 really correct? Of course, if you look closer and read description carefully, you’ll then learn that this is not a simple equation. It is just a bunch of SCARY RED NUMBERS thrown together onto the graphics. It is not expected that you’d read descriptions carefuly and check the math (even I got caught as I haven’t read the description carefuly – hence this later edit of my piece). But it does not matter. Those numbers weren’t provided so we can double-check the maths in that reports. Those numbers are here so they can be painted on a nice, big red bus and scaremonger people into leaving the EU. What could possibly go wrong?

But they have no other choice if they want to continue destroying democracy in Poland, as by now it is quite obvious, that the EU would not allow it. Although, apparently, the actions from the EU came way too late. The Highest Court of Administration has ruled recently that National Judiciary Council had broken procedures when appointing new judges to the Chamber of Extraordinary Control and Public Matters of the High Court. This is the chamber that decides if the elections in Poland were valid or not. That poses a serious issue, as it might mean that any elections that took place since 2018 might not be considered valid.

But if not the EU, then what? The Visegrad group seems to be a dead parrot already – prime minister Morawiecki cancelled his appearance in Budapest because Andrej Babiš was to be there, and he is no longer Morawiecki’s friend after Czech Republic declined to withdraw their lawsuit regarding the open coal mine in Turów. The government is pumping anti-Czech narration and it leaks into the general population. Gazeta Wyborcza reports that in Bogatynia (the town nearest to the Turów mine) an owner of the local pub hung up a poster saying “Czechs not welcome here”. But some don’t believe it’s the wrongdoing of Czechs. Some local people believe that Czechs are just doing what Germans tell them to, which is fuelling anti-German conspiracy theories, and, in turn, weakening support for the Polish EU membership, as the opponents of it see EU as a German-controlled institution set to milk countries like Poland of their riches.

So what should Poland do to avoid paying that hefty fine of 500 000 euro per day? Perhaps they could post some coal from elsewhere to put it into that power plant’s generators? Incidentally, they could do just that. Polish Post just signed a contract with Polish Mining Group to deliver coal to the individual customers by road, surely they could buy a few dozens of thousands of trucks more and supply the Turów electric plant as well?

The problem with our right-wing government – and other right-wingers – is that they don’t care about facts. They have their beliefs and are stuck to them. Like the mayor of Miasteczko Śląskie who, despite the overwhelming evidence that the recent change to traffic law, giving pedestrians priority at zebra crossing significantly reduced the number of accidents, knows better. “Answering to idiotic new laws giving pedestrians priority, we have removed 5 crossings and at the same time increased the number of the parking spaces”. So in Miasteczko Śląskie, pedestrians will now have to carefully enter the road from behind parked cars, instead of taking advantage of the new law on the zebra crossing that used to be there…

And so, no matter what, one thing in Poland is not changing. You need a car to go around. You need to own a car even to take part in European Car Free Day in Poznań, as Poznań made its public transport free but only to those, who can show their car’s registration documents…

I wanted to end my piece with some witty joke, as usual, but I just saw the newest and most despicable piece of government propaganda: a TV clip in which Mariusz Kamiński (the criminal pardoned by president Duda so he could take a post as the chief of special forces) presented a powerpoint presentation with pictures allegedly pulled out of the refugees’ phones, depicting sexual acts with animals or children to show what a risk the refugees pose to Poland. The material bears the headline “He raped a cow, wanted to get to Poland” and can be found here. Mariusz Błaszczak, the defence minister then make a speech saying that if “such people” are “storming Polish borders” then we should not allow them, because they pose a significant risk not only to Poland but to the whole of the EU.

Well, I heard some of the priests are also paedophiles. Perhaps, for our own safety, we should start starving all the clergy in the forest, or at least deport them all to the Vatican?

This piece was written for Britské Listy.
Meme based on a screenshot from Stephen Morris’ video about the domino chain reaction