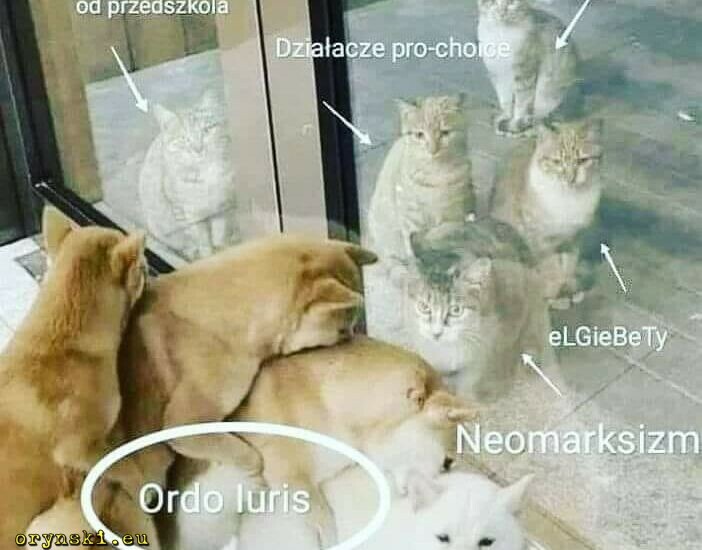 Finally, what was always commonly known, now it’s officially confirmed. Remember when Jarosław Kaczyński was asked about the tax reform “Polski Ład” after expert pointed out, that it will make most Poles worse-off? Back then he said that “Poland needs positive changes but only those who make a living from – pardon my language – slyness will lose”. And now, suddenly, after Polski Ład finally got introduced, the members of the parliament realized that their salaries are lower by 1400 zł.

Apparently losing money on tax reforms is for suckers. All animals are equal, but some are more equal, so just in a few days the MP’s got another payment entitles “tax-free money”. Even PiS MP has no clue what this payment is for, or what are the legal grounds for it. And what the government has to offer for ordinary citizens? Enforcement of the state-controlled prices.

After the government in a desperate attempt to tackle the inflation cut 5% VAT for things like food, the shops are expected to lower their prices by the same amount. The relevant bodies will control it and the shopkeeper might be fined with fines up to 10% of its turnover. The new law orders the shops also to display information about new prices and make it clear to whom the customers should be grateful for their savings. This was actually met with enthusiastic uptake by many shopkeepers, who go much further than the law requires them to, and not only inform about 5% drop in VAT, but also about things like 340% rise in electricity prices, 650% rise in gas prices or how much the prices at their suppliers went up.

Meanwhile, with the lowering of the fuel taxes, the government propaganda can’t stop bragging about how Poland suddenly has the cheapest fuel in the EU (but somehow avoids comparing the price of fuel to wages) and informs how Germans are now coming to Poland to fill their tanks. But of course, TVP won’t tell you about hundreds of Polish haulage companies moving out to Germany due to the fact, that because of the Polski Ład, the aforementioned tax reform, the costs of employing drivers had risen dramatically as well and it is now cheaper to employ workers at German rates than at Polish ones…

It seems that the Polski Ład will be the final nail to the coffin to the Polish economy, as while the trucking companies can easily move abroad (they mostly offer international transport anyway), you can’t expect your local baker to survive if the cost of flour doubled and costs of energy quadrupled for him…

Everyone, even PiS, admits now that Polski Ład turned out to be a disaster, and the government rushes to hastily patch the flawed law, which, I can bet bitcoin against peanuts, will just make things worse. The law is so chaotic, that even the economists can’t make tails nor head of it, but they keep discovering new absurds – like the very complicated system of tax calculation that, without going too much into details, means that Poles now have to pay taxes from their taxes. The Finance minister had been thrown to the wolves, but so far we can’t see anyone willing to take up the vacancy…

Desperate for some successes, the government decided to tighten up the laws banning shops from being open on Sundays – which was vastly circumvented by establishing a post office within shops, so now retailers are looking for different loopholes. One of the supermarket chains announced that they are opening book clubs within their shops. Another outlet in Cieszyn decided to take advantage of its location – the bus stop is located just outside it – and after placing a bench and a timetable inside the shop, it announced the supermarket is a bus station now. But that actually backfired, as they were then fined by the police for selling alcohol, which is illegal at the bus stations.

Seems that the never-ending streak of successes still continues. The prime minister announced he had achieved another success in negotiations regarding Turów mine. The success is as follows: starting from Czechs demanding the construction of some walls and filters to protect underground water sources across the border and pay 30 000 00 zł for the damages already incurred by the mining operations. Thanks to fantastic negotiating skills and diplomatic finesse, Poland is now to build all of that, plus the system to monitor further problems, and pay Czech Republic 45 000 000… Euro. And all that after paying a fine to the European Tribunal for ignoring its ruling, which at the moment of writing reached 70 901 868 euro (the calculator can be found here). Of course, the government claims that Poland won’t pay this fine, but somehow the European Commission did not get that memo and just announced that they will just take that fine from the money Poland is about to receive from the EU.

Even the “intellectual” and ideological base of PiS radicals, the anti-abortion, anti-women right ultra-Catholic think tank with links to the Kremlin is in trouble. A few months there was a schism and some of its members left Ordo Iuris to establish the Logos Institute. The official reason was ideological differences. Now we know more: there was an ideological difference between what they PREACH and what they DO. It had emerged that two of it’s members, Dr Tymoteusz Zych and Karolina Pawłowska had an affair, which resulted in Ms. Pawłowska’s husband smashing the face of dr Zych.

You probably want to stop reading here, as the relationship gossip is now what you signed for when you sat to read my column, but bear with me: I am not usually into looking into people’s private affairs, but this case is specific: the whole basis of the Ordo Iuris existence is to limit other people’s rights to live as they wish. They had an enormous influence onto Polish politics in recent years, fighting with sexual education, European Union anti-discrimination laws, LGBT community, and accusing the left of promoting neo-Marxism. They also played a key role in the recent abortion ban and were on track to ban divorces – here you can see Dr. Zych speaking on why we should “fight the plague of divorces”. And now, those very people who promoted all of that and had the cheek to lecture us on the topic of “how to control one’s lusts” (here) dare to call themselves the victims of hate demand that we won’t look into and judge THEIR private lives?

As one LGBT person pointed out: Karolina Pawłowska (who, as the joke goes, was so pro-life, that she decided to lead double life) “was never called a disease or a wanton, the president or the minister of education is not saying publicly that she’s not a human being, nobody says that kids should not be taught to respect her and nobody prevents her from entering into marriage, as many time as she pleases”… So she’s outraged that she received not even a fraction of the usual treatment the LGBT community gets from her and her Ordo Iuris colleagues.

No wonder this flamboyant demonstration of right-wing hypocrisy resulted in a true torrent of memes. The internet servers were boiling hot from, this is one of my favourites:

Someone also went into trouble and used Ordo Iuris own “research” on the financial aspects of the divorces to the society and economy to calculate that divorces incurred by Pawłowska’s affair with Zych are to cost our country 178 000 zł. And what’s should be our take-away from this story? I would say that yet another time it turned out that the biggest threat to the marriage is not tolerance or LGBT equality, but simply a sexy colleague at work.

But that 178 000 zł will not be the only hit to the Polish economy. The flagship program of PiS in which a fleet of ro-ro ferries was to be constructed in the Polish shipyard is officially dead. The keel to the future ferry, solemnly celebrated years ago by no one else but Morawiecki himself as the beginning of the construction of the first of the new ferries (and which later turned out to be just some random piece of metal that was lying around in the shipyard and was used for that propaganda stunt – see here) just went up for sale. Local scrap yard merchants were asked if they want to buy it at 2 zł per kilo. When the news hist the papers, the shipyard in panic denied they were going to scrap it, and went into some chaotic explanations, how they were checking their options after changing the concept of the proposed ferries, but decided that they will finally use it in the construction of the other vessel, but the experts laughed at this, pointing out, that if you are about to build a ship, you can’t just insert random pieces of scrap metal into key parts of its hull. And, apart from everything else, the first of the promised ferries was supposed to sail across the Baltic sea two years ago…

The COVID struggle is also not going well. Poland suffers from very high infection and death rates, and yet the government totally abdicated. It is only marking activity by proposing some absurd anti-covid measure that even their own MP’s refused to back: the bill nicknamed “lex-informer” proposed that people would be forced to get vaccinations or regular testing by the fact, that if their co-workers were to be infected in coronavirus, they could sue their anti-vaxxer colleagues for damages. That of course enraged the anti-vaxxers and one of their leaders issued death threats to the members of the parliament, for which he was arrested (again). But even the rules that are already in place aren’t considered seriously by the state, as we learned from the case of a priest who was arrested for selling fake covid passports, but was then released as “due to the fact, that the state abdicated from enforcing them anyway, there was no public harm done”.

Meanwhile, some reporters got hands on the vaccine register and found out that many of the leading figures from PiS have not been vaccinated (regardless of the fact if they are openly anti-vaccine, or they encourage others to get a jab), but, in yet another example of the right-wing hypocrisy, some of those who discourage others from getting vaccines, spreading fake news about vaccines being medical experiments, have vaccinated themselves – same goes for several of leading anti-vaccine theories propagators from extreme right-wing Konfederacja.

But there is some positive news: if you wanted to hold Paweł Kukiz to his words – in 2015 he said “if I ever become a politician, spit in my face and call me scum” – there is no doubt you already can. In yet another eavesdropping affair one of his colleagues published a recording of his conversations with Kukiz describes his dealings with Kaczyński. Despite knowing that the chairman of PiS controls everything – from the local police to the Constitutional tribunal, he tries to force him to realize his electoral postulates of changing the election system. “The Kaczyński rule relies on three votes of my MP’s” – says Kukiz – “why would he not change the election system, if he doesn’t need it anymore anyway, he can perfectly rule in this authoritarian system as it is?” – asks Kukiz. Other fragments of those recordings leave no doubt: he is already a fully-fledged politician, perfectly capable to operate in the system created by Kaczyński.

Paweł Kukiz you are a scum!

This piece was written for Britské Listy
Meme author: unknown