I’m back from Poland. I spend about two weeks there. I decided to check for myself if the hatred against LGBT community is really as bad as the media show it. To do that I obtained an LGBT coloured VISA card and used it as my major method of payment. It was not that bad. Apart from some disgusted glances and cashiers murmuring something to themselves I was only once called a fucking fag…

I was talking about that with my friends when we left one of the restaurants in Wrocław’s old city. We passed a small LGBT flag somebody sticked into a flower planter and then reached main square. Here a big rainbow flag was hanging between two of the flagpoles in front of mayor’s office.

– “See, it’s not that bad as you guys abroad think” – my friend said to me. – “At least Wrocław is still quite an open-minded place”. 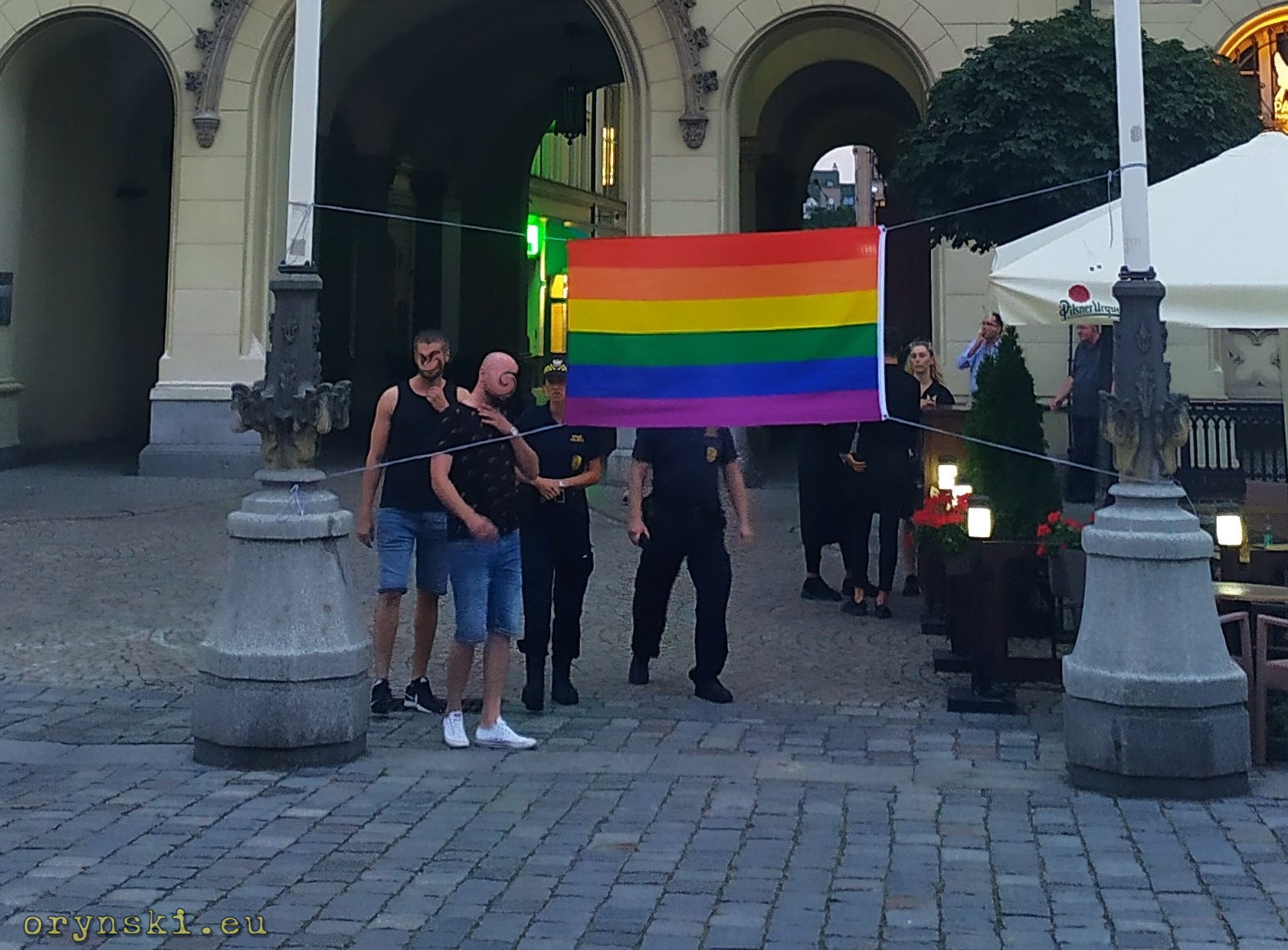 At this very moment two officers of the municipal police emerged from the building behind. They were escorting two gentlemen who demanded for the LGBT flag to be removed. They soon began removing it, while the officers made sure nobody interrupts the process.

Of course we couldn’t just stayed and watch, so we engaged in conversation with female officer. Since the men working on removing the flag were quite adamant, that their concern is with it being an LGBT flag, I reported that other one in the planter 100 metres away. She was not interested.

“It’s not about LGBT flags being offensive” – she said. “It’s that the placement of it is dangerous, someone can trip over it”.

“How anybody can trip over it” – exclaimed my friend – “if it’s so high, I am not a smallest man and I can easily walk under it”.

“But if you were riding a tall bicycle you could hurt yourself”.

I toyed in my mind with a picture of my friend riding a penny farthing and decided against it. He’s not hipster enough. I wanted to ask about all those figurines of dwarves scattered across the city – I tripped over few of them over the years, those are surely a genuine safety concern, but by this time two men finished removed the flag and gave it to the officer. “Is that flag yours?” she asked me. “No, it’s not” – I answered – “But I will be happy to take it if you want to get rid of it”.

“Yeah, right, best thing you wear it, you bloody fag” commented a man standing behind us and swiftly went away when my friend turned towards him with his mobile camera on. 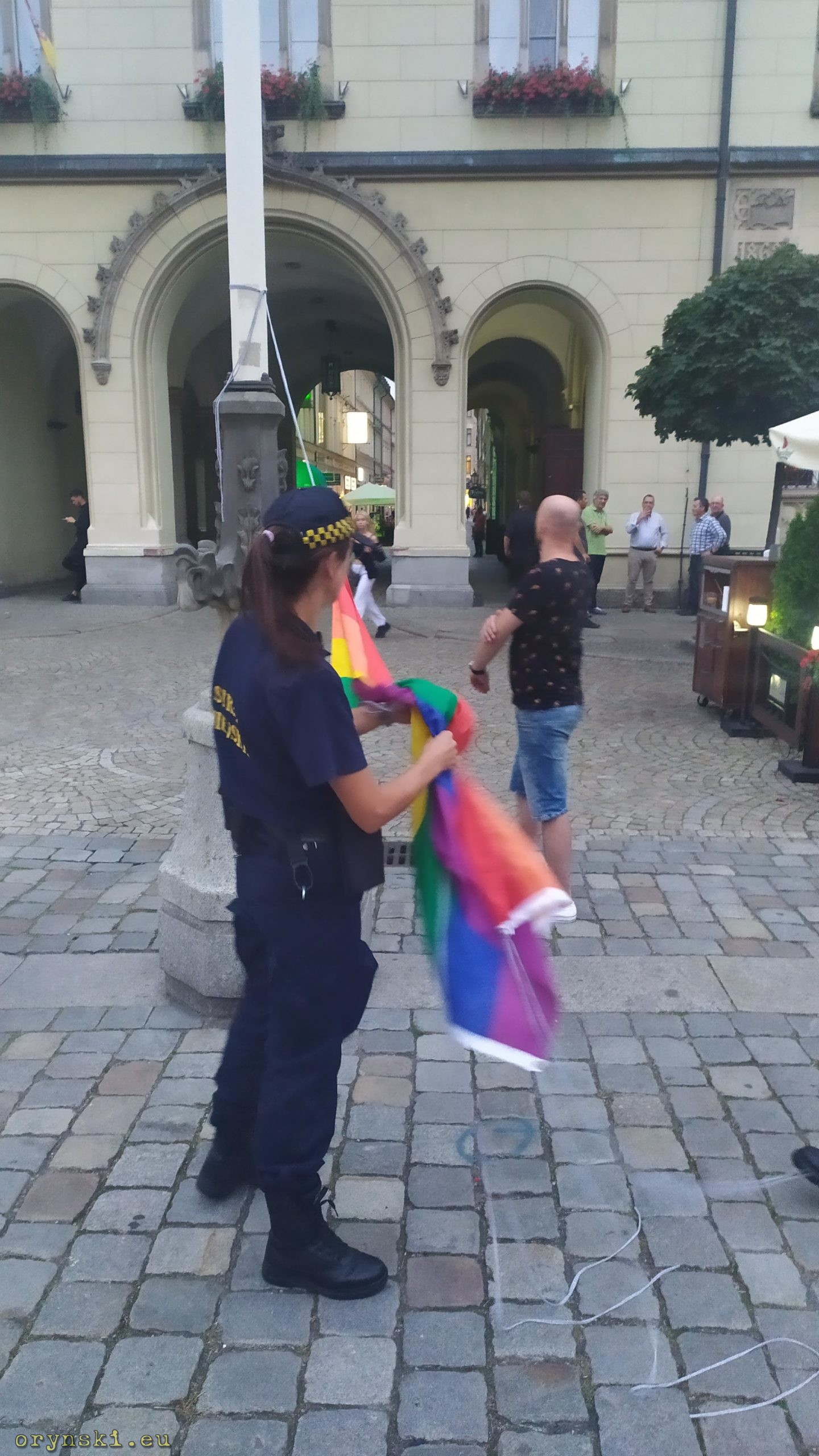 “If it was the safety concern, what about we hang it properly on the mast?” – I proposed. There are four masts and only three of them were in use – with the flags of Poland, the EU and Wrocław.

“You can’t hang flags if you do not own the mast” said the male officer and they left us, carrying the flag with them. Apparently if you own, you cannot as well, as despite petition signed by several hundreds of people the president of Wrocław refused to do so.

And so, another point for LGBT haters. And so far it seems they are doing better than ever. The hateful vans spreading misinformation connecting homosexuality with paedophilia are now spreading from Warsaw to other cities. They often travel with police escort:

and people trying to block their route are being removed by the police with the use of force:

Meanwhile the transgender activist unlawfully arrested for attacking one of those vans has been released from prison. She instantly posted a picture of herself sticking a middle finger to the country, which sparkled outrage, also amongst LGBT rights supporters, who say that LGBT activists should remain polite, cultured and meek if they want to achieve something. Those people apparently still don’t understand: LGBT community has been polite and meek for long. All it got for that was just more abuse. They are not going to be meek any more…

And the fight is going to be tough. The state support anti-LGBT activists in many ways. The education minister defended education official who claims that “LGBT virus is much more dangerous than coronavirus, because it dehumanised society, young people, take away their value”. According to this man LGBT is a “dictatorship of people who are in a clear minority and impose their ideology, which is a mutation of Marxism”. Government minister of equality seems to be of the same opinion: “we live in times where minority tries to force its laws over majority” – she said. First the communist prosecutor as a Constitutional Tribunal judge, now her… Is PiS choosing people for their jobs ironically?

Meanwhile Zbigniew Ziobro, minister of justice and prosecutor general calls for delegalization of the Reformed Catholic Church. That small religious group is probably the only church in Poland that blesses homosexual marriages in Poland. There is also Ecumenical Catholic Church, but unlike the former, the latter is not officially recognized by the Polish state. And after its bishop celebrated a mass during Pride March last year and now has to answer for “offending religious feelings” it’s unlikely for this one to gain place on the official register. Of course, the law says that faithful just have to jump some bureaucratic hoops and the registration should be the formality, but the example of the Church of the Flying Spaghetti Monster that has been denied official recognition after a (Catholic!) experts deemed that Pastafarian faith is not true proves, that in Poland it’s not the law that decides who can be an official religion and who cannot.

But His Noodliness is last year’s news. Today, the main enemy are gay people. The craze is so big, that a man vandalized a promotional stand encouraging residents of Wrocław to change their stove. All because he read “ZMIEŃ PIEC” – “change your stove” as “ZMIEŃ PŁEĆ” – “change your gender”. In Legnickie Pole local right wing councillor demand for the local kindergarten to change its name. He proposes that a “Rainbow corner” becomes “Fairy Tale Corner” so there is no promotion of LGBT. I dread to think how he feels when sun comes just after the rain…

But it was the bishops who really made the fuzz. An episcopate just issued a 27 page text in which he denies basic facts regarding LGBT and homosexuality, calling it “clearly contrary to human nature” and call for creations of “clinics to help people who want to regain their natural sexual orientation”. That is, they propose to establish clinic of “conversion therapy” – a compromised pseudo-science method considered by many to be a form of torture. This has been criticised by a theologist Stanisław Obirek – formerly a priest and now a happy husband. Which proves, that if “behaviours contrary to human nature” – such as celibacy of a Catholic priests – can be cured, they can be cured without any special clinic, simply by opening one’s eyes to reason. So there is still hope. For the bishops.

But of course LGBT is not the only topic in Poland nowadays. After all, we have celebrated a hundred years of the victory over Bolshevik army in the Battle of Warsaw. This battle, considered, not only by Polish historian, to be one of the few that shaped Europe’s geopolitics, was supposed to be celebrated on unprecedented scale. But with PiS it ended as usual. There were some concerts, laying flowers and the holy mass. Due to COVID-19 there was no military parade, but some fighter jets flew over Warsaw. And if anyone has any doubts who won that battle, often called to be “A miracle over Vistula river”, a gigantic figure of the Holy Mary crushing some arrows in her hands (was she fighting Bolsheviks or Winnetou?) has been constructed. You really need to see it: click here.

If Holy Mary is to protect Poland, then she’s doing a shitty job. The government still struggles to keep pandemic under control. The care homes and hospitals are desperate for stuff – so much that nuns who run a Care home in Nowy Sącz appealed to “corona-skeptics” to volunteer to help, as since they don’t believe in the virus, they won’t have to provide face masks and other PPI to them. And we know that thanks to the effort of a 18-years old boy and a group of online volunteers who construct the best statistical overview of the situation, as the government institutions are completely unprepared to do so. Even the health minister Łukasz Szumowski had enough and ditched his job (and then quickly went for holidays in Spain, against his own advice). He complained that he was so tired when coming home that he only had time to watch some silly movies on YouTube. So just like vast majority of working class people and thousands of others from various professions. Except that everyone else cannot afford to go yachting on Canary Islands after ditching their (if we believe the politicians) severely underpaid jobs… Could it be then that his dimission is related to all those coexisting financial swindles he was allegedly involved with?

Maybe he hoped that they will cancel all flights and he will have to stay there. Although the situation is fluid: after the government issued the official list of the countries from which the flights to Poland will not be permitted, it had quickly amend it. Partially because they got the official name of the Swaziland wrong (it’s now called Eswatini), partially because Andorra was placed on that list despite not having a single airport…

Szumowski was not the only member of the government who jumped ship. Apart from two deputy ministers we witnessed resignation of Jacek Czaputowicz, minister of the foreign affairs. And right in the middle of the crisis in Belarus. Has he also realized that he is not up to the job?

Meanwhile the annual festival of the Polish song in Opole is going to take place next week. One of the main attractions will be the concert entitled “Cisza jak ta” – a tribute to the late Romuald Lipko, leader of one of the most important Polish rock bands ever – Budka Suflera. There will be stars galore, but the band Budka Suflera has not been invited. Could it be because they dared to protest when one of the PiS politicians, who illegally used their songs during his electoral campaign?

This piece was published in Britské Listy