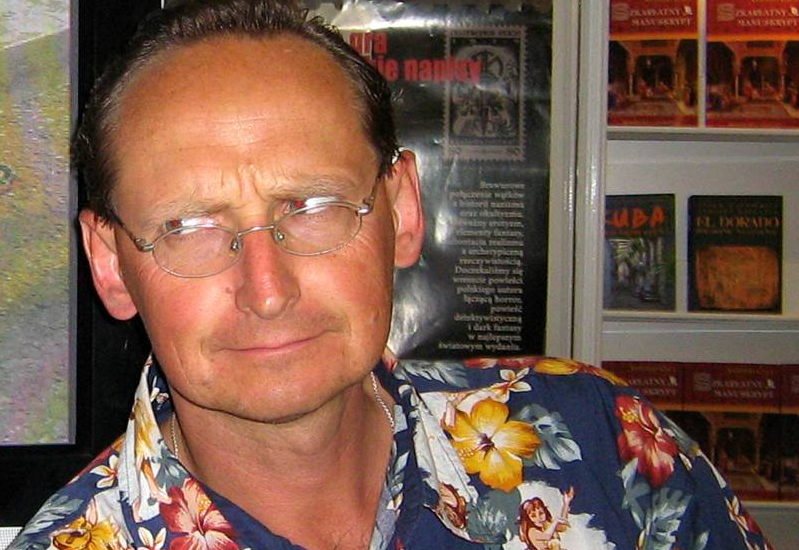 Poland never had any real colonies. Not in the Western understanding at least, as all we had was just a couple of small trading outpost, that we managed to hold on to for a few years (one in today’s Gambia, one in today’s Trinidad and Tobago). The Polish-Lithuanian Commonwealth during its golden age was too busy conquering the areas east from its borders – one might say, that once Poland was stretching from Baltic to Black Sea. This is probably why during the golden era of colonialism we haven’t really had famous travellers – those celebrated today as famous Polish travellers like Maurycy Beniowski or Ignacy Domeyko were, in fact, refugees. They were forced to flee Poland after taking part in the struggle against forces occupying Poland in XIX century.

In XX century not much had changed, as with the notable exception of Tony Halik (who remained in the west after the WW2 and started his career as a documentary filmmaker there), not many people in communist Poland were able to travel abroad. No wonder, that when Poland regained its freedom in 1989, people were hungry for stories from the land far away, and so the institution of the Celebrity travellers was born. The problem is, that while they are supposed to explain the world to the Poles, the most known three of them seem to be very well disconnected from the reality themselves.

First of the three most popular travelling celebrites Beata Pawlikowska is mostly known for spreading quack medicine and new age beliefs. Martyna Wojciechowska recently hit the news after saying, that she does not understand why young people nowadays when seeking for the job, put money first, instead of seeking the work. According to her, the salary is not important, people should first ask the question “why?”. She said, that she sometimes is not paid for some of her projects. That is not the shock to anyone, as being one of the best paid Polish celebrities, and former girlfriend of the richest Pole, she can afford to travel the world without being paid for it. The thing is that she apparently can’t understand, that others cannot afford such a luxury, as it had emerged some time ago, when one of the known Polish academic disclosed, that editors of one of Wojciechowska’s programs requested some expert consultations, but refused to pay for the service, or even give credits. Wojciechowska was really surprised to find, that the expert failed to find the answer to a question “why? (should I work for free for one of the richest women in Poland)”.

But the biggest nutjob in the world of the Polish travelling celebrities is Wojciech Cejrowski. He made his name by mass producing travelling reportages from all over the world, in which he mocked local cultures and religions or tried to pose as a colonialist white man from the long-gone era. I remember one of his programs, that literary consisted of him lying in the hammock while the bunch of black people were dancing around him, building a camp and preparing a meal, while he ranted about how stupid people are paying for expensive all-inclusive holidays, while for much smaller money you can hire some poor guys to dance around you for a whole day.

Incidentally, Wojciech Cejrowski is also one of the idols of the right, thanks to his programs that gradually evolved from travelling documentaries into one-man-shows, in which he smugly spreads his ultra-conservative views and turbo-Catholicism (the fact, that he is a former husband of aforementioned Beata Pawlikowska somehow does not goes in the way here, especially that he refuses to comment on the subject). Cejrowski has been known for his radical views for a long time – on one occasion he postulated that all Catholic priests should be given immunity, Britske Listy readers might remember him as a guy who said we should give Szczecin back to Germans, he is also a great fan of Donald Trump. Recently though, his colleagues got fed up with him. Over 160 of Polish travellers and journalists have written an open letter to him, where they ask him to show more respect to others and to different cultures. They point out, that traveller and journalist have an important role to explain the world to the rest of the nation, and they ask him to stop spreading his backwards views and ideas and start to respect people about whom he speaks in his shows.

The problem is that the letter, while right, is completely pointless. First, there is no use in trying to reason with a man like Cejrowski, who is so full of himself. But it is also well too late, Cejrowski pours his views into the minds of Poles not only in his travelling programs but also as a regular guest in the current affairs programs broadcasted in prime time by PiS controlled TVP. There, he is simply allowed to rant as much as he pleases as long, as his views support the current narration of the Polish right. Recently, for example, he praised a woman who slapped an anti-government protester in her face, calling it “a beautiful, honourable gesture”:

The host, of course, did not . While would it? His station also takes part in the process of dehumanisation of the victim, they even produced an animated short, suggesting that she is just a machine manufactured by Jews, disgraced former leader of the opposition movement Mateusz Kijowski and Lech Wałęsa, constantly portrayed by the government media as communist agent:

I doubt there is any chance that this open letter is going to change anything. Cejrowski’s enjoys the revival of his career, as when Poles became richer and able to travel themselves, they were able to see the world without it being filtered by and realised how outdated are his views. In a result, Cejrowski programs were gradually pushed into the more niche radio and TV channels – meanwhile TVP offered him a weekly prime-time spot and treats him like some kind of expert commenter of the current affairs.

As per the case of the attacked protester, Cejrowski is just one of the many supporters of the current government who praises the actions of the attacker, who turned to be employed by Lower Silesia . Pro-government Gazeta Polska had put her on the first page of local edition with the title “I acted as one should” – which is a quote from a resistance fighter created by the Polish right to be a new Polish hero:

After the she resigned from her post (but not from the other functions she holds), but I don’t doubt, that she will soon be rewarded with some another sinecure. After all, it’s not like she is getting to be prosecuted, right? The prosecutors just dropped the case of another women protesters, who were attacked while trying to block neo-Nazis marching in the Independence march last year. They were beaten, kicked, abused and spat on, and now they received an official letter, in which the prosecutors , that the intention of the attackers was merely to express their unhappiness with the victims obstructing the path of the march. Perhaps quantum psychology from chapter had something to do with it, as according to the prosecutors, the blows were not intentional, and yet at the same time “aimed at less critical parts of the body” – this is a first known case of a Schroedinger blows that are intentional and not at the same time! But even if the attackers really wanted to harm the protesters, there was no harm to the wider society, and therefore it is in no interest of the state to take the matter further. It’s quite interesting that the prosecutors were able to obtain all those information without interviewing any of the attackers.

But right-wing extremists aren’t the only one who can count on the government’ protection. normal people can get scot-free from the trouble, as long as the victim is something that does not matter. Recently a court in Środa Wielkopolska conditionally dropped the case of an entrepreneur accused of causing a severe harm to one of his employees. In the famous case, a Ukrainian woman employed illegally in the food processing plant, got a stroke while resting in employees accommodation. Her roommate asked the businessman to call for help, but instead, he had put her in the car, drove her to a bus stop, and then called the emergency services telling, that he found a drunk woman there. 10 months later she is still in the hospital, and if she is ever to regain full fitness, she will need many more months, if not years, of specialist rehabilitation.

Meanwhile, the court only ordered the man to pay her some small compensation, arguing that while his actions caused a significant delay in getting a critical medical help, it was understandable that he panicked, as he didn’t want to be exposed as employing illegal migrants. And, after all, those other Ukrainians are not toddlers, they could call the ambulance themselves. Also, the accused despite young age runs a successful business. Do I understand it correctly, that it is now official, that if you are a successful businessman, you can treat other people like shit in Poland?

If something like that would happen to a Polish migrant in Britain or Germany, Poles will be up in arms about it, rightly saying, that such thing should be impossible in civilised Europe. But this is not the first time when Poland proves, that we are no longer interested in adhering to European standards. If the president Andrzej Duda himself calls European Union “and imaginary community, that gives us nothing”, leading TVP’s expert, aforementioned Wojciech Cejrowski calls it “Soviet scum he hates” and one of the most prominent PiS MP, Krystyna Pawłowicz asked if she regrets calling European Flag “a rag” responds that the whole EU is a rag for her, then it becomes pretty clear, that PiS is preparing Poland for leaving the EU. Of course, they would not admit it openly yet – Poland is getting too much of those “imaginary” founds, and the majority of Poles are still strongly pro-EU, but the process of accustoming Poles to that narration had already begun.

Over last few years I’ve noticed similar shift that led to the recent developments in Britain: the dominating narration changed from us being part of Europe, to us being in opposition to those European “them”. In the UK just a few years of bashing people with that narration by the right-wing media ended in Brexit. Poland is already in conflict with the rest of the EU over PiS trying to overthrow the rule of law and change Poland in the para- state similar to Russia, so it might end with that we will be de facto kicked out from the European club quicker, than Britain manages to leave on its own…

If someone came to me 5 years ago, when I was a proud European studying at the leading British university with the people from all over the continent, enjoying all the benefits of European Union and looking forward to the bright future, and told me that Britain is going to shoot itself in the feet, while Poland will plunge into becoming a -style state, I would never believe in it. How on Earth to get here? Anne Applebaum offers a great analysis of the situation in the current issue of The Atlantic, and I have to admit that her diagnosis is really convincing. But the worrying bit is that if we believe her, then it is only a beginning of things to come.

This piece was written for Britske Listy
Picture of Wojciech Cejrowski: Sławek (via Flickr), CC 2.0