For a few days Polish internet had been flooded with fake screen grabs from TVP’s flagship information program “Wiadomości”. This was yet another instance of PiS learning in a hard way about the power of internet and how “Streisand effect” works. See, public television in Poland have always been politicized, and accusation of it being biased towards the ruling government are nothing new. But as regular readers of this series might remember, PiS does not even pretends that they want the public broadcaster to be impartial and turned it into primitive propaganda tool. The flagship information program could be at times easily compared with state TV of North Korea: sassy propaganda is interrupted with commentaries of pro-goverment publicists and, very rarely, tendentiously selected snippets of the opposition. The news tickers, or stripes (“paski”) as they are called in Poland become essence of the PiS propaganda, as after condensing the message into approx 90 letter long sentences, the absurdity became even more visible.

No wonder, that internet users wanted to parody it, and developed a tool allowing everyone to make their own TVP stripes. Let me have a go at it: 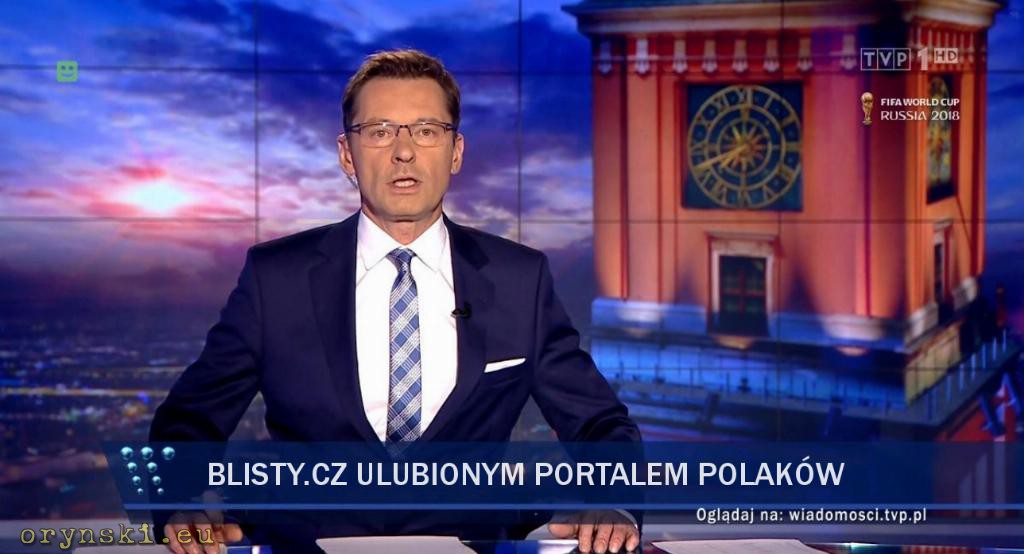 This annoyed TVP, and they announced that they are taking legal steps against creators of that tool, claiming that this is an infringement of its intellectual property (which is very weak stand, as they would have to prove that this is not a parody). In effect, similar websites allowing internet users to create fake “Wiadomości” screen grabs popped all over the internet like daffodils in spring, and for a few days everyone and his uncle was making their own stripes. But this internet meme proved to have unusually short life, as everyone get bored with their new toy after a day or two for one very simple reason: the original TVP stripes, collected, amongst others, by this Facebook profile, are so silly and stupid, that no matter how hard you try, you won’t make any better.

And anyway, there is no time for laughs. With PiS being on the last stretch to finally dismantle democracy in Poland, people seem to give up. Protests are no longer as numerous as they were last summer, still, PiS is prepared for the worst. The streets around the parliament are fenced out and patrolled by the police officers dragged there from all across the country. Hundreds of police vans on the street and water cannons awaiting in readiness in the side roads is a view that most of the people haven’t seen on Polish streets since 1980’s. The atmosphere is tense: police accuses protesters of attacking the officers. But we don’t live in 1980’s any more: today, everyone has mobile phone with him, and the footage can prove them to be lying. For example on the video below one can see the protester holding a megaphone. The device is pushed by the police officer so it hits his colleague in the face. The protester is then dragged across the barriers by several policemen, brutally detained and charged with assaulting the police officer.

Later the police dragged also his colleague from the crowds, he was taken inside the parliament building and disapeared for several hours. In the early morning he was found badly beaten in one of the hospitals, still guarded by the police officers.

Incidentally those who are being framed into assaulting the police happen to be leaders of the protests. Just like Solidarity legend Władysław Frasyniuk that has been accused of pushing the policeman during last year’s protests – PiS has even posted footage of this event on Twitter, but it can be clearly seen that Frasyniuk is being pushed from behind by a bald man in sunglasses with a comm earpiece (plain clothed officer?):

The policemen themselves seems to be not happy with their new duties. According to Newsweek over 200 officers called in sick to avoid being send to fight the protesters outside Sejm. There was also a strange issue of the police officers not wearing their numbers and name badges and refusing to identify themselves. The police spokesperson tries to argue that they don’t have to wear it, pointing to the ordinance that makes it an exception for the police officers operating in formation, but the law on uniforms clearly states that they have to wear it at all time. But it would be not the first time when PiS places less important legal act over more important one to suit their needs, would it? And this does help to calm the things down as lack of the identification makes the questions asked by some commentators a bit less crazy: some of them suggested, that those weren’t really police officers, but volunteers from Macierewicz’s volunteer territorial army dressed as ones. Surely even if that claim is ridiculous, it would be easier for the governement to deny it if the police officers did not tried to remain anonymous?

Anyway, even if the police officers are not directly involved with fighting with the protesters, I don’t blame them for being ashamed that they have to take part in that circus. The whole idea of cordoning Warsaw’s city centre streets surrounding the parliament buildings is just silly, and it is executed in even more ridiculous way. For example certain officers were placed on one of the surrounding streets and tasked with stopping pedestrians walking towards Sejm. Vehicular traffic or pedestrians walking in the opposite direction was allowed to pass without a problem. This man happened to live nearby, but even he was not allowed to pass. He is advised that he can walk back to the previous bus stop and take a bus, that would drop him off 50 metres behind the police cordon, from where he would be able to continue walking in his chosen direction. The discussion took some time, finally he borrowed a bicycle from someone, rode it for 10 metres and then passed it to another pedestrian going opposite way who returned it to its owner. Do you need any more reasons why I call this series “meanwhile in Cuckooland”?

PiS still claims to have a overwhelming support of Poles, but it becomes more and more clear, that their attempt to build a new founding myth of the state around Lech Kaczyński fails. After People’s Army street has been “de-communised” and renamed after him despite widespread opposition and the fact, that the street has been commonly called “Trasa Łazienkowska” anyway, the whole housing estate officially changed its address, so the three tower blocks are now officially located at the orthogonal Polna street.

Meanwhile government is not neglecting it’s days job, which only further proves PiS’ incompetence in almost every field. Ministry of health for example tried to save money on vaccines and bought the cheaper version. Later they found, that those cannot be used as another dose in kids, who were already had the first round of the vaccination with the better kind, so the newly bought ones, worth 443 491,20 zł, had to be utilized.

Last week deputy minister of enterprise and technology proved absolute lack of knowledge of the safety procedures when he twitted picture of his air ticket and travel documents. The internet security portal zaufaniatrzeciastrona.pl pointed out that the picture contained enough data for anyone to be able to cancel his journey.

But of course there are also good news. In response of Sweden’s call for help, Polish fire service send 139 firemen and 44 fire trucks to help tackle the raging forest fires there. This is a great help, as the detachment of Polish firemen is completely self-sufficient – they have their own food and tent town with them, and the Polish ferry company Unity Line transported the fire trucks and their crews for free, which would otherwise cost 75 000 zł. The convoy has been welcomed by crowds of Swedes all along their route from the ferry terminal to their battlefront in the interior:

This made much more to promote Poland in Europe that any actions of the PiS sponsored National Foundation that enjoys a budget of 220 000 000 zł. Of course PiS still tried to spin it their way, so one of it’s MP’s, Dominik Tarczyński pointed out to the Swedish media that they receive help of the Polish firefighters despite the fact, that Swedish government criticizes Poland for raise of the neo-fascist movements and attack of the democracy. “We don’t help Swedish government, we help Swedish people” he said.

Still, even if this great response of the Polish fire brigades is just PiS’s PR stunt, it won’t work. Because, mr Tarczyński, it’s not you or PiS who help to tackle Swedish forest fires: it’s the people of Poland. Poles don’t care about the politics in that context and their overwhelmingly support work of the Polish firefighters across the Baltic sea. The pro-EU Poles are happy to see example of how fantastic European cooperation is, as what Tarczyński forgot to mention is that this action is part of the European System of Crisis Response. Others are surprised to find that Poland haven’t picked their best trucks to send, but that this is actually a regular equipment of the Polish fire brigades, again in a big part thanks to EU funds. Nationalists, on the other hand, are proud of Polish firemen spreading Polish glory across the nations, and religious are praying to St Florian, patron of the firefighters, to keep them safe when they battle raging fires.

Unless he is out of the job already, as apparently there have been some changes recently. The participants in the competition of voluntary fire brigades in Strzelce Opolskie were surprised to find, that medals they received are different than in previous years. Usually they bear generic pictures of the firemen, sometimes they have saint Florian on them, but this time they have been rewarded with the chubby, moustached face of the local councillor responsible for crisis response and cooperation with the military.

But maybe they are making too much fuzz about it? Perhaps we indeed live in the times of “excessive sensitivity”, as said Henryk Kowalczyk, our new Minister of Environment, when he was explaining to his voters, that while Poland cannot remove endangered species from the list of protected animals, as this would annoy European Union, he strongly encourages his subordinates to grant hunters exceptions, so they still can hunt them quietly? PiS media is already spreading panic about protected species causing financial losses to farmers or even endangering humans, so the hunters have pretext to shoot. Similarly, the Minister of Agriculture suggests, that recent pig disease might be a result of deliberate actions of the “enemies of Poland”. Recent picture of the wild boar suspended high in the trees fuelled this conspiracy theory.

In 1950, the Stalinist government of Poland accused US imperialists of dropping potato beetle (Mandolinka bramborowa) on Poland in order to destroy Polish crops and stop the communist revolution. I would not be surprise to hear, that TVP informed, that some enemies of Poland are dropping infected wild boars in our forrest in order to stop changes introduced to Poland by PiS. Because when it comes to TVP, anything is possible. 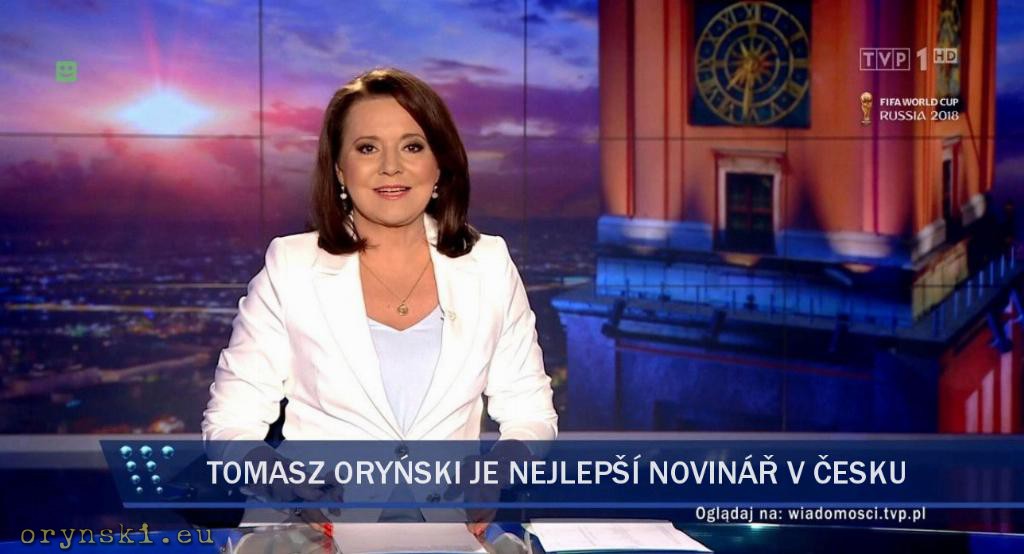 This piece was written for Britske Listy
Fake screen grabs from Wiadomości TVP generated using one of the parody sites.
Picture of the fire engine: public domain