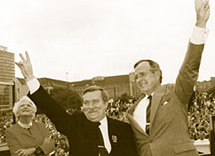 When Lech Wałęsa, shouted “Pomożemya” together with other workers during the meetings with the Party First Secretary Edward Gierek in 1971, he really hoped that the Party would use his help and try to learn from its mistakes. “And what did Gierek do with our help?” he would ask later.1 Mistakes made by the government combined with the international situation led to economic crisis.

In 1976 desperate attempts to patch the problem by overnight price rise (some products, such as meat, were priced 69% more) led to unrest2. The Government answered with repressions towards the worker’s leaders but this time they were not left alone. Unlike in 1970’s, there was a connection between workers and intellectuals: the Worker’s Defense Committee (KOR)3 “Without this bridge Solidarity would have developed, if at all, very differently”4. KOR not only provided legal help to repressed workers but also encouraged other activities. As for the advice allegedly given by Jacek Kuroń “Don’t burn the committees, create your own ones”5, many organisations were created, resulting in raising political awareness amongst all levels of society. Opposition was putting strong pressure on education and information. The Society for Educational Courses (Towarzystwo Kursów Naukowych, TKN) was created and despite gangster-like repressions from the Security Service (SBb) only between February and May 1978 it gave over 120 lectures in private houses to students6. There was also a rise in a number of Samizdat issues, for example in 1977 SB managed to take over 1662 pages of the underground publications and only two years later 300 000 pages.7 Another important factor was that cardinal Karol Wojtyła got elected the Pope. His calls for “moral order” have prompted unexpected wave of activity. “People feel obligation to mark their participation in this movement of moral reconstruction. Everyone wants to show it somehow – in their workplace, in institutions, in art, in personal life” – recalls Lech Wałęsa. – “They were bursting with energy, full of ideas, zest and initiatives”8. No wonder that part of this energy turned to change the government.

This was the atmosphere in Poland at the beginning of the 1980’s decade. Therefore when the prices of meat plummeted overnight by sometimes more than 100%9, the strikes burst all over the country. By August Poland was practically brought to a halt. Over 1100 factories have participated in the strike, the disruption in transport and other service was also severe and the newer and newer state owned companies were joining the strikes. But the scale of the strikes was not the only novelty. This time intelligents from KOR offered strikers financial support, served as contact centre for the various strike committees and contacted them with experts10. The central point of the events seemed to be the Gdańsk Shipyard, a home to Inter-Enterprise Strike Committee (MKS)c. Lech Wałęsa, sacked from work in 1976 for involvement in worker’s movement11, became its leader12. Talks between the strikes and the government led to the Gdańsk Agreement, in which government agreed to 21 postulates, such as establishing Independent Trade Unions, rights to strike, limitations to censorship, return to work of repressed participants of 1970 and 1976 strikes and various economical demands13. Lech Wałęsa signing the agreement with his famous gigantic ball pen with a picture of the Polish Pope14 opened up a new chapter in Polish history.

The following 500 days, known as “The Solidarity Carnival”15 was full of hope. “Comparison comes to mind that the Polish past-august society is a poor man who was allowed to be a sub-tenant in a beautiful house. And suddenly it becomes clear, that this house (…) belongs to him. Look (…) how soon and naturally will he turn from repressed, shrunken and unsure of his rights tenant to careful landlord”16. The structures of the Solidarity were organised, the right to strike was exercised by the workers, the relative freedom of press was exercised by the media, leaders of the opposition were travelling the world and having international meetings. The nation was excited about the future, especially that attempted assassination of the Pope and death of Cardinal Wyszyński, leader of the Catholic church and a big authority to Poles turned their heads away from the economical problems the country still experienced. But not everyone was happy in these new circumstances. Hardline wings of the party came as far as to openly undermine Party Leadership, to accuse General Jaruzelski (then the prime minister) of abandoning ideas of Marxism-Leninism in favour of “Finlandisation” of Poland17. The opposite wing of the Polish United Party Union (PZPR)d called for abandoning censorship and for reforms within PZPR18. One of these reforms was liquidation of Katowice Party Forum, a lair of Hardliners, who then began, behind the backs of the Party leadership, unofficial talks with the Soviet Union calling for urgent Soviet military intervention19. Meanwhile the economic problems grew bigger and bigger and relations with the other Eastern Bloc countries became very rigid. They stopped delivering food and raw materials to Poland as “due to political instability it could not be sure that Poland would meet its obligations”20 A popular joke of this time was telling the story of two dogs: first dog was sneaking into Czechoslovakia to eat as much as it can, the other was sneaking from Czechoslovakia to Poland where he could bark as much as it could21. The strikes were spreading around the country. General Jaruzelski was afraid that the situation is at the edge – that one sparkle can lead to “another Budapest or Prague”22 and together with other party leaders they decided that it’s time for the army to take over the power23. He gives main four reasons for the introduction of the Martial Law:

and last, but not least, to avoid outside intervention24.

The hard time was anticipated by the opposition who decided to prepare for the hard times. One of the most spectacular actions was withdrawing of 80 000 000 PLN from the Solidarity bank account by Wrocław activists under the lead of Józef Pinior and depositing it with catholic church for further use by the delegalised organisation25. But overall the Martial Law caused big disruptions: leaders of the opposition movement were isolated and arrested. But many people become engaged in new underground activities from day one. For example as early as 14/12/1981 (day after introduction of the Martial Law) the new samizdat periodical “Wiadomości Bieżące”e was established in Wrocław26. Decision of the remaining Solidarity leaders, the Trade Union became a conspiracy organisation. Two paths were considered: “sudden change” – de facto countrywide uprising, promoted by Jacek Kuroń gave a way to a “long march” approach, a path supported by Adam Michnik27. Solidarity, with strong support of the Church, became engaged in a propaganda work (Samizdat literature and periodicals, political graffiti) and in distributing humanitarian aid from the West, especially to families of those arrested and internated dissidents. Numerous humanitarian aid convoys were not only bringing so desperately needed help, but also smuggling illegal materials such as books, printing machines, accessories, etc.28

As the time was passing by, the PZPR was loosing the ground: the West and the Pope were openly supporting opposition, the Soviet Union was too busy with its own problems to help. The turn against the workers and break of the August Agreements the government lost the rest of its credibility in the nation’s eyes. The peaceful manifestation were crushed by the Army and The Motorized Reserves of the Citizens’ Militia (ZOMO)f, people were killed. The murder of Grzegorz Przemyk, a student activist29 and numerous absurd lies broadcasted by Jerzy Urban, a cynical government spokesperson30 resulted in defecting of the members of the party who did not quit after 13/12/1981 to the other side. The violent approach only made the opposition more zealous – only during 11 months of 1982, 360 illegal printing works were liquidated, over a million copies of samizdat publications were confiscated and 11 pirate radio station were closed31, yet the Solidarity was still fighting – sentenced dissidents were involved in new activities shortly after they were released from prison32.

Gradually the Government realised that a different approach should be applied. The Martial Law was suspended and then finally abolished. Later, in the summer of 1984 most of the political prisoners were released from prison33, but the repressions were still in place: Jerzy Popiełuszko, a chaplain of the resistance movement, was murdered by the SB agents in autumn34. Another amnesty in 1986 happened in different atmosphere – in the Soviet Union Gorbatchev reforms were already under way. Government violence against the opposition was in decline. From the other hand the opposition methods has changed as well. The protests often manifested themselves in new ways, such as “surrealistic socialism” happenings organised by the Orange Alternative movement in 1986-1989 period35. Meanwhile the economic crisis became a burning issue and government realised need for radical reforms, which cannot be done without the support of the opposition. This was the reason why Interior Minister Czesław Kiszczak approached Lech Wałęsa in autumn 198836, what was a first step towards the later Round Table Negotiations. The PZPR was willing to share power in exchange for the support to the economic reforms, but while bargaining for electoral system and the role of the new political institutions they made numerous mistakes mostly caused by an underestimating of the public support for the opposition37 which caused a spectacular defeat in the elections. As a result PZPR fell apart and on 27/1/1990 the historical command “Sztandar wyprowadzić”g ended its era in Polish history38.

In an interview in the mid 1990s Jacek Kuroń said that political plans have to be realised outside the state. He pointed that when the independent democratic structures are created, stronger they are, more power is taken from the government39. Events of the decade proved him right – when the violent revolution is impossible, only the slow process can bring expected results.

36Jacqueline Hayden, “Explaining the Collapse of Communism in

g“The ancient to be marched out!”