Brexit showed even more how much different Scotland is from the rest of Britain. I believed that independence is the best course for Scotland even before, but now I think it is the only way for Scots to save themselves from jumping the cliff with the rest of UK. But I explained it all in my previous piece. What you read is just a quick blog note about how I marched in the independence march last Saturdan in Glasgow and what my impressions were.

This is the second independence march I attended, although last September I just went as a passive observer. I was surprised to see, that while quite big, it was much smaller than I expected:

Last Saturday was different. All signs indicate, that Brexit will end in disaster, Westminster government has no clue how to approach this unexpected blessing (after all, the Tory party never expected such an outcome of the referendum), and many Scots begin to believe, that going on their own might be the only chance to avoid being dragged down by England. Many friends encouraged us to join them on the march, so with my partner and a couple of friends we’ve decided to go.

For a Pole, for whom sadly in the recent years “independence march” is related to the nationalist event, and what we experience in Poland lately is a very bad kind of nationalism: aggressive, inward focused, and in no way inclusive, unless we count including aggressive neo-Nazis and fascist as a part of acceptable part of mainstream phenomenon of patriotism:

The Scottish Independence cannot be further from that. While some people try to convince me, that Scottish nationalists are anti-Polish and anti-immigration, I am so far to meet one: they seem only to exist in the tales spread by Brexiters and Unionists. When we arrived to Kelivingrove Park, we were met by a bunch of smiling and excited people. It was clear, that most of them have rather left wing views – and I don’t say that because there was a group of young men with red flags giving out some Marxist leaflets: 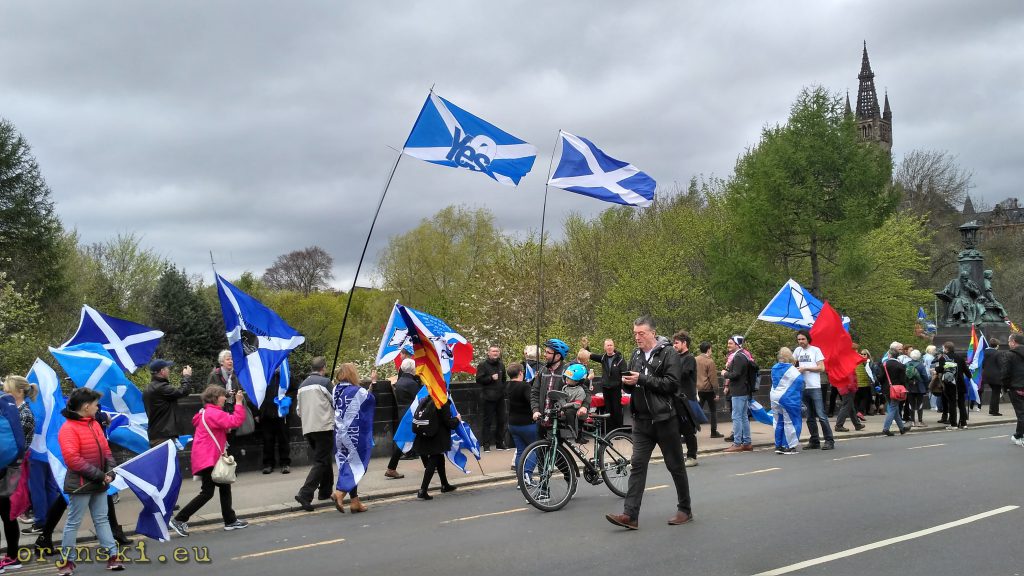 There were some Palestinian flags, and the second most popular colour after blue was yellow, due to omnipresent flags of Catalonia. People were carrying banners demanding freedom for opressed political prisoners across the world, they were calling to stop war in Syria, ban nuclear weapons or pull Scottish soldiers from illegal wars fought by the United Kingdom.

I saw a few Antifa old hands sharing a roll up somewhere on the side, but there was nothing that can be seen on Polish marches: no masked faces, no chants demanding death for anyone, even disdain towards Tory party was expressed in much more polite ways than last time. I think that was the banner that showed most aggression: 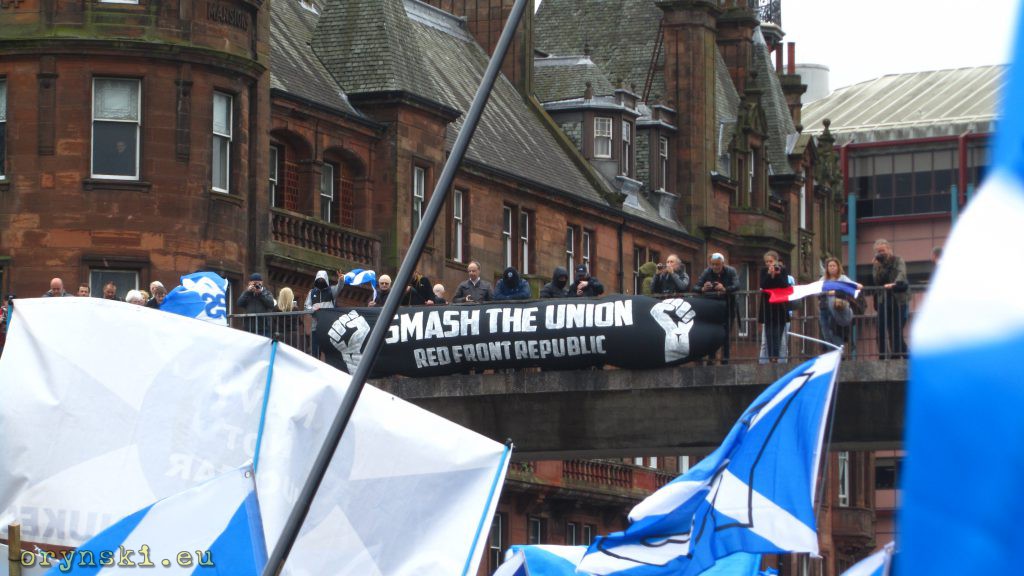 What was also different from last time was numbers: from the beginning it was pretty clear, that there is much more people than last time. I don’t share optimism of some pro-independence activists who quoted numbers as high as 100 000, I think that police estimates, although quite cautious, were not that far off – and if there was 45 000 people present, then surely the fact, that this is nearly three times as much as last time is a great success. Some Polish guy posted a time lapse, that does not show even everyone who marched, not to mention people who came straight to Glasgow Green, and the movie is pretty impressive:

We’ve marched somewhere in the middle. There was a Polish guy carrying too much flags for one person, so I took a Polish flag off him, leaving him to carry the Scottish ones, so you probably can see us somewhere above. He was a part of bigger party of independence activists that came to march through Glasgow from Inverness. Apart from a mini-flag carried by my girlfriend we have not seen any other Polish flags, but we weren’t the only members of the expat community living in Scotland who showed their support for the cause. There were some Czechs: 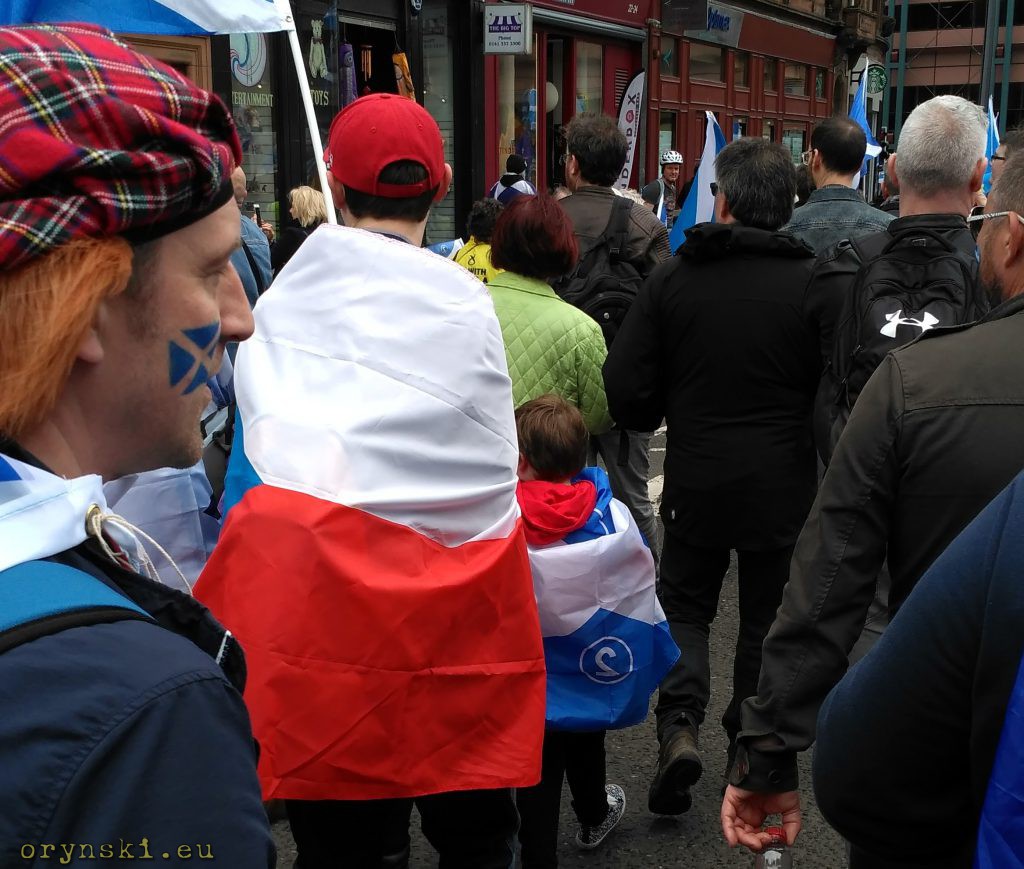 Those Indian guys seemed to be fully immersed in Scottish culture: 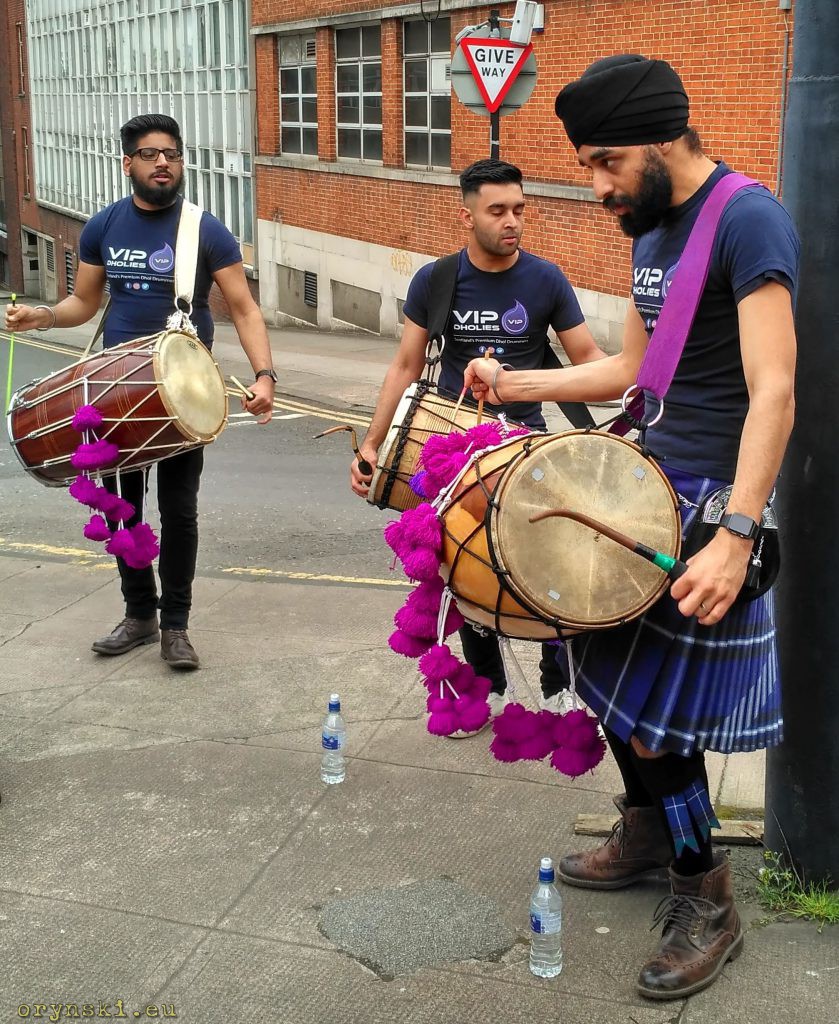 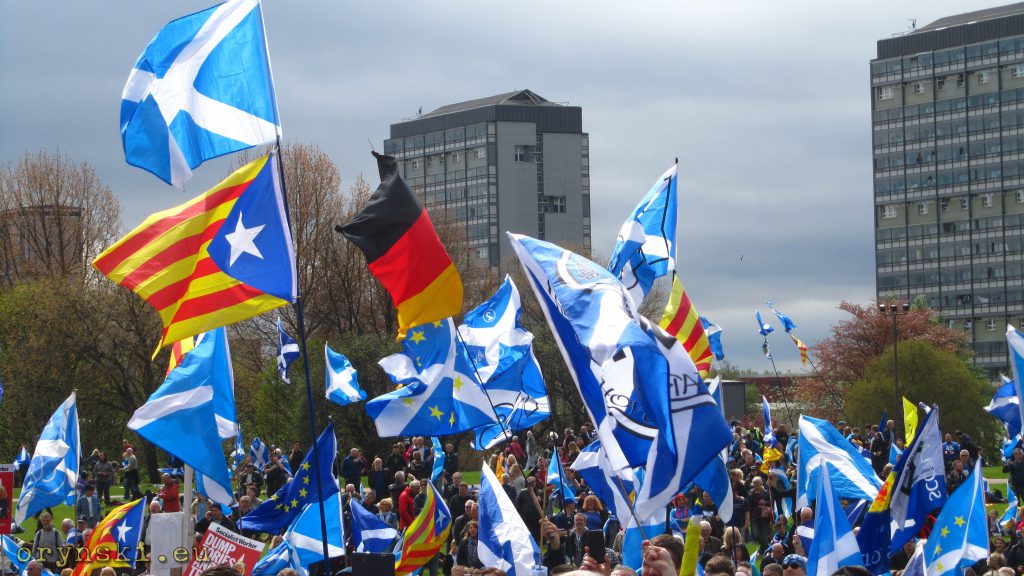 Banners and flags showed, that independence supported came to Glasgow from all over Scotland, but even those from Orkney islands: 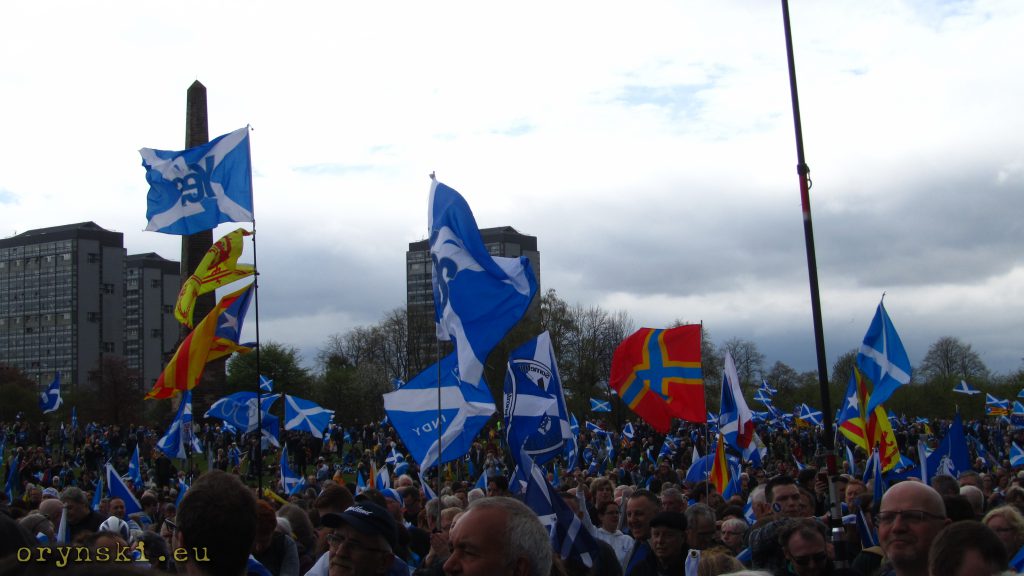 weren’t the ones who traveled the furthest: apparently there was a bunch of hard-line supporters of Scottish independence who came all the way from Germany: 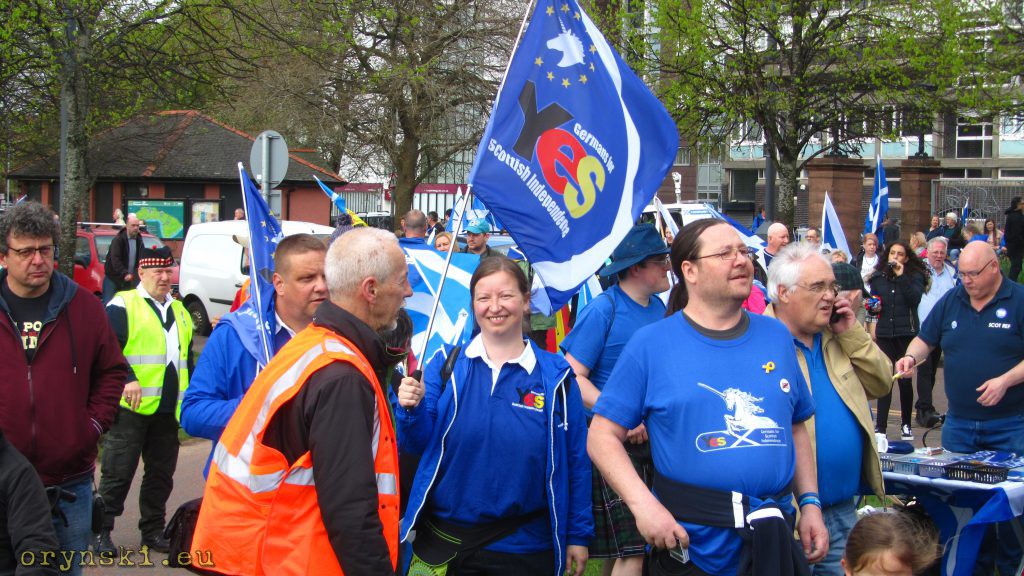 There were some Union Jacks as well. A group of unionists staged a contr-manifestation on, nomen-omen, Union street. There was about 20 of them, perhaps a bit more, and when I marched past them, they caused a lot of amusement. The guy with the megaphone has been so busy reading his speech from a piece of paper, accusing Scottish nationalists of being anti-English, that he failed to notice a group of people marching under the banner “English for Scottish Independence” that would easily outnumbered his team by the factor of two… 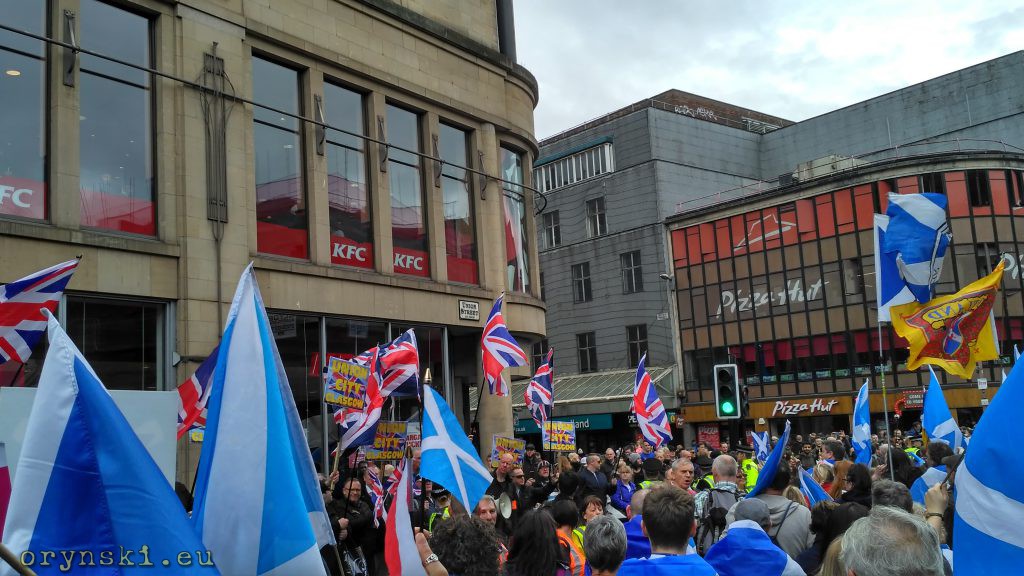 The other group of the opponents of the Scottish independence was less amusing. They had only one Union Jack with them, but they focused on shouting abuse at the participants of the march instead. Those were well outnumbered by the police officers, who prevented them from engaging into a unwanted kind of discourse even more: 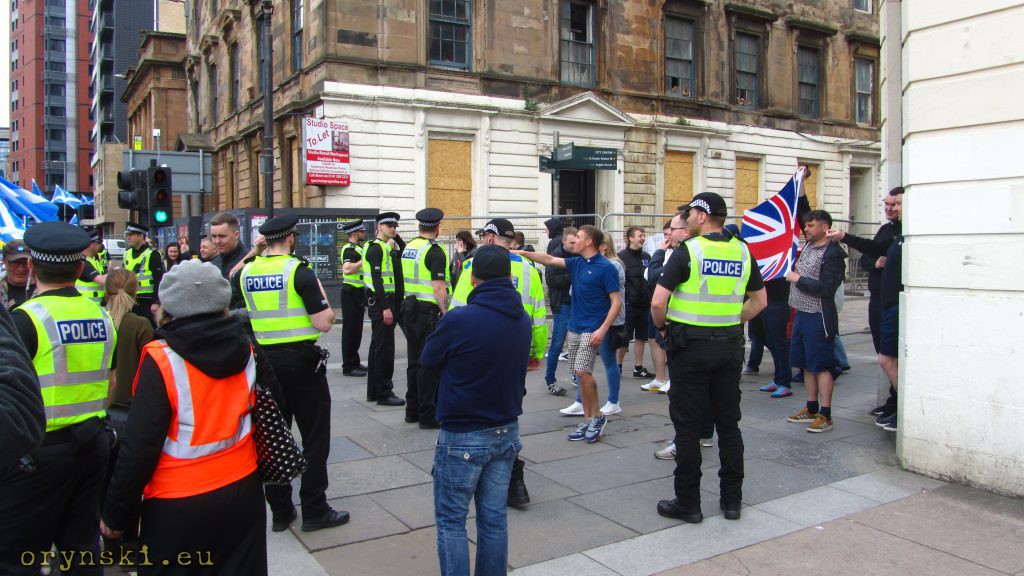 This was the only moment when I witnessed Police having actually anything to do, apart from securing the marchers from the traffic. When the march arrived to Glasgow green, welcomed from the stage by the performance of Scottish drums and pipe band Clanadonia, Police officers seemed to be pretty relaxed, engaging in friendly conversations with the members of the public. 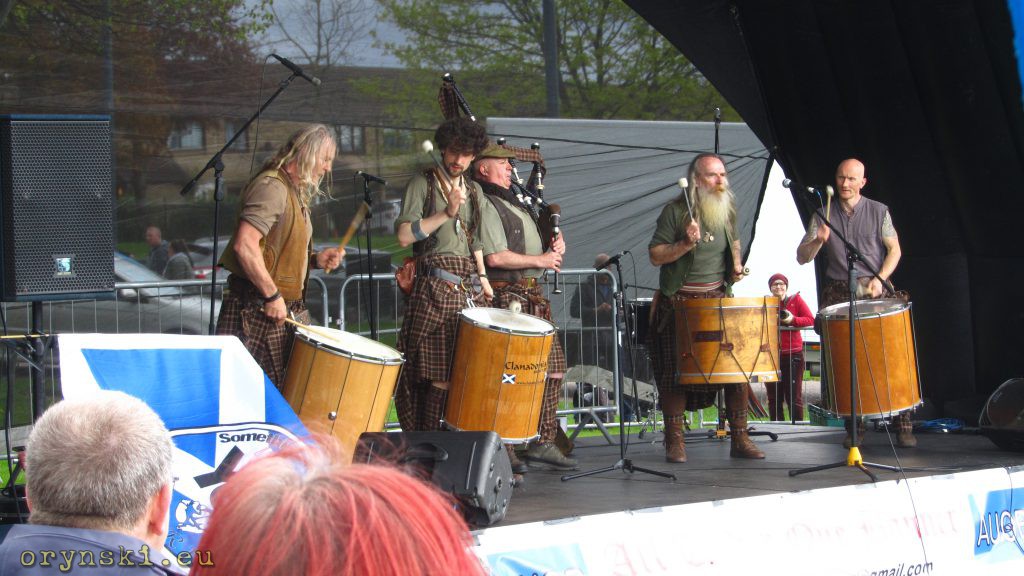 And this is why I like to live in Scotland so much. Because there was no need of heavy police presence – no need for police batons and shields, no need for rubber bullets (or any weapon at all), no need of covering faces, spreading tear gas, burning flares etc. No aggression, no hate, no “death to enemies of our homeland”, no “there will be a stick to smash leftist’ faces”, no declarations who should be hanged, and who should be praised, not a single reference to totalitarian regimes (those red flags were there in their XIX-century meaning, they had nothing in common with Soviet Union). Just a few tens of thousands of smiling people, marching through the streets of Glasgow.

You might agree with the idea of Scottish independence or not, but one thing is pretty sure: if Polish independence marches looked like this, Poland would be much better place. 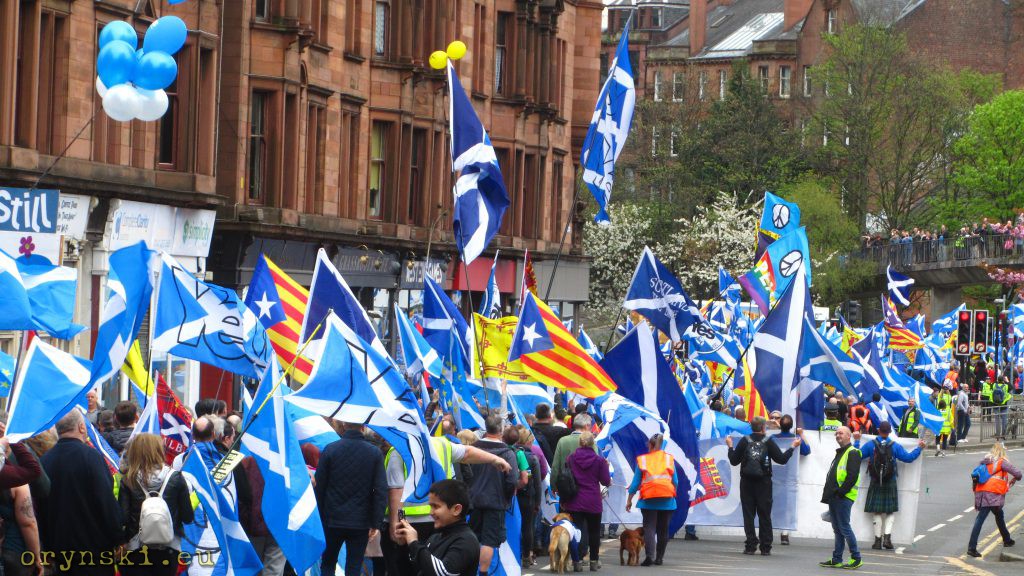 Scotland allows Poles like me to have our dream lives

Poland for Poles, England for English and Poles!

Poles at the polls: Voting on two passports
No comments yet