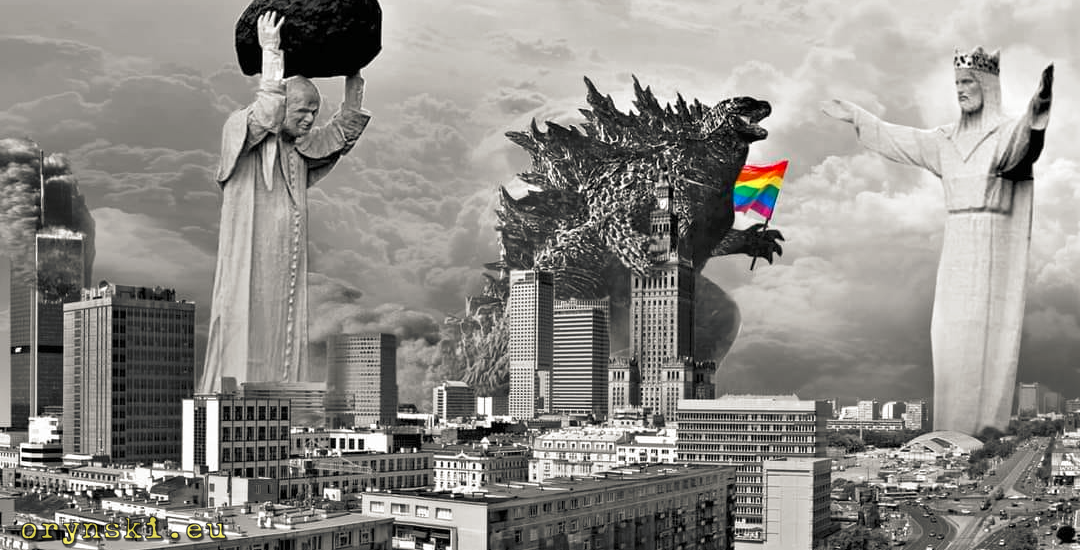 Hallelujah! The ruling coalition has been saved. Kaczyński and his two side-kicks finally signed a deal. Alas, we, the public, were not informed about what that deal is really about, but who cares. Our job is just to vote, preferably for them. And then leave politics to the grown-ups. What we do know is that Kaczyński will finally get into the government, as a deputy prime minister for security. He will oversee Ministries of Defence, Internal Affairs, Administration and Justice. Nobody really knows what such position would entitle or how it is supposed to work. But it’s sure he is there to keep eye on Ziobro. But at the same time, to take at least partial resposibilities for the government actions…

The first results of that deal can be also seen in lower rank: a long-time director of the fish farm near Niemodlin, and expert with 40 years experience, has been sacked just two years before his retirement to make way for a member of Ziobro’s party, a young graduate of political sciences with no relevant experience. “He can’t say the difference between a bream and a carp” cry employees, who admit that they voted for the current government. Perhaps they won’t any more.

There has been also a deal signed between the government and the miners, who were on strike. It promises them very slow extinguishing of the Polish coal industry – some mines are to operate up to 2049 year. Miners seems to be happy, but apparently they haven’t read it carefuly – the deal will come in place provided, that European Commission will agree for the mines to receive public help. Which is almost certainly not going to happen…

There is a new deal between TVP and the church as well. Thanks to it, TVP will broadcast two holy masses, the number of Catholic shows will also increase. As by coincidence one of the characters in popular soap operas decided that he won’t be gay any more and decided to get back together with his childhood sweetheart…

It is unclear what TVP will get from the church in exchange. I doubnt it will be money. Which is a shame, as TVP seems to have already burned through 2 billions received from the government last year. There is talk about scrapping Eurovision Junior that is for the second time organized by Poland – as despite the fact, that win of Polish teenage singers was presented as one of the biggest successes of TVP during Jacek Kurski’s rule, apparently it is against the rules, as the show “endangers physical, psychological or moral development of minors“.

It is clear that TVP cuts corners whenever possible, which is very visible even if one watches their posters warning about COVID-19. “If you are quarantine, you can’t work, so you wont’ make any money” TVP warns its former employees after forcing them to become self-employed…

But government is too busy to look for the right of employees, even those of the institution crucial for them. They have too important things to do. A legal expert, for example, has been forced to go to Warsaw (and pay his own travel costs) to be interviewed for 15 hours over two days. The prosecutors wanted to force him to admit, that his legal expertise, in which he deemed an attempt to organise postal elections earlier this year illegal, was NOT ordered from him by the parliamentary office of legal analysis… The prosecutors try to mount the case that e-mail ordering the professor to write it was falsified. It’s unclear who would like to do such thing and why?

I can bet one thing: he is not to get a job in newly created institution, joint project of Poland and Hungary: an Institute that would investigate the rule of law in the UE countries, that will prove that the Western European countries try to use double standards against our two countries. “The aim of this institute will be that we are not seen as idiots” said Hungarian minister of foreign affairs. I am afraid, that it might be a little too late for this…

The idiotic fight against LGBT does not help in it. Barbara Nowak, a school ombudsman from Kraków, known to readers of this series for her ultra-Catholic views, went to Poznań to take part in an academic conference entitled “Marriage and family as the greatest good of humanity”. During her speech she alarmed about the state of the Polish school that, while the curriculum is generally allright, have elements of gender and LGBT ideologies hidden in the handbooks. But the worst thing is that a large group of teachers are “under ideological pressure” and are “believers of that ideology”. A newly appointed school ombudsman for Poznań agreed with her, that this is a great risk for young minds, who always do stupid things to try to fit and be accepted by others. “In the past they were drinking alcohol or doing drugs, now they have to accept persecuted minorities”. My God, what those young people have to deal with today!

I wonder why nobody speaks about “ideology of rape”. Especially that this one, unlike the LGBT, seems to be really problematic. The victims still have troubles to get justice, and the courts ruling are sometimes completely absurd. Like the court in Poznań, who ruled that two man who had sex with the woman, whom they earlier violently beaten, causing life-lasting disability, are not rapists. Yes, apparently they haven’t raped her, they simply took the advantage of the fact, that she was unable to defend herself. Because she was badly beaten just before. By them.

Meanwhile while Church strongly opposes the Istabnul convention, when it comes to LGBT apparently it is a monolith. While some bishops encourage their flock to put their signs under the project of “anti-LGBT” bill, some others – like Archbishop of Poznań Stanisław Gądecki oppose it and ban his subordinates from giving any help to its proponents.  The discussion took to the streets and took a very peculiar turn.

One on side of that well-argued discourse we have some strange men, judging from the standards they held, a Heralds of Czech King John the Blind of Luxembourg (are Czechs meddling with Polish affairs again? Or are those Scots, as they then turned to play bagpipes), encouraging people to sign the project (click here). They are met with strong arguments (?) coming from the other side:

Apparently there is some deeper meaning to this barking, but even my LGBT activist friends can’t think of any, and when asking at source, the answer can be simplified to “we don’t need friends who are too stupid to know what is the meaning of that”. Well…

I just hope they won’t do much of that barking around hunters. Who still don’t have enough and demand that the government allows them to shoot wolves, that are under strict protection in Poland. Apparently it’s wolves’ fault that wild boars can be seen travelling across the country or entering cities. And it has absolutely nothing to do, that boars are being hunted at the unprecedented scale under the pretext of swine’s disease…

But at least a lot was going in the field of humor last week. For generation a small town of Wąchock was a target of many nasty jokes, in which was portrayed as the most backwards place in Poland. This role is now taken over by Kraśnik. Why?

Well, after realising that they might loose even 10 000 000 Euro from Norwegian funds because of their anti-LGBT stance (see last week’s piece), they decided to re-evaluate it. The council’s proceeding was pretty amusing (as when the proponent of anti-LGBT resolution tried to explain what the letters LGBT stand for:

Unfortunately, the anti-LGBT resolution has been upheald, so Kraśnik not only remains a LGBT-free zone, but it is also a Norwegian-millions-of-Euros-free-zone. But the councillors went even further. Using the momentum they voted another resolutions banning 5G network in their city and ordering all schools to desactivate their WiFi. The meme scene answered instantly:

While most resident of Kraśnik are not too happy about that, surely it took some weight off the government’s PR team. Their campaign #zmoichpodatków (funded from my taxes) that encouraged people to share things, that are funded from their taxes resulted in Poles massively using this tag to inform everyone about frauds, nepotism and waste for which the PiS government was responsible.

But the biggest hit of the Polish internetz last week was caused by the new sculpture of the pope (the proper one, not that leftist agent Francis). Jerzy Kalina, PiS’s court artist, responsible for the monument to the victims of the Smoleńsk plane crash, was invited by National Museum to present his new instalation “poisoned well”. The instalation is a figure of the John Paul II, that holds the meteorite, that struck him in Maurizio Cattelan’s sculpture from 20 years ago, and apparently it is about to struck something flowing in the pool of red liquid, in which he stands in.

The meaning of the red liquid was not known, so the artist had to explain it himself. The red represent remains of the communism, and the new incarnation, notably LBT people, who place rainbow flags on the monuments. He said, that he is really sad that people don’t respect his religion and make fun of the monuments of the important religious figures. I doubt that providing the best meme template in months would help him to achieve this goal… 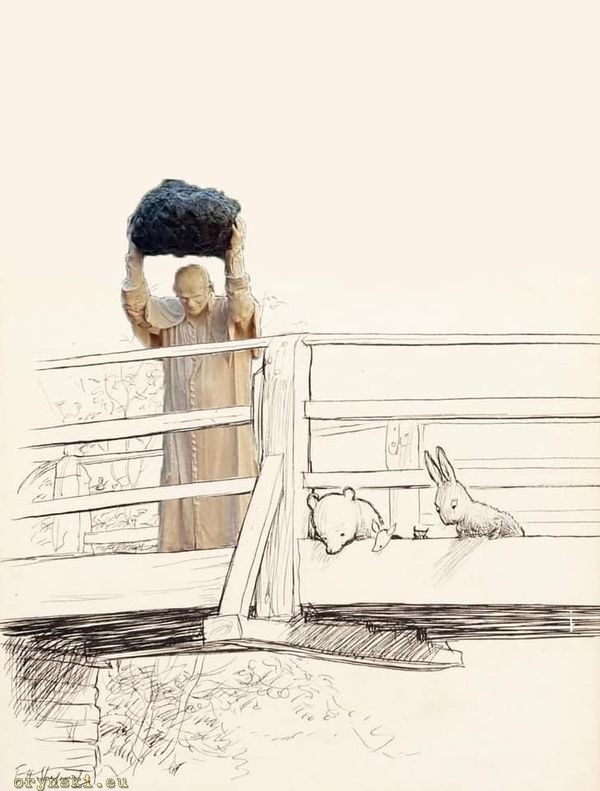 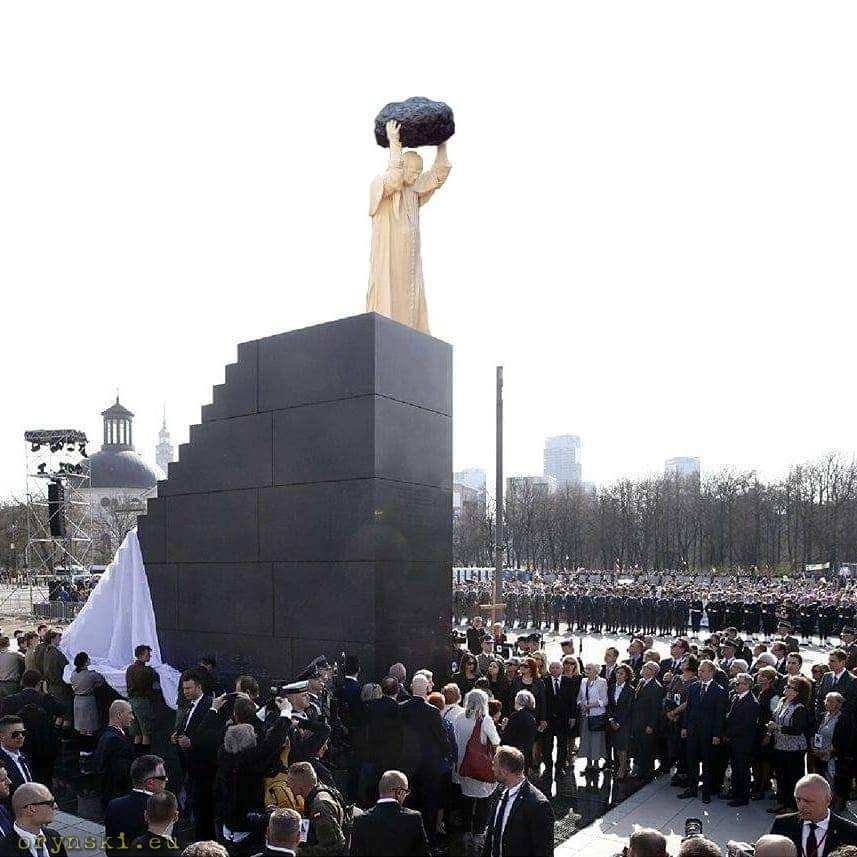 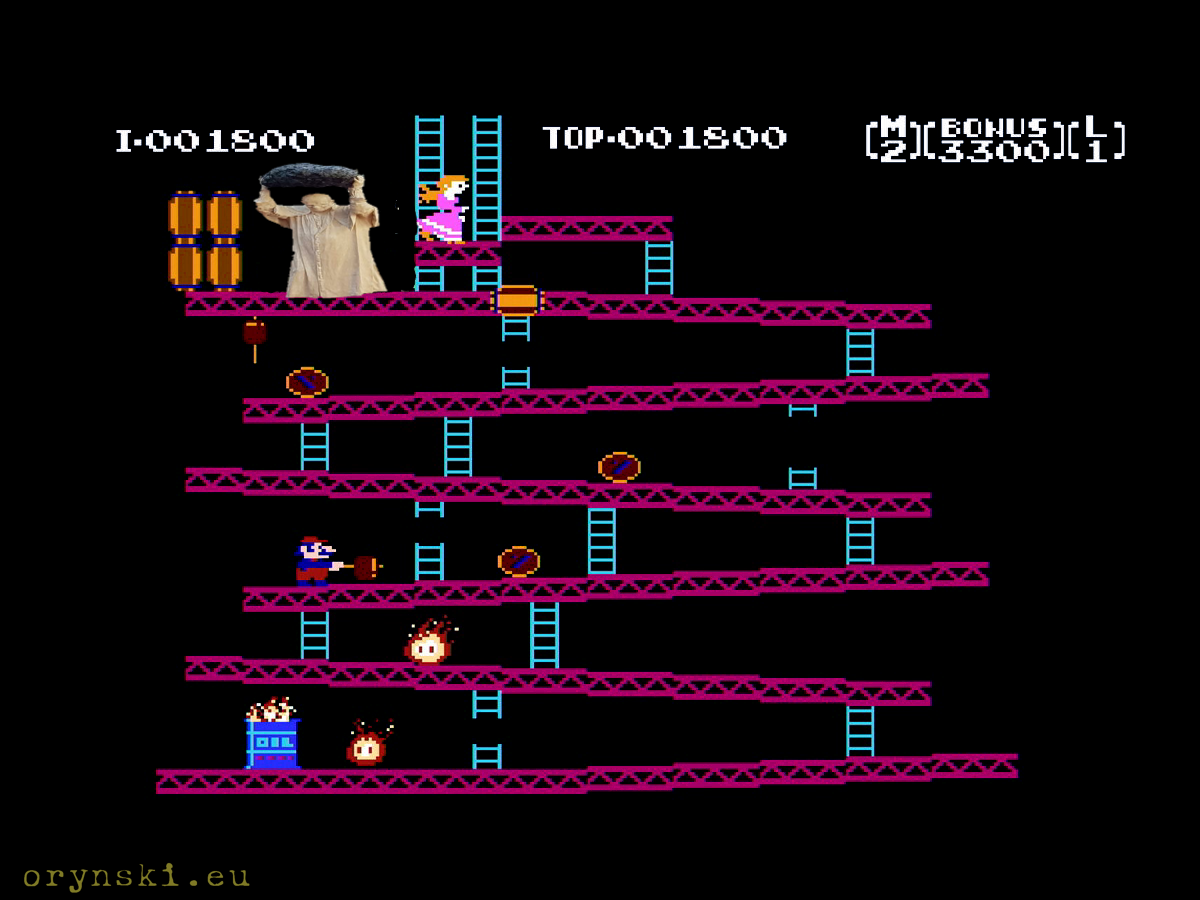 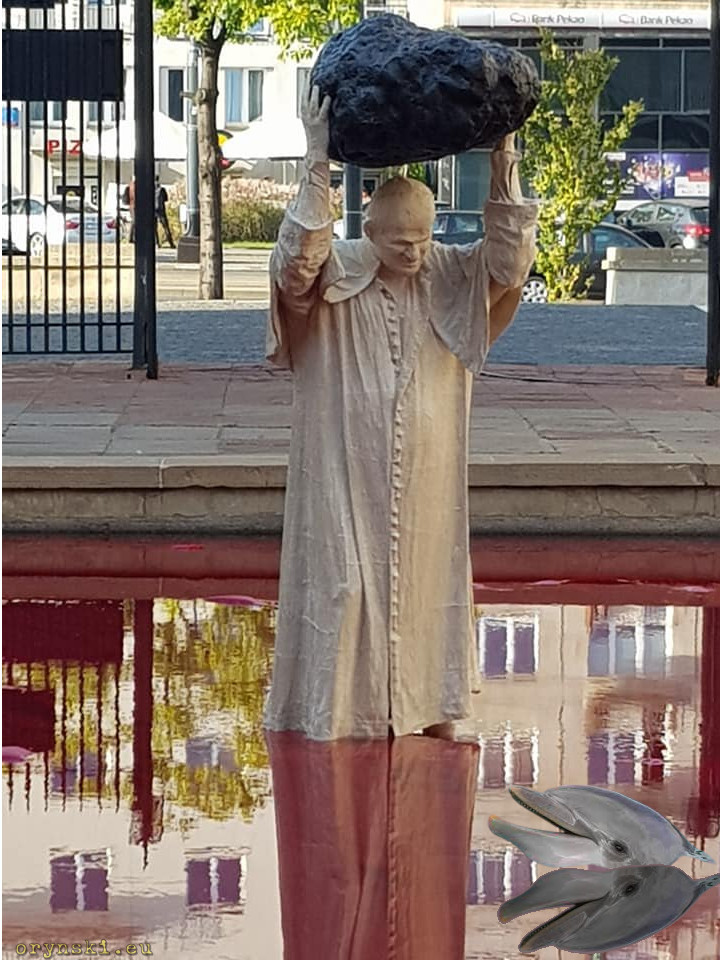 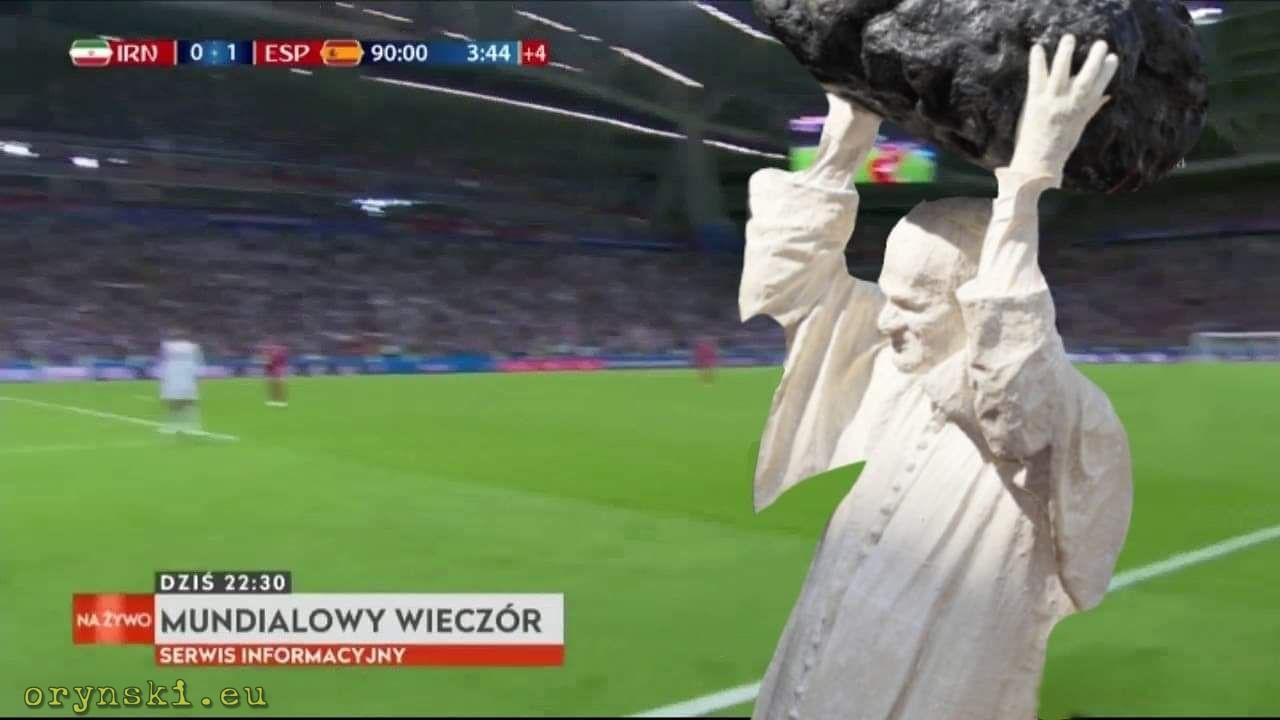 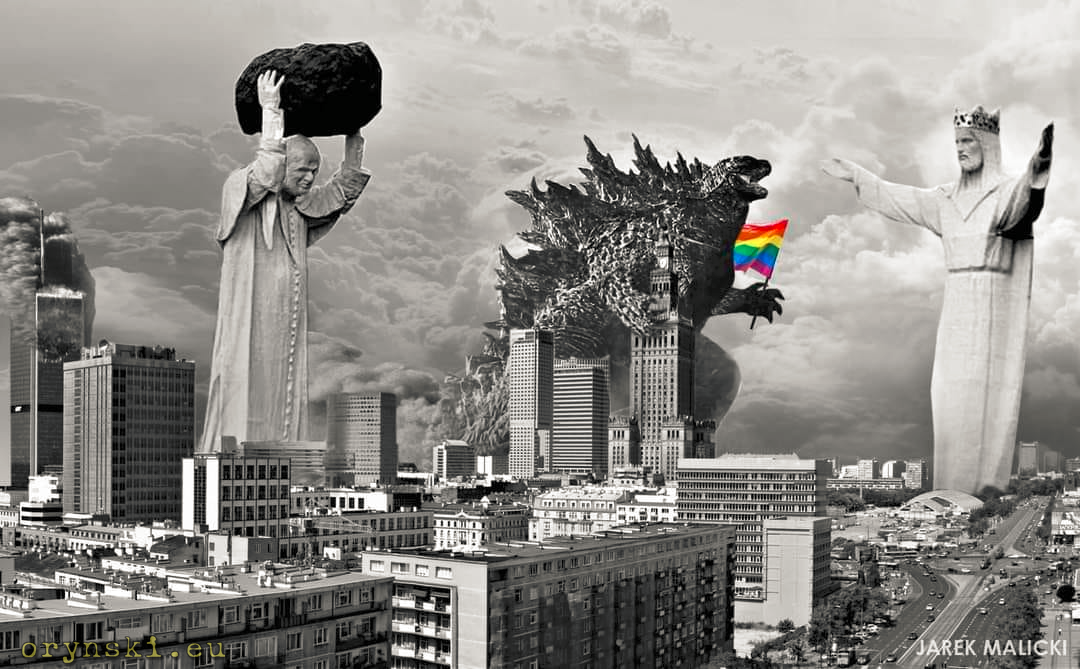 This piece was written for Britské listy
Authors of memes unknown, except for Jarek Malicki. Assumed Creative Commons license, used for informative purpose 🙂