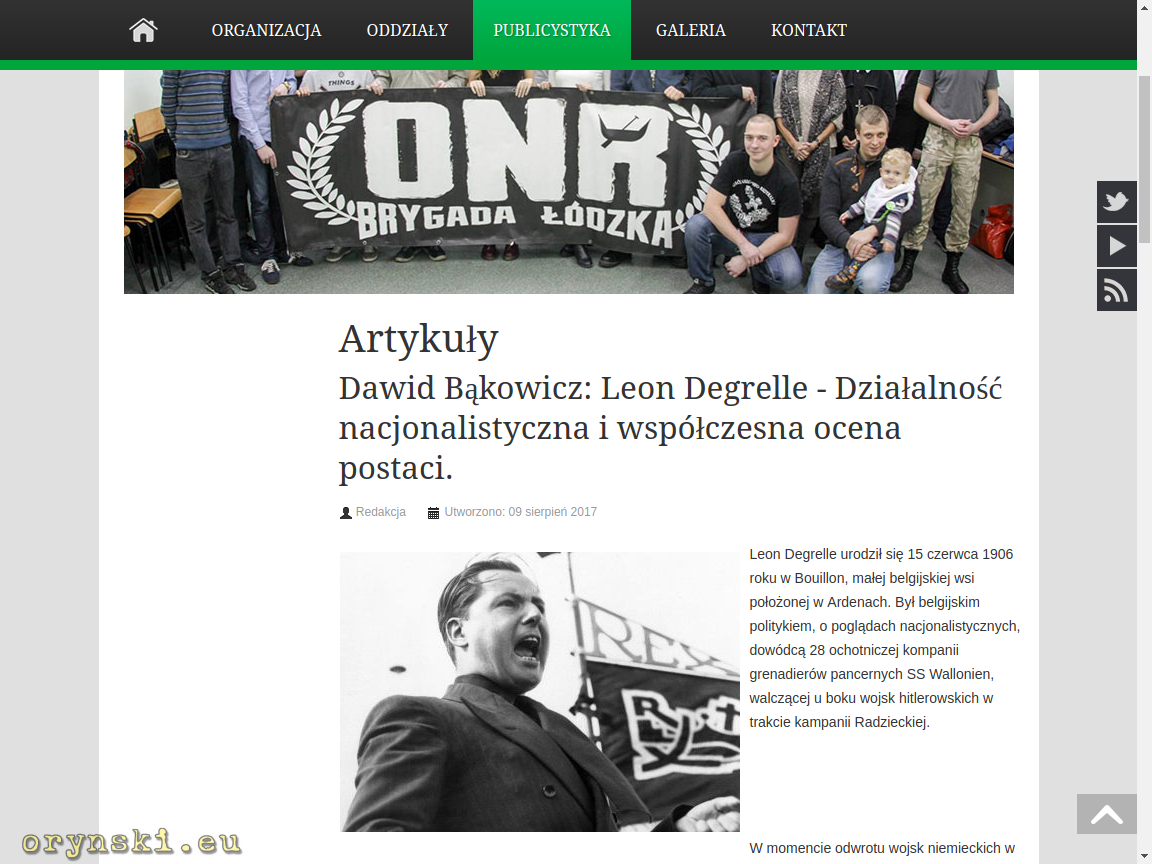 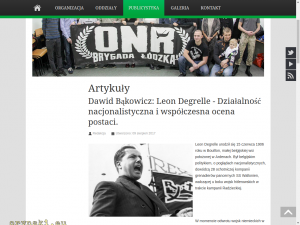 Yet again, Polish diplomacy raises from it’s knees only to hit it’s head hard in the corner of the table. This time they managed to enrage everyone – the West, the Jews and both sides of the political conflict inside Poland. But let’s begin with clearing some facts.

Let’s start with this Haaretz article, which is simply an example of exceptionally bad journalism or simply a deliberate attempt to spread false newsa and incite hate against Poland. It states “Polish Parliament’s Lower House Votes to Criminalize Mention of Polish Crimes in the Holocaust” which is plainly not true. The new bill voted in by the Polish Sejm criminalizes “blaming Poles for crimes committed by Germans”, so I can see why Haaertz, often strongly anti-Polish paper, might be worried. The rest of article is also full of, at best, half-truths.

But does it mean that we don’t have a problem here? No, I am very far to say that. See, the new law that was just passed in the Polish parliament is just yet another case of PiS properly recognizing the problem, and then attempting to solve it with disastrous results. The problem of Poland getting blamed for Nazi crimes is real, and the expression “Polish concentration camps” is offensive to hundreds of thousands of Polish victims and prisoners of the Nazi concentration camps. To say that using this term is OK, because concentration camps were located in Poland is as much ridiculous, as to say that using terms like “American attack on Twin Towers in New York”, “Japanese bombing of Hiroshima” or “Czechoslovakian invasion on Czechoslovakia in 1968” is OK, because geographically speaking those events took place in those places.

The fight for the historical truth, carried by all Polish governments so far, was finally making some impact. Apart from the anti-Polish fractions in Israel and people, who deny German involvement in Holocaust, nobody had a problem with that Poland is asking for carefulness when using this misleading term.

So where this problem is coming from? Well, PiS is well known for their attempts to re-write history. In their vision, Poland was solely a victim and yet, despite their own difficulties, Poles were en-masse helping to save Jews from the Nazis. And this is also not true. While Poland has the biggest number of Righteous Amongst The Nations and heroes like Irena Sendler deserve much bigger recognition, the heroism was not the rule, but rather an exception. And not only most of the Poles were passive, but some were actively attacking Jews themselves. Crimes such like pogrom in Jedwabne were not unheard of, and many Poles were actively cooperating with Germans, or extorting money from Jews and Poles who were helping to hide them. Those people were called “szmalcownicy”, as Ryszard Czarnecki was kind to remind us recently, when he used that word to offend an opposition MEP. Moreover, some Poles even before war were supporting Hitler in his quest agains Jews and spreading anti-semitism. Amongst them was one notable organization Obóz Narodowo-Radykalny (Nationalist-Radical Camp). Today this organization has been re-established and it’s members openly relate to their pre-war predecessors, yet PiS seems to have a cosy relationship with them, about which we were writing in Britske Listy for several times already.

And this is where the problem lies. As there is nothing wrong with the new law itself (apart from that it could be written better, as in case with most of what PiS introduced during their time in power). There are similar laws in many countries, such like those that ban holocaust denial. The problem is with PiS, as they bend backwards to please their best buddies, nationalists from ONR. Just look here to see how Polish Minister of Education (sic!) writhes to avoid admitting, that it’s Poles who are responsible for pogroms in Kielce or Jedwabne.

Yes, we do have problem. And spreading fake news by an Israeli paper, or Jewish activists starting twitter war by deliberately using hashtag #PolishDeathCamps will not help to solve it. It only incited Polish anti-Semites to respond with equal violence and the fact, that Polish state TV broadcasted those anti-semitic tweets further enraged Jews. So much for damage control, good job PiS.

But the thing is that the new law is as good, as people who put it to work. And PiS is known for bending the laws in order to achieve their political goals.

Perhaps something will change after the shocking reportage broadcasted in television TVN, about which we wrote last week. Members of ONR complaining about having problems in their workplaces, as the reportage was showing the problem of neo-Nazis infiltrating nationalist movement in general. After some shy voices criticizing the nationalist ties to fascism were heard from PiS, ONR spokesperson accused PiS of treason for abandoning them and choosing a “euro-leftist” path instead of supporting true Polish patriots. The question is: will PiS really decide to separate themselves from such a significant portion of its supporters, or it is just a game until the dust settles down? So far PiS reactions to the neo-Nazi scandal are inconsistent. While deputy Minister of Justice, Patryk Jaki mentions, that they might be on the path of delegalising ONR, Joachim Brudziński, one of the closest aides to Jarosław Kaczyński, says that it is only example of the oposition and elites of Brussels trying to impute us that we have a problem with neo-Nazis to cover much significant issues such like illegal activities of opposition or attacks at the offices of PiS MP (recently someone threw a paint on one of the PiS local offices, and a poo at the other). He also stresses up again the right wing narration, that fascism and nazism have nothing to do with the right, and they are in fact, leftist. Apparently they are afraid that they might go step too far, thus loosing control of the nationalists. And what if the fascist decide to go into politics on their own instead of supporting PiS?

A right wing discussion club in Warsaw had a lecture, in which it’s boss Krzysztof Mossakowski and his guest praised Hitler. According to them “Poles had it better in Germany under Hitler than they have it now under Merkel”, and Hitler was loved by Germans almost as much as “SS-Obergruppenführer Reinhard Heydrich was loved by Czechs”. The other lecturer was publisher Andrzej Ryba, who is responsible for printing Leon Degrelle’s book “Age of Hitler”. If you don’t know who Leon Degrelle was, he was a Belgian Nazi, and member of Waffen-SS. Or, if we believe this article on the ONR website, “Ideal of Catholic, soldier, statesmen and the knight standing at gates of his believes and values, for which he was really to spill blood, own or that of the enemies (…) From the perspective of a man born in XXI century (…) he was a hero and a role model”. Yes, this is coming from the web page of the Polish nationalist organization, that claims to have nothing to do with such leftist ideologies as Nazism. I guess Britske Listy can expect to be sued now, just as TVN was sued by the organizers of the neo-Nazi music festival shown in the reprotage (during which radical skinheads with swastikas tatoo’s hailed and shouted “Sieg Heil” and the performer was calling from the stage in an abusive language to perform violent acts against Donald Tusk). They feel offended after it emerged that they are Nazis. They demand 1 000 000 zł compensation. Because, you know, they are not Nazis.

But, let’s get back to this Belgian nazis for a second. After Guy Verhofstadt criticized nazis taking part in March of Independence last November, the answer from the Polish right was reproaching him those 10 000 Belgian Nazis. And now I read that Leon Dergelle was such a great guy. So what was that about – they were criticizing him for not praising those brave knights and model statesmen, or what?

In other news, this time from the real left wing organization. A left wing portal Krytyka Polityczna published a discussion in which 5 women discussed if Viagra should be available without prescription. They use the same arguments that are common amongst male politicians when they discuss matters of abortion. “Is erection a gift from God?” – they asked. – “Should we allow pro-erection lobby to make it simply a commodity?”. This parody was appreciated even by people of the right. Those smarter ones, that is, as many right wingers went ballistic, outraged by insolence of those ignorant feminists, thus furter strenghening the message of Krytyka Polityczna.

There was yet another scandal involving TVP. One of their popular, long running crime dramas is “Father Mateusz”, a format from Italy in which a bicycle riding priest (really? A bicycle? Aren’t there any homeless people in Sandomierz, who could donate him a luxury car, like they did to Father Rydzyk?) solves crimes that plague city of Sandomierz. Recently, TVP tried to use it to spread anti-refugees fears. It has emerged that one of the actors dropped the role after learning that his character, a Muslim refugee, is to plant a bomb in a local kindergarten. TVP declared that it was not true, and to prove it, they hastened broadcasting of this chapter. They managed to remove all references to the refugee being a Muslim terrorist by editing it so heavily, that the plot now makes no sense at all. But at least they proved again, that Wyborcza is spreading lies, right?

Some old matters are slowly coming to their closure. The case of the skin of lynx, that decorates former Minister of Environment Jan Szyszko’s summer house for example. As lynx is under strict protection in Poland, even being in possession of such skin is strictly regulated, and the prosecutors were to investigate if the lynx hasn’t been killed against the law. But minister Szyszko explained beyond all doubts that he is in possession of this trophy legally: it was a gift from a friend of his, who, unfortunately died before he managed to give him documents that should go with it. Jan Szyszko refused to provide name of this person – would it be possible, that it was the same homeless Stanisław that donated two luxury cars to Father Rydzyk? Anyway, the prosecution was not interested in further investigation. Jan Szyszko was cautioned and the case is now closed.

The investigations in Beata Szydło’s car accident on the other had reached some bumpy patch. It has emerged, that the witnesses to the case are assessed by a psychologist to ascertain, if their testimonies are credible. It just happened that of 30 experts available, this job was given to a wife of Beata Szydło’s party colegue. That’s amazing, isn’t it? What would the chances be?

But some people have enough already. According to portal Wirtualna Polska, there was a mutiny in a Polish branch of international corporation, after the street at which their office building is located has been renamed from People’s Army street into Lech Kaczyński street. After the idea of moving the company has been rebuked, they have proposed to change the layout of the building in such a way, that the official front doors would now be the one that enter the building from the side street, thus avoiding having Lech Kaczyński’s name in the official company documents. The international management of the company refused to comply, not willing to be involved in such political stunt.

This might shed a new light at the recent case that made news worldwide about a run-away domestic cow that joined a herd of bisons in Białowieża forest. Perhaps her cowshed was also named after Lech Kaczyński and she simply cannot bear it any more?

This piece was published in Britske Listy
Pic: Screenshot from ONR webpage.

One Reply to “Meanwhile in Cuckooland 55”