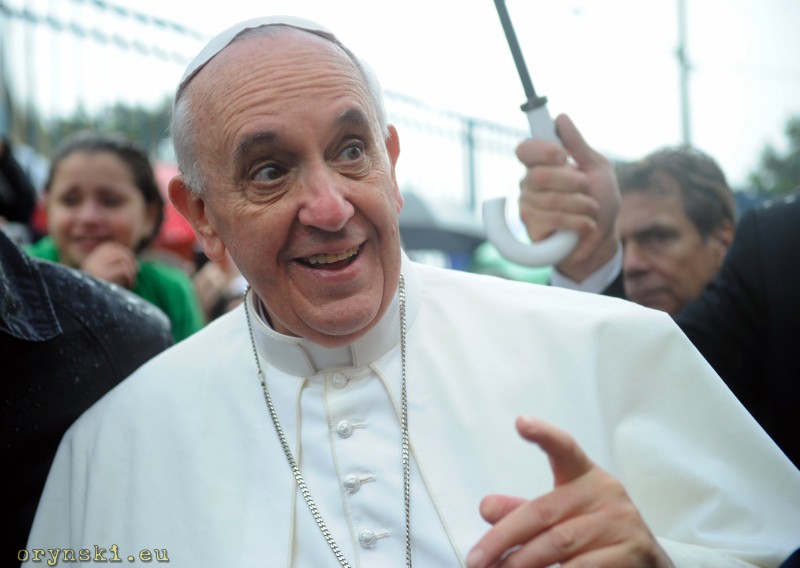 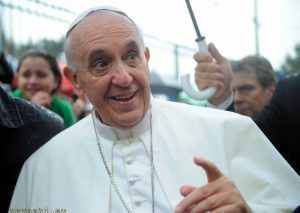 “If Pope Francis is unable to get his shit right, then he should go and die already” – said a priest and theology professor Edward Staniek. Or at least I understood it that way, as the exact quote was “I pray for wisdom for the Pope, for his heart to open to the Holy Ghost actions, and if he wont’ do it – I pray for his quick departure to the home of Our Father. I can always ask God for a happy death for him, as to have a happy death is a great grace”. According to Staniek forgiving people who sinned and welcoming refugees is incompatible with Catholic religion, and so, if pope wants his flock to do so, he is incompatible with Catholicism as well.

I could not believe it. I am not naive, I know that Polish Catholic Church has as much in common with Jesus’ teachings as Law and Justice party with actual law and justice, but even for them that was quite extreme. I’ve decided to consult my friend, who belongs to a small minority of Polish Catholics who are not just a hypocrites that have no understanding of their own faith. According to him, the matter is very complicated – the Pope is just a human and every theologian have right to disagree with him, so criticizing the pope is perfectly allowed. He wasn’t too shocked with that dead wish as well – while he does not approve this way of speaking, he explained to me that Catholics believe, that death is not just an end of life, but – if we deserved it – the point where we meet God and live forever with him in heaven. It’s in a manner of speaking kind of leveling up. I see his points, and I am happy to see, that both of us feel that what father Staniek said was not really OK. Apparently this is one of the few things I agree with church’s hierarchy as well, as the Kraków archbishop Marek Jędraszewski said, that those words filled him with “deep pain and regret”…

Apparently priest-professor Staniek was not the only one who spat some utter rubbish this week. President Andrzej Duda made some waves as well. Let me just quote him, word to word:

“Very often people tell us: what do we need Poland for? European Union is most important. You know, there are such voices. But they should recall the 123 years of partitions of Poland. How Poland, back then in late 18th Century, lost it’s independence and disappeared from the map. Back then, there were also people who said: perhaps it is for the better? Conflict will end, all those rebellions, insurrections, wars, mishaps, confederations, finally we will have some peace. But they soon have realized that wars and conflicts are still in place, it’s only that we no longer have any influence and can’t decide about ourselves. Because now, our fate is being decided in distant capitals somewhere far away, and they take away our money from our hard work, so in fact we work for benefit of others”. He then summed it up with that it is worth to be independent, because only then we will be able to decide who is going to rule our country. I am sure that president Putin 100% agrees with Duda on that…

Sad jokes aside, it is pretty clear that PiS is trying to keep the right under control. They probably realize, that they have overcooked it, and if that steam escapes from under the cover, it will fill the space between Kaczyński and right wall, thus leaving him only with his hardcore followers. This is why they always try to use history to justify their actions – and, believe or not, but Andrzej Duda is the one who does it better than others. Prime minister Morawiecki during his speech at Wrocław University tried to play down Polish responsibility for anti-Semitic purges in 1968, saying that it was responsibility not of the Poles, but of the Soviet regime, that was brought to us “on the Soviet bayonets”. “Marshsall Piłsudski said, that we should write our history ourselves, otherwise someone else is going to write it for us” – said Morawiecki, and then immediately went from words to actions, giving an hour long lecture on basic Polish history a’la PiS. Professor Ryszard Krasnodębski, a mathematician, economist, Home Army veteran and participant of 1968 anti-government strikes, could not handle that and left, without waiting for the medal he was about to be awarded. “Prime minister abused his position. This was an assembly of the academics, those are serious people, they should listen to the serious things on current topics, not being lectured in elementary history” – said Krasnodęsbski – “This is not prime minister, he has not a clue of what is he talking about”.

But of course Morawiecki is active also in current issues, not to mention that he thinks about the future. For example recent changes in law mean that high ranking ministerial secretaries are no longer members of government but part of civil service. That means (apart from pay rises, of course) that the future government will have it’s hands tied, as it will inherit civil service, where the highest level is strongly politicized and loyal to PiS.

– As usual, there is yet another attempt to push law that will de facto ban abortion. Right wing think tank Ordo Iuris proposed a new law, according to which not only the mother, but also an unborn baby will be considered a patients – and thus abortion will be de facto illegal, as you cannot kill a patient. Meanwhile in parliament PiS is trying to undermine the existing grounds for legal abortion and its actions are again going under the opposition radar.
– Police from Opole took a man to the court. He is accused of obstructing legal manifestation, that was obstructing another legal manifestation: he played a siren sound on his megaphone to drown in the abuse shouted by a small group of pro-life activist protesting women right’s march. Pro-life activists aren’t being taken to court. Apparently obstructing legal manifestation with the use of the sound equipment is OK, as long, as the obstructed aren’t PiS supporters…
– PiS has proved again that they are unable to design a reliable and consistent law. This time they shoot themselves in the foot spectacularly. Writers of the new bill on the National Council of the Juidiciary (which, in part, was responsible for decision of the Irish judge to suspend extradition of Polish criminal to Poland until Euuropean Court of Justice rules if there is still rule of law in Poland), they forgot that they don’t have all cards in their hands yet. Meetings of the Council are summoned by it’s chairman. PiS was sharpening it’s teeth already to replace current chairwoman, prof. Małgorzata Gersdorf with their own man, but she has outsmarted them: instead of summoning the meeting of the council, she gave up her job in protest of PiS placing illegal judges there. With the chairman of the Council gone, its meetings are summoned by chairman of the Highest Court, which happens to be… prof. Małgorzata Gersdorf. And since the Highest Court is of the opinion, that PiS activities are illegal, she is not going to summon the meeting of the Council until the judges illegally placed there by PiS. With National Council of the Juidiciary paralysed, election of the new chairman of the Highest Court is imposible, so the PiS plans to remove her from the office fail…
– last but not least: the government limo crash of the month award goes to a driver of the speaker of Sejm. Luckily, the V.I.P was not present in the vehicle when it had hit the barriers in Eastern Poland, the driver and bodyguard haven’t been injured as well, so the only harm is, yet again, to the taxpayer’s pockets.

PiS MP Wojciech Kossakowski voted for the limitations of the Sunday shopping. And wanted to go even further than the final version: “The law should be the same for everyone” he said. His wife Luiza apparently disagrees with him, as the shop run by her in Ełk was open yesterday. It would not be the problem if she was standing behind tills herself, but the journalist of the wp.pl portal who bought some drinks there, was served by an employee. Ms Kossakowska explained very clearly and not chaotically at all, that the shop was not open, it’s just that she happened to be there to do some paperwork, and then there was some emergency situation, so she had to open it for 15 minutes, and it just happened that a regular customer popped in, so she served him, but she would never open the shop on Sunday. Except that, according to the locals, it is often open on Sundays and it was opened even on Easter Sunday. Somehow I don’t believe her.

Remember two weeks ago, when I’ve been laughing that they should send some of those propaganda trucks across the ocean? Well, so far none of them are being reported on the roads of Argentina, but there will be at least one in the USA. A haulier from Chicago just painted one of his trailer to spread the message, that Death Camps were German and Poland deserves war reparations:

There were also some good news from Poland. Or at least kind-of-good. Tomasz Komenda, sentenced in 2004 for 25 years for a brutal rape of an under-age girl was released from prison after 18 years when it became clear that he is obviously innocent. The murder took place on Hogmanay 1997 and his alibi was confirmed by 12 people, yet he was sentenced on the ground of some weak evidence and his own testimony. It has later emerged that he agreed to say whatever they want after being beaten badly by the police. It happens that this tragic case of the innocent man, who endured two decades of hell (child rapists don’t have easy lives in Polish jail) places a shade on all those monuments of Lech Kaczyński: he become a minister of justice when investigations in that case were conducted, and as this case had a huge media following, he had personal interest in that the murderer would be found quickly and punished harshly. He even personally sacked previous prosecutor after accusing him of being inefficient.

Many people partially blame Lech Kaczyński for the Komenda’s case, saying that if not the constant pressure from him, the investigations could take longer, but be conducted properly. He is of course no longer with us, as he died in plane crash in Smoleńsk (which, some say, might also be partially blamed on him trying to pressure pilots to land despite unfavourable conditions), but his then-deputy, Zbigniew Ziobro is still around – he is Poland’s current justice minister. And he also likes to take manual control. And if we remember the case of young boy, who’s Seicento has been rammed by Beata Szydło’s limo and now is being framed to take responsibility for this crash (see here and here), I am afraid that there might be more similar cases.

This piece was written for Britske Listy
Picture: Agência Brasil via Wikipedia, CC.3.0