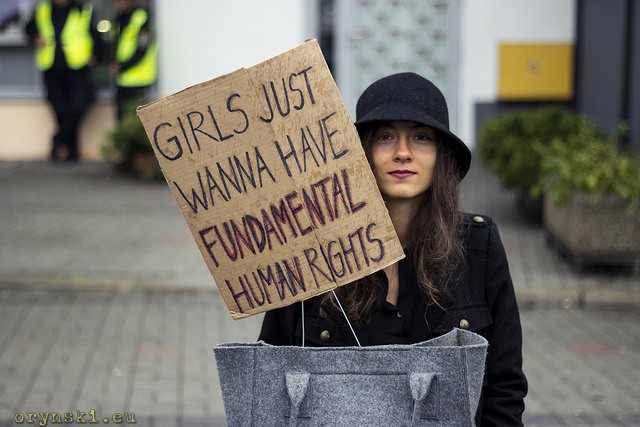 Women took to the streets in Poland again to fight for their rights. According to Warsaw council there was about 55 000 of protesters, significant marches and rallies in protest against forcing new anti-abortion laws took place in other Polish towns and cities as well. According to PiS controlled TVP, Warsaw saw only few thousands of “proponents of killing unborn people”. And it was apparently politically sponsored protest, which shows how incoherent opposition is, as the opposition missed the vote on that subject in parliament. Marzena Paczuska, former head to Wiadomości, TVP top news program and advisor to TVP chief Jacek Kurski said, that “#BlackFriday is the manifestation day of women, who lost their womanhood, charm and joy of life. Women, that men do not understand and do not want”.

In a way, she might be right. Surely, this is how PiS treats women. They don’t care about their charm of joy of life. They don’t care. After they gave birth to the child, they could be as well discarded. They simply “want to make mother of that poor girl, take away her job, because she is expecting. They want to kick her with disdain, throw all the weight of this mistake and its consequences on her, and threaten her with years of prison if, mad from desperation, she wants to free herself from that burden that is simply to heavy for her to bear. This is the philosophy of laws that are, as it can be seen even too clearly, written by the men! They preach their noble theories about “right of the fetus to life”, they threaten mother with prison on behalf of this fetus, but at the same time they do nothing to ensure, that the carrier of that fetus have anything to eat. But, incidentally, the very same fetus, that the lawmakers are so worried about, one hour after it gets born looses all rights for legal protection. It can die of cold under the bridge, when it’s mother – who’s holy motherhood sometimes makes her an outcast of the society – has no roof over her head”.

The words in italics are not mine. They were written by Tadeusz Boy-Żeleński, a doctor and a writer… in 1930. Anyone still wonders why the Polish women needs to fight for their rights? The only thing that had changed over nearly 90 years is that now, thanks to modern medicine, they might know in advance, that they carry heavily deformed fetus. Yet Polish right still wants them to carry on with pregnancy only to watch their sick baby dying in pain few hours after the birth…

PiS claims, that demand for tightening the anti-abortion laws is demanded by the Polish people. But, yet again, it is a lie. Vast majority of Poles is happy with current legislation of the subject, and the number of those, who would like to to see a total ban of abortion is five times lower than number of those, who would like to see abortion laws to be relaxed (source). So, just as Boy-Żeleński wrote 88 years ago in his book “Piekło Kobiet”: “while our lawmakers in their project consider abortion to be equal to child murder (!!), the society – while regretting that it is sometimes necessary – absolutely does not consider it to be a crime”. No wonder, that PiS has to support the weak grass-roots anti-abortion movement run by Kaja Godek. It just emerged that they gave her a seat in board of directors of the state controlled company that manufactures injection systems for diesel engines. Her qualifications? She used to study English and her husband works at Technical University. Her work experience? She used to be a secretary… This might cause some stir – just a rumour that PiS is going to place its man at the helm of PKP Cargo, biggest Polish railway company, caused its shares to plummet 20%…

“Corruption, Nepotism, putting one’s buddies first” – thundered Kaczyński five years ago. Today we know, that this was simply his plan for the future. Even prime minister Beata Szydło placed her personal friend at board of directors of one of the biggest Polish banks. If she herself does what she criticized the previous government for, then perhaps she did not really deserves those bonuses she awarded to herself and her ministers? But suggestion that those bonuses were a step too far really angered Beata Szydło:

“Yes, that’s true, ministers and deputy ministers in PiS government received bonuses for hard and honest work. And they simply deserved this money! Those were official bonuses, awarded in line with the budget agreed in this very chamber” – she shouted. And either she lied, or she had forgotten, that the budget was voted by PiS during illegal proceedings in another chamber of the parliament: this is what those huge protests last December were about. But I wonder about one other thing: if the minister deserved bonuses for hard and honest work, then does it means, that if they were avoiding work or were doing some illegal activities, would they have to survive on their bare salaries only? If our deputy foreign minister has a fear of flight, and therefore it takes him three days to go to the meeting in Kopenhagen or to Budapest, as he goes there by car or by night train, does it counts as a hard work, or the opposite?

And what about Zbigniew Ziobro? This man surely works very hard. First, as a Minister of Justice he engineered the change in judiciary law. Now, as a Prosecutor General he deemed it to be “uncostitutional and disfunctional” and the law is being changed, after new prime minister decided to back off from some of the changes in order better Polish relations with the EU. So OK, he works hard, but if he makes two steps forward and then one step backwards, does he deserves a bonus for making three steps, or just one? And if he forced the new law, that he himself considers to be unconstitutional, can we still say that it was a honest work?

The opinion of Poles is clear: nearly ¾ of Poles did not liked Beata Szydło outburst, moreover 48% of PiS voters disagree with former prime minister. Apparently even they have noticed, that greed of Kaczyński’s team went too far. But of course not everyone in the right is in politics for money. Some really believe in ideas, and they are ready to defend their beliefs against all odds. Krzysztof Bosak, one of the leaders of the Polish nationalists for example, took part in a Twitter discussion. While he was happy with the statement that abortion is murder, he had some doubts about Earth orbiting the Sun. According to him “there is no physical evidence” and this “centuries long controversy” still awaits to be proved. He was instantly ridiculed, but the true Polish patriot never backs down, so he went further and supported his claim that statement “Earth orbits Sun” is as valid as “Sun orbits Earth” with a link to a physicist explaining the matter. This was even more funny, as in this very article the physicist explains in a simple manner why, although in theory one can set Earth as point of reference, it will make not much sense in the real world.

Apparently denial of facts becomes a pattern at the Polish right. Remember Magdalena Ogórek, a former presidential candidate supported by SLD, post-communist Social-Democratic Aliance? After she smelled where the real honey is, she become a fierce supporter of PiS, which allowed her to secure a regular job in TVP. It is probably not enough for her, as she just announced, that she never had anything to do with SLD. This is a bold statement coming from someone, who was working for the Ministry of Interior during SLD government, then has been employed directly by SLD, and in 2011 even became it’s candidate in parliamentary elections:

As an SLD candidate she was endorsed by president Aleksander Kwaśniewski himself:

In 2015, when she participated in presidential race, she indeed clearly distanced herself from being an SLD candidate, but even for Jerzy Urban, former spokesperson of General Jaruzelski government and today a cynical publicist bordering of being a troll, it was clear who is behind Magdalena Ogórek (please note: if you are easily offended then the following footage might be not good for you, as Jerzy Urban’s opinion on SLD leader Leszek Miller is expressed in an unconventional way):

As we are at recurring characters already, it is worth to mention that there are further developments in the case of the MP’s wife’s shop that was opened on Sunday despite the ban (we wrote about it last week). It turns that this is not just ordinary case of PiS hypocrisy. As the journalist published a receipt to prove, that they bought items there on Sunday, a careful reader noticed, that energy drink, purchased by the journalists, is shown at the receipt as “juice”. This looks as an attempt of tax fraud, as while energy drinks are subject to 23% VAT, juice is taxed only at 5%…

Well, what I can say: not everyone can get a cosy job in a board of directors of some state controlled company, some have to try to make some money hard way (although, apparently, hard and honest work seems to be indeed a rare occurrence in PiS circles, so perhaps we can understand those bonuses for Beata Szydło’s government better now). But while PiS seems to be of the opinion, that public money belongs to them, they do not stop there. As they took over jurisdiction over Piłsudski Square from Warsaw council, they apparently consider it to be their own yard now. Not only they are building a Smoleńsk monument there, but this traditional place of the major event seems to be reserved for PiS-related events only. The government just refused without to allow for annual celebrations of National Firemen Day to take place there, even though they have been held at Piłsudski Sq. for years and 2018 is special due to 100th Anniversary of the Voluntary Fire Brigades… No reason for this refusal has been given.

They take what they want, and secure their gains by changing the laws. The only hope is in that Poles will find the way to go around the law. They are trained to do that at every possible opportunity, as they are becoming more and more absurd every day – just look at the new law that allows drivers of electric vehicles to use bus lanes and park for free. How you park for free then? You just ignore parking meters, then, after the parking fine is issued to you, you appeal it, and it is revoked. Logical, eh?

No wonder, that a Pole will always find the way, as proved by this picture, that had recently circulated in Polish internet. The sign says:
“ADVERTISING OF E-CIGARETTES IS ILLEGAL” and then, below “More information in the e-cigarette shop over there”.

With such a creativity, there is still a hope. I am sure that we find a way around even the most stupid laws introduced by PiS. But then, will we know, when to stop?

This piece was written for Britske Listy
Picture: Iga Lubczańska via Flickr, CC 2.0