Those who love beautiful Gardens can enjoy truly wonderful choice in Scotland: numerous botanic gardens, private gardens, castle gardens, gardens maintained by National Trust of Scotland – everyone can find something to his taste. There are also some gems, that will please people, who look for something completely different. Places that are more of a gems of landscape architecture than gardens, created by a world renown post-modernist architect Charles Jencks. Two of those can be found in Dumfries and Galloway, proving that tourists who rarely go to this part of scotland miss a lot.

The first one from those gems is a garden surrounding Charles Jencks’s own house. On the 12 hectares around his residence a significant earthwork was undertaken, creating an surreal landscape inspired by the most recent developments in cosmology, physics and math. It’s called The Garden of Cosmic Speculation. 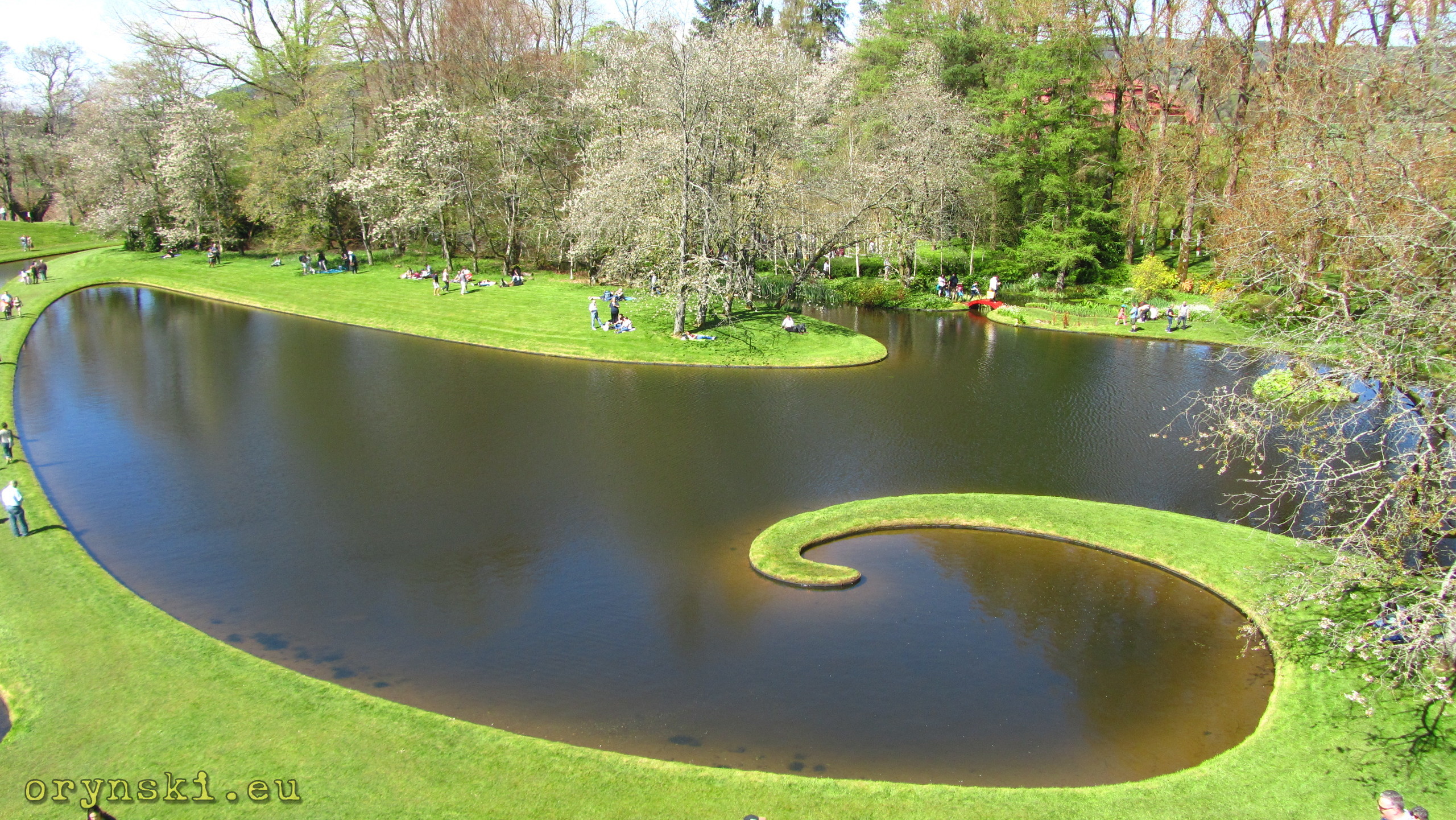 It is a very diverse project. While in parts it is a perfectly traditional garden, in other there is something like from the outer space. Just next to a small orchard there is a mound with a spiral paths leading to its top, from where you can watch a strangely shaped mounds on the meadow ahead, or a strangely shaped pond with spiral-like peninsula. 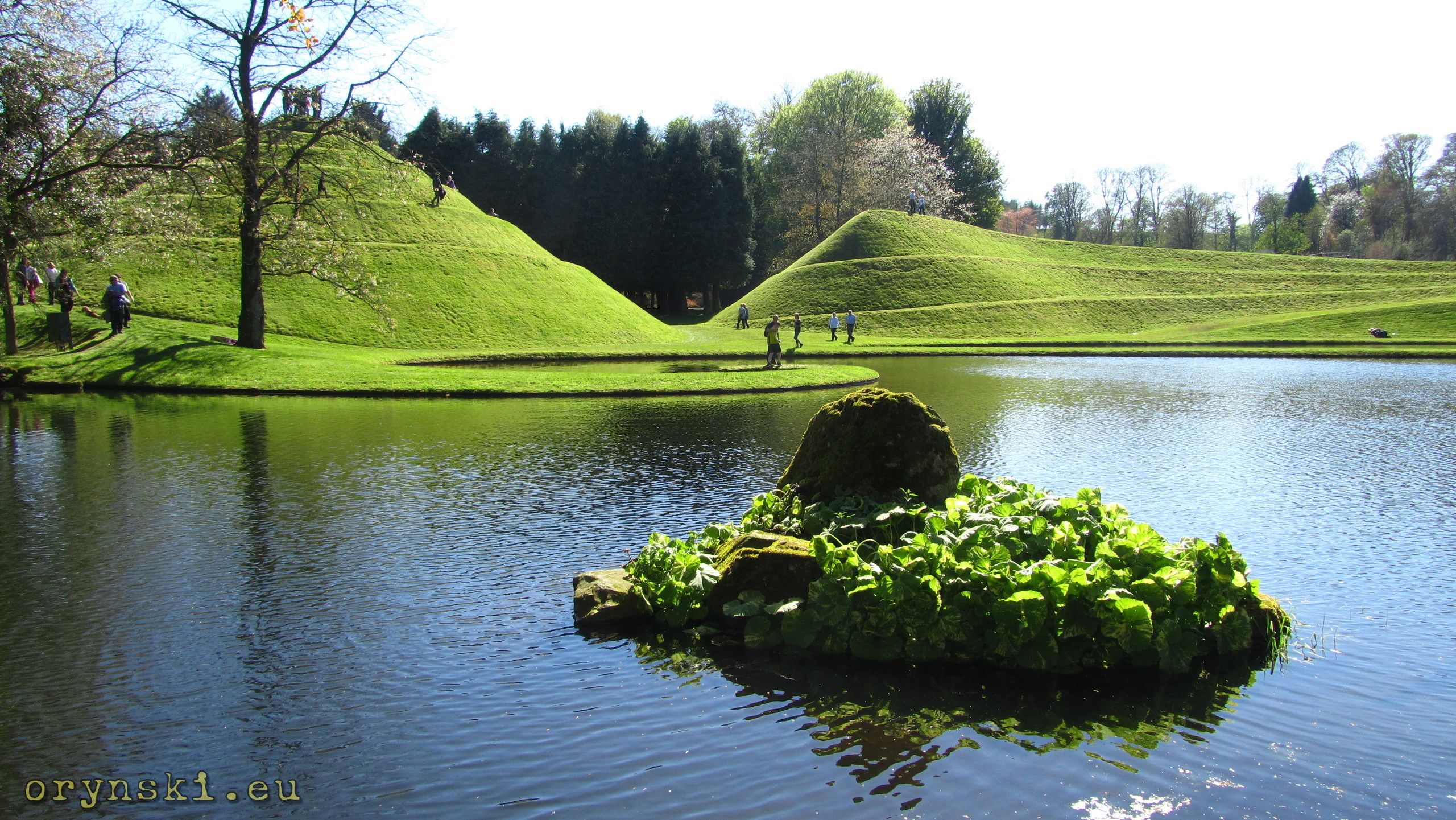 On the other side of the farm building there is a small flower garden full of interesting sculptures: 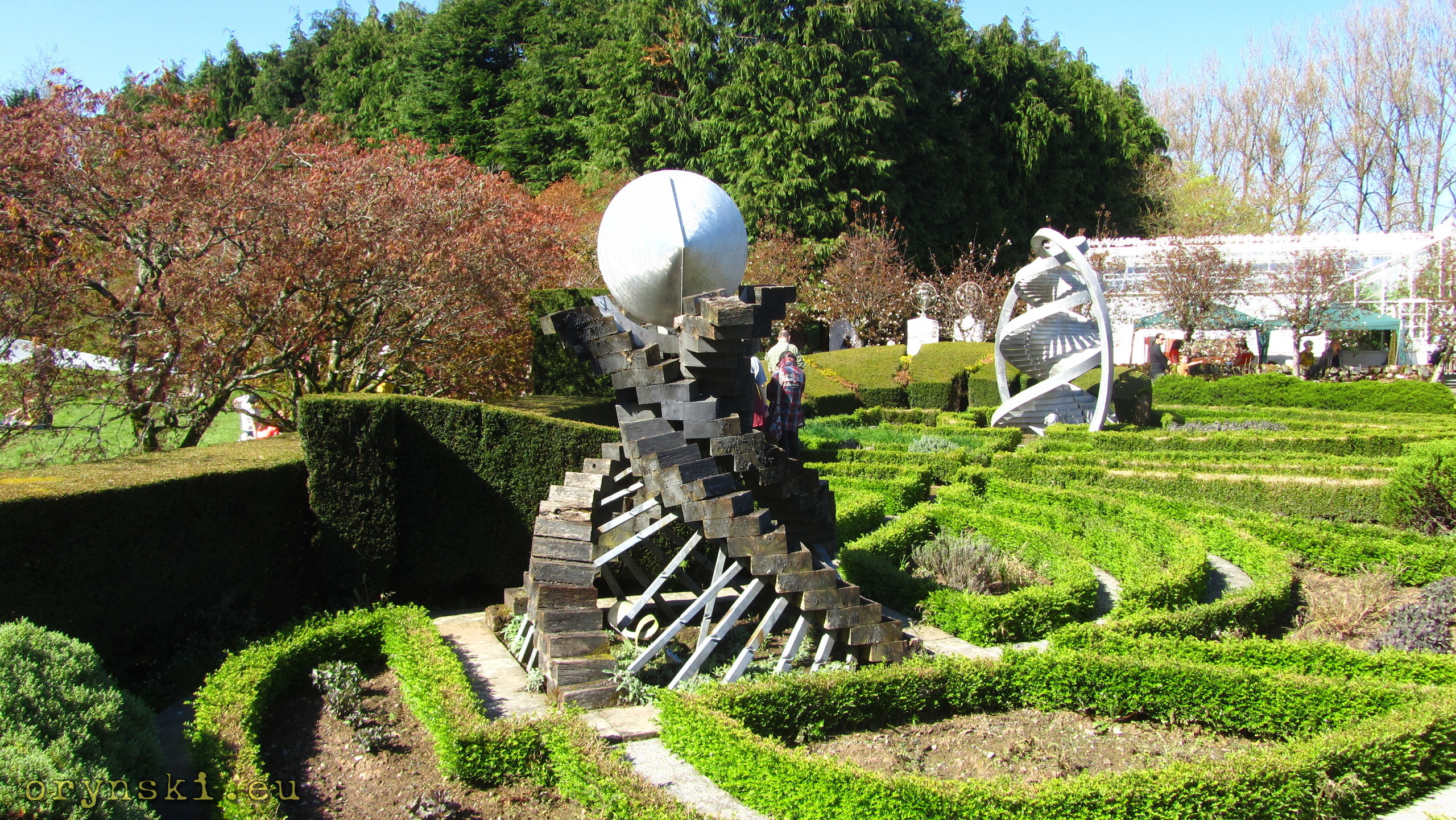 On the back of the house there are stairs, that flow down the hill like a concrete waterall right to the surface of another pond: 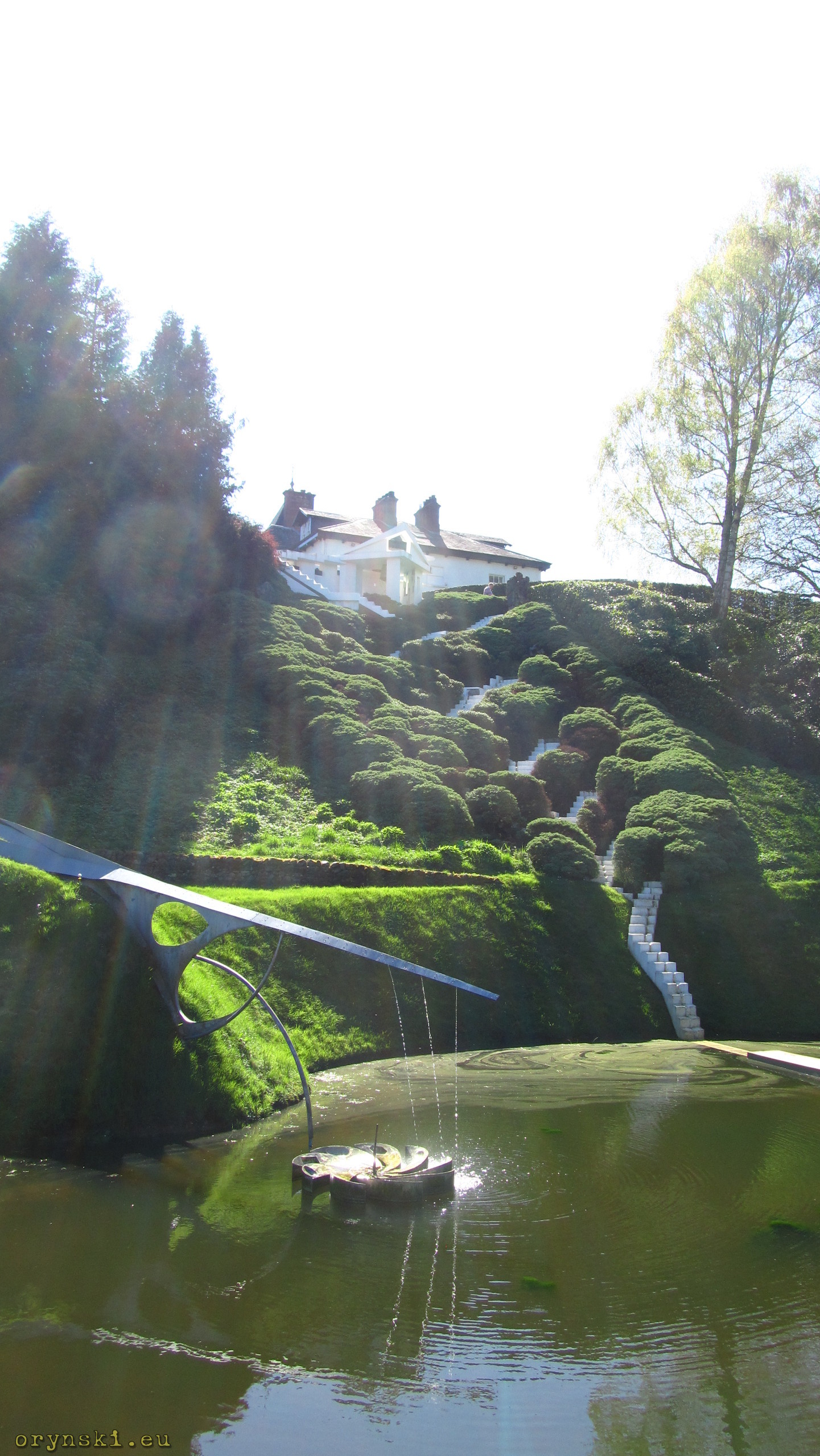 Across the whole garden one can find signs, sculptures and instalation inspired by most recent scientific discoveries, but if you are a physicists, you might find those a little bit pretentious. But don’t worry, as if you need to clear your brain from this pseudo-scientific mumbo jumbo, or if the modern art is really not your thing, you can rest on the buttocks of a giant arse covered by grass that is to be find in the corner, next to the railbridge. Or you can simply let your eyes enjoy the beuty of a strange geometric shapes that are to be found all across the garden: 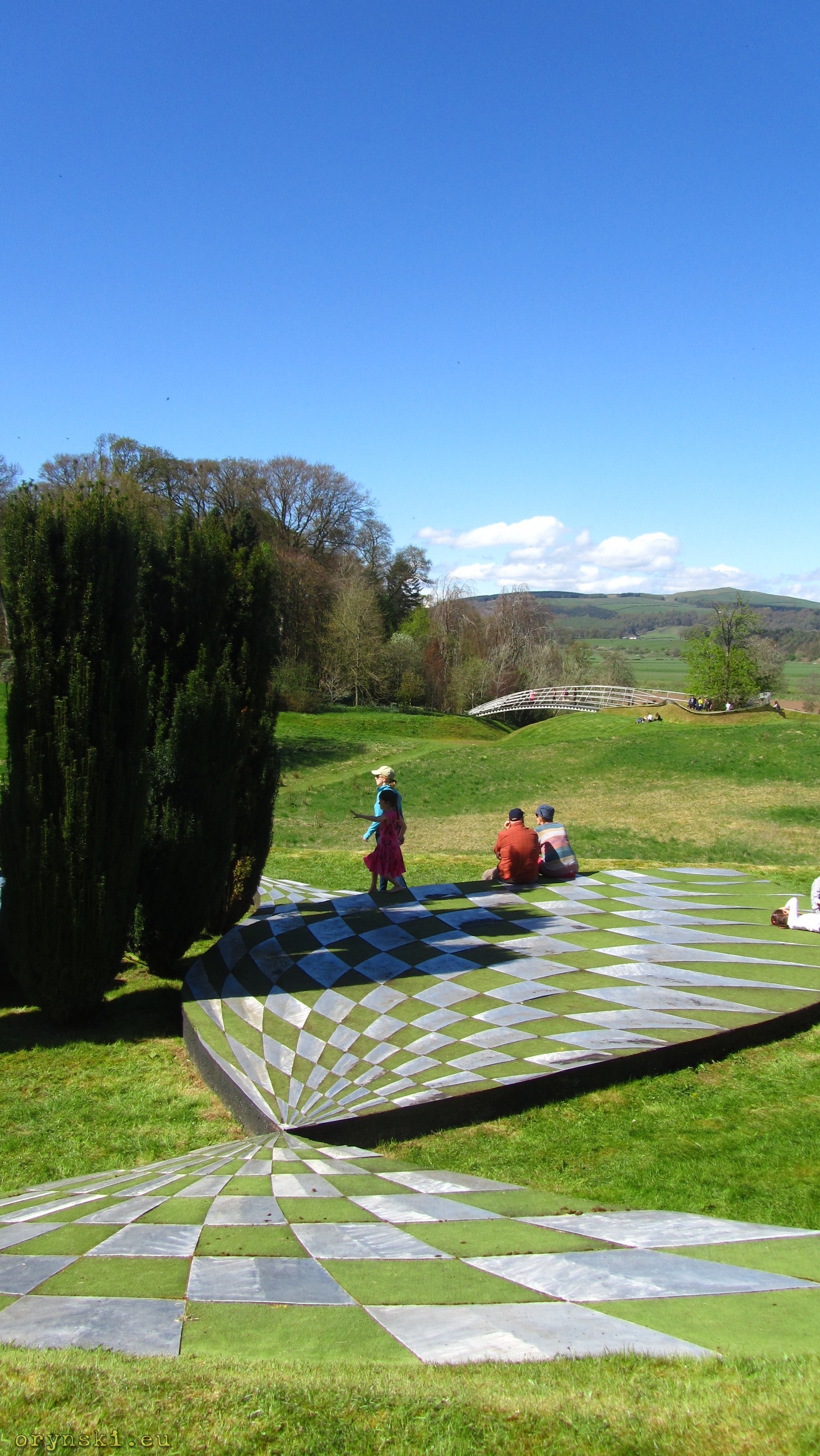 One has to remember that it is a botanic garden. Those looking for extensive collection of exotic plants might be a bit disappointed, as most of the area is basically a strangly shaped lawn. But the garden definitelly leaves an impression and you can spend long hours there, searching for a hidden gems or observing the same elements of the garden from different perspectives. Surely it would be great just to lie in the grass and enjoy the beauty of this place, but this is quite difficult if you are not a family member, because this garden is open to the public only for one day every year – to raise money for charity as a part of Scotland’s Garden Scheme – therefore most likely you are going to share this experience with a significant crowd.

Luckily just a short drive north, just past a small town of Sanquhar, there is another masterpiece by Charles Jencks. It’s Crawick Multiverse – a monumental landcape project taking the former site of the open plan coal mine. Here at more than 22 hectares you will find plenty of astronomy-inspired objects such as two mounds with spiral paths that depict Mikly Way and the galaxy of Andromeda. 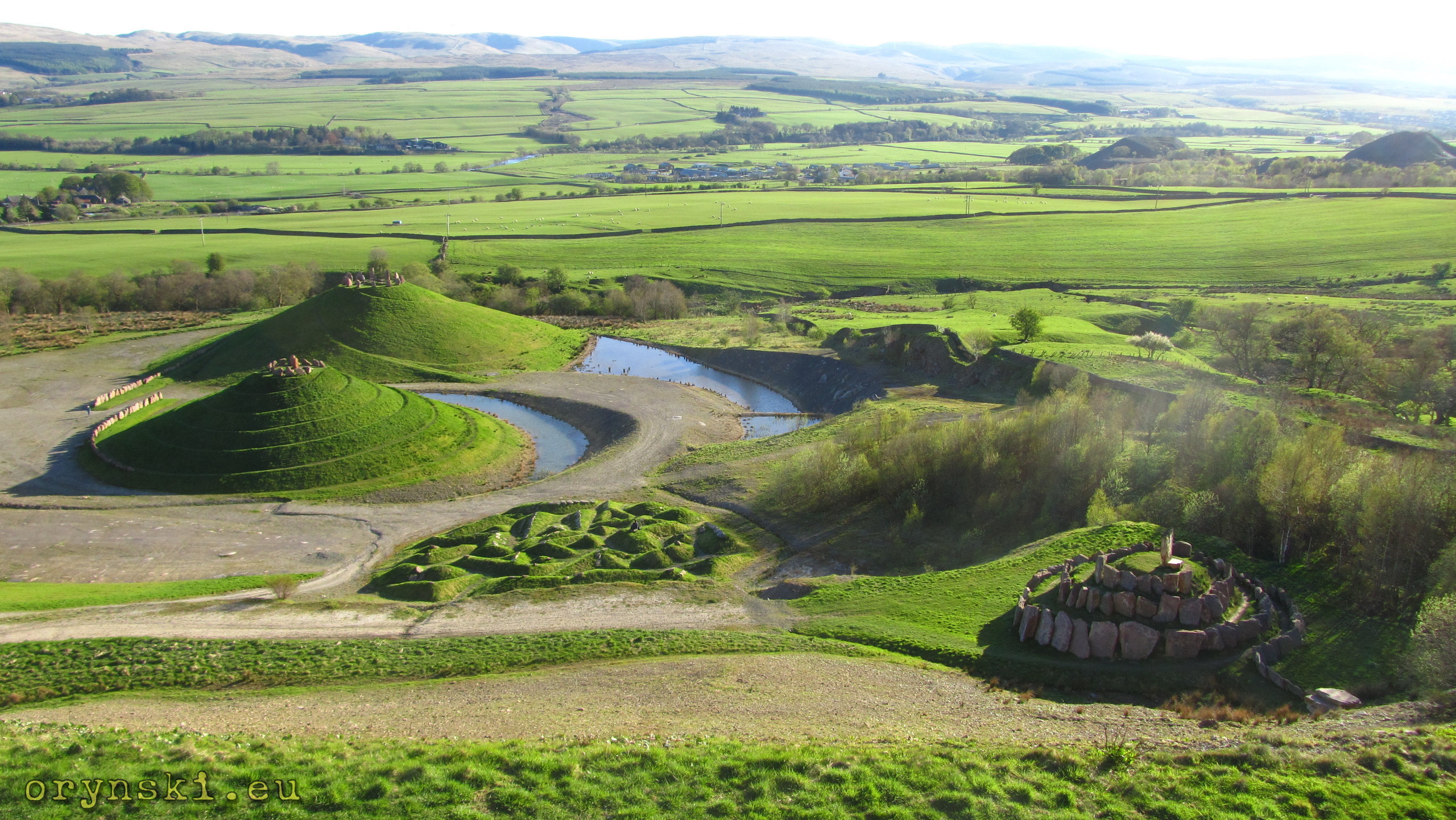 Amongst numerous object we can find formation inspired by astronomical phenomenae, but also those inspired by prehistoric astronomers who created such places like Stonehenge or Callanish Standing Stones in Outer Hebrides. And the whole Multiverse is cut across by a alley of mehhirs leading exactly from the south to the north towards the highest hill, from which one can enjoy a beautiful panorama of the project and its surroundings. 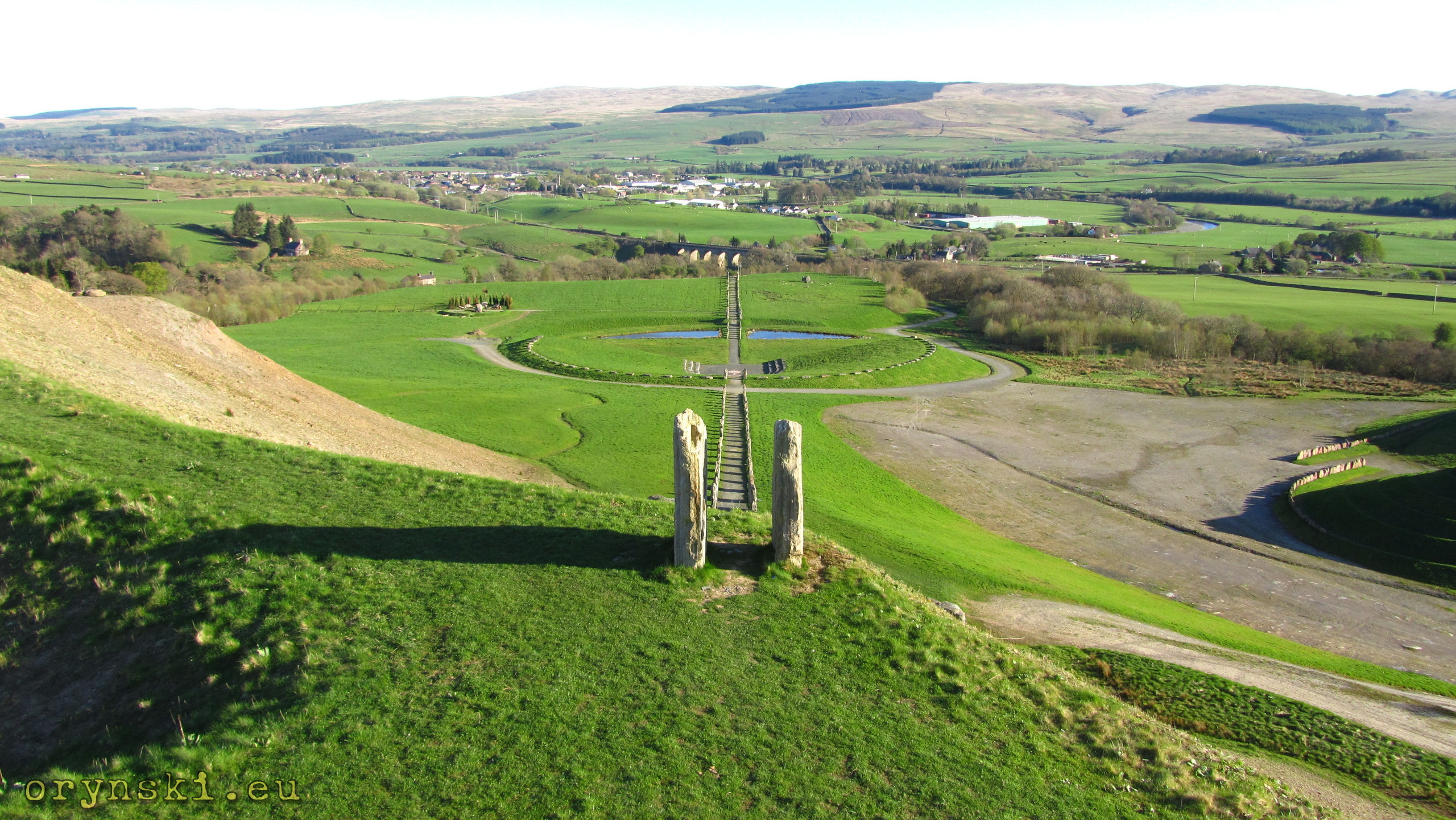 In the centre of the Multiverse there is a huge amphitheatre with the capacity of 5000, in which celebrations of sumer solistice and other events can be held. The whole thing is just simply amazing and has the advantage, that being open the whole year and far away from major tourist routes, there is a significant chance that you’ll have the whole Multiverse to yourself.

Both places depicted in that piece are to be reached in less than two hours by car from Glasgow, Edinburgh or Newcastle-upon-Tyne, and in the less than one hour from Carlisle. On a day where Garden of Cosmic Speculation is open for public, you’ll find enough time to comfortably visit both locations, but even the Crawick Multiverse only is worth a one day excursion.

During the opening hours of a visitor centre, the entrance to Crawick Multiverse is at a small fee, but at other times one can freely explore the area.

Lanscapes designed by Charles Jencks can also be find in other places, including Jupiter Artland near Edinburgh