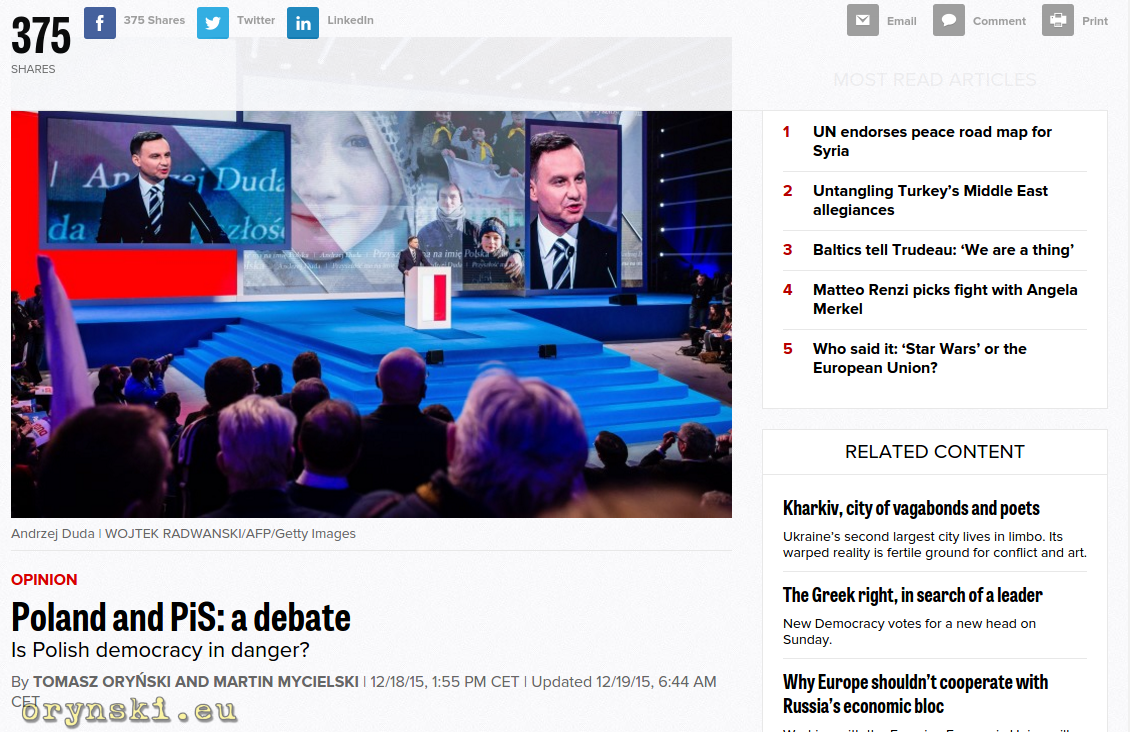 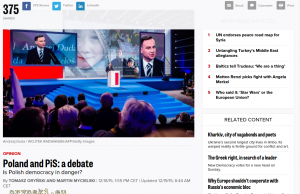 In his recent article in Politico, Adrian Karatnycky calls for Poles to “Give PiS a chance.” They did give PiS a chance, when they elected the party to power about six weeks ago, and it was enough for PiS to completely squander this mandate of trust. The thing is that Poles just don’t trust the PiS government any more.

Over the last two decades, two different narratives have emerged in Poland. The mainstream one sees Poland as a success story, a country that, after breaking free from communist domination, leads its neighbours in their successful chase after the rest of Europe.

The other paints the 1989 round table negotiation as a mere shift of power to new elites, including former security agents from the communist regime and traitors from the Solidarity camp. Jarosław Kaczyński has always been a leading light for people who believed the last 25 years gave only illusion of freedom. They are the same people who believe the Smoleńsk plane crash, in which president Lech Kaczyński, Jarosław’s twin brother, died, was an assassination. It’s the ultimate proof, they say, that the establishment is so desperate to hold its position that it will even conspire with Putin to kill the president himself!

This second narrative has allowed Kaczyński to build a strong following that will uncritically accept his every word. He is seen as the nation’s only saviour – but only by about 20 percent of Poles. And as he sorely learned a decade ago, he is unable to force changes without a single majority in the Parliament. He needed to change tactics: He had to get rid of the perception that his party is a para-religious sect of conspiracy theory believers, and position it “on the market” as an ordinary, mainstream conservative party. The recent elections prove that he succeeded. But as soon as he secured his majority in the Parliament, the mask came off. So let’s see what was hidden behind it.

“[PiS] leaders represent a spectrum…” Karatnycky writes. But there are no “leaders” in PiS. This party has only one leader, and it is Jarosław Kaczyński.

Everyone who had even a slim chance to threaten his position was either removed from the party, or forced to leave on his own account. The PiS political cabinet is like an army of faithful parrots who repeat the slogans provided by the party press office. The only one who has some degree of independence is Antoni Macierewicz – and probably only because he does not seem interested in a leadership position.

Karatnycky’s next statement also fails to give readers a full picture: “Many PiS leaders were heroes of Solidarity’s struggle for freedom, while others were heroic dissidents of long standing, who spent decades in the fight against Communist rule.” Although this can be said to be true for Antoni Macierewicz, Kaczyński’s merits in the fight against Communism do not place him among the main players. His actions weren’t significant enough to get him arrested on the first day of the Martial Law in 1981, when all major figures from the opposition were either arrested or forced underground. This is why history is so important for PiS: By smearing the real heroes of the Solidarity era like Bronisław Geremek, Lech Wałęsa, Adam Michnik or Henryka Krzywonos, they made space for the new legend built around the personality of late president Lech Kaczyński.

But the true perversity is that PiS is now the most significant post-communist group in Polish politics. While the direct successor of Communist Party, the Democratic Left Alliance, is in demise and the narrative on the left is now dominated by young socialists, PiS gave shelter to a surprising number of functionaries of the communist regime. When Jarosław Kaczyński speaks about taking Poland away from the hands of “children of former communist activists,” has he forgotten that key positions in his own government are held by these same people?

And what about the new generation of the PiS activists? Well, their job is to be obedient, quiet and… disposable.

Kaczynski’s most obedient follower is of course President Andrzej Duda, who, according to vast majority of legal experts, has broken the constitution at least a couple of times. Yes, he might be “educated in Poland’s elite institutions,” but those very same institutions have now appealed to him to abstain from his illegal actions. Professor Jan Zimmerman, who supervised Duda’s PhD studies, did not mince words: “I deplore, that my apprentice, President Duda, is breaking the constitution”.

Karatnycky speaks of a “distorted narrative” on the matters about Constitutional Tribunal, but fails to convey the true story himself. Yes, it’s true that the previous Parliament elected five new judges, including two who were elected “in advance” thanks to recent change to the legislation. The tribunal ruling on December 3 was clear: while the election of two additional judges was illegal, three others were elected in line with the Constitution and should have been immediately sworn in by the president.

On December 9, the Tribunal adjudicated about the further legal changes that PiS made during a late night marathon November 25, and, in principle, found the election of five new judges to replace the ones elected by the previous Parliament illegal. The Tribunal once again stressed the fact that three out of five judges elected by the previous Parliament should be sworn into office. President Duda still refused to do so, thus breaking the constitution.

Karatnycky states,“On December 9, the Polish constitutional tribunal ruled that both PiS and Civic Platform were partly to blame” but this is far from the truth. The Tribunal’s role is not to decide who is to be blamed for what. Its only prerogative is to resolve whether the particular act is in line with the constitution or not. The tribunal rulings are final and binding.

The December 3 ruling shows the important role of the Constitutional Tribunal as a guardian of the constitution: It is there to protect the country from such actions like the “overreach by the previous, Civic Platform-led Parliament”. This is the very reason why PiS sees hijacking the tribunal as its major aim: The party’s plans to reform the country require drastic changes and new limits to civic freedoms that were clearly indicated in their “project of the constitution” (PiS project of the constitution was taken down from their website during the campaign in order to avoid scaring voters, but it’s copy remains to be read here). Having not secured the required majority to change the constitution, Kaczyński had to resort to plan B and try to remove the main obstacle: the Constitutional Tribunal.

By hijacking it, or at least paralyzing it with legal tricks, he is trying to lay the groundwork for the controversial changes he intends to introduce. According to the rule of presumption of legality, the new legislation is deemed constitutional and binding until questioned in a Tribunal. This is also why the procedural mistakes committed both by PiS and Civic Platform during the process of electing the judges are not a major issue here. PiS’s desperate stunt of introducing a new interpretation of Polish grammar also fails to address the real problem.

On the issue of censorship attempts by the Minister Gliński, Karatnycky misses the point completely. Attempts to halt the theatrical performance of Elfriede Jelinek drama were a cowardly attempt to influence the theatre’s program. The letter to the local government read, “the Ministry of Culture and National Heritage is not going to influence the freedom of artistic expression … [but] the Minister expects, that you will immediately stop preparations to the premiere of the piece in its announced form.”

The real scandal happened during the minister’s interview on public television, where he very rudely ignored the host’s questions and continued to deliver a previously prepared speech. Irritated by the journalist’s persistence, who still demanded answers, Gliński accused the TV station of “carrying on propaganda and manipulation for the last few years.” His promise to put stop to it, along with an earlier suggestion from PiS members of purges in public media, should be taken seriously in light of the fact that the journalist was suspended almost immediately after the interview.

One has to remember that even under previous government artistic freedom was already under threat from the influence of the Church.

Last but not least, the case of Mariusz Kamiński. The facts are clear: Kamiński was sentenced to three years of imprisonment and barred from taking public office for 10 years. In a radio interview in May, he said the only thing he is interested in is to be “fully acquitted” by the court of second instance. By pardoning him, President Duda not only deprived Kaminski of the chance to prove his innocence (since only criminals can be pardoned), but also broke the constitution, by robbing the courts of the chance to investigate the matter and thus ignoring the basic principle of separation of powers.

By refusing to swear in three judges elected by previous parliament despite the Tribunal’s ruling, President Duda again put himself above the constitution.

The case of Kamiński shows another weakness within PiS. Is its pool of professionals really so meagre, that they have to pardon alleged criminals in order to fill government positions? The proposed changes to the rules on appointing public servants suggest this might be the case: Candidates will no longer be required to possess relevant qualifications or experience and the ban on civil servants’ membership to political parties will also be removed.

Karatnycky calls for us to “give PiS the chance,” but Kaczyński already knows that within a month he has lost the support of the nation. He might still entertain his followers, by calling the opposition “traitors,” “commies,” “thieves,” and the “worst sort of Poles,” and comparing them to the German Gestapo, but he knows that the only way to retain his position is to dismantle the state institutions. He knows that although Poles gave him a chance in 2005 and then again this year, he won’t get a lucky a third time.

He will do everything to hold onto power. Given his proclivity to rule from the back seat via proxies, he won’t be the one to face the State Tribunal if PiS is defeated. Voices of alarm that can be heard not only in Poland, but all across Europe and the United States, should thus not be discounted merely as slander.

This is a full version of my polemics with Adrian Karatnycky’s piece on Politico.
For editorial reasons my answer had to be shortened by more than 60%, but they had no objection for me to publish it in full on my website.

The noise of PiS’ barrel organs

PiS is crossing the Rubicon

Tens of thousands of people protested on the streets in Poland. What is their anger about?
Poland Politico politics