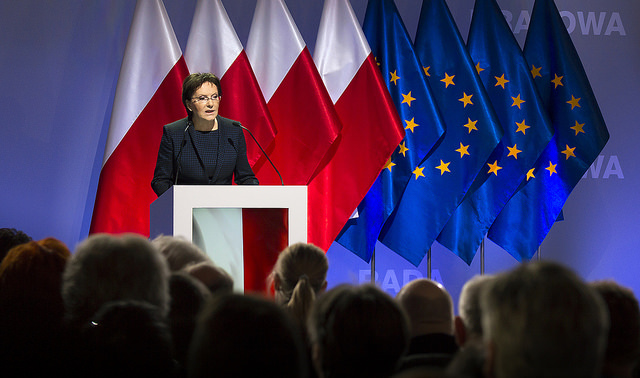 Although Donald Tusk claimed that he is not interested in any positions in European Union as he still has a lot to do as a Polish prime minister, when it was announced that he is to become next President of the European Council nobody in Poland was surprised. The eyes of everyone turned at his deputy prime minister Elżbieta Bieńkowska who was a chief of the huge Ministry of Infrastructure and Development as she seemed to be a natural succeeder to Tusk. To everyone surprise though, this popular down-to-earth lady, who came to politics as a Civil Servant and according to the polls would be a favorite choice of Poles for their next prime minister, is also moving to Brussels as European Commissioner for Internal Market, Industry, Entrepreneurship and SME.

The New Prime Minister became Ewa Kopacz, hitherto a speaker of the parliament. It was an unexpected move, as she was seen mostly as a Tusk’s faithful adjutant and not as independent politician and therefore her nomination sparkled expectations that her government might be just a facade for Tusk’s involvement „from the back seat”. Surely this provided an ammo for the opposition, notably Prawo i Sprawiedliwość, that suddenly found themselves without a ground to stand. Prawo i Sprawiedliwosć rhetoric so far was mostly repetitive accusations of Donald Tusk being the worst prime minister, mediocre politician and laughing stock for the whole of Europe. The role designated to him by the European Community and praises of his responsible politics as a prime minister, coming from all over Europe, strongly contradicted PiS claims. At the same time PiS loosing itself in bashing Tusk in every way possible and blaming him for all imaginary and real troubles in the country, neglected the other ways of criticizing the governing Platforma Obywatelska party and after Tusk’s international success seemed to be a bit lost. A shy attempts to invoke long forgotten tape affair or to belittle President of European Council position as a “purely decorative” could be heard but clearly the opposition had no idea how to react to this new development.

Ewa Kopacz nomination helped them out and now the whole fury is concentrated at pointing her real or imaginary flaws. She found herself under a heavy wave of criticism even before she announced the composition of her government. Some of the claims went as far as to suggesting her involvement in the “assassination in Smoleńsk” thus making her indirectly responsible for the death of the late president Lech Kaczyński. Meanwhile her personal choices seem to reflect her attempts to differentiate her line from that of her predecessor, sometimes to the extend that are commonly seen as a gross mistakes, such as change at the position of the Minister of Foreign Affairs. Under current circumstances with Russian involvement on Ukraine and possible war in the Middle East replacing efficient and well recognized Radek Sikorski with Grzegorz Schetyna might seem like a unwise thing to do. While for Radek Sikorski technically becoming Speaker of the Parliament is a promotion, many people feel that he was send to exile from important matters of the international politics. At the same time critics of Grzegorz Schetyna point out his poor language skills and lack of international connections, but forget to notice that for last three years he was a head of the International Affairs committee in the parliament. Last but not least, he is often perceived as a quiet opponent of Tusk, quietly mounting his own fraction within Platforma Obywatelska – many people draw comparitions with Frank Underwood, a character from the TV series House of Cards – so his rise to power is often seen as a beginning of war over Tusk’s legacy.

One thing is sure – running the country for the year remaining to the next election is not the only weight resting on her shoulders. Tusk’ success effect, that was clearly visible in the polls, will not last forever and it’s her efficiency as a prime minister and resistance to attacks of the opposition that the fate of Platforma Obywatelska in next years election lies upon.

Text was published in Czech in Britské Listy

On outcome of Polish local elections.