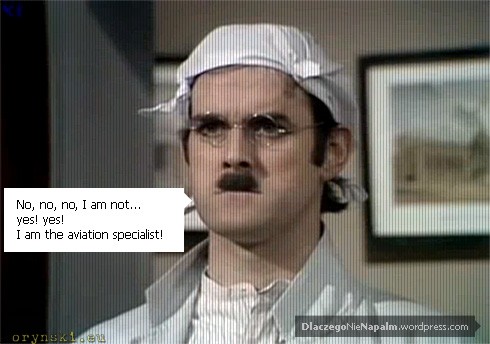 One of my readers e-mailed me with question why I am not writing about Polish politics for Britske listy any more. He said that there is so much going on in Poland and that the coverage in Czech media is pretty chaotic. The fact is that I gave up covering this events not only on Britske Listy for this very reason: nobody can really make anything out of what is going on in Poland. The events there would work better as a screenplay for the new episode of Monty Python Flying Circus than to a respectable paper…

But OK, answering popular demand let’s try to sum up events of the recent weeks.

1. On the Constitutional Tribunal crisis: all reputable experts and institutions – from Polish legal associations through universities to Highest Court, and from Venice Commission and European Institution to US Senate commissions condemned PiS’ attempts to paralyse the Tribunal. Yet PiS seems to be stuck like broken record on constantly repeating “It’s all Platforma’s fault” and quoting opinion of some of their own “experts”, who in most cases are their own politicians or lawyers that make money on representing PiS people. The whole situation reminds me of old joke about blonde driver, who hears in her car radio that “some idiot drives wrong way on the motorway”. Trying avoid yet another oncoming car she curses “One idiot? There are hundreds of them!”.

2. On the front of the protests: Komitet Obrony Demokracji regularly organizes protests in the towns and cities all over Poland. While they seem to lost momentum, mostly due to mistake they made by allowing compromised politicians of the previous government to join them and marching side by side with .Nowoczesna party, the protests are still huge and gather tens of thousands of people on regular basis – here for example is a movie showing recent KOD protest in Wrocław:

Social democratic party Razem also staged their own protests in a very smart way: they displayed verdicts of the Tribunal on the wall of the government buildings.

3. One thing PiS is successful is to make more and more groups of Poles angry. Now by attempting to tighten the abortion laws (that are among the strictest in Europe already) they prompted thousands of women to march on the streets. Tinkering with abortion laws is just one of the many symptoms that PiS tries to pay their debt to the Catholic church for supporting them over many years. The other example is the new law on farming law, banning non-farmers or big farm companies from acquiring new land. The outrageous way of how it is worded means that it will not only be possible for people from the city to buy a small farm with a little land and settle there, but it also makes impossible for children of farmers that had chosen different career to inherit their parent’s land. Unless they are priests, that is, as Catholic Church, who is already one of the biggest landowners in Poland, was made into an exception. So if your father was a farmer and left you some land, you cannot have it, even if you wanted to drop what you were doing and become a farmer yourself. Instead the land will be force-bought from you by the government institution at the price set by local clerks of the government agency that deals with farmlands.

4. … which means – by PiS. As PiS has began with dismantling the law on Civil Service that required civil servants to show certain skills, qualifications and experience, thus allowing themselves to purge every single institution from supporters of the opposition. Nothing was spared, and the example of the Arab horses studs that had it’s reputation literally destroyed overnight is just a tip of the iceberg. And apart of the fact that our Civil Service, that Poland was building for the last 25 years with so much effort was destroyed virtually overnight, this is like a cosy glasshouse for nepotism and corruption.

5. Apart from purges carried to ensure that every significant post from a parish council to the chairman of the biggest Polish oil company Orlen is secured by the PiS representative, there is a huge drive for revenge. Leading prosecutors, who were engaged in investigations against some PiS members are being transferred to some provincial regional prosecution offices to deal with petty crimes. Military prosecutors, who were investigating Smoleńsk plane crash were removed from the military justice system altogether and assigned to some forgotten tank battalion in the middle of nowhere. A military spokesperson claims that “it is perfectly normal, as soldiers cannot held one function for too long and they need changes”. Does it means that we will soon witness a submarine bosun flying our F-16, nurses fixing tank engines and army cooks dismantling explosive devices?

6. But if you are afraid about the impact of those actions onto the Polish army military potential, rest assured that everything is all right. The Ministry of Defense, paranoid Antoni Macierewicz, who is a leading preacher of the conspiracy theories regarding Smoleńsk crash, is working on establishing Territorial Army that will boost Polish defense system by “basing it on the Christian and Patriotic foundations”. It is beyond my understanding how the fact that this “paramilitary organization” will be equipped with machine guns “to deter anti-government actions” fits into those Christian values, but obviously I am not an expert on the military field. Meanwhile those of the highly training members of the armed forces, who weren’t classified as the “worst sort of soldiers” yet, decide to leave the army in their hundreds. This also happens in the police or the local prosecutor’s offices. I guess it is all for the better, as they weren’t Christian enough perhaps?

7. On the media front – after take over of the state TV and turning it into a propaganda machine, the ratings of the (until recently) leading news program – main edition of Wiadomości – have fallen dramatically. And despite the fact that many people who never watched it before started to do it and consider it as an entertainment show as impudent lies (and maybe more importantly – omissions) broadcasted create a surrealistic picture on the backdrop of the amateurish work of the new leavy of “trusted journalists” (that is some semi-amateur right wing bloggers, YouTube stars and publicists of the right wing papers) that took places of those experienced ones who worked there before. Jacek Kurski, a “Kaczyński’s bullterier” as he proudly described himself in the past, obviously has no idea on how to create a modern TV station, therefore he turns back to the past, hoping to gain viewers who want to go down the memory lane. The return of the most popular shows from 1980’s and early 1990 was announced. Some are already on air, but the fact that rebooted version of the cult popular-science program Sonda lost half of it’s viewers after first chapter is not encouraging. To punish media that are not openly supporting PiS all the public announcements and adverts of state owned companies are being diverted to the PiS-friendly media only – which is a doubtful decision, as the whole point of publishing public announcements in most red papers is to reach as much readers as possible, and moving them to some right-wing niche papers seems as a counterproductive thing to do… Zbigniew Ziobro – a justice minister AND chief prosecutor in one person (and, incidentally still an MP despite the fact that one person is not allowed to be a prosecutor and an MP at the same time by art. 103 paragraph 2 of the Polish constitution) banned all public institutions from subscribing the most read papers and magazines in Poland – Gazeta Wyborcza and Polityka.

8. Meanwhile, we were one step from another national tragedy that would be surely exploited as another example of the anti-Polish actions by certain forces. A presidential BMW had a tire blowout on the motorway and landed in the ditch. Nobody was seriously hurt, but of course conspiracy theories sprung from everywhere like daffodils in the spring and the PiS politicians managed even to blame previous government for that. A presidential driver was quickly acclaimed a hero for saving presidential life, but the case was quickly shushed down after it emerged that government drivers actually behaved like total idiots on the road – it was filmed by a random traveler and uploaded on Youtube:

They traveled well over speed limit, overtaking on the bends and forcing other road users to leave the tarmac in order to avoid head on crash with the presidential column. Soon after public also learned that armored presidential BMW was fitted with discarded tire awaiting recycling, as someone failed to order new tires on time and president really wanted to go skiing (as, with no new controversial laws to be signed in the middle of the night and no serious foreign politicians willing to meet him, he has pretty much nothing to do). And as PiS replaced an experienced security officers that were protecting previous president, it came at no surprise to anyone that they no longer cry for punishing persons responsible.

9. On the international front there is chaos. Foreign Minister commits a blunder after blunder, Justice Minister for some reasons thinks that he is entitled to lead his own foreign policy as well and he writes letters in bad English lecturing and abusing EU and US politicians who happened to criticize actions of the new PiS government. PiS claimed that Beata Szydło government will bring a new foreign politics to ensure that “Poland will get up from it’s knees”, but so far the only possible summary is that of one of the internet commentator: “It seems that when Poland was getting up from it’s knees it badly hurt it’s head by hitting it in the edge of the table”. Well, one thing is sure: the days that we were respected member of the European family that had something to say are now gone and unlikely to be back anytime soon.

10. And this is only politics. In the economy Poland ratings were lowered, foreign investments cancelled and the health service and school system have been put in limbo after drastic reforms to both were announced and then no action taken. Meanwhile in the society divisions are even deeper. Nationalists, racists and all right wing extremists are raising their heads. People of colour are beaten on the streets, on the manifestations effigies of Angela Merkel and a Jew are being burned. The other half of Polish society looks with astonishment at politicians, who claim for example, that abortion should be made illegal even in rape cases, as many children born after their mother were raped by German soldiers during the war grew up to be good patriots… I haven’t seen any research on that, but while year ago some of my friends who live in Poland were thinking about emigration, now nearly everyone I speak with considers it as a serious option and some already began serious preparations. And I don’t blame them. I have recently read a Hitler’s biography. I would say that Poland is now somewhere where Germany was in 1934.

This article was published in Czech language portal Britske Listy

On outcome of Polish local elections.