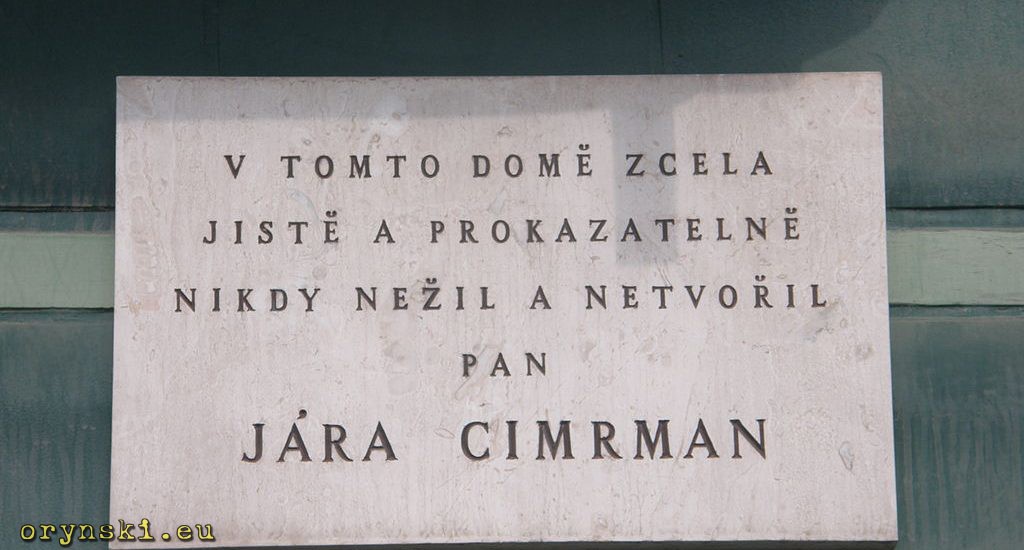 Finally, Poland has a worthy response to Jára Cimrman. Our Polish super hero is called Mateusz Morawiecki and was also participating in pretty much everything. Morawiecki is known for that with whomever he speaks, he is always telling the stories from his past to match. So if he speaks with farmers, he is telling them how much experience he has in milking cows and that from his experience with flail he knows, that Bruce Lee with his nunchaku would be no match for a Polish farmer. He also used to be a bee-keeper and when talking to railway workers he brags about being a bearer of a torch of a railwayman tradition.

Sometimes his stories are contested though. When he bragged that he has himself negotiated Polish membership in the EU, Leszek Miller, a former prime minister who actually did that, asked politely if he, at least, can wait for him to die before spreading such rubbish. But I guess it’s only jealousy of an old, bitter man, who can only dream of having such achievements in life as much younger Morawiecki. Recently for example it has emerged, that our current prime minister was a hero not only in Poland, but also on the international scale. According to himself, he was playing an important role in Velvet Revolution and helped to bring down communism in Czechoslovakia. “From the very beginning, in 1982, we have printed “Nazory”, an underground paper that was then smuggled into Czechoslovakia” wrote Morawiecki, who in 1982 was still in primary school. Then he moved to tell the story how he, as a young boy, was taking part in the actual Velvet Revolution, that, you might not know that, began in Wrocław, where he lived back then. So if you, our Czech brothers, are looking for someone to thank for your freedom, look no further: it was thanks to Mateusz Morawiecki who, as a 19 years old boy, went to some concerts of Czech artists and participated in intellectual discussions with leading Czechoslovakian dissidents.

No wonder, that under such leadership, Poland is going to do things worthy of other famous heroes. The most recent example is a situation in Polish Air Force, where after a crash of one of MiG 29 fighters (probably caused by poor maintenance) all Soviet made planes were grounded. And they remained grounded for so long, that every single pilot qualified to fly them saw his permits going out of date. The situation seemed problematic, but the army found a solution. Two most experienced instructors will fly two-seated fighter and then each will refresh the qualifications of the other one simultaneously. Then they will progress to train the others. Isn’t it a wonderful idea? Is almost like when Baron Münchhausen pulled himself out of the bog by his own hair!

Also TVP had some superhero material to show. They made a transmission worthy of a moon landing from the historical event: a first Pole went to the USA without a visa after this requirement was cancelled a few weeks back. But there seems to be a flaw in this well-directed show: the First Pole Without A Visa In The USA turned out to be a former PiS spokesperson and today a “journalist” of TVP, who went there at the expense of his employer. Which brings a question if his trip to the USA should be considered a business trip, as in that case he has entered America illegally, as those, who go there for work still need to apply for a visa as previously…

But it was not the only great event in which TVP played an important part in. After 12 year old Wiktoria Gabor won a Junior Eurovision festival, she was interviewed together with TVP’s chief Jacek Kurski. During the interview the reporter thanked Jacek Kurski for Wiktoria’s success, as her victory is just another proof of that TVP got up from its knees and it became a huge success.

Meanwhile the ultra-right wing television TV Republika promoted different kind of a hero. They have published material about an Italian man, who adopted a little girl with a down syndrome. The promotion was very brief though, as when they discovered that the man in question is gay, they removed material from their website.

TVP was also forced to make an U-turn. After their idea of organizing a Hogmanay night concert within the borders of Tatra National Park was met with a fierce protests of people and organizations worried about the protected animals who could be brought out from their hibernation by the noise, the station initial answer was standard smear campaign against the activists, but finally they agreed to organize the event in the centre of Zakopane, as in previous years. Of course there were no apologies issued to the people portrayed during main evening news programme as those, who tried to spoil fun for everyone…

U-turns seems to be a new element in PiS politics. As they no longer have comfort of ruling with absolute majority everywhere, they are sometimes met with something they are not used to: that democratic decisions are different than expected. A huge scandal took place in Sejm, when during election of members of the National Judiciary Council the vote was not going the way PiS wished to. One of the PiS MP’s was caught on the microphone of the speaker of the parliament, when she said to her “We have to cancel it, otherwise we loose”. The speaker, also from PiS, instantly interrupted the vote, saying that it is because the opposition MP’s reported that some of the voting machines were not working properly…

But what else is new? This seems to be a new standard of politics in Poland. Ministry of Justice bullies judges who adhere to the verdict of European Tribunal of Justice from 19th of November, in which the Tribunal advised Polish court to check, if the newly “reformed” National Judiciary Council can be considered a legal entity or not. A judge from Olsztyn, who as a first one adhered to this ruling and refused to progress the case until it will be established if the judge, who ruled on it in the first instance, elected by the politicised Council, can be considered a real judge or not. To do so, PiS would have to publish some documents, which they refuse to publish despite rulings of the Supreme Court of Administration. Instead minister Ziobro dismissed the judge from Olsztyn. But this is probably just a beginning, as more and more judges declare to adhere to European Tribunal’s ruling, and it is doubtful that the minister would be able to dismiss them all…

Nobody in Poland is even shocked any more that minister of justice openly breaks the law. It is becoming a norm. The papers report, that newly appointed (female) minister of employment is known for breaking the employment laws when she worked as a head teacher. The documents regarding the businesses of Marian Banaś, a man accused of corruption and making businesses with mafia, who also happens to be the head of Supreme Audit Office, were just made top secret for the period of 70 years!

Meanwhile cleaning after the elections continues. It turns out that everyone-but-PiS were right, when they pointed out that the budget cannot be stretched enough to realise PiS promises of extra pension payments for the elderly. Of course there is potential of extra budget income: Czech Republic for example is going to introduce digital tax, aimed at the internet giants such as Facebook. Poland wanted to do the same, but recently when Trump was too lazy to come to Poland and sent his vice-president instead, the Polish government decided that the only answer to this offence is to further brown-nose the Americans, so that idea was scrapped. In a result instead of taxing the strong and rich, the electoral promises are to be realised at the expense of poor and weak: a special fund created to help disabled people will now also be used to pay the pensioners. This of course sparkled an outrage, so PiS had to react swiftly: the name of the fund, “The solidarity with the disabled fund” was shortened to “the solidarity fund”. There you go, problem sorted.

But the new things in this term of the parliament is that the safety of pedestrians is to become one of the important topics. Some of the most charismatic MP’s from the new generation of the opposition created a parliamentary committee on road safety, which aims to tackle the problem of the dangerous Polish roads. And I only hope, that they will do better than Świdnik city council: When new parking spaces were placed in a vicinity of a pedestrian crossing, the visibility became very poor. Local residents complained about lack of safety, and the council decided to act by closing the crossing altogether. No crossing, no problem – and those three parking spaces are more important than the needs of hundreds of pedestrians…

No wonder, that some people decide to take matters in their own hands. After a small residential street in Warsaw became a popular shortcut during the rush hours, its residents expected wanted some traffic-calming measurements. Finally, after waiting for some years, they decided to deal with the matter themselves: they purchased some old bangers and parked them on their street. The cars are parked legally, but in such a way that they make it really difficult for the traffic to move smoothly. Drivers who got used to this shortcut complained, but the police found nothing wrong with the legally parked cars and refused to act.

Poles were always able to take matters in their own hands – and not only to act when the state institutions were not up to the task, but even more to act against the state if the state tries to act against them. It is good to see that this spirit is still present in the young generation: an infamous school ombudsman from Kraków, known for her fierce support of PiS and for constantly trying to impose her Catholic faith on schoolchildren, designed a survey, in which the students were to report on their teacher’s political views or if they shared something from their private lives with them. This ended in the mutiny as the students were not happy that not only the survey was focused on those topic along with only negative sides of their school life, but also it was full of grammar and spelling mistakes. The students decided to hack the system and flood it with thousands of useless answers, thus making the whole exercise futile.

And I am happy to see that, because we might have our own Jara Cimrman, we can behave like Baron Münchhausen… But our young are not willing to follow the steps of Pavlik Morozov.