So we are into the new year. It has begun with the 1873rd day of PiS rule in Poland. Over last days the government did everything to make sure, that we won’t forget that apart from other plagues, 2020 was the year in which the Polish legal system was completely demolished. From hostile takeovers of the most important legal institutions, through persecuting independent judges, manual handling of the prosecutor’s cases to ensure that nobody from PiS will see any charges to attempts of turning Police into some kind of Belarussian ОМОН-light.

Nobody even pretends anymore to be surprised when PiS repeats votes in parliament that did not go their way when political enemies of PiS are being persecuted on some trumped-up charges when state-controlled institution still slam hefty fines for breaking COVID-related regulations on opposition activists and journalists, which then are enforced by the tax office despite the fact that Human Rights Ombudsman, courts or even Sanitary-Epidemiological Inspection itself deem those fines illegal as introducing such limitation to freedom without calling the emergency state or going through an adequate process of introducing new laws is illegal.

What is not illegal, is ignoring COVID regulations by Jarosław Kaczyński, as he, and a vast group of his acolytes, visited his brother grave during the middle of lockdown in April. The prosecutors did well explaining to the organization who reported that visit, that while, indeed, social distancing rules were broken, there is no proof that any person present was infected, so nobody has put anyone in danger, so no crime was committed. And taking parts in religious events was part of their job, as PiS is “a party closely attached to Christian values”.

And PiS is not the only organization that knows it’s above the law. The other one is hunters, about whom I write regularly in that column. After one woman reported hunters for hunting illegally 50 meters from her house without any concern for safety regulation (and despite that her property is excluded from hunting grounds) the case was swept under the carpet. Even the fact that hunters were threatening her was no concern to the prosecutors, as according to them “they were merely warning her about the danger”. After she demanded action from the Head Quarters of the Polish Hunting Association, someone threw a brick through her window. On the brick someone wrote “this is your answer from PHA”. Again, Police do not see a need to take action, according to them all that happened was that a brick caused 30 zł of damage.

Ordinarily she could turn to Humans’ Right Ombudsman, but even that is tricky. His term of service ended months ago, but PiS still did not allow the new one to be elected. Probably because pretty much every opposition party or and dozens of hundreds of NGOs support one candidate, a human rights activist, and an experienced lawyer Zuzanna Rudzińska-Bluszcz. PiS could not tolerate on that chair someone who would truly protect citizen’s rights, because they know that she would have, for the most part, protect citizens from PiS. That’s why after 5 months of stale-mate they proposed their own candidate. And so, finally, they proposed the candidacy of Robert Gwiazdowski, an academic who postulated liquidation of the Human Rights Ombudsman. He is also known for mocking human rights activists, gender equality, or for willing to quit Istanbul Convention – the one tackling domestic violence and violence against women. He has a very peculiar approach to deal with the burning (no pun intended) issue of Poland having the worst quality of air in Europe: instead of a ban on multi-fuel stoves, where many Poles still get warm in winter by burning low-quality fuel or even rubbish, which, according to him, would be an attack on personal freedom, he proposes for the neighbors of such polluting house to sue its owner in a civil court. As per one of the most important discussions happening in Poland now – woman’s rights – he is against defining rape in the criminal code, because “the rules don’t really matter. Rapists will rape women anyway”. And as if for abortion, according to him, abortion is not the case of a woman’s freedom. “She had her freedom when she took her pants off” – he claims. A fitting candidate for the protector of human rights in the state ruled by PiS, won’t you agree?

And even if Poland does something right – for example, sending doctors and soldiers to conduct COVID tests on drivers stranded in England, they always try to take more credit than they deserve: For example by using government-controlled media to show that it’s a government that delivers humanitarian help to stranded drivers, not actual volunteers from Polish diaspora, local people and Sikh Charity organizations. (My reportage on the trucker’s ordeal in Kent has been translated into Czech and can be read here).

But the year has ended with a true firework display. The Government saga entitled “will Poles be allowed to celebrate New Year’s Eve” has more surprise turns than The Bold and Beautiful soap opera. So after we were informed that there will be a curfew on New Years Night and everyone will have to stay at home, the Prime Minister himself informed us, that this will actually be no curfew. More like appeal. But other organizations have already issued their information, and it’s a total mess:
– Minister of Health introduces curfew, then says he’s not.
– Prime minister said there is no curfew, but people to stay at home
– His office said that there is no curfew, but admits, there was an ordinance issuing it, so they don’ really know.
– Luckily, everyone, who has a basic understanding of law in this country knows, that such things can be introduced with ordinances, only with proper legal bills.
– Health minister says that those, who venture out will face 30 000 fine
– Speaker of the parliament says, that there is no curfew, although there might be fines, but surely not as big as 30 000
– Anyway, people should not to worry, because if they got stopped by the police, the officer will know if he is to fine them or not. And you still have to be able to walk your dog, right?

I am not sure what to make of it. I had not much time to put it through legal scrutiny, but it seems to me that there is a curfew, which the prime minister admits is illegal, so just politely asked everyone that it is legal and stay at their homes, while other members of the government see it as equally unclear, but they go ahead with prime minister’s wish to pretend that curfew is going to happen and will be trying to fine people. Or not. Honestly, I don’t know, but someone prepared a graph, perhaps you can make end and tails with it? 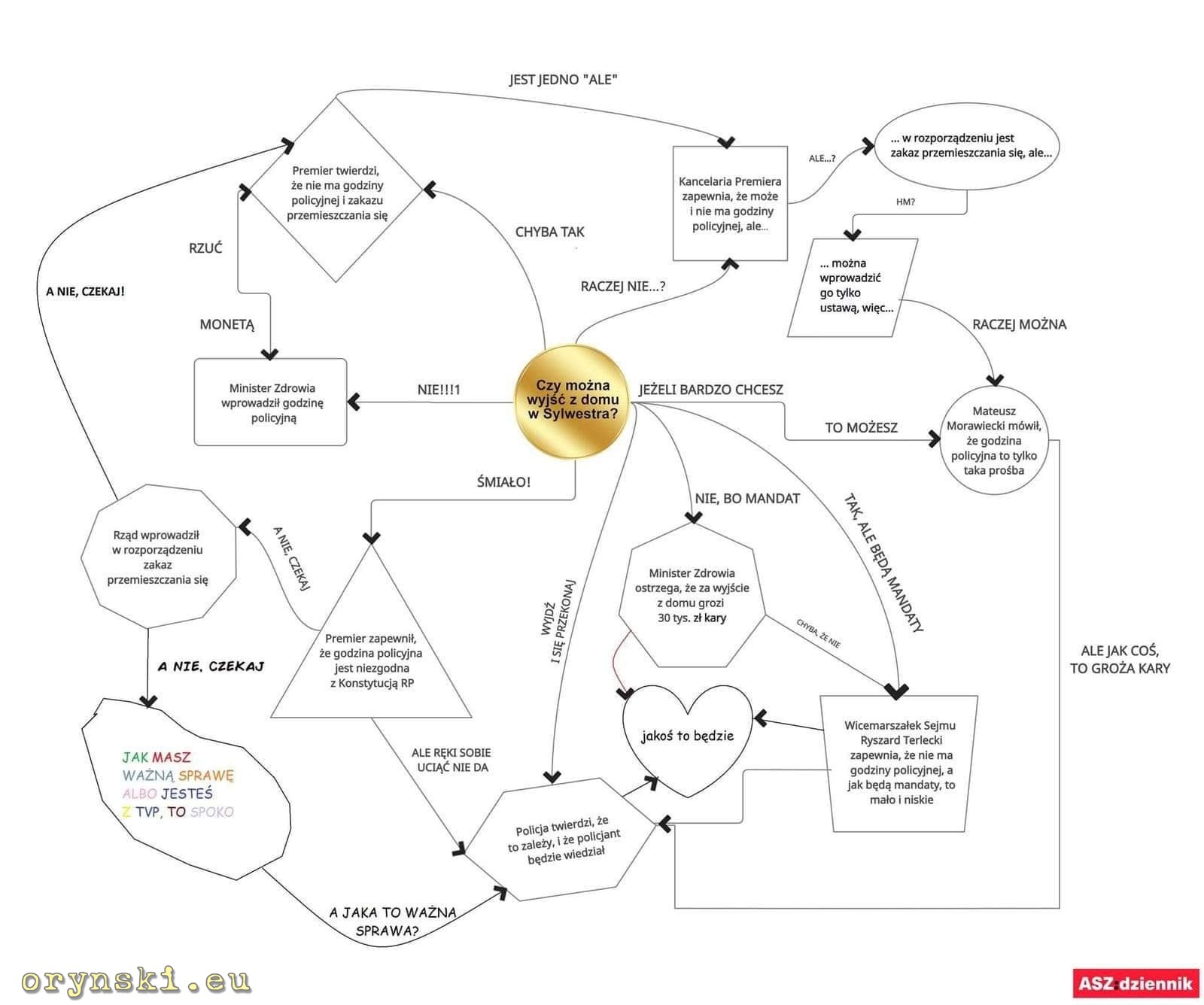 If only there was a national, public TV, controlled by the government, that would be able to explain to people what they should and should not do on New Year’s Eve? Luckily, there is one. TVP was making everything to tell people they should stay at home and watch TVP. Unless they were working on that show – as technicians, artists, extras, and whatnot, then they were even provided with an exemption from the law, in case it was actually to be observed by any chance. For the two days, TVP was full of promises of how cool their New Year’s Eve show will be. Some were pointing out, that organizing a huge live show might not be the greatest thing to do in the middle of the pandemic. But Kurski himself went to TVP and assured viewers that “News Years Eve program on TVP is just essential service like electricity, gas, water – essential service that needs to be delivered to every Polish home. Poles need it to live – like food, like air to breathe…”. The hype built by TVP sounded as if they need a smokescreen to hide something, and who knows – maybe it was true. On the last day of the year a bank owned by Leszek Czarnecki: Idea Bank has been swallowed by another, state-controlled bank. In simple words, stolen. Would the fact, that PiS controlled financial instiutions made Czarnecki corruption offer a few years back, which he not only refused but also recorded them and made that recording public? Back then, he was threatened with exactly what had happened today – the new laws will force his bank to capitalize further, and if he fails to achieve that, it will have to end under state control for “forced restructuration”…

But at least while everyone was busy with everything, New Year’s Eve went pretty unnoticed. Some people report being completely ignored while walking at night, elsewhere – like on the expressway between Tychy or Katowice, police has stopped every single vehicle under the pretext of sobriety check which had exceptionally big attention to writing down all the people in the cars, the cars number plates and all information possible…

And the new year started with a big bang as well: the program of COVID vaccination is on. And it is going just as well, as you would be expected… in Poland.

So, basically, it has emerged that famous actress Krystyna Janda along with some of her friends, colleagues, and family skipped queue to get vaccinated before all nurses, doctors and other people at risk received their doses. When it became known, and the public outrage began, she confirmed it on her social media “Yes I am one of the people vaccinated in order to promote vaccinations. I am very happy with that as I was in the risk group”. The hospital followed confirming that it had received extra 18 doses for famous celebrities so they can be vaccinated first in order to promote the vaccinate program. They failed to explain why celebrities have to be vaccinated in order to promote vaccinations: when Janda was promoting a flu medicine, did she had to get the flu and then cure it with it first? The government quickly denied that there was ever a special batch of vaccines for celebrities, so Janda’s new tune was that “the vaccines would go to waste anyway”, just like Janda’s daughter, who just happened to pass by the office of a desperate doctor, who had a vaccine dose opened and nobody around to inject it into, so she heroically agreed to take one for the team.

Meanwhile, the celebrities who got their vaccines out of order, from what we know so far, tend to be friends of Janda and, just as her, outspoken critics of PiS. I am pretty sure if PiS wanted to use some celebrities to promote vaccines, they would ask to participate in the program their “own” stars, such as disco polo singer Zenek Martyniuk for example. Also, we still don’t know the full list of the vaccinated celebrities, apparently, it’s secret. I fail to see how they were supposed to promote vaccines if they don’t want to go public and say they took the dose.

Of course, PiS is doing the most by attacking Janda and her friends for skipping the queue. In response, Janda fans and a big part of the opposition, mostly of the older generation, defend her, saying that people, mostly of the younger generation, who criticize her for skipping a queue to the vaccine are “useful idiots unknowingly participating in PiS-driven hate campaign against the famous actress who dared to criticize PiS” and that it was all an elaborate provocation by PiS in order to compromise Janda. What the older generation seems to be unable to comprehend is that the younger people don’t care about Janda’s political views: they criticize her actions, because they are wrong. The fact that young people are fed up with cronyism in Poland gives me some hope for the future…