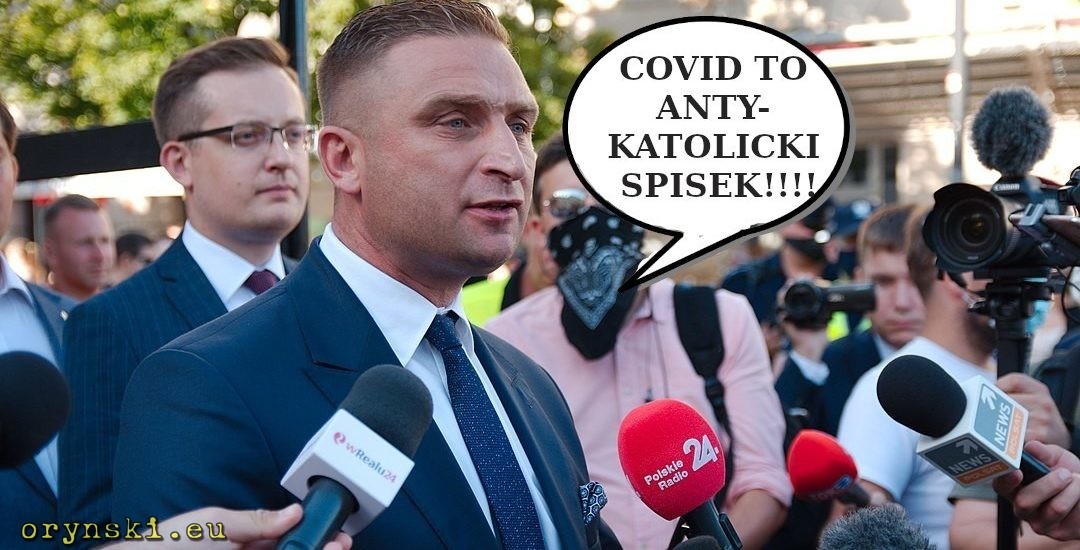 One of the leaders of Polish extreme right, Robert Bąkiewicz, asks on Twitter: “There is a certain time correlation. ‘Incidentally’ the peaks of the pandemics come always around the most important Catholic holidays. Does someone want de-Christianisation of Poland”? Well, I for one, would welcome the de-Christianisation of Poland with open arms. And I am pretty sure I am not the only one. But let’s leave that aside for the moment.

I think Bąkiewicz might be up to something here. I can see why there would be a correlation between Catholic holidays and the sudden rises in coronavirus infections. Bishops still claim, that “closing the source of the spiritual and physical healing is nonsense”. And the government seems to agree with that, as with the country coming back under, at least in theory, strictest lock-down, the churches are still an exemption. The minister of health, who has no time to meet the young doctors working on the front line of the pandemic effort, has plenty of time to meet bishops and discuss the level of the restriction acceptable for the churches with them. And of course, even those compromise restrictions agreed by the minister with the bishop (despite the fact, that the concordat makes it perfectly legal for the government to close churches in the interest of public safety) are very often ignored by the local priests. In Nowy Sącz the local parish went so far as to doctor the broadcast of the Holy Mass in their local church, so it does show empty benches. I am afraid they will hardly have a chance for an Oscar in special effects though, see for yourself:

In another church, a woman, who asked a priest why he does not react to the fact that many people don’t wear masks was removed from the church. Ironically, this was a funeral mass for her friend, a COVID-19 victim. Apparently, the priests and the faithful still believe father Tadeusz Guz, a professor of Catholic University in Lublin, who claimed last year that since the priest’s hands are consecrated, and also washed during the mass, his hands are clear both in a medical and spiritual sense, so he won’t spread any viruses, because he’s holy. Shows how much those degrees from Catholic Universities are worth. Because, of course, it’s bullshit. Last week I mentioned the case of the parish where every single priest turned to be infected with COVID. This week it has emerged that the priest from the parish in Czudec (the one, where the citizen who reported breaking the rules in the church to the police, and become a victim of harassment by his fellow parishioners, and also got himself in trouble with curia – see more here) has also become sick with coronavirus and his condition is serious. His vicars ask for prayers, but will that work? I doubt so, and I have scientific research to quote on this. A couple of Polish academics conducted research to see if the prayers for bishops health brings any positive results. Apparently bishops, for whose health the whole dioceses pray live only slightly longer than ordinary priests, for whom only the local parish pray (although we have to remember their lives are much more luxurious than lives of priests) and there is no visible difference between the lifespans of the bishops and academic teachers (who are, quite often atheists and in most cases nobody prays for them).

So when crowds of mask-less people participated in the Extreme Way Of The Cross lasting all night and spanning 43 kilometres, this year this was something extreme in more than one way. Because the bottom line is that participating in religious events during this dramatic pandemic situation might be an extreme activity.

Especially when the health system has been collapsing again. As of Sunday, 28th of March, in the whole district of Mazowsze (the one with Warsaw in it) there is not a single respiratory machine left for COVID-19 victims. The ambulances circulate for hours, trying to find ANY free bed in a hospital for their patients. The doctors are fed up and don’t hide it. A sarcastic epicrisis circulated the social media. It says “A patient with COVID-incurred pneumonia has been admitted to the neurosurgical ward. He has no neurological symptoms, but by the order of the Minister of Health, the neurosurgical staff magically possessed complex internist expertise. During his stay an increase of the breathing difficulties has been observed, the patient with consciousness disturbances has received AIRVO treatment got better, but could not be transferred to pulmunological ward as, despite the fact that the pandemic lasts over a year now, there still aren’t safe procedures to transfer patients relying on AIRVO”. And as per recommendation, the doctor wrote “The patient does not require neurosurgical treatment (…) and it would not be wise for a neurosurgeon to provide internist recommendation”.

The vaccination program is not much better. The organization is terrible. In Wrocław a crowd of 200 people turned up for vaccination at the same time, as it turned out that despite each patient has been provided with exact time, the vaccines are served on the “first come, first served” basis. The elbows and kicks got activated as people were fighting to get into the, already overcrowded, vaccination station. Some of the patients gave up, as they considered mixing with such a crowd too risky. “I was doing everything to protect myself for over a year. Now I came to get vaccinated and I found myself in the eye of the storm” – said one patient.

So what is the government doing? Setting up the smokescreen. The new topic for the government media are connections between Roman Giertych and anti-government social media activists. This story might actually cause some waves, but not in the way PiS intended: TVP illustrated their propaganda material on that topic with the private conversation between Giertych and the activist, and this is the ultimate proof that the Central Anti-Corruption Bureau leaks the investigation material to TVP. And in this case, since the arrest of Roman Giertych was deemed to be illegal by the court and the investigators were ordered to return all data storage and electronic devices to him without looking into them, the fact that TVP is in possession of his WhatsApp messages proves, that this court ruling was not observed…

But Giertych can be sure of two things:
– nobody will investigate the breach of his privacy
– PiS will continue digging around him until they’ll find something for which they could make him face court.

This is what they did to judge Waldemar Żurek, another fierce critic of PiS judicial reforms. After 5 years of investigation, they discovered, that back in 2014 he hasn’t paid 820 zł of tax on a 37-year-old skidder machine he used to do some forestry work on his land. He was never asked to pay it (as the tax is on-road vehicles, and the machine was not road going) and even if he had to pay it, the taxman claim would be already expired. The files on that case swelled to 170 pages, the prosecutors tried to summon to Warsaw the man, who purchased the skidder from the judge (after he found, that the machine is actually too big for his needs), checked carefully his finances to ensure, he had the means to buy this machine and investigated if the judge has built his house according to the building permits. Finally, nothing was found out of order but even despite the fact that the tax office’s opinion is that the tax is not required in that case, Żurek will face disciplinary charges for “behaviour inconsistent with the dignity of a judge” (I would like to use that opportunity to remind everyone, that Jarosław Kaczyński despite serious corruption accusation hasn’t been even interviewed by the prosecutors).

But I guess judge Żurek’s case is to serve as a warning for others. Judges need to know their place. After all, the government is bringing more and more political cases, and they have to know how to rule. For now, those are just things of minor importance, as a recent wave of the people facing charges for offending the president. This crime is punished with up to three years in prison. Apart from the case of the writer Jakub Żulczyk who called the president an idiot, just recently a woman who shouted “fuck Duda” during one of his election rallies who was found guilty (but not punished) of that crime (incidentally in another case the police has been found guilty for acting excessively by illegally detaining her). In other courts three schoolboys who defaced his election poster and recorded it on their mobiles face the same charge.

There is also a case of Oko.press reporter, who might face charges of “using violence or threats in order to force other people to do something”. What he did? He approached PiS politician and judge of the facade Constitutional Tribunal Krystyna Pawłowicz on the street asking her for comment on the new anti-abortion ruling. He has not been formally charged yet, but he was interviewed “as a witness – for now”. This is actually yet another example of PiS bending the law to strip people of their rights: if you are interviewed as a suspect, you have the right to refuse to provide information that could incriminate you. But if you are interviewed as a witness, you have to say everything that is requested of you under criminal liability. So this is a tactic of PiS controlled prosecutors: they call you in as a witness and then use your statements to charge you…

And I am afraid that the protection of the “good name of president Andrzej Duda” (if there is such a thing at all) is just the warm-up to put judges in line before more serious things to come. The Catholic radicals are proposing the new law, in which abortion will be equal to murder. Even miscarriage could be punished if the prosecutors could prove that the expecting mother was “not careful enough”. Apparently, according to the proponents of the new bill “killing the weakest members of the society ruins the foundation of the Republic of Poland” and opening the country to children “will lead to economical progress, and in longer perspective to prosperity”.

Yeah, right. That’s why the Central American Republic of El Salvador, the only country with equally drastic anti-abortion laws, is known for being a prosperous country, free from crime and poverty when the women and children can live happily. Forget Lech Wałęsa seeing Poland’s future as “Second Japan”, forget Donald Tusk promising to build a “second Ireland” on the banks of Vistula, forget even Jarosław Kaczyński who dreamed about having “second Budapest in Warsaw”. Second San Salvador, this is what we aspire to from now on!

This piece was published in Britské Listy
Picture of Robert Bąkiewicz: Nicole Wójcik (CC 4.0 via Wikipedia)